Over the past couple of weeks, I’ve reported on the case of Jodi Shaw, the employee of Smith College who was driven out for making YouTube videos about Smith’s climate of toxic racial divisiveness—a climate that affected her personally.  Shaw turned down Smith’s offer of a financial settlement in return for Shaw’s silence, and started a GoFundMe campaign to keep her and her two kids alive since she doesn’t have a job. The money will also go for a lawsuit against Smith and to help other Smith students.  The campaign has raised nearly $241,000—$90,000 over its original goal (Smith says she’ll use any excess over $150,000 “to help others exercise their right to be free from a hostile work environment”).  To me, this quick and generous response means that there are a lot of people out there (not all of them Republicans!) who share Smith’s worries about the infusion of Critical Race Theory into colleges. Smith College appears to be a particularly toxic example of that infusion.

Rolling Stone published a snarky attack on Shaw, which is short on facts (it completely neglects the atmosphere of Smith reported in detail in the New York Times article below), and paints Shaw as a “cancel culture martyr.” The hit piece, which you can read by clicking on the screenshot below, ends this way:

Fortunately for Shaw, she appears to have gotten her money’s worth: a fundraiser to help her with living expenses has raised more than $214,000, proving that one of the quickest routes to success in the age of social media is to publicly and dramatically claim you’ve been canceled.

I highly doubt that Shaw went through all this tsouris to become a martyr and to gain “success in the age of social media.” Rolling Stone‘s reporting is both inaccurate and execrable, and we’ll move on. 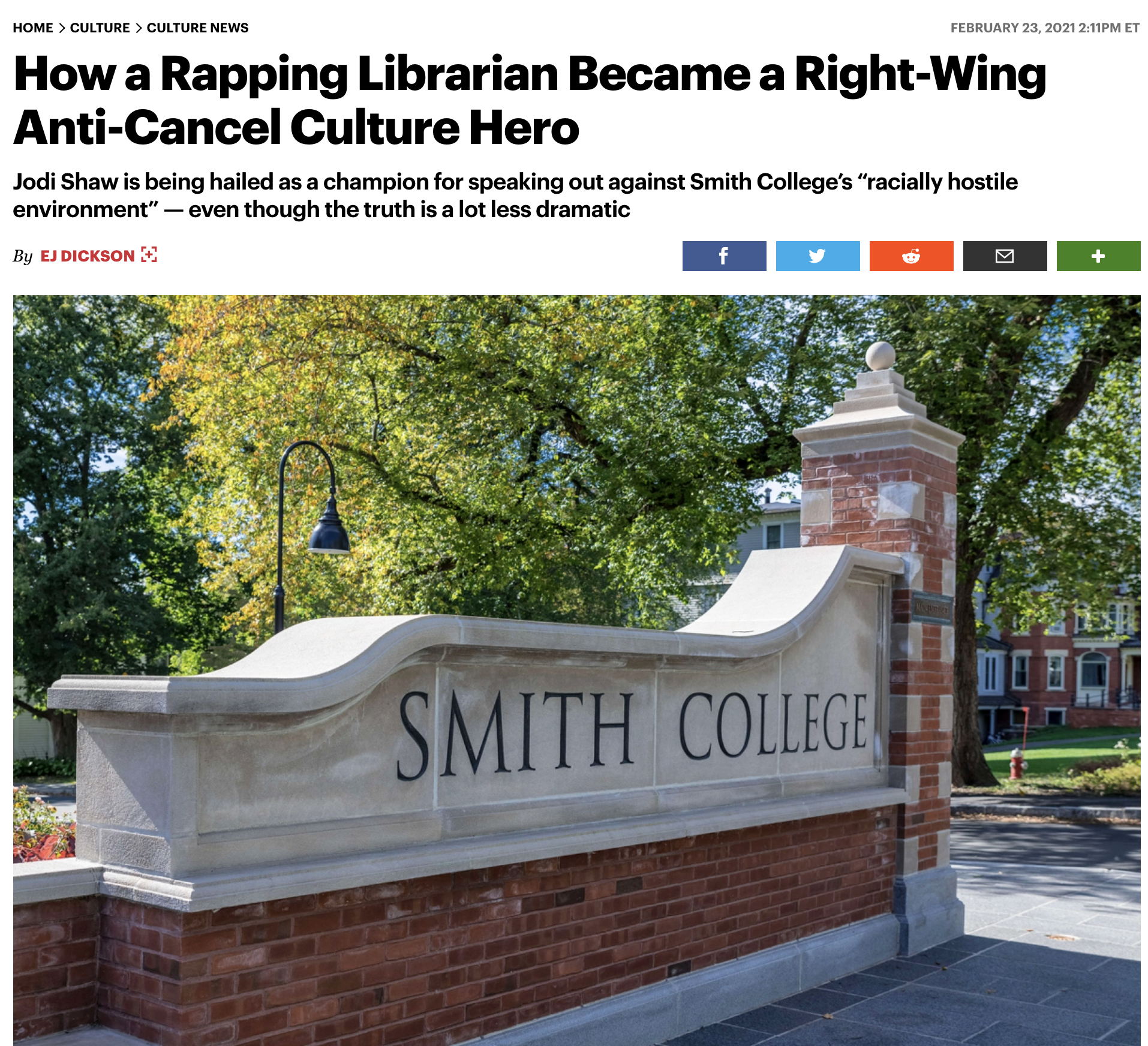 I’m amazed that the New York Times covered the story not just of Jodi Shaw, but of the fulminating racial toxicity at Smith, which of course was the reason Shaw was exposed to the “racial sensitivity training” that started the whole incident. And the Times’s story is long, complete, and fair. It pulls no punches when it comes to describing Smith’s toxic atmosphere. But it also paints a dire picture of Kathleen McCartney, Smith’s President, who is wedded to Critical Race Theory, apparently out of fear of pushback from the students. I’m not going to call for McCartney’s resignation, as that is something I have no power over, but I think that the present furor, including a letter in the Paper of Record about what’s really going on at Smith, might hasten her departure.

Read the longish NYT article by clicking on the screenshot.

This is the story’s dramatic “lede”:

This is a tale of how race, class and power collided at the elite 145-year-old liberal arts college, where tuition, room and board top $78,000 a year and where the employees who keep the school running often come from working-class enclaves beyond the school’s elegant wrought iron gates. The story highlights the tensions between a student’s deeply felt sense of personal truth and facts that are at odds with it.

As I thought, and as Shaw has said repeatedly, Smith is ridden with racial tension. And it didn’t have to be that way. It all went back, as the article describes, to a 2018 claim of racism by Ouou Kanoute, a black firstfirst-generation student whose parents immigrated from Mali. In the summer of that year, Kanoute went to get lunch in a cafeteria that was restricted to participants in “a summer camp program for young children.” Kanoute wasn’t supposed to be using the cafeteria because she was a student worker—a teaching assistant. One cafeteria worker

. . . mentioned that to Ms. Kanoute when she saw her getting lunch there and then decided to drop it. Staff members dance carefully around rule enforcement for fear students will lodge complaints.

“We used to joke, don’t let a rich student report you, because if you do, you’re gone,” said Mark Patenaude, a janitor.

Kanoute then took her lunch and went into the lounge of an empty dorm closed for the summer. Nobody was supposed to be in that dorm, and janitors and others were told to call security if they saw anybody there. A 60 year old janitor saw Kanoute and made that call. A security worker came, recognized Kanoute, and left. And that was it. No mention of race was made by anybody, including the janitor reporting Kanoute’s presence.

It would have ended there had Kanoute not used social media to claim that she was persecuted because she was black. (Kanoute’s behavior over the past few years makes her seem a tad unhinged.)  And then things went to hell.  The janitor was put on leave, the cafeteria worker persecuted and harassed by both President McCartney and the students, and McCartney, stung by her own missteps in the past, put the campus on Full White Supremacist Alert:

Smith College officials emphasized “reconciliation and healing” after the incident. In the months to come they announced a raft of anti-bias training for all staff, a revamped and more sensitive campus police force and the creation of dormitories — as demanded by Ms. Kanoute and her A.C.L.U. lawyer — set aside for Black students and other students of color.

. . .Ms. Blair [the cafeteria worker] was reassigned to a different dormitory, as Ms. Kanoute lived in the one where she had labored for many years. Her first week in her new job, she said, a female student whispered to another: There goes the racist.

Anti-bias training began in earnest in the fall. Ms. Blair and other cafeteria and grounds workers found themselves being asked by consultants hired by Smith about their childhood and family assumptions about race, which many viewed as psychologically intrusive. Ms. Blair recalled growing silent and wanting to crawl inside herself.

The faculty are not required to undergo such training. Professor Lendler said in an interview that such training for working-class employees risks becoming a kind of psychological bullying. “My response would be, ‘Unless it relates to conditions of employment, it’s none of your business what I was like growing up or what I should be thinking of,’” he said.

That’s exactly what Jodi Shaw experienced, and also thought was “none of anybody’s business.”

Note that the ACLU (American Civil Liberties Union) stepped in to defend Kanoute. But then Smith College hired a law firm to produce an independent report on the incident, and it came up with. . . no evidence of racism:

The New York Times, The Washington Post and CNN picked up the story of a young female student harassed by white workers. The American Civil Liberties Union, which took the student’s case, said she was profiled for “eating while Black.”

Less attention was paid three months later when a law firm hired by Smith College to investigate the episode found no persuasive evidence of bias. Ms. Kanoute was determined to have eaten in a deserted dorm that had been closed for the summer; the janitor had been encouraged to notify security if he saw unauthorized people there. The officer, like all campus police, was unarmed.

You’d think that would be the end of the story, right? Wrong!  For now there is a narrative of racism, as John McWhorter points out, and it’s a narrative that has to be kept going regardless of whether there is real racism at all. And so President McCartney hasn’t done a thing to foster reconciliation or healing. Instead, she just brings up the “feelings versus facts” trope, as well as the discredited trope of “implicit racial bias”:

Still, Ms. McCartney said the report validated Ms. Kanoute’s lived experience, notably the fear she felt at the sight of the police officer. “I suspect many of you will conclude, as did I,” she wrote, “it is impossible to rule out the potential role of implicit racial bias.” [JAC: If you can’t rule it out, because it’s impossible to dig into someone’s unconscious, then it must be racism!]

The report said Ms. Kanoute could not point to anything that supported the claim she made on Facebook of a yearlong “pattern of discrimination.”

Ms. McCartney offered no public apology to the employees after the report was released. “We were gobsmacked — four people’s lives wrecked, two were employees of more than 35 years and no apology,” said Tracey Putnam Culver, a Smith graduate who recently retired from the college’s facilities management department. “How do you rationalize that?”

(Remember, this is from the New York Times!) Smith’s and McCartney’s behavior is reprehensible. Were I a Smith alum, or a donor, I’d be appalled at how McCartney’s acted. What kind of President is this?

But the ACLU has behaved just as badly. As we know, the ACLU is going off the rails these days, and when an organization like that can’t even admit the truth, and has also has bought into a racial narrative that it must defend, you get something like this:

Rahsaan Hall, racial justice director for the A.C.L.U. of Massachusetts and Ms. Kanoute’s lawyer, cautioned against drawing too much from the investigative report, as subconscious bias is difficult to prove. Nor was he particularly sympathetic to the accused workers.

“It’s troubling that people are more offended by being called racist than by the actual racism in our society,” he said. “Allegations of being racist, even getting direct mailers in their mailbox, is not on par with the consequences of actual racism.”

That is, let three lower-middle-class people be thrown to the wolves by Smith. What does it matter if the narrative of structural racism at Smith (which does NOT exist) be kept alive? There’s always that “subconscious bias” that is “difficult to prove”!

A few Smith faculty are quoted as opposing what McCartney and the College have done, but they are crying in the wilderness. It’s up to the College’s trustees and alumni to let President McCartney know that “lived experience,” if it doesn’t correspond to the truth, cannot be allowed to ruin people’s lives or to create a toxic climate in a formerly respected college.  In the end, Kanoute’s acts and false cries of racism have come down to ruin Jodi Shaw’s life as well.

68 thoughts on “Smith meltdown: NYT reports honestly, for once (but Rolling Stone doesn’t)”