As I’ve said before, I find Glenn Greenwald a mixed bag, but it’s worth checking his Substack site to see what he has to say. This week’s column is a critique of the Democrats’ new drive to single out media venues as a possible way of suppressing conservative speech. The fight between government and social media/regular media is not something I follow regularly, but Greenwald does, and he’s angry about the use of government to intimidate those who provide news. He’s not particularly concerned about regulating news as being “fake” because, he says, authoritarians have always used the excuse of “fake and harmful news” to suppress their opponents.

Click on the screenshot to read: (it’s free, but you should consider subscribing if you read often):

Democratic intimidation, says Greenwald, has taken several forms: calling people like Zuckerberg before Congressional committees (three times in less than three months), a hearing that started yesterday before part of the House Energy and Commerce Committee called “Fanning the flames: disinformation and extremism in the media,” and the fact of House Democrats sending letters to the nation’s largest cable companies (Comcast, Verizon, etc.) and to distributors like Amazon, Apple, and Google, with a list of demands. I have to say, this list is pretty heavy-handed: 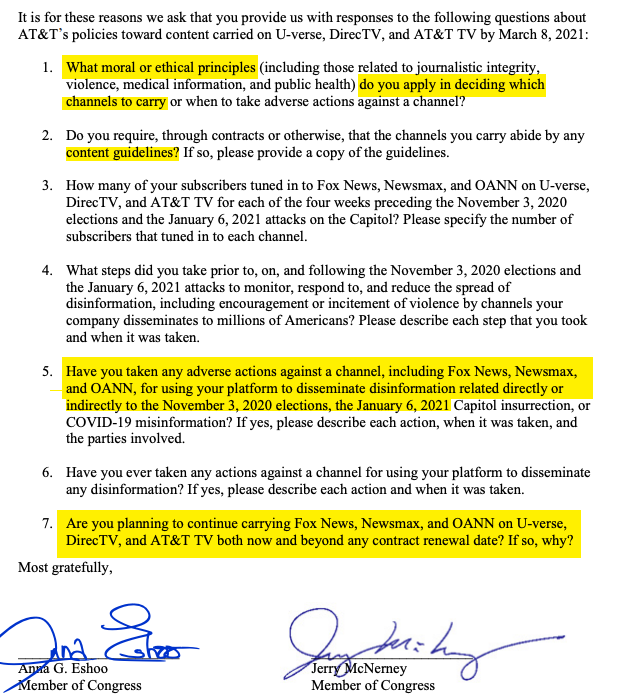 But you say that these companies are damaging the country by promulgating “fake news” (invariably conservative news)? Here’s Greenwald’s response:

The way Democrats justify this to themselves is important to consider. They do not, of course, explicitly acknowledge that they are engaged in authoritarian assaults on free speech and a free press. Not even the most despotic tyrants like to think of themselves in that way. All tyrants concoct theories and excuses to justify their censorship as noble and necessary.

Indeed, the justifying script Democrats are using here is the one most commonly employed by autocrats around the world to silence their critics. Those they seek to silence are not merely expressing a different view, but are dangerous. They are not merely advocating alternative ideologies but are destabilizing society with lies, fake news, and speech that deliberately incites violence, subversion and domestic terrorism.

In her boastful posting, Rep. Eshoo says her efforts targeting these cable outlets are necessary because “misinformation on TV has led to our current polluted information environment that radicalizes individuals to commit seditious acts and rejects public health best practices, among other issues in our public discourse.” This is the rationale invoked by virtually every repressive state to imprison journalists and ban media outlets.

The Democrats sound a great deal like the Egyptian regime of Gen. Abdel el-Sisi. Just two weeks ago, Sisi’s regime finally released an Al Jazeera journalist who had been imprisoned for four years based on accusations that he had “spread false news” and was guilty of “incitement against state institutions and broadcasting false news with the aim of spreading chaos.” Sound familiar? It should, since that is precisely what House Democrats are saying to ennoble their multi-pronged assault on free expression.

And, avers Greenwald, it’s not like liberals don’t pollute the waters with fake news:

Are there conspiracy theories and disinformation sometimes found on the conservative cable outlets which House Democrats want taken off the air? Of course there are: all media outlets disseminate conspiracy theories and fake news at times. MSNBC and CNN spent four years endorsing the most deranged conspiracy theory imaginable, one with very toxic roots in the Cold War: namely, the McCarthyite script that the Kremlin had taken over control of key U.S. institutions through sexual blackmail over the President, invasions into the nation’s heating system and electric grid, and criminal conspiracy between Moscow and the Trump campaign to hack into Democrats’ emails.

He shows a screenshot: 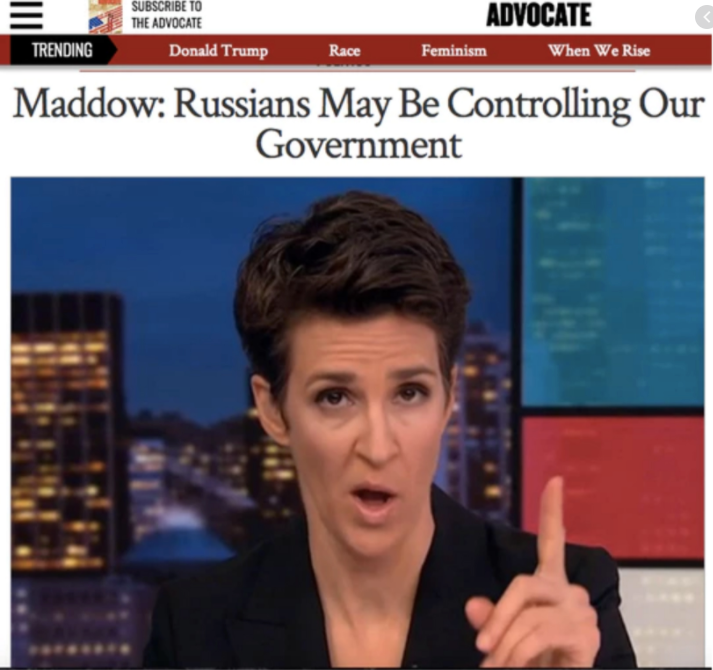 So what’s Greenwald’s solution? Let the companies say whatever they want? (This would be close to my solution, so long as what they say doesn’t transgress the First Amendment.) But he offers another palliative, and one that, if you’ll forgive me, doesn’t seem very workable:

. . . as much as I loathe so much of what those outlets do, it is not the role of the government to regulate let alone silence them. The corrective is for journalists to rebuild trust and faith with the public by exposing their misinformation and proving to the public that they will do accurate and reliable reporting regardless of which faction is aggrandized or angered.

He’s right about the government keeping its hands off the press, but do journalists really have any desire or incentive to rebuild public trust and faith by exposing information? I don’t see that happening with either the Right- or Left-Wing media (I’m not as familiar with the Right, as I don’t read them so much, but who at the New York Times is policing the paper? Not the executive editor, that’s for sure!)

Some readers won’t like Greenwald’s comparison in the last paragraph, but, like Rod Serling, I submit it for your approval:

But corporate media outlets and Democrats (excuse the redundancy) who spent the last four years posturing as virulent defenders of press freedoms never meant it. Like so much of what they claimed to believe, it was fraudulent. The proof is that they are now mute, if not supportive, as Democrats use their status as majority party to launch an assault against press freedoms far more egregious than anything Trump got close to doing.

As I said, this isn’t exactly an area I follow, so I’d be especially interested in readers’ comments. Are the Dems hypocrites in this respect?