Whatever happened to Maru? Well, the pudgy Japanese Scottish Fold cat has his own Wikipedia page, which informs us that his owner, “mugumogo”, has adopted to additional cats: Hana in 2013 and Miri in 2020. Maru is now 13—a Senior Cat—and still loves to climb into boxes of any size.

I used to love watching Maru videos (he’s the most-watched animal on the Internet), and don’t know why I haven’t lately. Fortunately, an alert reader reminded me, and here are two newish videos. The first one features Miri playing with Hana and Maru getting into a decrepit box (or rather crushing it).  Maru then squeezes into a plastic bucket, and he’s sticking out a lot!

Here playful Kitten Miri watches Maru execute a tricky forward roll into a narrow plastic container. She then apes her older brother, doing her own forward roll. I swear, Maru’s penchant for squeezing into tiny containers must bespeak some fundamental insecurity, like Linus’s need for his blanket.

CAT SCIENCE! The article below reports on a 2020 paper in Animal Behavior and Cognition paper that purports to test whether your cat would favor someone observed to help you (opening a jar) over someone who refused to help you. (Sample size: 36 moggies.) Previous work showed that dogs favor the helper. Unsurprisingly, cats don’t. DUH!

Then, both strangers offered the cat a treat, and the scientists watched to see which the cat approached first. Did she prefer to take food from a helper over a passive bystander? This would indicate a positivity bias, showing the helpful interaction made the cat feel more warmly towards the stranger. Or did she avoid taking food from the non-helper? This negativity bias might mean the cat felt distrustful.

When this method was used to test dogs, they showed a clear negativity bias. The dogs preferred not to take food from a stranger who refused help to their owner. In contrast, the cats in the new study were completely indifferent. They showed no preference for the helpful person and no avoidance of the unhelpful person. Apparently, as far as cats are concerned, food is food.

There’s also a summary in Gizmodo, which adds a possible reason:

Dogs have been in humanity’s orbit longer than cats, for one. And even before we started teaming up to tackle common goals, dogs’ ancient ancestors were thought to frequently cooperate with one another to hunt and survive. Cats, as the researchers politely put it, “originated from a less gregarious ancestor than did dogs,” and we haven’t bred or trained them to perform specific tasks with us anywhere near as much as we have with dogs.

Many readers sent me articles about how the Thai navy rescued four ginger cats that were marooned on a sinking ship. It was a lovely thing to do, and is described in the PuffHo article below, as well as by  the BBC and The Washington Post.

Four cats were marooned on a sinking and burning boat. Several days before that, the sailors had been rescued, but the bastards left four cats behind. No worries, though, the Thai Navy to the rescue!

Wide-eyed and panicked, the felines huddled together. When the help they so desperately needed arrived, it came in the form of a 23-year-old sailor and his team of Thai navy officials.

In what can only be described as the purr-fect rescue mission, the sailors said they had approached the capsized vessel in a bid to check for oil spills but soon noticed the animals were on board.

“I used my camera to zoom in to the boat, and I saw one or two cats popping their heads out,” explained First-Class Petty Officer Wichit Pukdeelon of the navy’s air and coastal defense division. 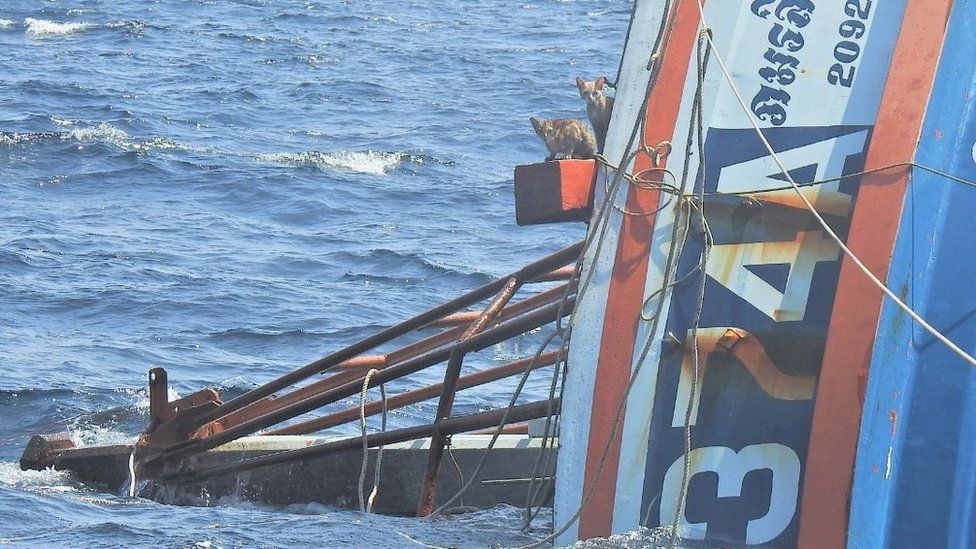 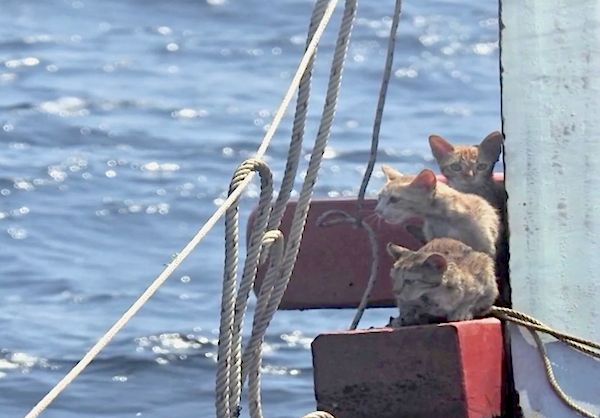 Wide-eyed and panicked, the felines huddled together. When the help they so desperately needed arrived, it came in the form of a 23-year-old sailor and his team of Thai navy officials.

In what can only be described as the purr-fect rescue mission, the sailors said they had approached the capsized vessel in a bid to check for oil spills but soon noticed the animals were on board.

“I used my camera to zoom in to the boat, and I saw one or two cats popping their heads out,” explained First-Class Petty Officer Wichit Pukdeelon of the navy’s air and coastal defense division.

According to local media, crew members of the capsized boat were rescued by a passing ship on Tuesday, but somehow the four cats had been left behind.

Knowing they had to move fast to save the abandoned animals, Thatsaphon Saii jumped into the ocean, battling strong currents. After paddling some 50 feet to reach the boat, Saii was captured on camera swimming the animals to safety — with one of the cats perched delicately upon his back as he returned to his crew, who were on standby with a rope.

“I immediately took off my shirt and put on a life jacket so I could jump into the sea. The flames were at the back of the boat, but it was starting to sink, so I knew I had to be quick,” he recalled, adding that he was “so relieved” that the navy had been able to rescue the cats.

Look at this guy saving a kitty. He deserves a medal! Apparently he made four trips to the boat.

The group were swiftly branded “heroes” after footage of the incident circulated widely on social media, with the young sailor in particular causing a stir among animal lovers online.

Many embraced the pawsitive news amid the bleakness of a the coronavirus pandemic.

“This made my week,” wrote one user on Twitter. “Good things can happen,” wrote another.

Once back at the navy’s official command post, the cats were wiped down and dried off with towels and fed by their rescuers, who cradled them, played with them and posed for photographs alongside their new furry friends, who now have a very global fan base.

There are videos at the BBC and HuffPo; here are two screenshots: 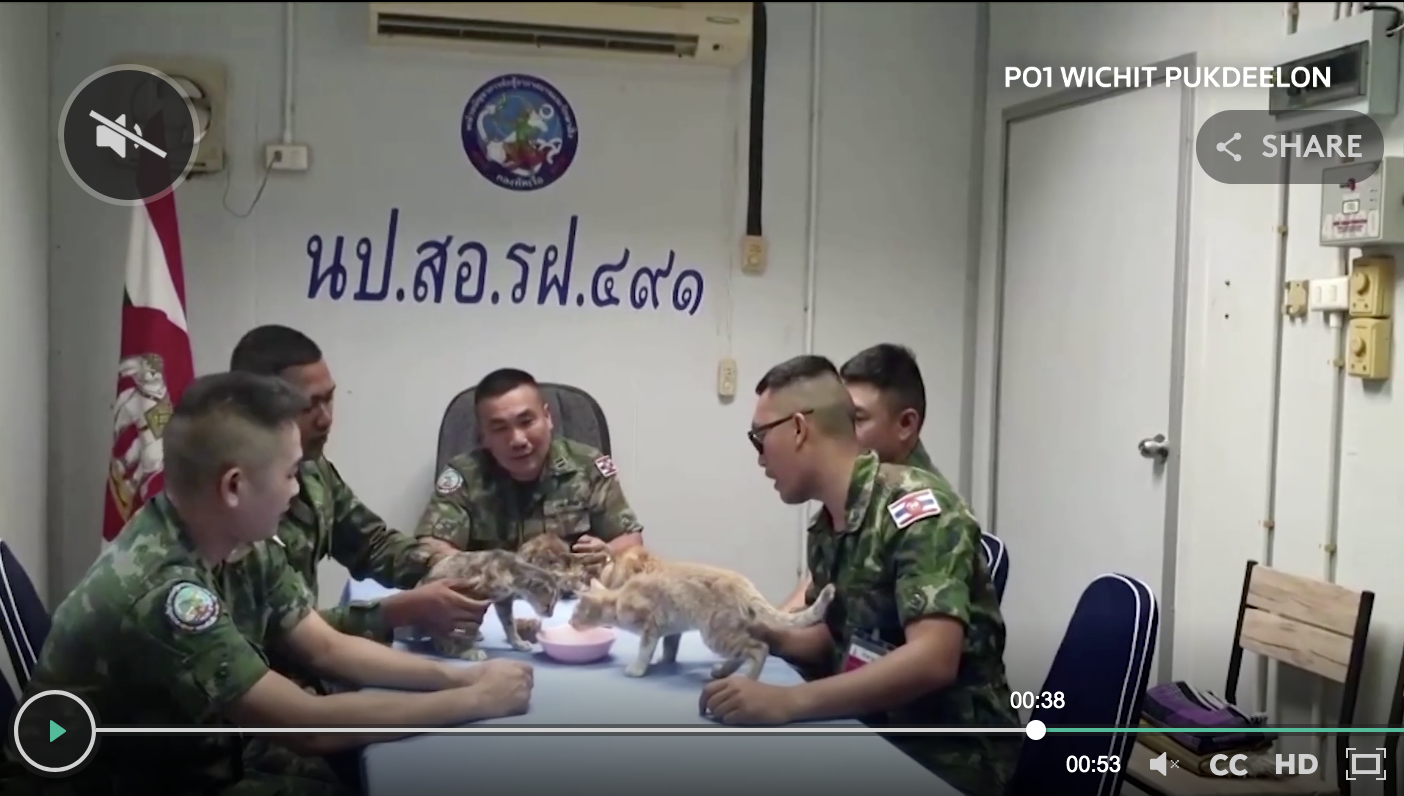 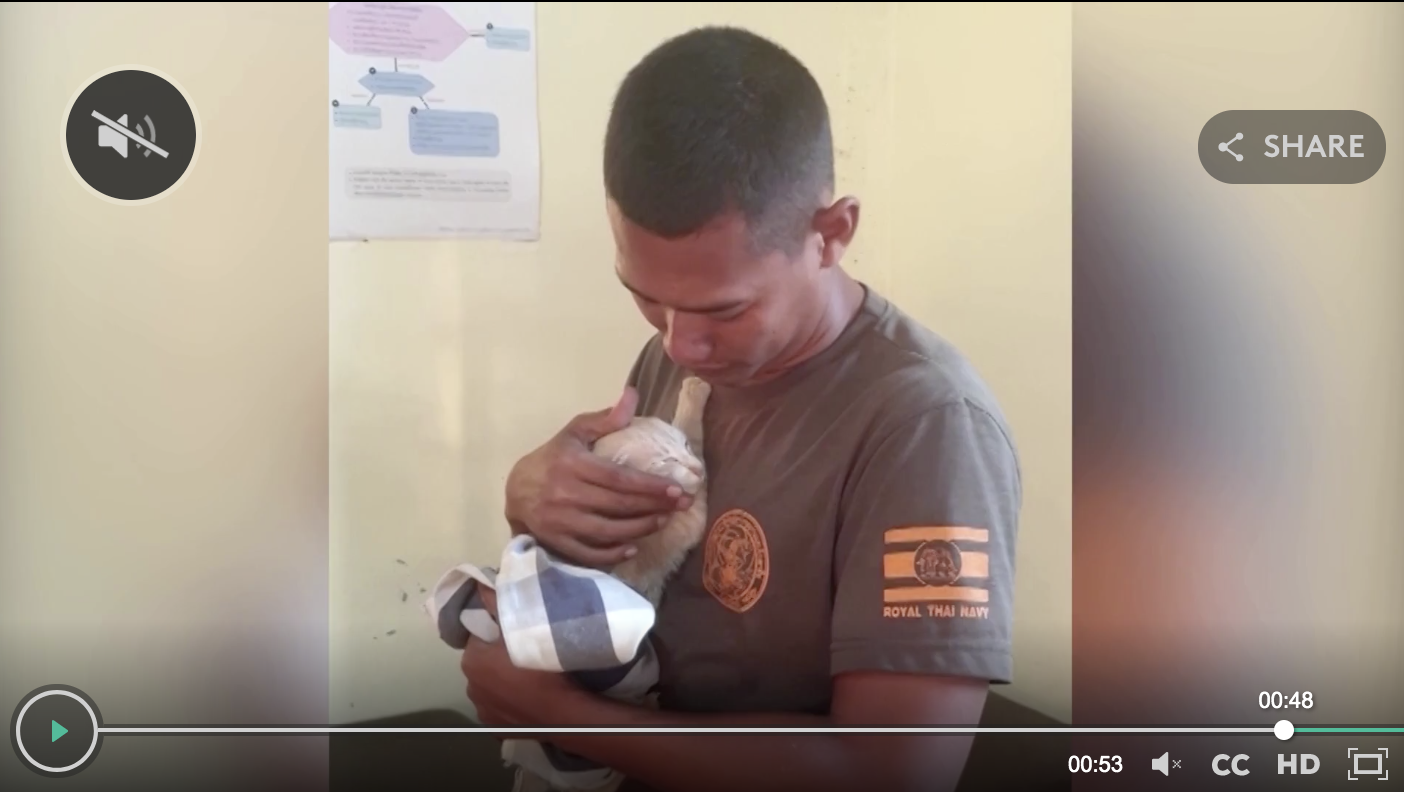 There are two questions to be answered? Why do cats sleep in bed with you? (Mine always did.) And why do they sleep at the foot of the bed? There are speculative answers at the article below, masquerading as demonstrated truths.