I guess today is Substack Day. I was going to write about John McWhorter’s latest post, dealing with the ludicrousness of canceling Amanda Gorman’s translators because they don’t match her ethnicity (see my posts here and here), but that’s too much about race in one day.

Instead, Bari Weiss has posted some takes on recent books she’s read, as well as confessing her pleasures (taking baths, reading) and skills (making pasta and Negronis). Re the reading, she gives a list of the books she’s liked a lot, and I’ll list those and perhaps give a few of her quotes. Click on the screenshot; access is free, but you should subscribe if you read regularly: 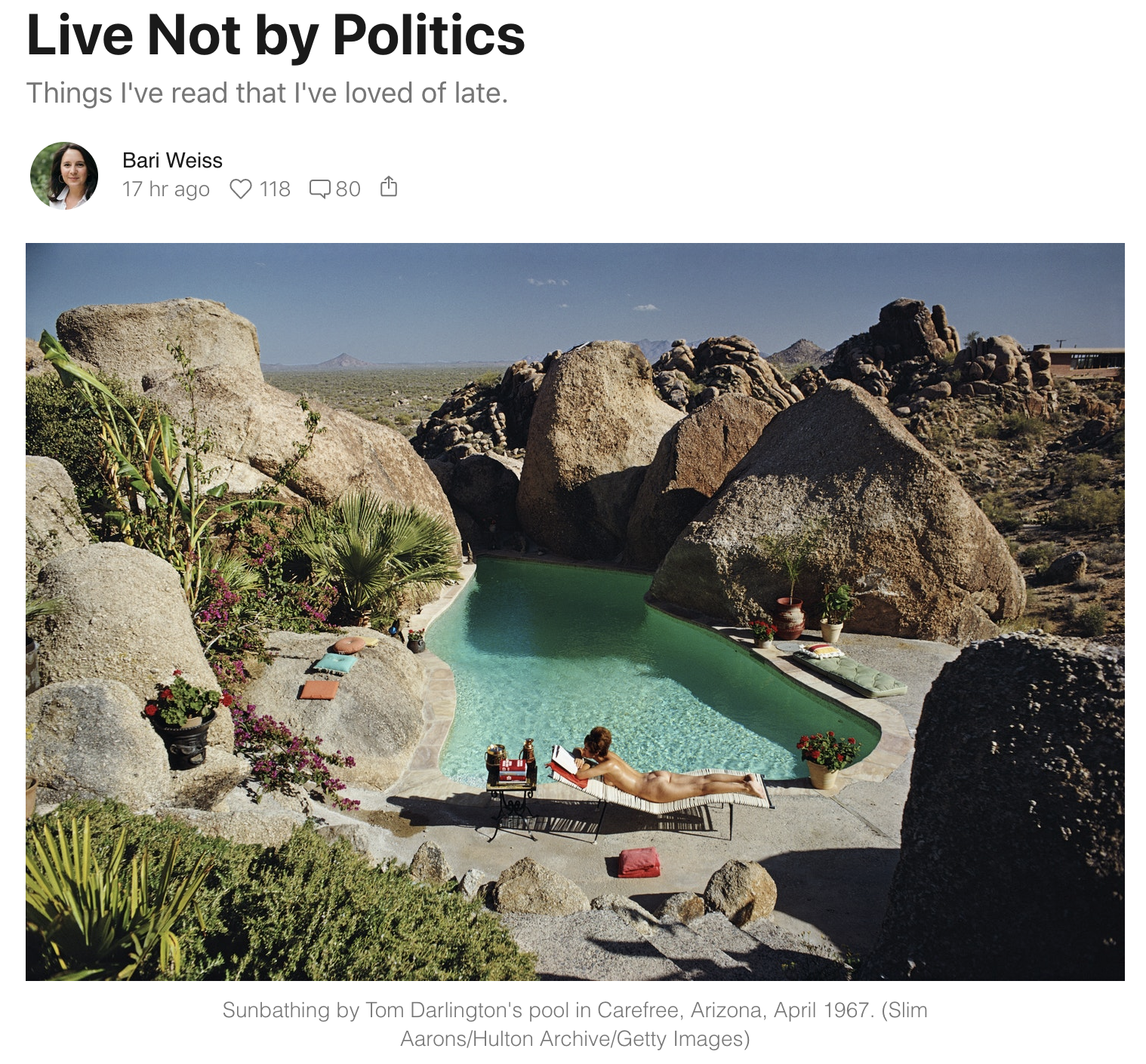 THE REVOLT OF THE PUBLIC by former CIA analyst Martin Gurri is the book I have recommended more than any other this past year. He owes me a cut, as I told him in a recent interview, which I’m going to write up for a future column.

Anyone that thinks the primary conflict in America is between Republicans and Democrats is out to lunch. The real conflict — not just in this country but in the 21st century — is the one between what Gurri variously calls the center and the border, the hierarchy and the network, or the elites in their ivory towers and the public in their chaotic squares. That conflict has been created by the digital revolution. If you dream of things calming down or going back to normal anytime soon, bad news: we are only at the very beginning.

The tool of the revolution is information. The authority of 20th century institutions like Harvard or The New York Times depended on scarcity; they genuinely had access to exclusive information and secret knowledge. That authority has utterly collapsed under the force of the never-ending tsunami of information available to any fool with Google.

If you want to understand how seemingly discreet phenomenon like Brexit, the election of Donald Trump, and the GameStop short squeeze are actually all part of one story, Gurri, who published this book in 2014, will show you.

Most important, he will convince you, once and for all, that the old hierarchies are dead and no amount of nostalgia can revive them. The real question is what comes next.

Christopher Lasch’s book THE REVOLT OF THE ELITES — the books are best experienced as a double feature — makes the compelling case that our elite class has abandoned its sense of duty and noblesse oblige. That unmooring from community, from commitment, and from a common culture has unraveled our democracy. It is them and not the deplorables, he argues, who pose the real threat.

Lasch’s book was published in 1996, but you will not believe how prescient it is. It should be required reading — his book, “The Culture of Narcissism,” is next on my last — but in every indie bookstore I enter the clerk draws a blank when I ask for either title.

For some reason, neither of these suggestions floats my boat.  Here is a list of her other recent recommendations with Amazon links:

Live Not by Lies by Rod Dreher

Alexandria, a novel by Paul Kingsnorth

I haven’t read any of these, but I did read one she mentions in passing: Bad Blood, by John Carreyrou, an account of Elizabeth Holmes and the fall of her blood-testing company Theranos. That was a page turner, and I recommend it highly. Holmes and her partner and ex-squeeze Sunny Balwani are still waiting trial on a number of charges, and it’s been a long time.

As for my own reading, I finished Ibram Kendi’s How to be an Antiracist, which most of us will find Manichean and irritating, but it does make some good points, including emphasizing that members of all races can be racist (well, we knew that, but it’s interesting to see Kendi admit it). But the interweaving of his life story with his principles does not make for a smooth read, and his insistence that structural racism is so prevalent that any lack of equity (absolutely proportional representation) must be attribute to racism is debatable. Still, all of us should read this book if we’re to be conversant with Critical Theory. I hear that his Stamped from the Beginning, a history of racism in America that won a National Book Award, is better.

Much of my time over the past few weeks has been involved in reading things that Adam Gopnik cites (his own articles and books) in our discussion about “ways of knowing”.  That involved several long articles on Trollope and DIckens, other analysis of these authors, some of the authors themselves, and, finally, Adam’s series of CBC Massey lectures on literature, Winter: Five Windows on the Season. Each 1200-1300 word letter I write in this exchange takes many hours of preparation. I get a break now while he prepares his response, and I hope he doesn’t cite a lot more articles!

In the meantime, I polished off a novel that James Wood, the New Yorker book critic, recommended to me. I asked him if I should read The Goldfinch by Donna Tartt, which won a Pulitzer Prize for Fiction in 2014 (I found it in a free book box), but he told me to read another novel instead: All for Nothing by Walter Kepowski, written in 2006 and translated into English in 2015. Wood also told me not to read his New Yorker review of the book beforehand, as it contained spoilers. I read the review only after I finished, and see why Wood recommended it: he absolutely loved it. And so did I. It starts off a bit slowly, but is still absolutely absorbing, and then things begin to happen exponentially as the book comes to an end. (It’s about the end of the Third Reich viewed from a group of villagers, rich and poor, in eastern Germany who know that the Russians are coming.) This one I recommend highly. Wood calls it a “masterpiece.”

Next in line for me is the book below, in which Dan Dennett (a compatibilist) and Gregg Caruso (a hard determinist) debate free will. I’ll crack it this weekend, though I suspect I’ll come down on Caruso’s side. 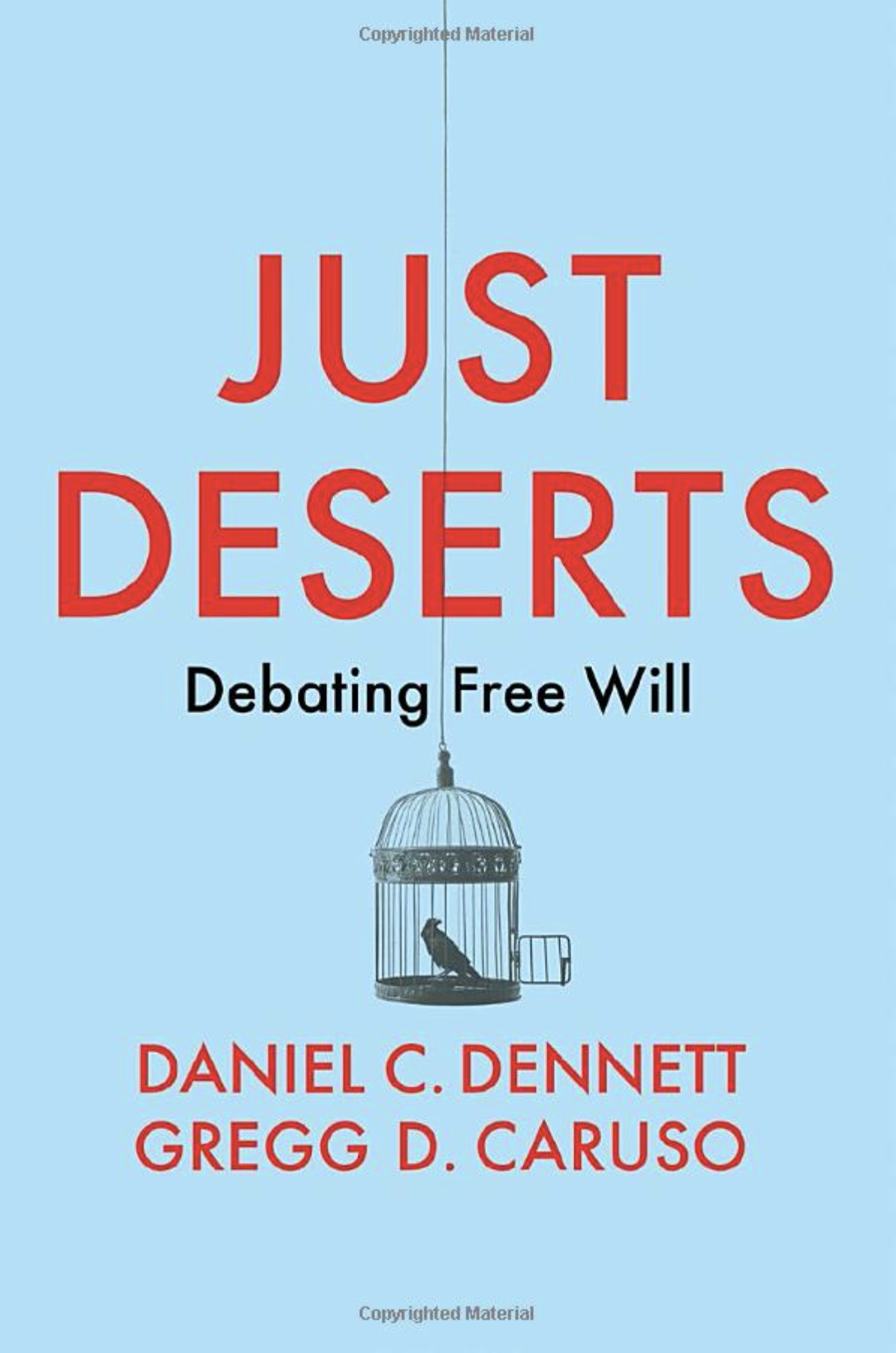 Please put in the comments any books you’ve read recently and what you thought of them.