Today I’m just going to report on things happening in a climate of Wokeness. I hardly need comment on them because they’re similar to things that have happened before. Take today’s posts as a documentation of the balkanization of society—and not just in America.

As I reported on March 1, a Dutch translator lined up to put the poetry of Amanda Gorman—who spoke at the Inauguration—into Dutch had to drop out after critics suggested it was inappropriate for a white person to translate the poems of a young black woman.  Even Gorman approved of the translator, who, though they were white (the translator uses plural pronouns), was also “non binary”. Shouldn’t that rung on the oppression ladder count for something in this crazy world? Nope; it’s all based on skin color.

Now it’s happened again. As the Guardian reports, a poet who was to translate Gorman’s work into Catalan was deemed unsuitable because his “profile” (read: skin color and perhaps sex or age) was wrong. In this case the translator was fired rather than quitting in the face of social (justice) pressure. 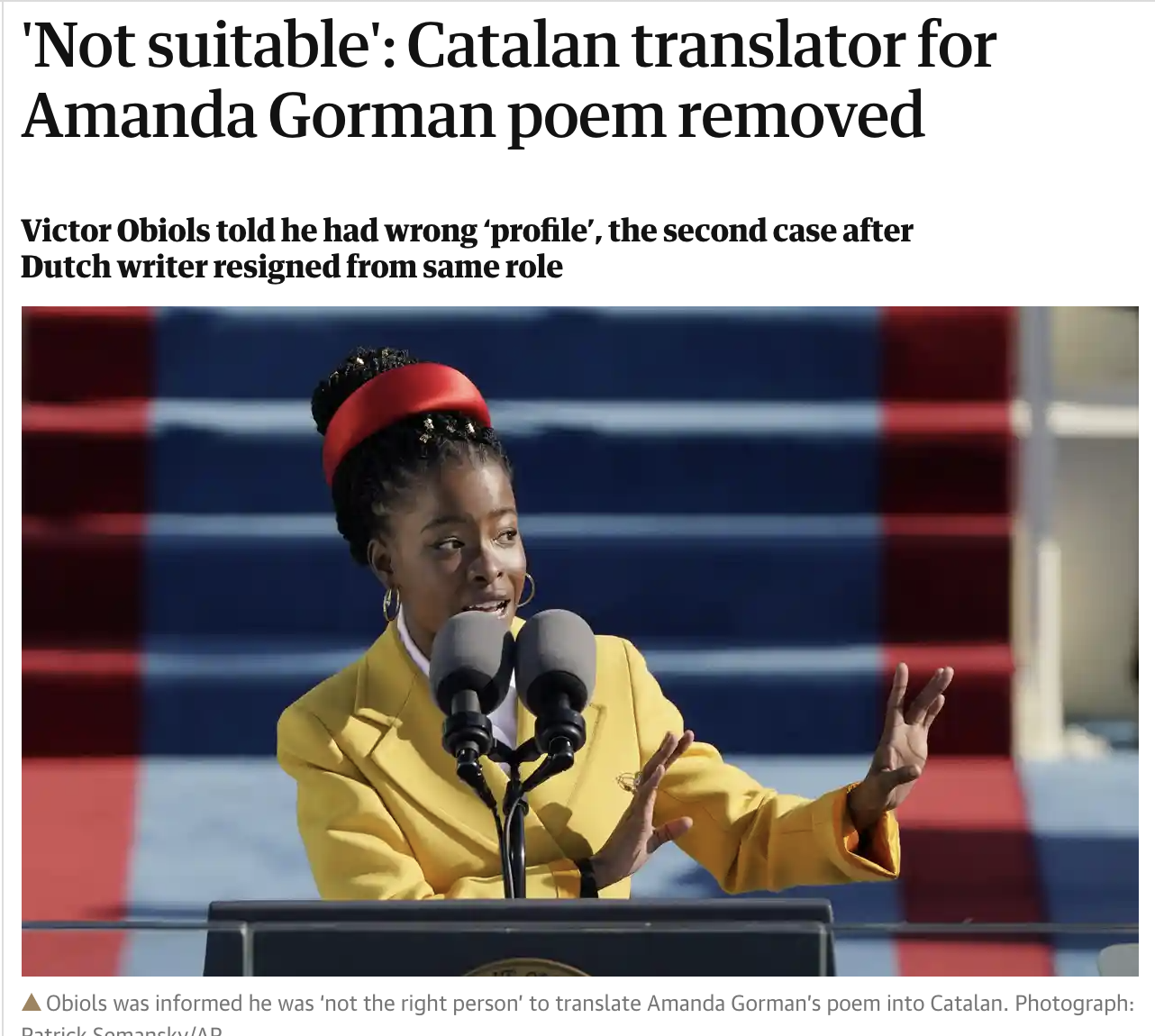 The Catalan translator for the poem that American writer Amanda Gorman read at US president Joe Biden’s inauguration has said he has been removed from the job because he had the wrong “profile”.

It was the second such case in Europe after Dutch writer Marieke Lucas Rijneveld resigned from the job of translating Gorman’s work following criticism that a black writer was not chosen.

“They told me that I am not suitable to translate it,” Catalan translator Victor Obiols told AFP on Wednesday. “They did not question my abilities, but they were looking for a different profile, which had to be a woman, young, activist and preferably black.”

Look at all the criteria he had to meet: age, sex, race, and degree of activism! If you read Gorman’s Inaugural Poem, “The Hill We Climb“, which is neither linguistically, intellectually complex, nor subtle, you’ll know that what’s required here is simply a sensitivity to poetry and the ability to translate from one language to another.

Not only that, but Obiols had already translated works from English into Catalan, including Oscar Wilde and Shakespeare—writers that are surely more difficult to tackle than is Gorman.

Obois was supposed to translate “The Hill We Climb” into an apparently standalone version, with a foreword by Oprah Winfrey, when he got word that “he was not the right person”. It’s not clear who made this decision. Obois didn’t go gentle, as opposed to the Dutch translator:

“It is a very complicated subject that cannot be treated with frivolity,” said Obiols, a resident of Barcelona.

Yes, an obvious point, but a good one. Likewise, Ezra Pound would have been deemed unsuitable to translate old English and Chinese poetry into modern English, but he did a fantastic job: those translations are some of his finest work. Read “The River-Merchant’s Wife: A Letter.”

You could find innumerable cases of translators who differed in ethnicity, age, race, sex, and so on from their subjects, but who did great jobs. Constance Garnett (1861-1946), an English woman, was and is still famous for her translations of Russian literature, and it was through her translations that I became acquainted with the works of Chekhov, Dostoevsky, Tolstoy and Gogol (she translated 71 books of Russian literature, and some of them were big ‘uns!). Her work is sensitive and poetic. But she was neither male nor Russian, so fie with her!

There are only two possible reasons for rejecting a translator in a case like this. The first is purely ideological: you have to find a translator that aligns with the writer for reasons of social justice, perhaps as a form of reparations or literary affirmative action. The second has to do with quality: one could claim that political/racial/sexual alignment is necessary to do a good job of translation. I think that reason has been amply disproven, leaving the first reason—the Woke one—as the only plausible alternative.

If you want more evidence, I propose this experiment: find a black female activist Catalan translator (good luck with that!) to translate Gorman’s poem into English, as well as a number of other translators: young Catalan white women, non-Catalan white women, old Catalan black women, Catalan women who are not activists, Asian women who speak Catalan but aren’t activists, and so on. Then put all the translations side by side in a blind study and see if neutral Catalan-and-English speaking observers, judging by the translation alone, can pick out the one poem translated by the wholly “appropriate” translator. I’m pretty sure that they wouldn’t be able to do it.  And if that failed, it shows that you can’t argue that only the properly aligned translator can do justice to the original poem.  Clearly, the first explanation: compatibility with Wokeness, is more plausible. It’s also ridiculous.

I have yet to see a full explanation from the Translation Cancelers of exactly why differences in ethnicity, age, race, and sex are necessary for an Amanda Gorman translation. They just use the word “inappropriate”.