The Washington Post reports that Pepe Le Pew, the cartoon skunk who appeared in the first Warner Brother’s “Space Jam” movie in 1996, will not appear in the new sequel coming out in July. Why? The skunk, who first showed up as a cartoon character in 1949 (the year I was born) is a sexual predator, setting a bad example for everyone. 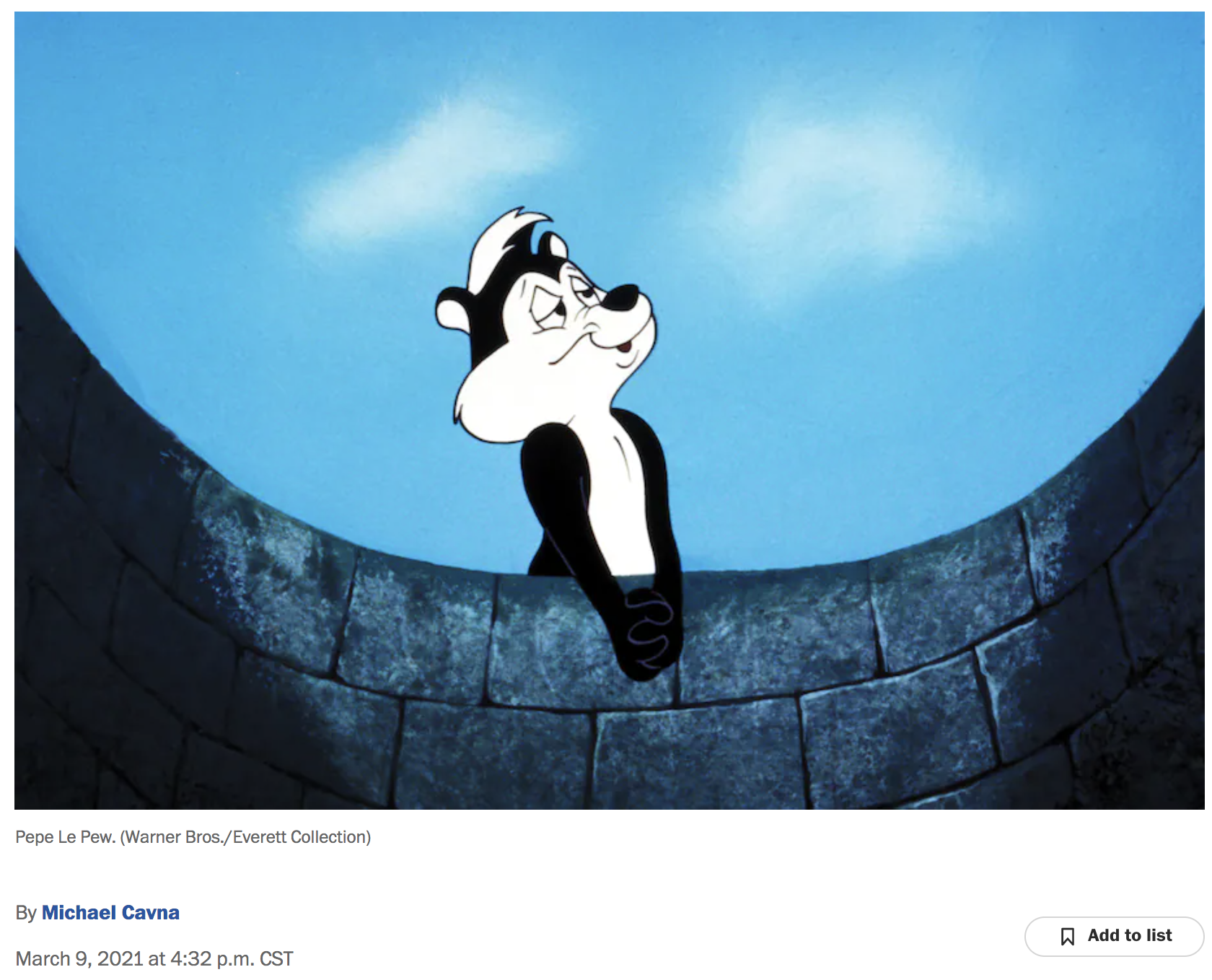 I wasn’t a big fan of Pepe Le Pew (I liked the Roadrunner and Wile E. Coyote), but I do remember he was always coming on to female animals. I can’t even remember if they were skunks. I guess Pepe came on too strong, as he’s now canceled, and probably for good. He was the Harvey Weinstein of cartoon wildlife:

Over the weekend, Pepe’s name resurfaced when Deadline reported that the lecherously predatory skunk won’t appear in the sequel “Space Jam: A New Legacy” due out in July, after a scene involving Pepe — shot by the film’s first director, Terence Nance — was cut. Director Malcolm D. Lee took over the movie nearly two years ago.

Deadline reported that Pepe Le Pew will “likely be a thing of the past across all media,” and the Hollywood Reporter also noted that “there are no current plans for the controversial cartoon skunk to return.” (The Washington Post reached out to Warner Bros. for comment but has not yet been provided with one.)

On Deadspin, Julie DiCaro said Pepe Le Pew deserved to be “canceled,” writing that since his World War II-era creation, “we’ve learned a lot more about consent and women have fought and won more recognition of their bodily autonomy. And yet, we continued to see these same old ‘she’s just playing hard to get’trope[s] inentertainment even today.”

Oops, there goes Jessica Rabbit, an example of objectification if ever there was one!  Now I’m not sure whether Pepe ever raped anyone (I doubt it, since they don’t show sex in cartoons), but he probably tried to smooch other animals without consent.  He was a roué for sure, but human equivalents exists, and here’s an object lesson for kids. Further, Pepe was actually modeled as a spoof of a Looney Tunes worker called Tedd Pierce, who “was always baffled when women didn’t return his intentions.” But that doesn’t matter: what matters is that he’s a predator. And maybe there’s a point there, but I don’t think it’s a no-brainer to ditch the predatory mustelid.

It’s hard to find Pepe cartoons online, as I wanted to check how bad he was. I came up with one in Spanish (below). Pepe appears at 2:28, and, sure enough, he jumps the faux female skunk and then pursues her relentlessly. Is this going to give kids the wrong idea? Some certainly think so:

Andrew Farago, curator at San Francisco’s Cartoon Art Museum and author of “The Looney Tunes Treasury,”says Seuss characters and the Warner Bros. animators used “then-commonplace racial and cultural stereotypes,” though“the enduring popularity of Dr. Seuss and Looney Tunes has led to some issues that their creators, born in the early 1900s, never could have anticipated.”

. . . . Farago says it makes sense why companies would alter and remove certain visual images as they endure through new eras: “Letting these problematic works fall by the wayside is a very reasonable way to address this issue.”

Is it? If you disagree, watch a few minutes of this cartoon, starting at about 2:30:

You know, I can see where watching these cartoons could give kids the wrong idea about how to behave, but isn’t that what parents are for? Do we really need to keep kids from watching them by letting them “fall by the wayside”? (It’s curious that Speedy Gonzalez isn’t getting canceled: he’s a stereotyped Mexican with a sombrero (remember, Halloween costumes with sombreros are out).  Here’s the defiant Gabriel-Iglesias (nicknamed “Fluffy”) who voices Speedy in the new movie, along with a response:

My best friend/coworker called me Speedy Gonzalez at work because im so fast. Im Puerto Rican and dont mind at all. I think it was cute and accurate.

But Pepe Le Pew isn’t the first cartoon they came for. I was horrified to read this:

The examples keep stacking up: Disney Plus recently removed such films as “Peter Pan” and “Dumbo” from its set of titles designated for children’s viewership profiles, because of stereotypes and racist depictions.

What the deuce? No pistols on Yosemite Sam? No gun on Elmer Fudd? WHY? would that encourage gun use? And why, then, is Acme dynamite still around. There was FAR more violence in Roadrunner cartoons than in Yosemite Sam cartoons.

What we’ll be left with, eventually, are bland and anodyne cartoons stripped of everything that could offend someone’s modern morality.  No Peter Pan and no Dumbo? Bloody hell! (I have yet to learn how Peter Pan and Dumbo cause “harm.” You might amuse yourself by trying to guess.)