Because of the increasing prevalence of people who don’t identify as male or female, are transgender, or don’t think that children should be socialized towards the “stereotypes” one sex or another, the inevitable has happened. According to WHSV in California, two state lawmakers there have introduced a bill that will eliminate separate “boys” and “girls” sections in stores. This includes toys and clothes, the two biggies. The law is now in a preliminary stage, if passed and signed by the governor, the bill would take effect on January 1, 2024.

Click on the screenshot, which also has a short news video. 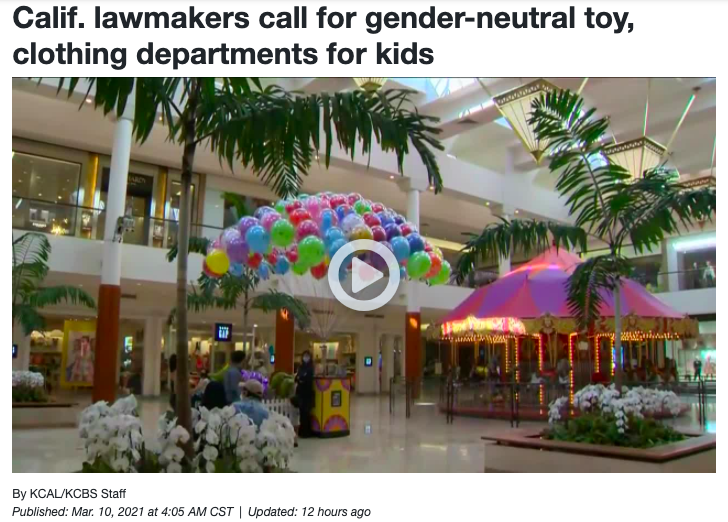 California Assembly Members Evan Low and Cristina Garcia are making a push for gender-neutral retail departments to encourage more tolerance and open-mindedness in parents and children. If big box stores don’t comply, they could face a $1,000 fine.

The bill would apply to departments that sell childcare items, children’s clothing or toys.

“Let kids play with whatever they want to, and it would also just be easier to find everything if it’s combined into one,” shopper Edith Ismail said.

Low says the bill was inspired by an 8-year-old named Britten who wanted to know why store departments were separated by gender.

“Her bill will help children express themselves freely and without bias. We need to let kids be kids,” he said.

Not having kids, I don’t have much of a dog in this fight.  I just wonder whether, if you have a boy who likes dolls and a girl who likes trucks, you can’t just shop in the other section. I don’t really care.  But what about adult sections? For the very same reasons—with the exception of socialization—you could combine men and women’s clothing into one gender-neutral gemisch. That would be confusing, because women’s sizes are different from men’s, as are the cuts of things like jeans.  I wouldn’t favor that, but the same rationale might hold: a transgender woman who wants to still dress as a man, or someone who identifies as “nonbinary”, might be offended by the separation of clothing sections by sex.

But I wonder if a bill like this could pass anywhere.