I didn’t know what City Journal was, which published the article below (click on screenshot). It turns out that Wikipedia describes it as “a public policy magazine and website, published by the conservative Manhattan Institute for Policy Research, that covers a wide range of topics, from policing strategy, education reform, and social policy to urban architecture, family culture, and contemporary theories emanating from law schools, charitable foundations, and public health organizations.”

It’s no surprise that they published this article, but I’m not going to ditch a story, regardless of the source, unless I find out it’s wrong or have suspicions that it’s wrong. Likewise, I won’t ditch a story by the New York Times or Washington Post on the grounds of political affiliation alone. Do be aware, though, that it’s the conservative media that concentrates on wokeness, and that’s one reason, I suspect, why the “Blue Wave” didn’t materialize last November. (But thank Ceiling Cat we got the House, the Senate, and the Presidency.) As always, I rage against the dying of what’s right for a reason: to avoid pollution of the Left.

But wait: it gets worse. The article was written, and the “source documents” presented elsewhere, by Christopher Rufo, who works for the creationist Discovery Institute. For some reason the DI hired Rufo to go after wokeness, and I have no idea why. Did they give up on Intelligent Design? I don’t think so.  Rufo’s own site says this:

Christopher F. Rufo is the director of Discovery Institute’s Center on Wealth & Poverty. He has directed four documentaries for PBS and is currently a contributing editor for City Journal, where he covers homelessness, addiction, mental illness, crime, and other afflictions.

The mystery deepens. PBS, that bastion of liberality?

Anyway, the story is unbelievable, and there is what’s called “supporting evidence”, which is quite thin because there’s no description of what’s being shown by Rufo. Click on the screenshot to read for yourself:

From the City Journal:

An elementary school in Cupertino, California—a Silicon Valley community with a median home price of $2.3 million—recently forced a class of third-graders to deconstruct their racial identities, then rank themselves according to their “power and privilege.”

Based on whistleblower documents and parents familiar with the session, a third-grade teacher at R.I. Meyerholz Elementary School began the lesson on “social identities” during a math class. The teacher asked all students to create an “identity map,” listing their race, class, gender, religion, family structure, and other characteristics. The teacher explained that the students live in a “dominant culture” of “white, middle class, cisgender, educated, able-bodied, Christian, English speaker[s],” who, according to the lesson, “created and maintained” this culture in order “to hold power and stay in power.”

JAC: Most of the school is Asian, which technically isn’t white. I suppose they mean “white adjacent”—the term now used to refer to high-achieving “groups of color”.

Next, reading from This Book Is Antiracist, the students learned that “those with privilege have power over others” and that “folx [JAC: note spelling: “folks” have no gender attached] who do not benefit from their social identities, who are in the subordinate culture, have little to no privilege and power.” As an example, the reading states that “a white, cisgender man, who is able-bodied, heterosexual, considered handsome and speaks English has more privilege than a Black transgender woman.” In some cases, because of the principle of intersectionality, “there are parts of us that hold some power and other parts that are oppressed,” even within a single individual.

Following this discussion, the teacher had the students deconstruct their own intersectional identities and “circle the identities that hold power and privilege” on their identity maps, ranking their traits according to the hierarchy. In a related assignment, the students were asked to write short essays describing which aspects of their identities “hold power and privilege” and which do not. The students were expected to produce “at least one full page of writing.” As an example, the presentation included a short paragraph about transgenderism and nonbinary sexuality.

If true, this is pretty dire. Now the parents objected, and the school ditched the program after a squabble. But it shows that parents have to be ever vigilant as this stuff metastasizes into lower and lower grades.

It turns out that although the school is 94% nonwhite, most of the families are Asian. And Asians are some of the biggest opponents of Wokeism, because, although they’re officially considered people of color, they are discriminated against by colleges like Harvard because Asians are a high-achieving ethnic group. If you want to efface any criteria of merit to raise the proportion of other ethnic groups, you’re going to be taking Asians out of the mix.

I say this by way of explanation, not approbation, because I believe in some types of affirmative action up to college admission as a form of reparations. You might ask yourself, “Well, weren’t Asians once discriminated against, too? And my answer will be, “Yes. How about the Cubs this year?” because I’m truly not qualified to pronounce on differences in achievement of ethnic groups. But I do oppose the desire of many Asian-Americans to eliminate all forms of affirmative action.

At any rate, the Asian-American parents at Cupertino are up in arms:

At Meyerholz Elementary, the Asian-American families are on high alert for critical race theory in the classroom. Since their initial victory, they have begun to consider campaigning against the school board. “We think some of our school board members are [critical race theory] activists and they must go,” said one parent. The capture of our public institutions by progressives obsessed by race and privilege deserves opposition at every level. The parents of Cupertino have joined the fight.

I’m not sure what the “whistleblower documents” are, but you can check for yourself. Below are two screenshots, and they look like a lesson plan, not stuff given to third graders, who are only nine years old. However, as the article notes, the school more or less admitted that the lesson did take place during a math class (?):

The lesson caused an immediate uproar among Meyerholz Elementary parents. “We were shocked,” said one parent, who agreed to speak with me on condition of anonymity. “They were basically teaching racism to my eight-year-old.” This parent, who is Asian-American, rallied a group of a half dozen families to protest the school’s intersectionality curriculum. The group met with the school principal and demanded an end to the racially divisive instruction. After a tense meeting, the administration agreed to suspend the program. (When reached for comment, Jenn Lashier, the principal of Meyerholz Elementary, said that the training was not part of the “formal curricula, but the process of daily learning facilitated by a certified teacher.”) 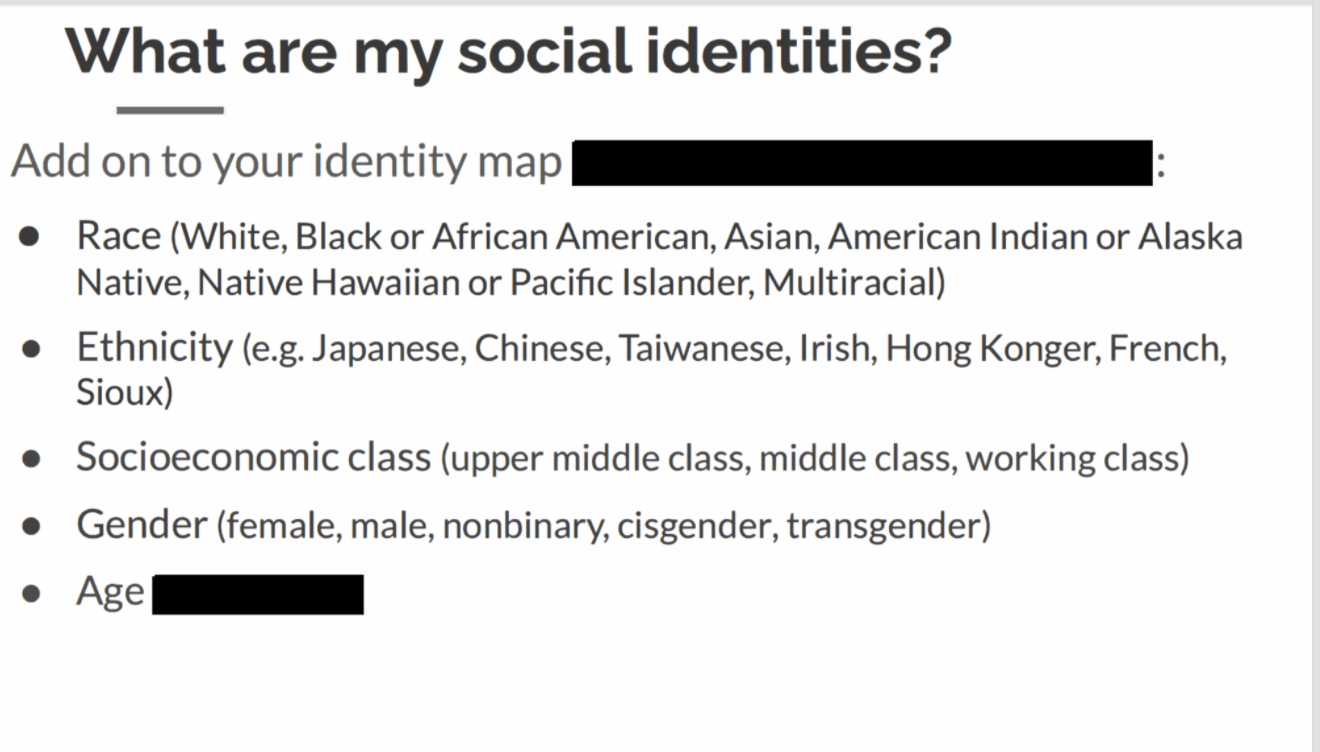 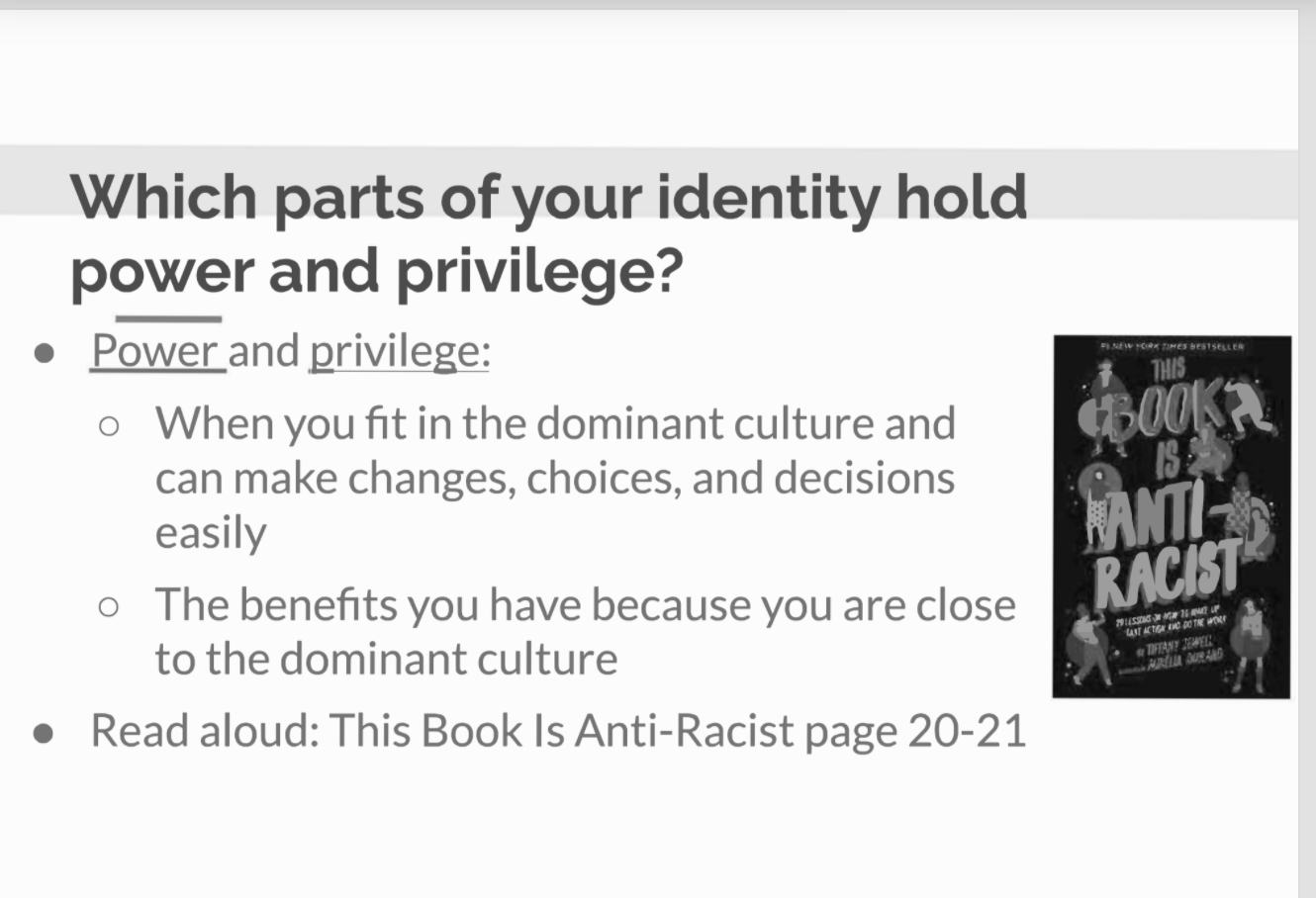 Here’s a plot of the race and ethnicity in the Cupertino Union Elementary School District (thick bars) vs. California as a whole (thin bars) 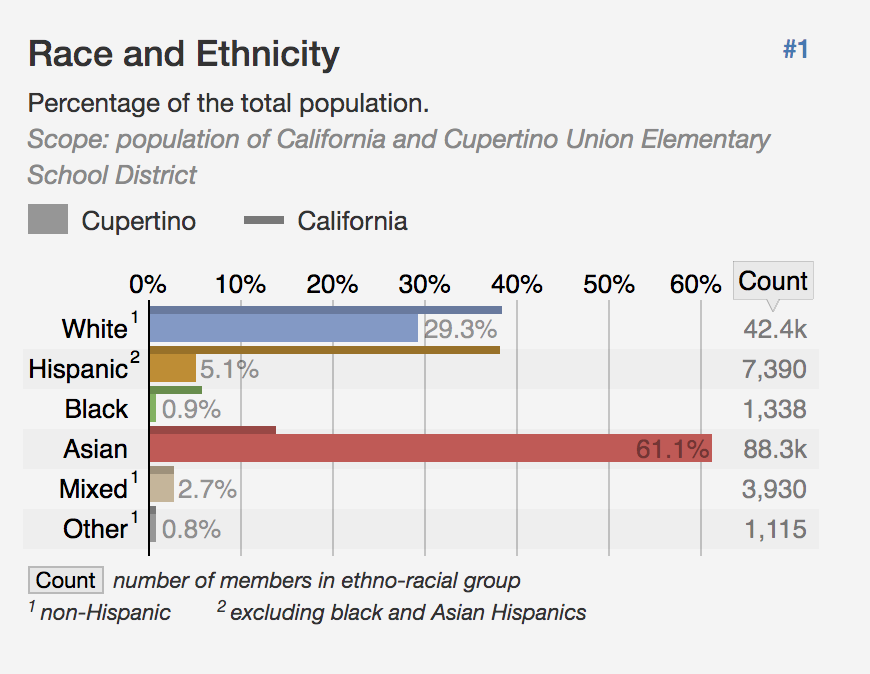