First, have a look at these videos showing American woodcocks (Scolopax minor) walking. This bizarre way of walking (they do it only occasionally; see below), with a rocking motion and an absolutely steady head, is unique among birds. (People can’t resist putting this movement to music; turn off the sound if you don’t want to hear “Walk Like an Egyptian”!)

Juveniles do it as well:

Very young chicks also do it, though not as strikingly as the adults. Woodcocks eat earthworms and invertebrates (ants, millipedes, etc.) that they grub from the soil, and you can see this one probing a bit.

Finally, a range map from the Cornell bird site. If you live in the right place and are lucky, you might see one, though they tend to hunker down in the woods and become almost invisible: 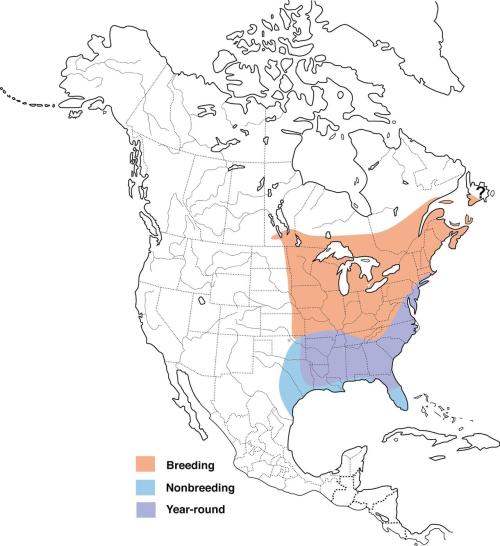 I believe I showed a tweet of this behavior the other day and asked readers, “Why do they do this?”, noting that there are several hypotheses. I put the question to our expert ornithologist, Bruce Lyon of the University of California at Santa Cruz, who put me on to two papers (below), one of which may well have the correct answer. Let me add that we still don’t know the reason, and more observations and experiments are in order; but the one advanced in the second paper below makes the most sense given the data at hand.

Here’s the first paper, which summarizes several theories, but not the one that’s probably correct. It’s from a 1982 issue of The Auk (click on screenshot to read):

Marshall watched woodcocks intently—once for a total of 8 hours during three days in 1978—and describes the motion:

As the bird slowly walked about, its head and neck remained on a level plane, but its body was almost continually moving back and forth, best described as “rocking.” A line between the neck and dorsal feathers was obvious, because, while the body moved, the head did not. One foot was lifted high then placed down ahead with the weight on it; the other foot was lifted so that only the tips of the toes were in contact with the ground. This repetitious movement stopped when the bird picked a small worm from the surface, probed deeply to pull out a large worm, or extracted an insect from under a leaf. The head was well forward and held slightly to one side with the tip of the bill 3 cm or less above the surface.Sometimes progress was broken by repeated rocking in one place, and, less often, the bird stood motionless for several minutes.

He gives four explanations that had already been advanced at that time. The comments are mine:

1.) “A nervous action resulting from fear or suspicion”.  Given that this action calls attention to the bird, it would seem maladaptive to do this if there was a predator around. However, as we’ll see below, it may actually be adaptive in that situation.

2.) “Mimicry of leaves being moved by a breeze.” This seems unlikely as the birds do this when there is no breeze, as Marshall observes, and the rocking is not really very close to that of leaves, which move erratically.

3.) “Mimicry of prevailing shadows”.  As Marshall observes, they walk like this even when it’s overcast and there are no shadows, and the behavior, in fact, makes the birds more conspicuous, at least to a human observer, than when they stand still.

4.) Detection of earthworms or insects under the ground. The hypothesis is that the bird, by walking this way, exerts pressure on the ground that makes the worms and insects move, thus enabling the woodcock to detect them and eat them. At the time Heinrich wrote the paper below, 34 years later, this seems to have become the prevailing explanation. But, as we’ll see, it doesn’t seem likely. If you watched the first and second video above, you’ll probably see why.

Bernd Heinrich is a first-class scientist and naturalist, as well as a world-class long-distance runner, and I’ve read several of his books on corvids (he’s written a lot of popular books). This short paper, based on Heinrich’s observations of woodcocks, was published in Northeastern Naturalist (click screenshot to read the paper):

Heinrich’s observations show that woodcocks only walk like this under certain conditions: when they know they are being watched (Heinrich didn’t see them do it when he hid himself and watched with binoculars), and they do it in open habitat where it’s more likely that a predator would spot them. When Heinrich followed the birds, they rocked only when walking away from him. When he stopped, the birds stopped. When he started walking toward the birds again, the birds started their rocking walk.  Also, they don’t rock when they’re in the woods, where they’re more cryptic.

Although rocking, says Heinrich, occurs during foraging, it’s not likely that it helps the birds detect earthworms or other insects underground. For one thing, as you saw above, they do the “rock walk” on asphalt or on the snow, and there are no invertebrates to be found that way. Further, the way the birds walk is a gentle placement of the feet on the soil, and not, as Heinrich says, “the kind [of walk] designed to cause earth vibrations.” If that were the case, the bird would probably stomp forcefully on the ground, for violent vibrations are what make worms and insects move. (These are created in the American South by “grunters” who use a chainsaw to create violent vibrations in the soil to bring up worms for fishing.)

All of these considerations lead Heinrich to his hypothesis, which derives from observations of other animals that make themselves conspicuous to predators when they know predators are around:

In certain situations, some animals make themselves highly conspicuous to predators, as a defense. Alcock (2013) summarizes these deliberately conspicuous behaviors, such as the slotting of antelope (Pitcher 1979), the waving of the tail by an Anolis lizard when it had been discovered by a potential predator (Leal 1999), and the white tail flashing of fleeing Odocoileus virginianus (Zimmermann) (White-tailed deer), as “advertisements of unprofitability” that act to reduce the likelihood of attack by a potential predator. This hypothesis for the function of a potentially conspicuous behavior gives relevance to the visually conspicuous “rocking” behavior of Woodcock, given the circumstances of when it occurs and an anecdote of my own.

Here’s a springbok “stotting” (also called “pronking”), one of the behaviors thought to be an alert to predators saying, “Don’t bother to attack; I’ve seen you already.”

Why would an animal do this? And why would it deter predators? If a predator knows the potential prey has seen it, and has let it know that detection by a conspicuous display, it’s to the predator’s advantage not to attack, because its advantage of stealth has been lost. Attacking would likely be a waste of time and energy. And it’s to the potential prey’s advantage to make such a display, because it uses less energy to “rock walk” than, say, to fly away,= and potentially leave a spot rich in food.  The evolution of this behavior would probably start by some individuals doing something that makes themselves conspicuous when they see a predator, and those would be individuals in species that have the ability to flee successfully when a predator is close. But it depends on the display deterring the predator, so some learning of the predator must also occur. (Later, that learning could actually become an evolved behavior by the predator to simply not attack when it sees the display.)

And this is, my Best Beloved, is How The Woodcock Got Its Walk. Here’s Heinrich’s hypothesis:

I suggest that the Woodcock rocking-walk display is a response to what it perceives as a mild potential threat situation that is not severe enough to initiate predator-avoidance tactics to disrupt it into flight or cryptic hiding. The Woodcock’s rocking-walk display may act as a signal in a situation of a perceived potential audience or a predator, indicating that it is aware and can explode off the ground and escape if the predator seems likely to attack. The display saves the bird the energy and bother of flying off and possibly being chased.

The rocking walk display is likely to occur during foraging, because foraging is centered at a food-rich place that the bird may be reluctant to leave. In most instances, available video clips of the behavior (displayed on the Internet by interested citizens) were made of Woodcock in potentially threatening ecological settings or during a discrete threat. The Woodcock were either out of their usually preferred woodland habitat (Bent 1927, McAuley et al. 2013) or near humans and were thus potentially “nervous from fear and suspicion” as Pettingill (1936) had originally supposed.

Good scientist that he is, Heinrich proposes further tests, and (not shown below) also suggests tests of the “worm detection hypothesis”.

That the bird’s behavior while walking is variable, including a teetering motion, is undisputed, but the reason(s) for this behavior is still uncertain. To test the display hypothesis that I propose would require observing the bird unseen (perhaps by remote video camera), both undisturbed in its preferred habitat and then under the influence of a mild (but not strong) potential threat in the presence of a resource of significant value to the bird.

Here’s Bernd himself, studying his beloved ravens; I’ve met him once or twice: 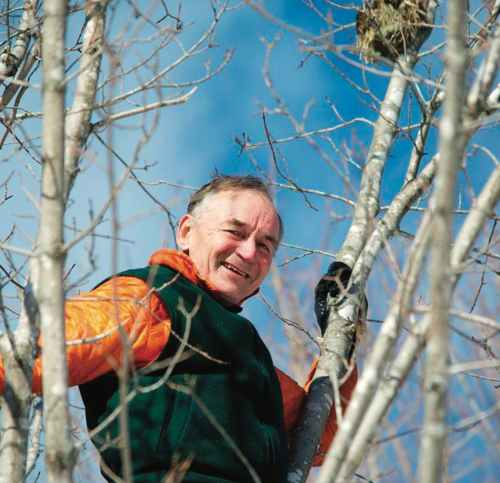 Heinrich, born in Poland in 1940 (Wikipedia says Germany, but it’s wrong), is also an “ultrarunner”, and was the best in America at long-distance running during the first half of the 1980s.  He held records in the 100 kilometer race and in the straight 24-hour run (oy!), the latter with a record distance of 156 miles (he was then taken to the hospital). Here he is finishing the record 100K (62 miles!): 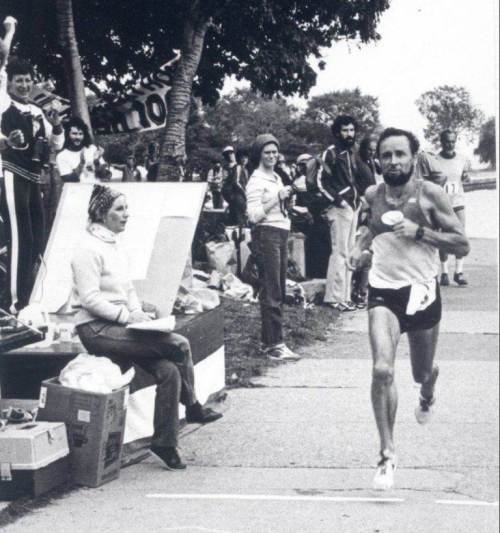 50 thoughts on “Why do woodcocks rock when they walk?”