As I wrote about two weeks ago, Adam Gopnik, a well-known writer who’s on staff at The New Yorker, is engaging me in an Internet discussion about “ways of knowing” on the “Conversation” site of Letter. I was going to post only when the exchange—which will involve either three or four letters each—was complete, but I decided that I’d let readers know as each letter goes up.  I’ve just posted my response to Adam, which is my second letter and #3 in the series at the website below (click on screenshot to read). Each week should see a new letter. 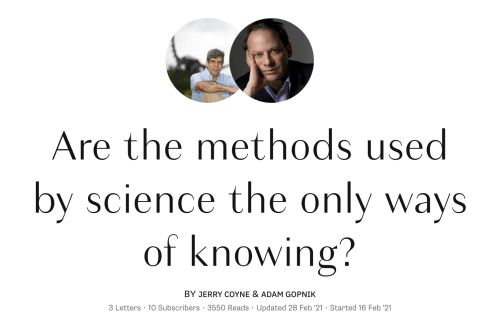 The discussion is mostly about literature, where Adam’s expertise lies, and whether knowledge can be discerned from literature alone. But I won’t go into the specifics, as our thoughts will be laid out for all to see. Feel free to comment below, though, and remember, this is a civil discussion between Adam and me, that we’re friends, and that comments should also be civil—even when critical of either of us.

70 thoughts on “A new letter to Adam Gopnik”