The universal claim that Israel is evil for abnegating its supposed moral and ethical duty to provide Covid vaccine to the Palestinians is an example of total misunderstanding as well as of a duplicitous  Palestinian campaign to demonize Israel. It also shows how Israel haters, many on the Left, never let facts get in the way of their prejudices. Read on.

Bernie Sanders is just one among many chastising Israel for not giving coronavirus vaccine to the Palestinians. This was also implied the other night on the NBC Evening News, which reported that although Israel was perhaps the country with the highest proportion of vaccinated citizens in the world (it’s small and efficient), “Palestine had not received much vaccine.” Accusations that Israel was either legally or morally obliged to give vaccine to Palestinians have also come from the New York Times, the Washington Post, CNN, The Guardian, Human Rights Watch, Amnesty International and the BBC.

As the occupying power, Israel is responsible for the health of all the people under its control. It is outrageous that Netanyahu would use spare vaccines to reward his foreign allies while so many Palestinians in the occupied territories are still waiting. https://t.co/kx4qFPtRQl

Now this accusation is wrong on two counts and misguided on another.  The first error is the claim that Israel is “responsible” by international accords to give vaccines (or provide healthcare) to the Palestinians. That is not true at all. In the first Oslo Accord of 1993, the Palestinian Authority agreed to take responsibility for its own healthcare, as well as other issues. Here’s the exact extract from that accord:

Despite this agreement, which is recognized even by Wikipedia, none of the media sources above—save the BBC, which finally admitted it was wrong—have even noted that it is the Palestinians’ responsibility to secure their own vaccine and their own healthcare. The Palestinians, early on in the Covid crisis, even asserted that they didn’t want any help from Israel in this crisis. But they said this sotto voce, and were quite willing to go along with the world’s claim that Israel was remiss in not providing the Palestinians with vaccine. (It goes without saying that Israel is vaccinating all its citizens, Arab and Jew alike, as well as Palestinians who work in Israel and Palestinian Arabs who are residents in Israel, the latter mostly in East Jerusalem. Some apartheid state!) And they quietly asked Israel for vaccine (see next point):

Wrong assertion #2: It’s not hard to discover that Palestine did (quietly) ask Israel for Covid vaccine early on, supposedly for healthcare workers but also probably for Palestinian leaders. In fact, we don’t know where the donated vaccine went, but Israel has already given Palestine 3,000 doses of vaccine when they were not required to. And now Israel has volunteered to set up a free Covid vaccine clinic on the Temple Mount, where Palestinians and other Arabs gather en masse and it would be easy to give them jabs (see the article below).  Such mass gatherings can also create superspreader events.

The Palestinians have refused Israel’s offer (click on screenshot): 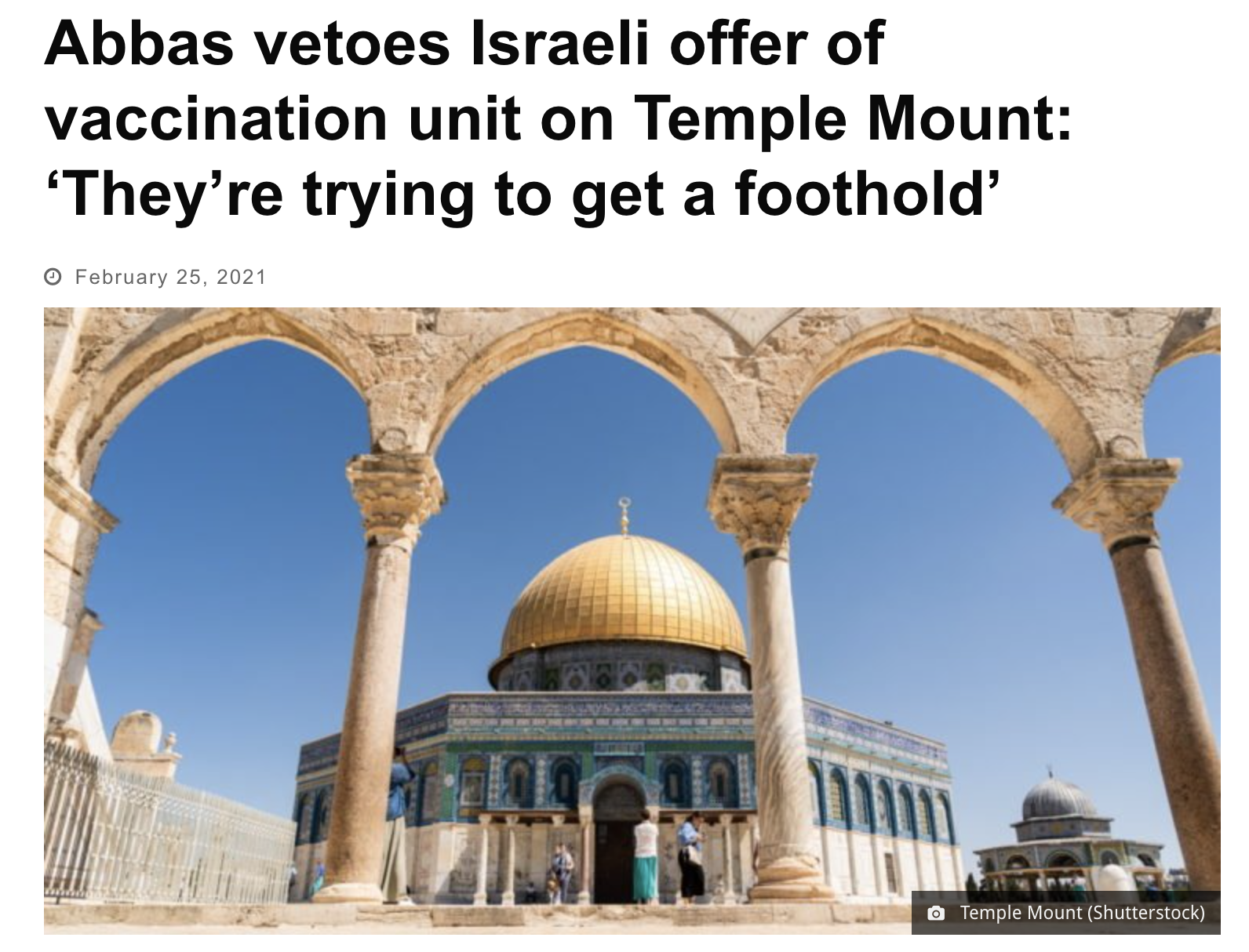 As the report notes:

Channel 11 reported Wednesday that PA President Mahmoud Abbas opposed the initiative, saying it would give Israel a “foothold” in the Al Aqsa compound. (Jerusalem had suggested the idea of putting a discreet vaccination unit inside a pharmacy on the Temple Mount.)

Israel also tried to soften the Palestinian rejection by proposing that only Arabs would administer the immunizations, and that they would be dressed in regular clothes, with nothing identifying them as coming from Israeli health organizations. The PA remained adamantly against the idea.

No dice; Abbas thinks that Israel (which owns the Temple Mount land, though agreed to allow the area to be administered by Palestinians and other Muslims) is trying to claim that Israel is using the vaccination offer as a ploy to gain more control of the Temple Mount. There is no evidence for this, and the fact that Israel promises that the vaccinations would be administered by Arabs supports that. So the Palestinians have missed a chance for thousands of them to get vaccinated.

One more thing: Israel is under no obligation, via the Oslo Accords, to give hospital care to Palestinians. But they do: in spades! The only Palestinians who aren’t given permission to be treated in Israeli hospitals are known terrorists. Israel even treats the relatives and offspring of terrorists. In 2010, 180,000 Palestinians received medical treatment in Israel. Recently, a top Palestinian leader was treated for Covid in an Israeli hospital, where Saeb Erekat chose to go instead of checking into a Palestinian hospital. (Unfortunately, he died, for he had multiple comorbidities. Of course people then accused Israel of killing him!). Why does Israel do this for its sworn enemies: residents of a territory that teaches Jew hatred and is sworn to eliminate the state of Israel? Because the Israelis are being charitable. This is hardly an apartheid state!

As for the ethical obligation, in what world is a country obligated to care for the health of citizens of a territory that attacks them, fires rockets at them, and is determined to wipe out that state? Would any country in the world other than Israel do this? I can’t think of any. And yet, despite all this, Israel is still demonized by the world. Let me add here that among all the Arab territories and countries in the Middle East, the Palestinian territories are way ahead in ordering and now procuring vaccines. Syria, Lebanon, Iraq, and other places? Forget about it: they’ve barely begun. But it’s Palestine the world is concentrating on for its supposed lack of vaccine. Are people not concerned with other Middle Eastern states? Of course not, and you know why.

Finally, it’s ironic that Bernie Sanders, who, if he lived in Israel, would be considered a Jew deserving of being murdered by Muslims, is such a good friend of Palestine. Regardless of the irony of a secular Jew—I think Bernie’s really an atheist—extolling people who would cut his throat if they could, he seems to know nothing at all about the Oslo Accords, the vaccines Israel has already given to Palestine and offered more, or about the healthcare Israel regularly gives to thousands of Palestinians.

It’s odd: I never thought much about Israel or was a gung-ho supporter of Israel, but the way the world, and especially my beloved Left, demonizes that country on completely bogus grounds has turned me into a defender of Israel. I don’t defend everything about it, of course: I don’t like occupation of the West Bank, and I have always favored the now moribund “two state solution” (it’s moribund almost entirely because the Palestinians have refused that solution several times). But the hypocrisy of the world, the UN, and the Left when it comes to Israel, and the willingness of these folks to completely ignore facts in favor of prejudice when it comes to this one tiny country, seems to me understandable only in light of a legacy of anti-Semitism. 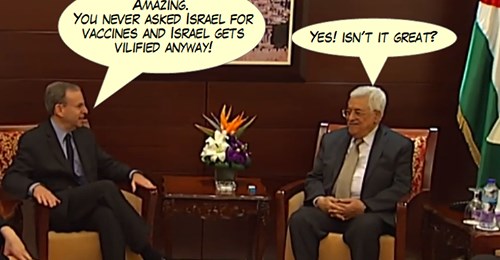 23 thoughts on “World criticizes Israel for not giving vaccines to Palestine, even though they do (and aren’t obligated to)”