As I wrote two days ago, Smith College “whistleblower” Jodi Shaw finally resigned from the College after criticizing them repeatedly for their intense and what she sees as divisive hyper-racialism, which all started with an old complaint from a black student about racism, a complaint that Smith itself found bogus. The College made her life hell, and she finally had to leave to keep from going crazy.

Shaw’s attempt to get help from Smith was futile, for Smith College has gone into full Robin DiAngelo mode.

Shaw had enough when she was accused in a public struggle session of “white fragility.” Smith has shown not an iota of compassion for her, clearly wanting to get rid of her (a employee of Smith’s Residence Life division) but also to avoid publicity. (Donors won’t be happy with what’s going on at Smith.) Smith’s President, Kathleen McCartney, even wrote an insensitive letter to the College community implying that they’d like to fire Shaw, but couldn’t because of the law.

Shaw refused a monetary settlement from Smith, which was trying to buy her silence in return for cash. They had already started investigating her and had put her on leave. A divorced mother of two, Shaw made this video about her resignation. She’s clearly stressed out and is taking some time off from making videos:

Shaw has now set up a GoFundMe campaign to help not only with her living expenses, but also with legal expenses: as she says in the video above, a lawsuit is apparently in the offing that accuses Smith of racial bias against her. Click on the screenshot below, showing that her plea has already far exceeded its goal of $150,000. The number of donors, and the amount raised so quickly, suggests that there are many people who are mad as hell with the infusion of Critical Race Theory into colleges, and aren’t going to take it any more.

Sadly, as you see below this screenshot, GoFundMe seems to have put a hold on the donations, and it’s not clear why. Shaw suspects “ideological reasons,” and I myself suspect Smith doesn’t want money being raised for a lawsuit against them. Based on their behavior in this case already, I find the college reprehensible. So far I have no reason to doubt Shaw’s assertions.

Click below; I wouldn’t donate to GoFundMe yet if you want Shaw to get the money, for they may not give it to her. But there are alternative ways to fund her (see below): 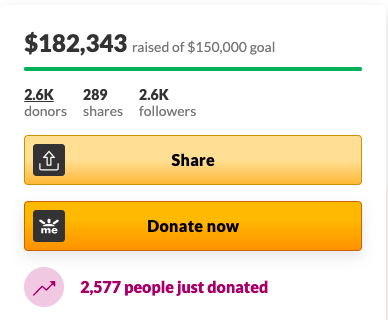 Here’s her description on GoFundMe’s hold on the funds. There’s a link to alternative funding sources (go here or click on screenshot) that cannot be stopped:

Alternative support includes PayPal or a check to her home address, which you can find at this link. If they eliminate the link above, I have that information.

Here’s her message on GoFundMe:

Through an increasing emphasis on trainings and programs grounded in Critical Social Justice, an incredibly dehumanizing ideology that posits a person’s immutable characteristics as more important than their individual character, Smith College and other institutions like it have created and nurtured a hostile work environment for staff, students and faculty.

I took a public stand against these dehumanizing policies and practices at Smith College in a series of YouTube videos. My hope was that I could not only improve working conditions for staff at Smith, but for working people everywhere who suffer under similar policies in their workplaces.

Smith responded by placing me on a leave and under investigation. During this time I was offered a settlement in exchange for my silence. In the end it was a decision between comfort or freedom. I chose freedom.

Since I cannot return to the psychologically abusive environment without further jeopardizing my mental and physical health, I have decided to leave the College.

But my fight has not ended. In some ways it has just begun. Please join me in standing up to a divisive, destructive ideology that threatens to tear our country apart. Help me hold Smith College accountable for its actions in a court of law.