The article in Quillette shown below (click on screenshot) is odd because the author is listed as “Quillette Magazine”, with no indication who did the research and writing. Claire Lehmann? Other people? If it’s a consortium of editors, they should really say so. Nothing is gained by completely anonymous publication.

Nevertheless, it’s an informative and fair piece that does three things: 1.) summarizes data showing that transgender female athletes who compete with biological women have an advantage not overcome by testosterone suppression, 2.) attacks, successfully, the American Civil Liberties Union’s (ACLU’s) new campaign to make transgender females equal to biological females in every respect, including sports, and 3.) proposes one solution to the dilemma of “how do we allow transgender women to compete in sports?” (There is no issue with transgender men, which is part of the article’s solution to the dilemma.)

It also answers the complaint of transgender rights advocates that we shouldn’t be concentrating on women’s sports. I will respond, as I always do, by asserting that the moral and legal rights of every transgender person should be respected, and full equality mandated for all but a few areas. One of those is sports, and the reason why critics like me concentrate on it is not because we’re using sports as a way to denigrate transsexual people or deny them other rights, but simply because transgender activists often insist that the mere claim that one is a woman (or man) makes them so, regardless of whether they’ve had medical intervention. (This is the ACLU’s claim, for instance.) Ergo, anybody who wants to claim that they’re a woman, whether or not they’ve had surgery or hormonal intervention, is a woman and can compete in women’s sports.

And if the ACLU wants to die on that hill, and call people like me “transphobes,” let them, for their ideological insistence applied to all areas will eventually be the death of women’s sports—sports whose autonomy was fought for for years and now codified in Title IX. And if women’s sports die, or are taken over by transgender women, it will be the silence of biological women athletes that brings this about. 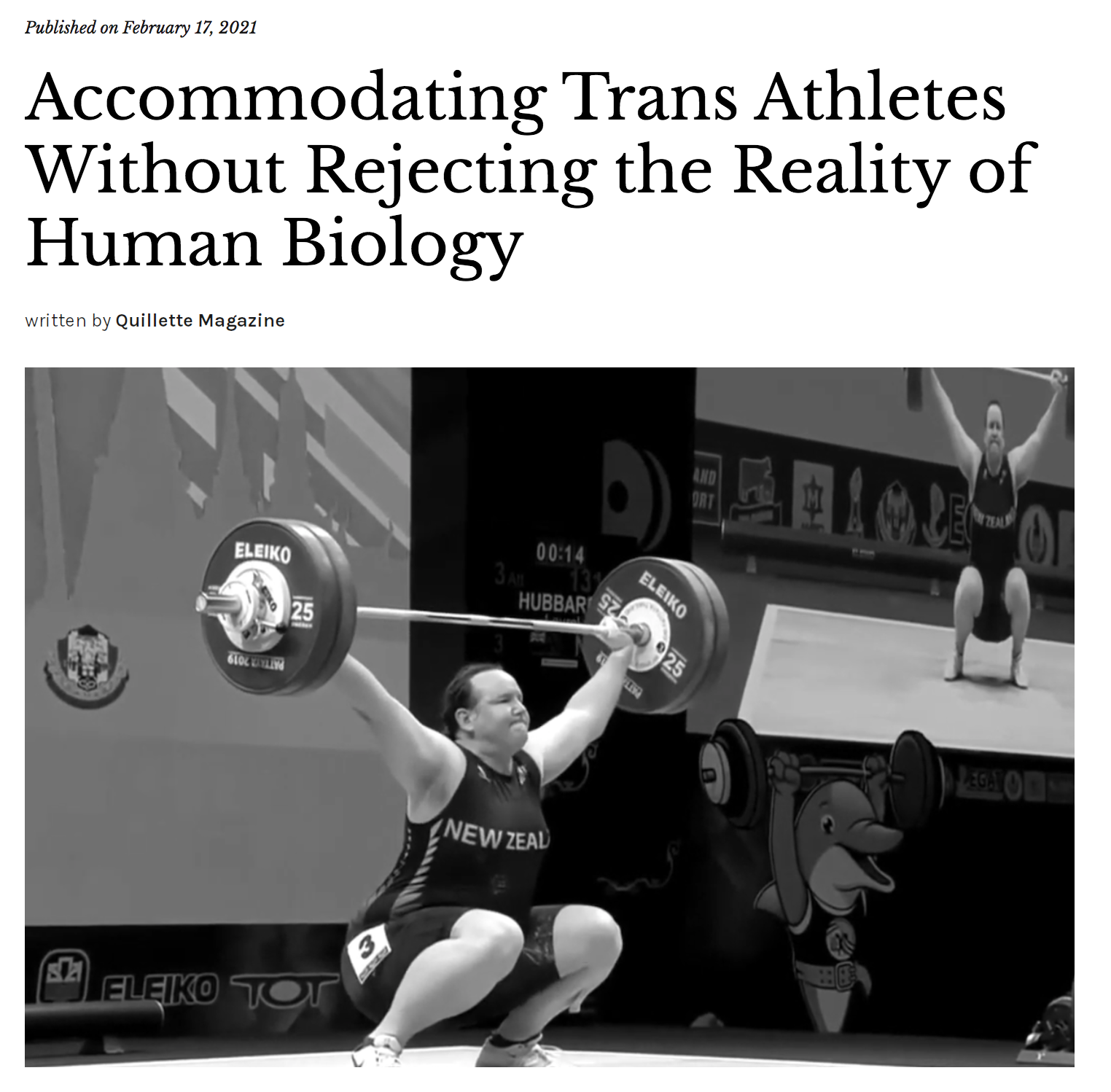 As a social psychologist, I understand why using women’s sports to argue against transgender rights works. But it is tough to imagine a more morally bankrupt position: “I’m going to make you sit in a gender that doesn’t fit you so my daughter can win her soccer game.”

This sounds good at first, but doesn’t deal with the fundamental unfairness that many perceive of biological men (some with surgery or hormone treatments, some not) competing against women whose physiology and morphology make them less liable to win in any physical competition. Further, the Quillette article proposes a solution that sounds workable for refuting the “making you sit in a gender that doesn’t fit you” argument.

First, nobody denies sex differences in sports; if there weren’t any, we wouldn’t have separate women’s and men’s sports. Here’s the performance advantage of biological males over biological females, separated by sport (caption below from a paper I mention below). These are differences between cisgender men and women:

One solution to these differential shas been the Olympic solution: a biological male can compete in women’s Olympic sports if their serum testosterone levels have been below 10 nanomoles/liter for a year before the competition. This, however, is more or less arbitrary, as this Guardian article below suggests. It reports on a newish study (right below it) showing that testosterone suppression does not remove all the sports advantages of being a biological male. 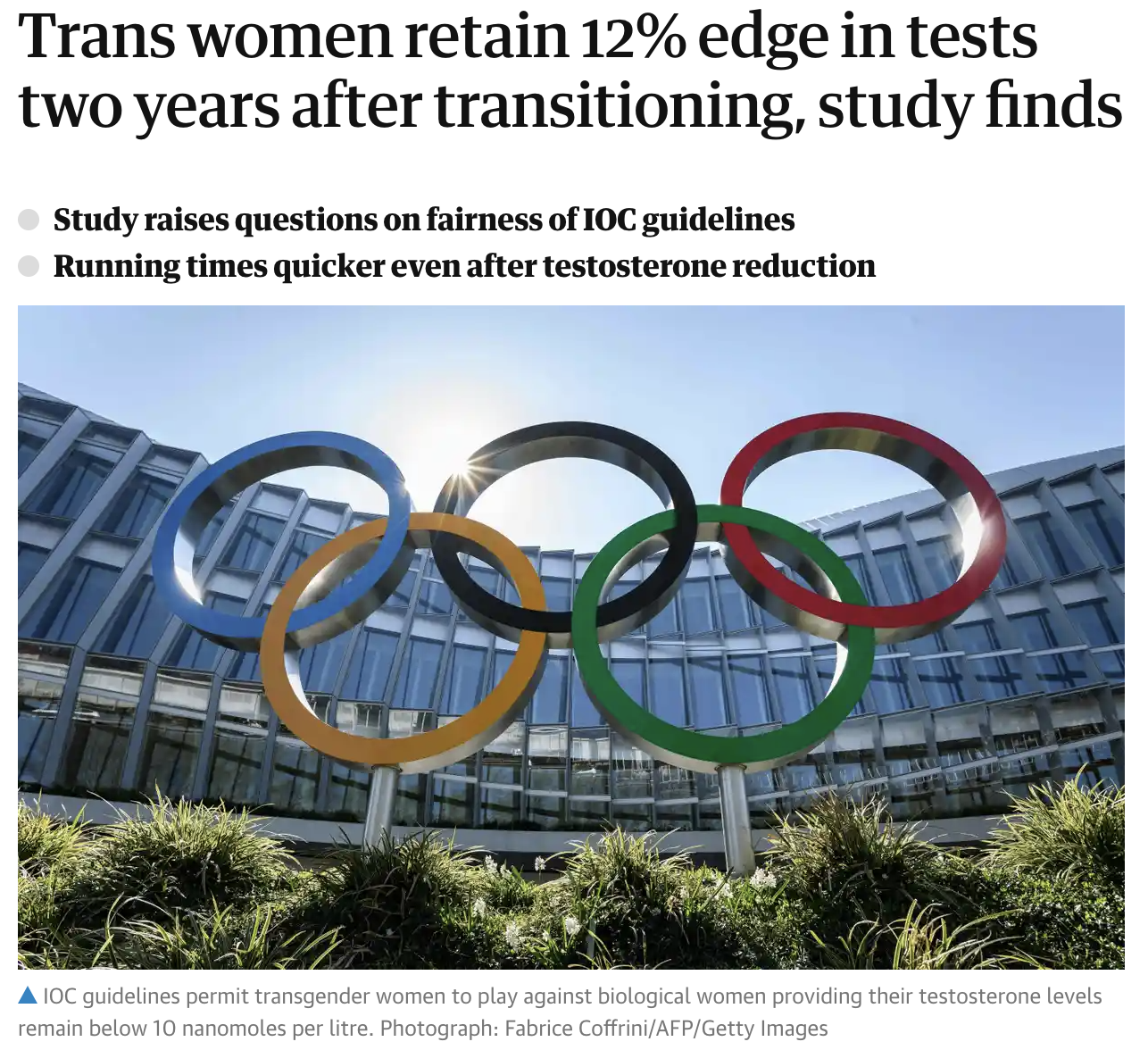 The article is based on the paper below in the British Journal of Sports Medicine (free, and free pdf download):

The summary from the Guardian: two years of testosterone suppression didn’t eliminate all the advantages of biological maleness, though it did for pushups and situps (but see caveats below).

However the new study, based on the fitness test results and medical records of 29 trans men and 46 trans women who started gender affirming hormones while in the United States Air Force, appears to challenge the IOC’s scientific position.

The research, published in the British Journal of Sports Medicine, found that before starting their hormone treatment trans women performed 31% more push-ups and 15% more sit-ups in one minute on average than a biological women younger than 30 in the air force – and ran 1.5 miles 21% faster.

Yet after suppressing their testosterone for two years – a year longer than IOC guidelines – they were still 12% faster on average than biological females.

The trans women also retained a 10% advantage in push-ups and a 6% advantage in sit-ups for the first two years after taking hormones, before their advantage disappeared. But the researchers say they “may underestimate the advantage in strength that trans women have over cis women … because trans women will have a higher power output than cis women when performing an equivalent number of push-ups”.

The paper below, published in Sports Medicine, concludes that even after three years of treatment, transgender women still retain advantages over biological women in nearly every physiological, morphological, and performance test reviewed, and sometimes those advantages were considerable.

We already know that the ACLU, while engaging in its admirable work on civil rights, including transgender rights, has gone off the rails with the latter, insisting that transgender women must be equal to biological women in every respect. This is largely due to the zealotry of the ACLU’s Deputy Director for Transgender Justice, Chase Strangio, who has done good work on trans rights but is a “trans fundamentalist” when it comes to sports.

Here are four claims that the ACLU has made and which Quillette critiques. Every claim is either misleading or wrong. I won’t discuss them (I’ve dealt with some before), as you can read the article:

Relevant to the last one about separate teams, here’s Quillette‘s solution:

One promising option, for instance, would be to preserve the traditionally defined female category while also rebranding the male category as an “open” category that’s available to anyone. This would allow a biologically male trans woman, or someone who is intersex, to test their speed, skill, and strength in a fair competition, while also not forcing them to submit to a designation they may find inaccurate or demeaning. Once overwrought ideological claims about the nature of gender identity are stripped away, in fact, open athletic categories may even provide a forum for real diversity and universal inclusivity, which is the ostensible goal of those demanding that women compete against male bodies.

As they note, this would be opposed by both conservatives and extreme Leftists, but my problem is different: the possibility, which I didn’t realize until I read the papers above, that testosterone supplements, which I think continue over life, may give an advantage to trans men over biological men in some areas.

What we know now is that arbitrary hormone limits, like the IOC’s, aren’t useful in light of data showing that even with testosterone reduction, trans women retain considerable strength, height, and muscle-mass advantages, acquired at puberty, over biological women. Dealing with that is a tough ethical and practical question.

As for transgender rights, all of us agree that with a few narrow exceptions like sports, incarceration, rape counseling, and the like, trans women should be considered the moral and legal equivalents of biological women. The rub is sports, and, as Quillette writes:

The most humane way to help and support transgender people isn’t to pretend that slogans and hashtags will magically transform them into something they’re not. It’s fine to say that “trans women are women,” full stop, as a matter of certain legal entitlements. But biology doesn’t care about what pronouns we use. And trans athletes shouldn’t be encouraged to inhabit a state of denial. There are creative strategies we can implement to invite, and even celebrate, the participation of trans athletes in all sports. But they can be implemented only once we admit the real differences that exist between the two—and only two—sexes.

I won’t go into why sex in humans is binary, as I’ve discussed that many times before. This article reiterates the data.

By the way, Quillette, could you please let us know who the authors of your articles are? Even the New York Times “editorial board” editors are known to the public. “Quillette Magazine” as an author tells us exactly nothing.

145 thoughts on “Once again, the question of transgender women competing in women’s sports”