Glenn Greenwald is a mixed bag, and though I generally agree with what he has to say, I’m not a fan of his angry and often self-aggrandizing tone. That tone is on display in his new Substack column, but it’s a good column and well worth reading. (Substack is now the go-to place for disaffected journalists; Greenwald went there when he parted ways with The Intercept.) I don’t think I’ll subscribe, but I did get a note to look at today’s piece, which you can read for free by clicking on the screenshot below. And you should, while considering whether you want to ante up $50 per year. (This seems to be the standard fee for our comrades at Substack.) 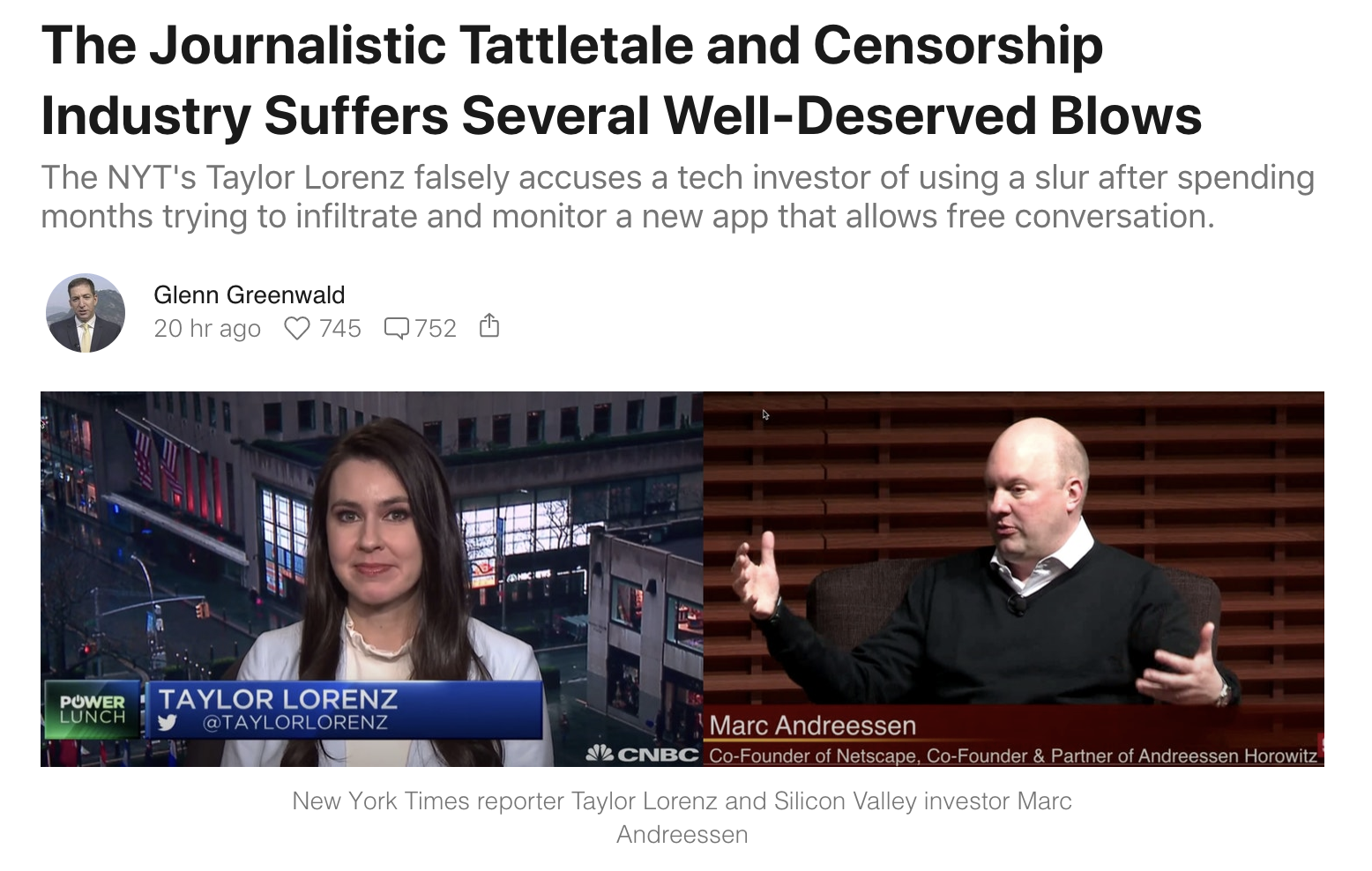 Greenwald takes out after those “journalists” who spend their time monitoring others, often in online chatrooms, to call them out for using ideologically impure language or for other political transgressions. He recounts the Donald McNeil “n-word” firing from the New York Times that we discussed the other day, and has a few other choice tidbits of journalistic malfeasance. But first, his general take:

I’ve written before about one particularly toxic strain of this authoritarian “reporting.” Teams of journalists at three of the most influential corporate media outlets — CNN’s “media reporters” (Brian Stelter and Oliver Darcy), NBC’s “disinformation space unit” (Ben Collins and Brandy Zadrozny), and the tech reporters of The New York Times (Mike Isaac, Kevin Roose, Sheera Frenkel) — devote the bulk of their “journalism” to searching for online spaces where they believe speech and conduct rules are being violated, flagging them, and then pleading that punitive action be taken (banning, censorship, content regulation, after-school detention). These hall-monitor reporters are a major factor explaining why tech monopolies, which (for reasons of self-interest and ideology) never wanted the responsibility to censor, now do so with abandon and seemingly arbitrary blunt force: they are shamed by the world’s loudest media companies when they do not.

Just as the NSA is obsessed with ensuring there be no place on earth where humans can communicate free of their spying eyes and ears, these journalistic hall monitors cannot abide the idea that there can be any place on the internet where people are free to speak in ways they do not approve. Like some creepy informant for a state security apparatus, they spend their days trolling the depths of chat rooms and 4Chan bulletin boards and sub-Reddit threads and private communications apps to find anyone — influential or obscure — who is saying something they believe should be forbidden, and then use the corporate megaphones they did not build and could not have built but have been handed in order to silence and destroy anyone who dissents from the orthodoxies of their corporate managers or challenges their information hegemony.

He particularly dislikes the New York Times‘s tech reporters, and tells a pretty disturbing story about how one of them, Taylor Lorenz, went onto a new private chat site called “The Clubhouse”, reported that Silicon Valley entrepreneur Marc Andressen had said the “r-word” (“retarded”, rapidly approaching the n-word in offensiveness), and then broadcast it on Twitter, at the same time showing photos of the other discussion participants and calling them out for “not saying anything”. Have a gander at this grade-school bit of tattling: 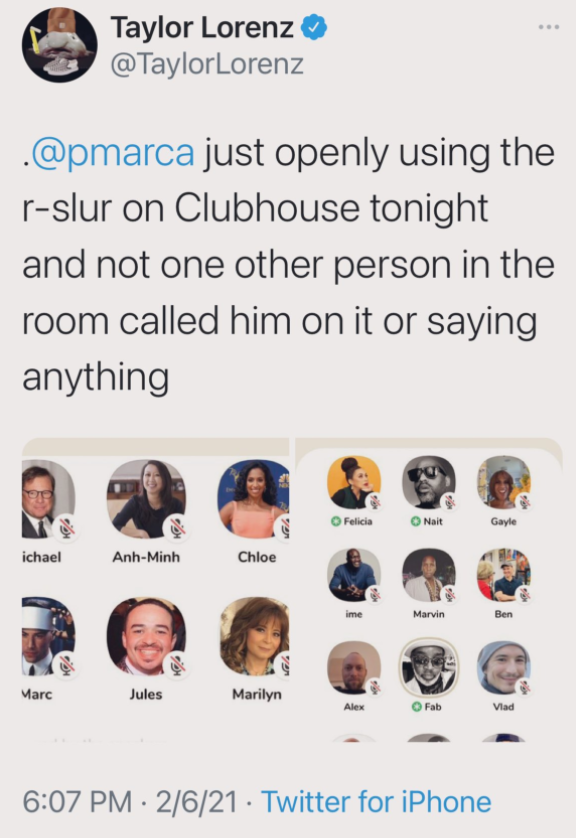 Remember, this is a star tech reporter for the New York Times. But the worst part is that Lorenz lied: Andressen had not said the word—somebody else did, and it was in reference to a discussion of a GameStop group on reddit who call themselves the “retard revolution”.  Besides the lying and the doxxing, there’s clearly a difference between using “retard” as an insult (especially towards someone who is mentally deficient), and describing a group that calls themselves that. It’s the same difference in kind between McNeil’s use of the n-word when repeating what a student had told him, and its use as a real racial slur. For some reason the New York Times staff don’t seem to grasp differences of intent. Actually, as I mentioned in the McNeil piece, they really do, but don’t give a rat’s patootie what the intent is: what matters is only how the word makes someone feel that determines whether its user should be damned. And when another participant called Lorenz out for her lying and distortion, she didn’t apologize, but just emphasized feelings. More immature behavior: 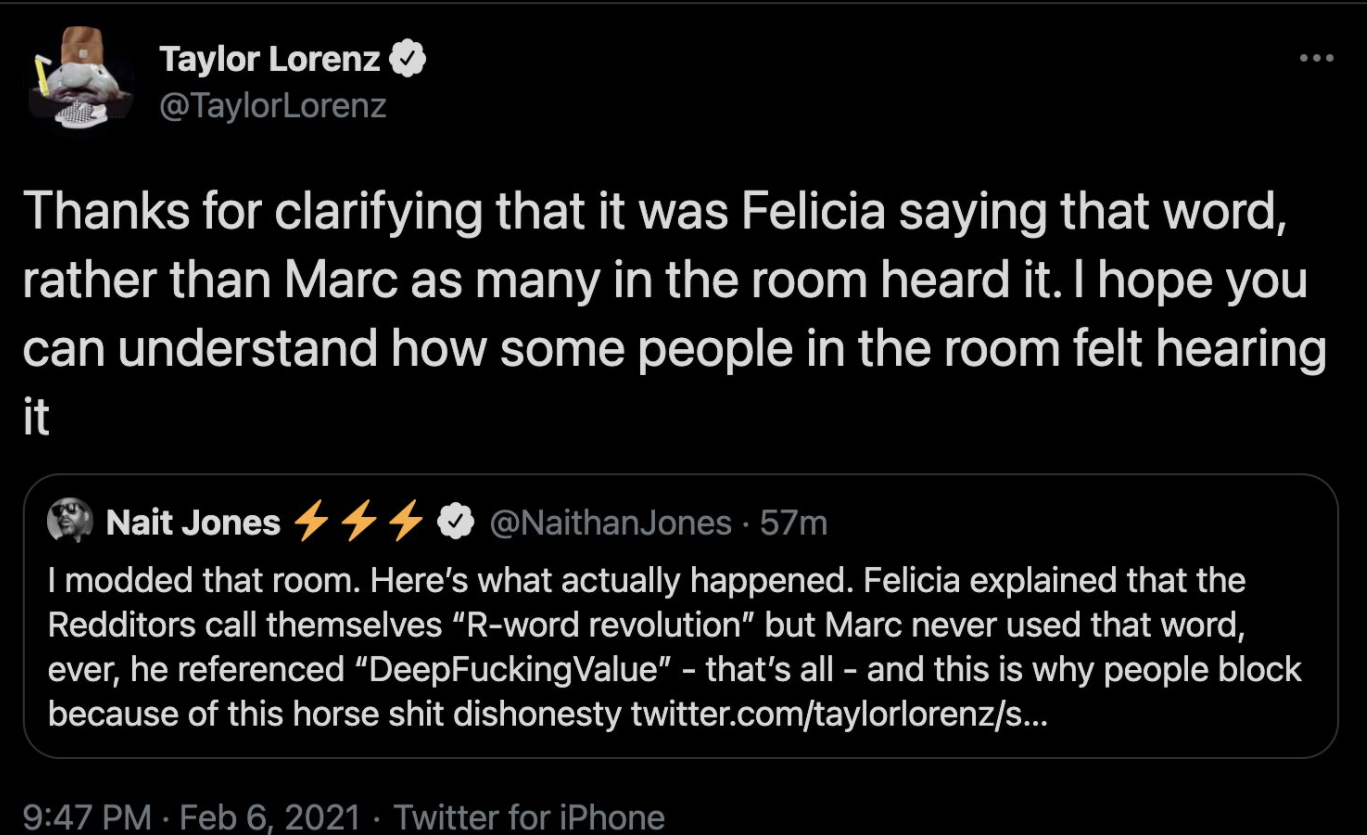 Then Lorenz closed her Twitter account, as if, Greenwald notes, she were the victim. In fact, Lorenz had, after being blocked from the “Clubhouse” private group, obtained a fake account and mocked Andersson for blocking her:

It is unbelievable that reporters, especially for the Paper of Record, can behave in such a petty and childish way. They have no right to insinuate themselves into private groups to eavesdrop, much less to act as hall monitors and go squealing to the general public if someone isn’t ideologically pure. Greenwald calls them out properly, though his assertion of personal purity in covering the Right Stories still irks me from time to time:

To declare any discussion of that term off-limits — as Lorenz tried to do — is deeply anti-intellectual. To pretend that there is no difference in the use of that term by the Redditors and its discussion in Clubhouse on the one hand, and its malicious deployment as an insult to the cognitively disabled on the other, is dishonest in the extreme. To publicly tattle on adults who utter the term without any minimal attempt to understand or convey context and intent is malicious, disgusting and sociopathic.

But this is now the prevailing ethos in corporate journalism. They have insufficient talent or skill, and even less desire, to take on real power centers: the military-industrial complex, the CIA and FBI, the clandestine security state, Wall Street, Silicon Valley monopolies, the corrupted and lying corporate media outlets they serve. So settling on this penny-ante, trivial bullshit — tattling, hall monitoring, speech policing: all in the most anti-intellectual, adolescent and primitive ways — is all they have. It’s all they are. It’s why they have fully earned the contempt and distrust in which the public holds them.

There are more reports by Greenwald, but I’l just give one regarding the American Civil Liberties Union (ACLU) staff lawyer Chase Strangio, a transgender man who fights for transgender rights. We’ve met Strangio twice (here and here), once defending Connecticut’s law stipulating that surgically and medically untreated biological males who identify as women should be able to compete in women’s sports.  In the other post, I showed how he demanded for actual censorship of Abigail Shrier’s new book Irreversible Damage, which calls for great care in allowing very young women (young teenagers and below) to undergo medical treatment for transitioning to the male gender.

Lately the ACLU has taken up transgender rights in a big way. There’s nothing wrong with that, of course: transgender people’s rights should be defended. But I do object to the ACLU’s claim that transgender women are women in every respect, regardless of medical treatment, so long as they claim to identify as women. Sports and issues like prison choice and rape counseling are the stumbling blocks here.  And I do object to Strangio, in his tweet below, characterizing Shrier, along with J. K. Rowling, as “closely aligned with white supremacists in power and rhetoric.” That is defamation, a slur, and a lie.  If the ACLU were the New York Times, they would fire Strangio for a scurrilous and misleading tweet like the following. Oh, wait—no they wouldn’t!

The reality is that people like JK and Shrier and all the rest of them are closely aligned with white supremacists in power and their rhetoric in turn creates dangerous policy proposals and eventually laws. We have a lot of mobilizing to do. https://t.co/YltsTKIc1s

The overarching rule of liberal media circles and liberal politics is that you are free to accuse anyone who deviates from liberal orthodoxy of any kind of bigotry that casually crosses your mind — just smear them as a racist, misogynist, homophobe, transphobe, etc. without the slightest need for evidence — and it will be regarded as completely acceptable. That is the rubric under which the most famous lawyer of the ACLU, an organization once devoted to rigid precepts of due process, decided on Saturday to brand two of his ideological opponents as “closely aligned with white supremacists.” Fresh off being named by Time Magazine as one of the planet’s 100 most influential human beings — this is someone with a great deal of power and influence — trans activist and ACLU lawyer Chase Strangio decided to spew this extremely grave accusation about J.K. Rowling and Abigail Shrier, both of whom oppose the inclusion of trans girls in female sports. . . .

As I’ve written before, I’m not in agreement with those who advocate this absolute ban. I’m open to a scientific consensus that develops hormonal and other medicinal protocols for how trans girls and women can fairly compete with CIS women in sporting competitions. But that does not entitle you — especially as an ACLU lawyer — to just go around casually branding people as “closely aligned to white supremacists” who have never remotely demonstrated any such affinity, just because you feel like it, because you crave the power to destroy your adversaries, or are too slothful to engage their actual views.

But this is absolutely acceptable behavior in mainstream and liberal circles.

This is absolutely true. In fact, the New York Times staff acts as a single cudgel against people like James Bennet and Donald McNeil, demanding blood as if they were spectators at a Roman gladiator battle.

At the end of his piece Greenwald gets a little defensive, clearly hurt by people who called him a misogynist after he recently attacked Alexandria Ocasio-Cortez for rejecting Ted Cruz’s offer to work with her on the GameStop affair. Greenwald objected to AOC’s claim to Cruz that “you almost had me murdered.” Greenwald considered that hyperbolic, and it was. But though he’s defended AOC many times, this one critique was too much for her woke supporters, who branded Greenwald as a “misogynist”. In this piece he spends too much space defending himself and recounting his past support of AOC, when he really should have ignored the slurs completely. If Greenwald has one fault that mars his journalism, it’s that his skin is too thin, and it shows in his work.

Beyond that, it’s a good piece and deserves to be read, for it presages the decline of respectable journalism in America.