When I get the urge to watch a movie during the pandemic, I usually find one by Googling “Best movies of 20–“, concentrating on recent years, and scan the lists for something I haven’t heard of but that the critics liked. That’s the way I found this one: “Ash is Purest White“, a Chinese drama made in 2018. I’d never heard of it, but it was on many critics’ lists, and Rotten Tomatoes gave it a great overall critics review (click on screenshot to see the site and unanimity of opinion):

The disparity here between the critics’ score and the audience score is likely to rest on the unusual nature of the film. It not only portrays life in a backwater part of China, and a culture unfamiliar to many Americans and Brits, but also is extremely slow-moving compared to most movies (it’s 2 hours and 15 minutes long). There is only a tiny bit of action (some brief violence, despite the advertising with the gun), and no chase scenes. It is a character drama, and its beauty rests on the slow pace and the wonderful acting, especially of the two co-stars Tao Zao (a well known actress married to the director, Jia Zhangke) and Liao Fan, who plays her small-time gangster boyfriend.  In its deliberate pace and revelation of the characters, it’s comparable to Tokyo Story, my second favorite foreign film (after Ikuiru), a film I’ve recommended to many but few seem to like. Both of those films are also movies about character rather than plot, and both are set in postwar Asia. (If you want to see Professor Ceiling Cat’s list of the ten best movies of all time, go here.)

My theory, which is mine, is that modern audiences, weaned on action films with lots of chase scenes, violence, and drama, are baffled by a slower films about character in which not a lot “happens”. But critics still appreciate that style of movie, ergo the film’s high ratings. And in this one I’m definitely on the critics’ side. The film is terrific—a must-see and a tour de force of acting.

After I watched the movie, I read some of the reviews (I never do that before I watch a movie, though I’ll look at the ratings), and I think most critics have missed what I see is the film’s point: the contrast between constancy and change.  The constancy is in the affection of Tao Zao, who plays Qiao the “moll” of Fan, who himself plays Bin, a two-bit crook in the town of Datong in the northern province of Shanxi. The change is that of China itself—a rapid change in the movie’s span of 17 years. I’ll try not to give spoilers (and if you don’t want to know anything about the plot, skip the next bit).

As I said, the film spans 17 years beginning in 2001, when Datong is a smallish town.  As a self-styled tough guy, Bin gets a gun—highly illegal in China. His relationship with Qiao seems distant, but they’re clearly involved.  During an altercation, Bin is attacked by wannabee gangsters, and Qiao fires the gun to chase off his assailants. She’s arrested and, to protect Bin, refuses to admit that it was Bin’s gun. She’s sent to prison for five years.

When she gets out, she returns, looking for Bin and assuming he’s waited for her. He hasn’t: he has a new girlfriend. They part after one of the most affecting scenes in the movie—when Qiao is determined to make Bin tell her explicitly that their relationship is over. It’s at this point that you realize how wonderful the acting is. The scene takes a long time, few words are exchanged, and the emotions are played out largely through Tao Zao’s facial expressions. It’s one thing to act with movement and dialogue, but an entirely different matter to mesmerize the audience with one’s facial expressions alone. And in that way she runs through an entire gamut of emotions in this long scene. She a stunning actress.

They part for many years, with Qiao encountering many bizarre characters, including a travel agent who asks her to join him in his venture to create “UFO tourism”.  Eventually she and Bin reunite, but his circumstances have changed for the worse. Yet despite her saying that she has “no feelings” for Bin, she stays with him to the movie’s end, pushing him about in a wheelchair and resigned to her life as a cook and boss of a gambling den back in Datong. He is the one who eventually leaves. The entire time, thRough all the changes in China (symbolized by a boat trip through the Three Gorges, soon to be destroyed by a dam) and the changes in Bin, she remains, as always, faithful in her affection and self-sacrificing, yet also strong.

The plot as I described it may not excite you, but I recommend the film highly. Its attraction is in Qiao’s character and her portrayal by Tao Zao. You can’t take your eyes off her. Liao Fan also gives a fine performance.

The film was included by Barack Obama on his “favorite films of 2019” list:

Next up are my favorite movies and TV shows of 2019. Of course, there’s also American Factory, a film from our own production company, Higher Ground, that was recently shortlisted for an Oscar. Here’s the full list: pic.twitter.com/PEcgwotcxm

I’ve seen “Ford vs. Ferrari”, “The Irishman”, and “Parasite”, and do intend to see “Marriage Story”. If Obama liked “Ash is Purest White,” maybe you will, too!

You can see a 38-minute YouTube discussion by the director here; it was filmed when the movie was previewed at Lincoln Center.

The movie poster for the release in China: 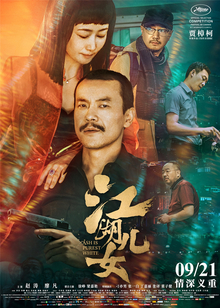 The comments below, of course, are the place for you to recommend good movies you’ve seen recently: it’s a useful feature for all of us.