A new paper in Scientific Reports, which you can access below, describes the world’s smallest known reptile, a miniscule chameleon found in a small area of Madagascar, and named Brookesia nana. Indeed, it’s the smallest of all known amniotes, a group that includes reptiles, birds, and mammals. Two individuals of this species these were caught in 2012—a male and a female—and were just described as members of the new species.

First, a photo, just to show you how small it is. Below is an adult male, the “holotype” specimen (the one preserved individual used to characterize and represent the entire species). It sits comfortably atop a fingertip.

The size of this bad boy: its snout-to-vent length is 13.5 mm (0.53 inches!), and total length including the tail is 21.6 mm (0.85 inches). It’s about half an inch long: get out a ruler to see how small that really is! The female specimen, captured around the same time, is a bit bigger: 19.2 mm snout-vent length and 28.9 mm total (0.76 inches and 1.13 inches, respectively).  Here are a few more pictures of both specimens (sadly, they killed both individuals to preserve them):

Click on the screenshot below to see the paper, or get the pdf here. The full reference is at the bottom, and there’s a short popular precis at IFL Science.

The species resides in a group (“clade”) of other miniature chameleons in the genus, with none longer than 30 mm total. The species name nana comes from the same Greek-Latin root that gives us “nano”, meaning “small.” The authors also did DNA analysis to place the species within its group, but we needn’t go into that, as the results are useful only to herpetologists.

The interesting thing about this species, as well as its relatives, is that they’re tiny and also extremely geographically restricted. They’re all found in montane (“mountainous”) rainforest. Here’s a distribution map of the related species in Madagascar, and you can see that no species was found outside of a range of about 100 km (60 miles). B. nana (yellow star) was found in only one place, and there may be very few individuals in the species. Most of the species are likely to be endangered: the authors note that the habitat of B. nana (now in a supposedly “protected area”) is being nibbled away by human depredation through slash-and-burn agriculture. If these things can breed in captivity, they might get a few in, for Madagascar is known for the loss of endemic species due to human disturbance.

All of the relatives of B. nana have females that are larger than the males, which is unusual for reptiles.  B. nana, like its relatives, is an insect eater, and is probably arboreal (lives in trees), though the latter isn’t clear from the paper, for collecting information isn’t detailed.

A few other features of this group deserve mention. Unlike many chameleons, they lack head ornaments and spines or tubercules on their backs.  Why? We don’t know.  We also have no idea why individuals are so small, as their habitats don’t seem to particularly favor the evolution of miniaturization. It’s possible, but unlikely, that the two individuals they found happen to be extraordinarily small specimens, and not close to the species average. However, that would be a remarkable coincidence since they were found several days apart and were both sexually mature.

[Addendum by GCM: Brookesia nana may not be the world’s smallest lizard species, although it’s at least close. Reptiles have fairly indeterminate growth, so with a sample size of one of each sex, it’s hard to know what the maximum size is. I know a gecko species from the British Virgin Islands that has a maximum snout-vent length of 16 mm in males and 18 mm in females; I don’t know the species’ minimum size at sexual maturity. Body size in lizards is often reported as the maximum size known, which of course has problems as a statistic because it’s dependent on the outliers. To overcome this, Tom Schoener, in his studies of body size evolution and ecology of West Indian anoles, used to report the mean of the largest third of the sample as his body size statistic. With a sample of 1 per sex, this can’t yet be usefully done for the new species.]

One trait that may be comprehensible is the relatively large genitals of male B. nana. Like all lizards and snakes, males have a “hemipenis”, or bifurcated penis. Individuals mate by using only one of the two sides in each mating, alternating between matings. Because the female of this species is larger than the male by a substantial amount, nearly 50% (again, we don’t know why this disparity exists), the male has to have a relatively longer equipment to transfer sperm to the female.   Here’s the male with the right hemipenis sticking out:

And closeups of the extruded left hemipenis, which is itself bifurcated. 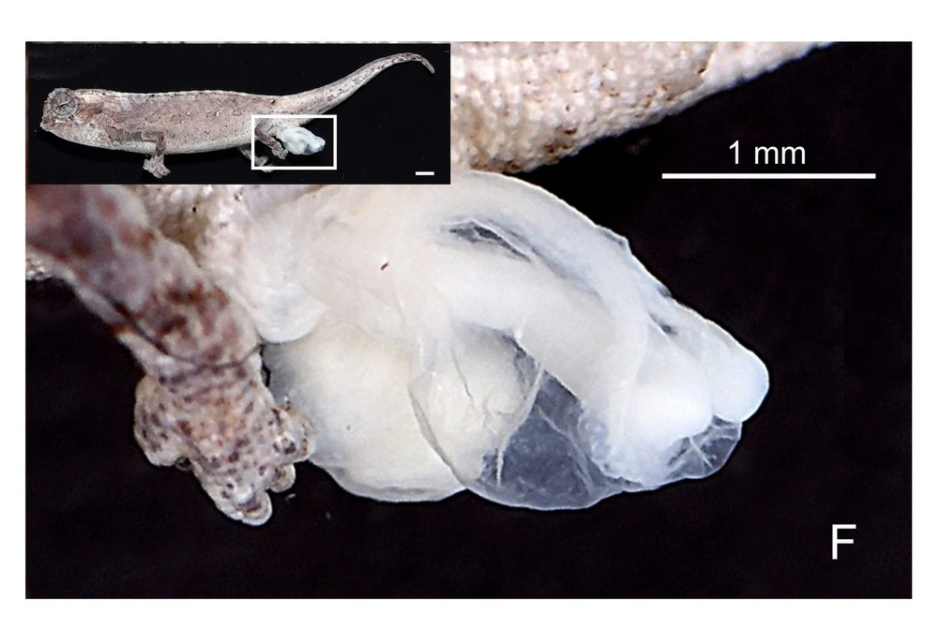 So we have the tiniest reptile known, one smaller than any other amniote, but also a well-endowed one. It’s ineffably cute (blunt snout, big eyes—all the traits that appeal to humans in baby animals), but also endangered. Right now we know very little about its ecology and behavior, though we know where it sits phylogenetically within its group of relatives. And we may not know a lot more before the species goes extinct.