How about a little levity to start the week? Inadvertent levity, that is, for the perpetrator of this “fake news”, Fatah, is the ruling party in the West Bank, and the levity is meant to be propaganda. Fatah is the biggest of the organizations/political parties under the aegis of the Palestinian Liberation Organization. Mahmoud Abbas is the head of both Fatah, the PLO and, of course, president of Palestinian Authority.

If you pay attention to the “news” put out by various Palestinian state media, of which Fatah is one, you’ll find all kinds of amusement amidst the lies. For example, Fatah regularly asserts that Mossad, the main organ of Israeli intelligence, trains animals to attack Palestinians and others. These include rats trained to bite Arabs in Jerusalem, wild pigs trained to destroy Palestinian fields, and sharks trained to attack European tourists in Egypt to damage the Egyptian tourist industry. There’s even a Wikipedia page on this issue called “Israel-related animal conspiracy theories.” It’s hilarious (check out the references).

Fatah also argued that Jews poison their wells, used the disaster in Haiti to harvest human organs for transplantation into rich Jews, and that Jewish archaeologists plant fake “proof” of ancient Jewish presence in the Holy Land.

The thing is (is) that many Palestinians and Arabs believe this stuff. The latest and perhaps biggest whopper is the one below, again promulgated by Fatah: the British stole Big Ben from the British Mandate of Palestine (the area where Jews and Arabs lived after the Ottoman Empire collapsed), and took Big Ben to London, where it now chimes daily.

If you ask how people can believe this guff, well, ask yourself why so many Americans believe in QAnon.? The power of confirmation bias is strong.

Here’s a Palestinian woman who firmly believes the Purloined Big Ben Theory. If you speak Arabic, feel free to translate some of it.

This #Palestinian woman explains that Big Ben in London is actually Palestinian. It used to be in Jerusalem at Jaffa Gate and everyone would hear it chiming, but the British took it to Britain in 1922 during the Mandate. Inshallah one day it will be returned to the #Palestinians. https://t.co/BQQea0rxY5

And here’s the article from the official Fatah news showing the supposedly stolen clock in situ in the 1920s (click on the screenshots to go to the site): 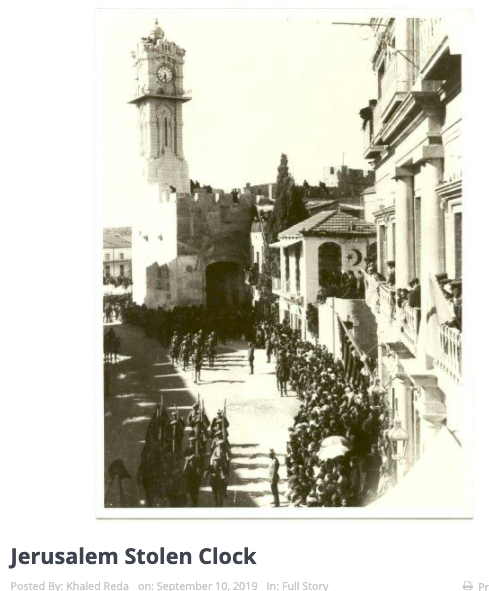 And the entirety of their article. Note the claim that Big Ben was taken to the British Museum! 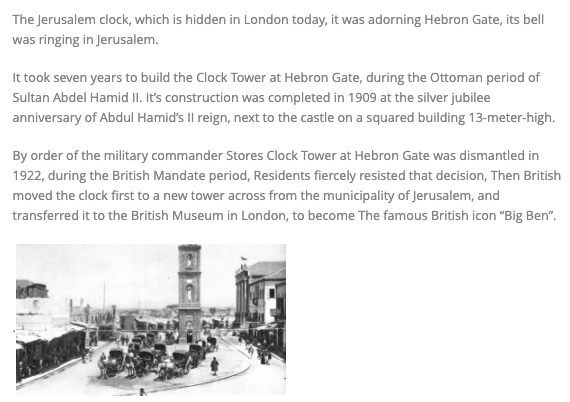 Well, it takes about ten seconds of Googling to dispel this fiction. According to Wikipedia, the clock tower in England (it’s the bell itself that’s formally known as “Big Ben,” not the whole clock or the tower) was completed in 1859, well before the supposed theft.  And the clock’s movement was finished in 1854, five years before it was put into the tower.

Of course, I suppose you could always claim that Wikipedia was a Jewish conspiracy. . .

We can be thankful that the New York Times hasn’t gone this far—yet.

26 thoughts on “Fatah: London’s Big Ben was stolen from Palestine!”