First, the good news and the numbers (and here are the ten Republican Representatives who voted for impeachment).

Finally, it’s Feast of the Ass, which, though it sounds bizarre, was a medieval Christian holiday.

Trump has been impeached, but it’s unlikely that the Senate will start a trial before Biden is inaugurated. The outcome could still bar Trump from holding federal office ever again (though this isn’t certain even if he’s convicted), and of course it does nothing to get him out of office. Trump is trying to make amends, but it’s too late. As the NYT reports:

Not long after the vote on Wednesday, Mr. Trump released a video condemning the violence and urging his followers to avoid a repeat in “the coming days both here in Washington and across the country” as federal authorities warned of a nationwide wave of violence surrounding Mr. Biden’s inauguration. But the president did not mention his own role in instigating the violence or apologize, nor did he concede or mention Mr. Biden’s name.

Mr. Trump recorded the video under pressure from aides, who have warned him that he faces potential legal exposure for the riot, which took place after a speech in which he urged supporters to “fight” the election results.

Martin spoke after the long-awaited release of a 3,000-page report from the Commission on Mother and Baby Homes, which investigated conditions for the 56,000 unmarried mothers and 57,000 children who passed through the system — at 18 homes run by the state and by Catholic charities — from 1920 until 1998, when the last facility was shuttered.

The unmarried mothers, often destitute, desperate and young, with nowhere else to turn, sought last-ditch refuge in the homes or were shoved into them, having been cast out by their families.

Infant mortality at the institutions was in many years double the national average. Some 9,000 infants died — 15 percent of all those who were born in the system — a statistic the investigators call “appalling.”

Most of the babies who survived were offered up for adoption, including in the United States, often without full consent by the mothers.

The Irish leader said his society had suffered from a “warped attitude to sexuality and intimacy,” with a “very striking absence of kindness.”

Catholicism, and its disapprobation of extramarital sex, is at the bottom of all this, of course. Of course defenders of Catholicism will say that this isn’t the “real” faith, but that’s not true.

A few days ago, an appellate court stayed the execution of Lisa Montgomery, but the Supreme Court intervened and rejected that appeal, ordering in effect her execution.  She was put to death yesterday in Terre Haute—the first woman executed in a federal prison since 1953. Now I don’t think that there’s anything different from executing a man versus a woman (many people seem to think it’s worse to execute a woman than a man), but I oppose all executions, and for Montgomery in particular there was palpable evidence that she was mentally ill. Trump could have stayed her execution, but he didn’t, and hence she died. Two more federal prisoners are scheduled to die before the Inauguration. Biden, of course, would have halted these executions and the barbarism attendant to them. You can read Sister Helen Prejean’s letter opposing Montgomery’s execution here.

Two pet cats in California have been found after going missing for over three years after fires and landslides: Mordecai Jones and Patches.  Their staff are, of course, elated. Both cats were identified from their microchips, so get your cat chipped, even if it’s an indoor cat (it could escape).

Finally, today’s reported Covid-19 death toll in the U.S. is 384,804, a big increase of about 4,000 deaths from yesterday’s figure, or about 2.8 deaths per minute. In less than a week we’ll pass 400,000 deaths: double what the most pessimistic pundits thought we’d have. The world death toll is 1,988,923, a big increase of about 16,600 deaths over yesterday’s total. That’s about 11.5 deaths a minute—roughly one every five seconds. We’ll pass 2 million deaths worldwide by tomorrow.

Stuff that happened on January 14 includes:

Amundsen’s team, of course, beat Scott’s to the South Pole by a month, and every one of Scott’s team died on the way back. Here are their routes: the pink bit at the bottom is the Ross Ice Shelf: 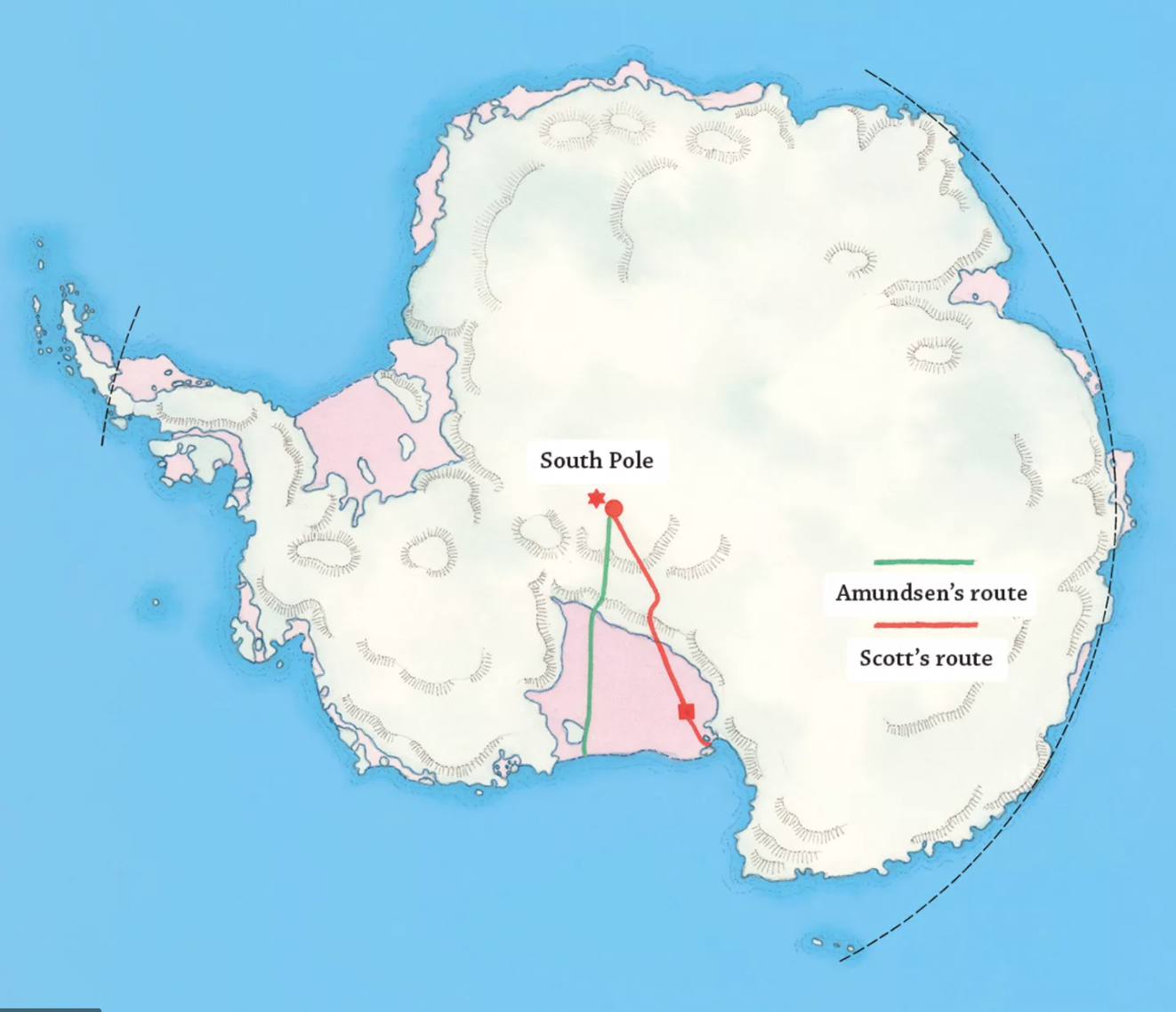 Although this show has been broadcast continually for 68 years, it’s only #5 on the list of long-running U.S. television shows. Can you guess the winner or the other four? (Go here for the answer.)

Ah, the good old days, when the world was going to be transformed—or so we thought. Here’s the full program of the Be-In (less than half an hour); you’ll recognize some of the participants if you’re of “a certain age”:

Winogrand was a great street photographer, who died young with 2,500 rolls of film undeveloped. Here’s one of his photos: 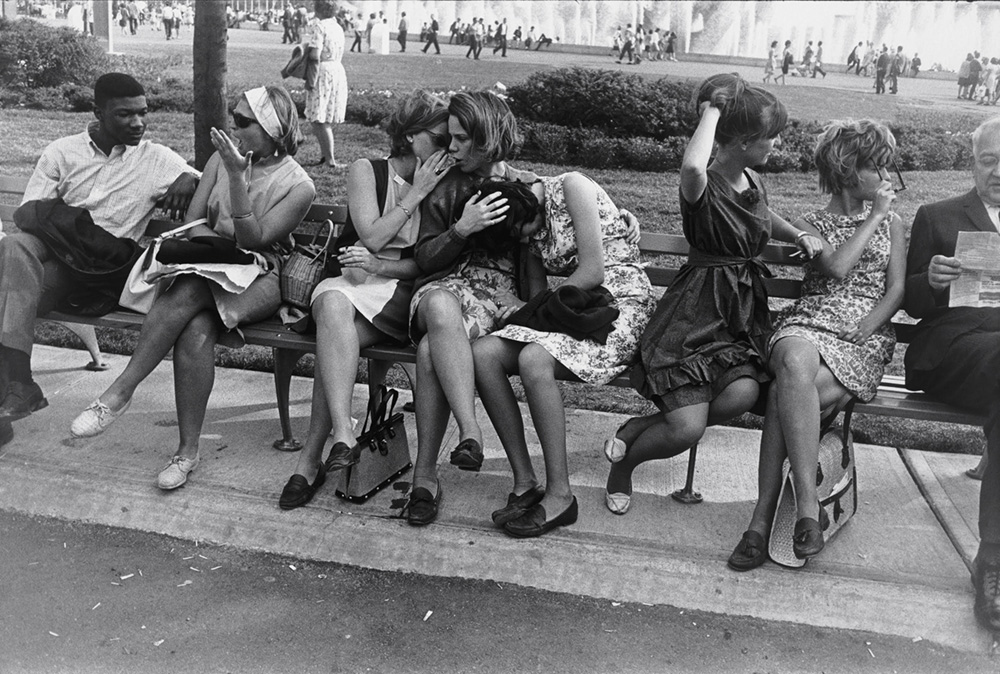 Here’s Dowd diagnosing Trump’s narcissism. This is in fact the first time I’ve ever seen a video of her:

Those who breathed their last on January 14 include:

Later in his life, Gödel suffered periods of mental instability and illness. Following the assassination of his close friend Moritz Schlick, Gödel had an obsessive fear of being poisoned; he would eat only food that his wife, Adele, prepared for him. Late in 1977, she was hospitalized for six months and could subsequently no longer prepare her husband’s food. In her absence, he refused to eat, eventually starving to death. He weighed 29 kilograms (65 lb) when he died. His death certificate reported that he died of “malnutrition and inanition caused by personality disturbance” in Princeton Hospital on January 14, 1978. He was buried in Princeton Cemetery. Adele’s death followed in 1981.

Couldn’t Gödel prepare his own food, or just open a can of beans?

Meanwhile in Dobrzyn, Hili’s worried about her social-media accounts:

Hili: I have a different opinion.
A: About what?
Hili: I can’t say because they would close my account. 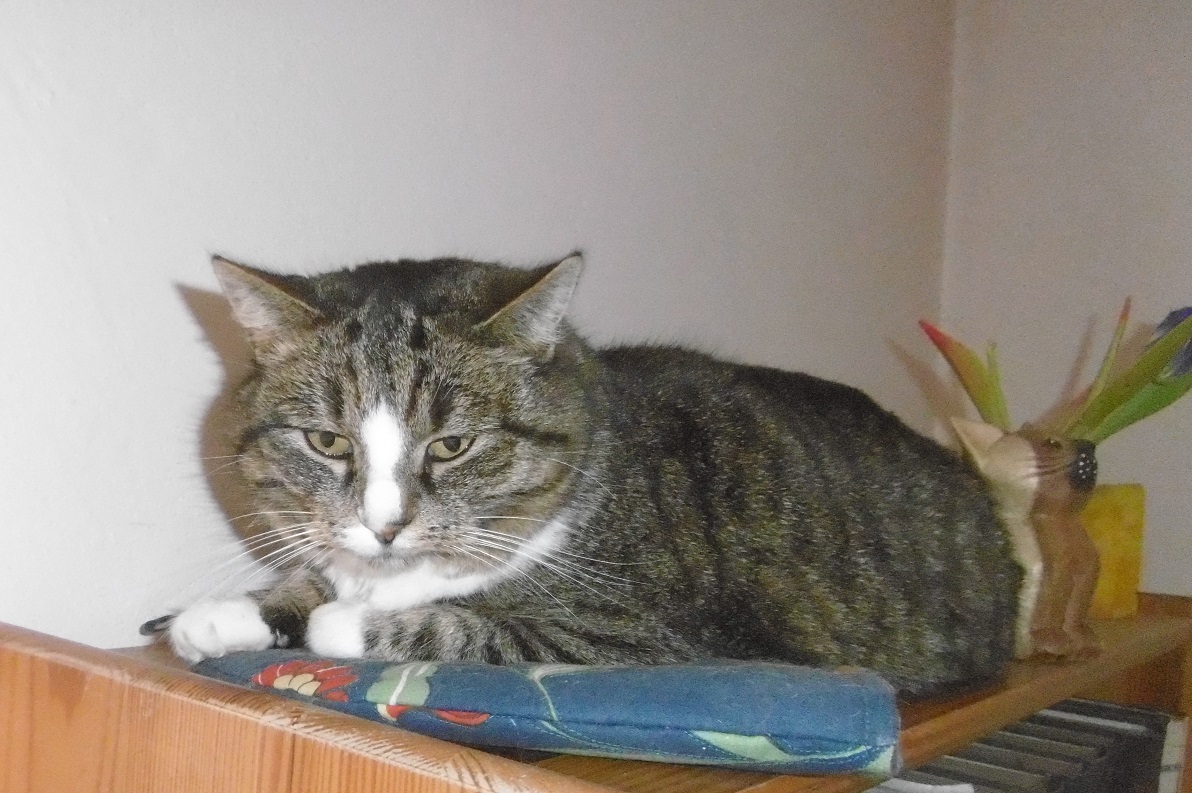 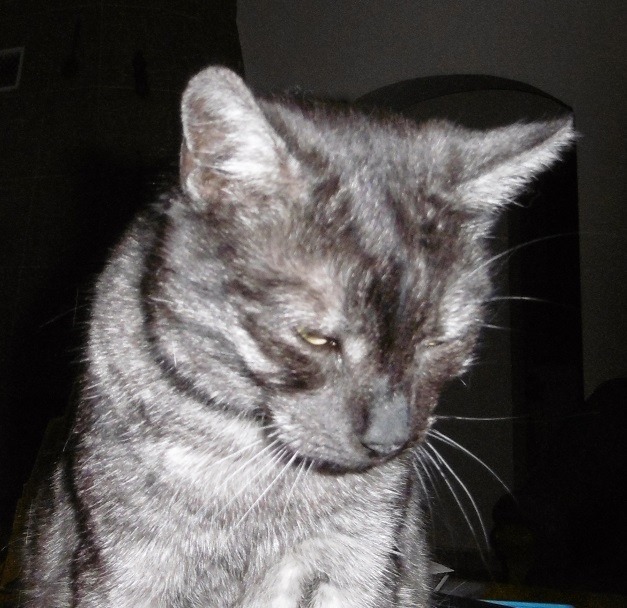 Two memes from the Internet: 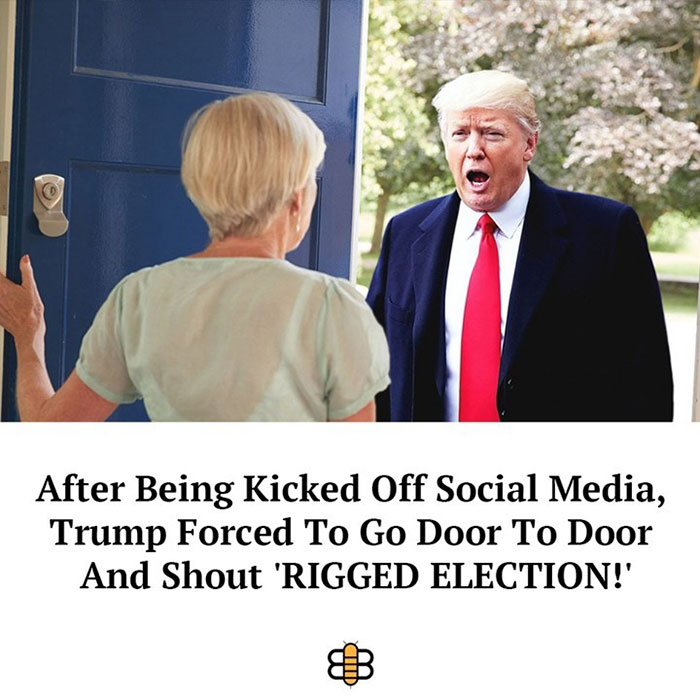 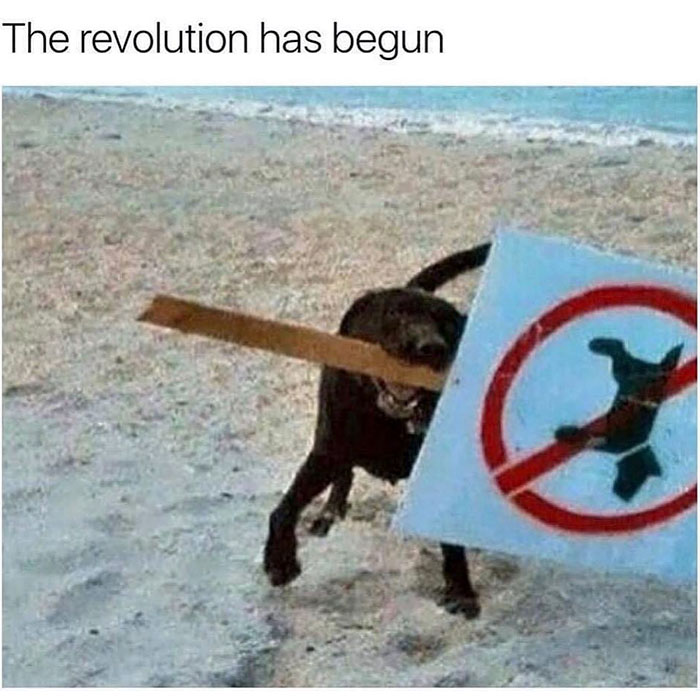 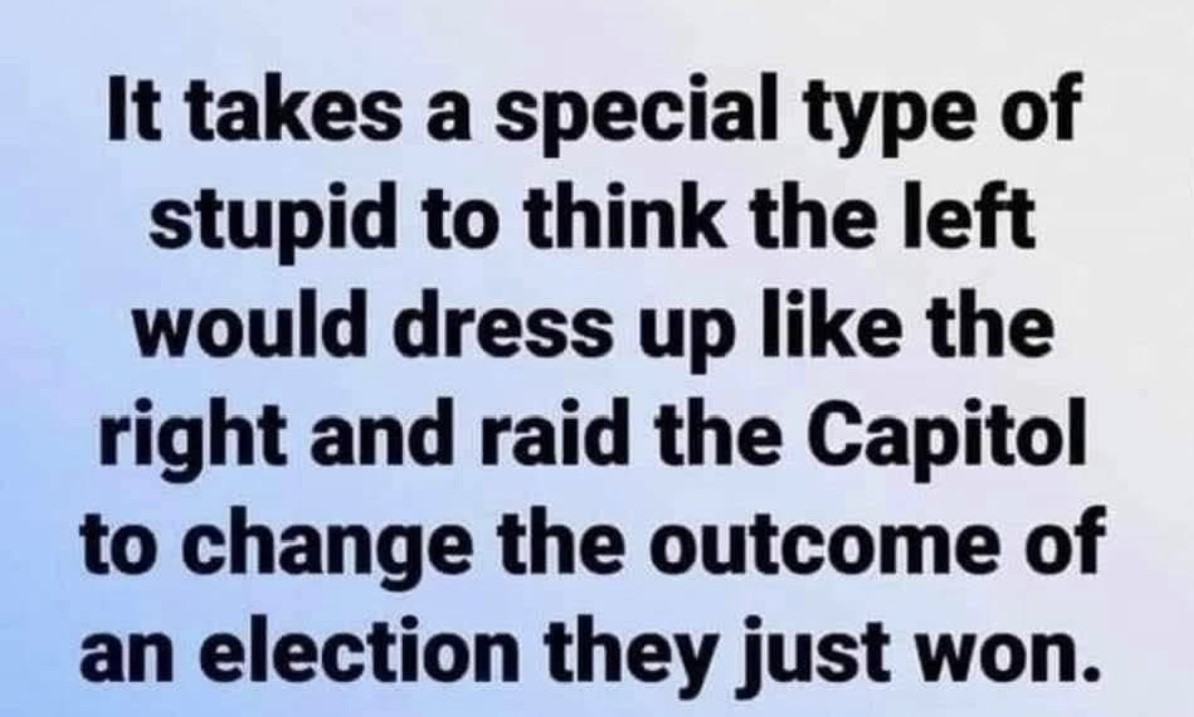 Some new information on The Queen. Was there a real Queen on which Titania was based, or was she, like Jesus, a myth without a model? Listen to Andrew Doyle below:

Tweets from Matthew. Watch the video on this one:

I can confirm this.

I spoke with a GOP member moments ago, asking if it is true that there are House Republicans who favor impeachment but fear for their lives/physical safety if they follow through with that vote.

This is what’s known as a “groaner”:

How is this possible? It's 500 years Before Cheeses. https://t.co/5uGvgHcoGA

Why do these bees have such long legs? The answer is in the second tweet (translated): “These legs allow the collection of oils from various tubular flowers, especially the genus Diascia and some orchids. These oils are a source of lipids for the larvae, and they also allow them to coat the nests against water and humidity.”

Troops quartered in the Capitol, the Civil War vs now. (Photos via @DaniellaMicaela and @ReedReports) pic.twitter.com/DCnR3E9fh2

It’s a spoiled Bengal! (And some bad grammar.)

I forgot the best bit of my walk today: this cat who's owners are fed up pic.twitter.com/xQqwNnFNAz

. . . and a lovely and colorful pitcher plant. It needs to drain itself a bit.

I can’t vouch for this, but Hemingway, like many writers and artists, was an ailurophile:

I learn that Ernest Hemingway described cats as “purr factories” and “love sponges” and am now imagining him posting lolcat memes on Facebook.