The book below is scheduled to be published in about two weeks, which means it’s not even out yet—unless they released it beforehand. It’s by Andy Ngo, a conservative journalist who’s described by Wikipedia as “editor-at-large of The Post Millennial, a Canadian conservative news website”.  We’ve encountered him before in several posts on this site, many of them covering Antifa in a negative light (Ngo is from Portland: Antifa Central); but I haven’t followed his reporting or writing in a long while, and didn’t know that he wrote a book on Antifa. It’s due out February 2.

But although the book hasn’t yet been released, it is in fact #1 among all Amazon books (Obama’s memoir is number 5), so It’s already a bestseller and will haul in a lot of dosh for Ngo. But its Amazon site (click on cover below) is curiously devoid of descriptions, and has no endorsements. That’s highly unusual for a #1-ranked book. I haven’t read it, but I suppose its popularity is due to the public’s increased interest in Antifa, alleged—falsely—to have participated in last week’s storming of the Capitol. 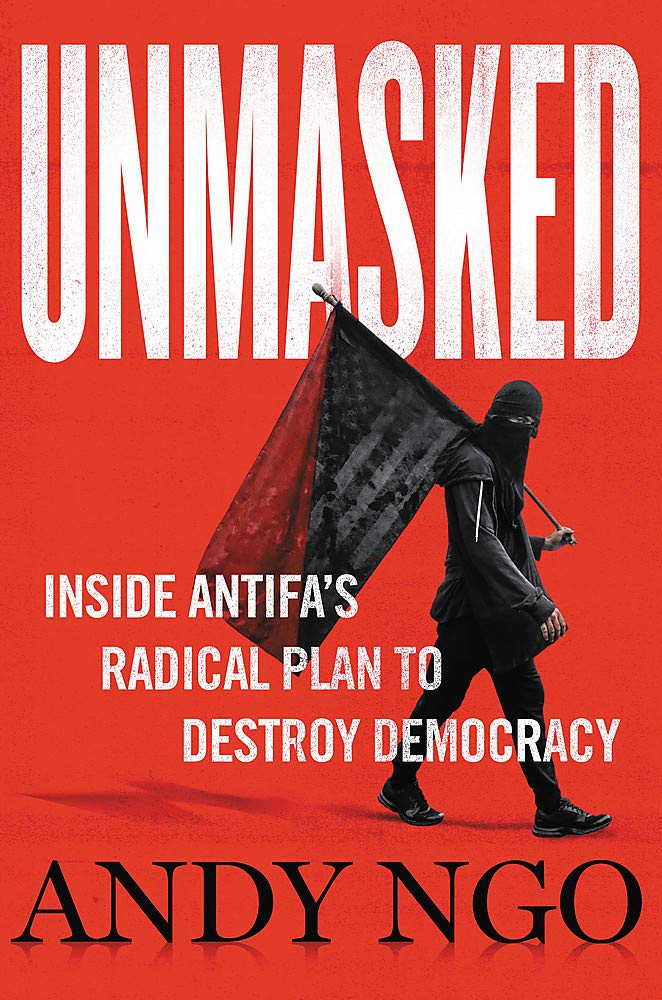 Portland is of course the wokest town in America, and is also home to Powell’s Books, one of America’s best bookstores, which also has a reputation for wokeness. I spent a lot of time in Powell’s on my two visit to Portland, and actually bought some books there despite my own bookshelves being jammed full.  It’s an excellent store. Portland would of course carry Ngo’s bestseller, but it poses a dilemma for them. The town is woke, the bookstore is woke, yet the book is anti-woke and anti-Antifa. What to do?

The good citizens of Portland (and I use that adjective ironically) decided to picket the bookstore—not because it actually had the physical book in its store, but because it was carrying it online. There were protests in front of the chain’s flagship store on Sunday and Monday, and eventually they closed the store.  Here are two photos from OregonLive: though it’s not much of a demonstration. 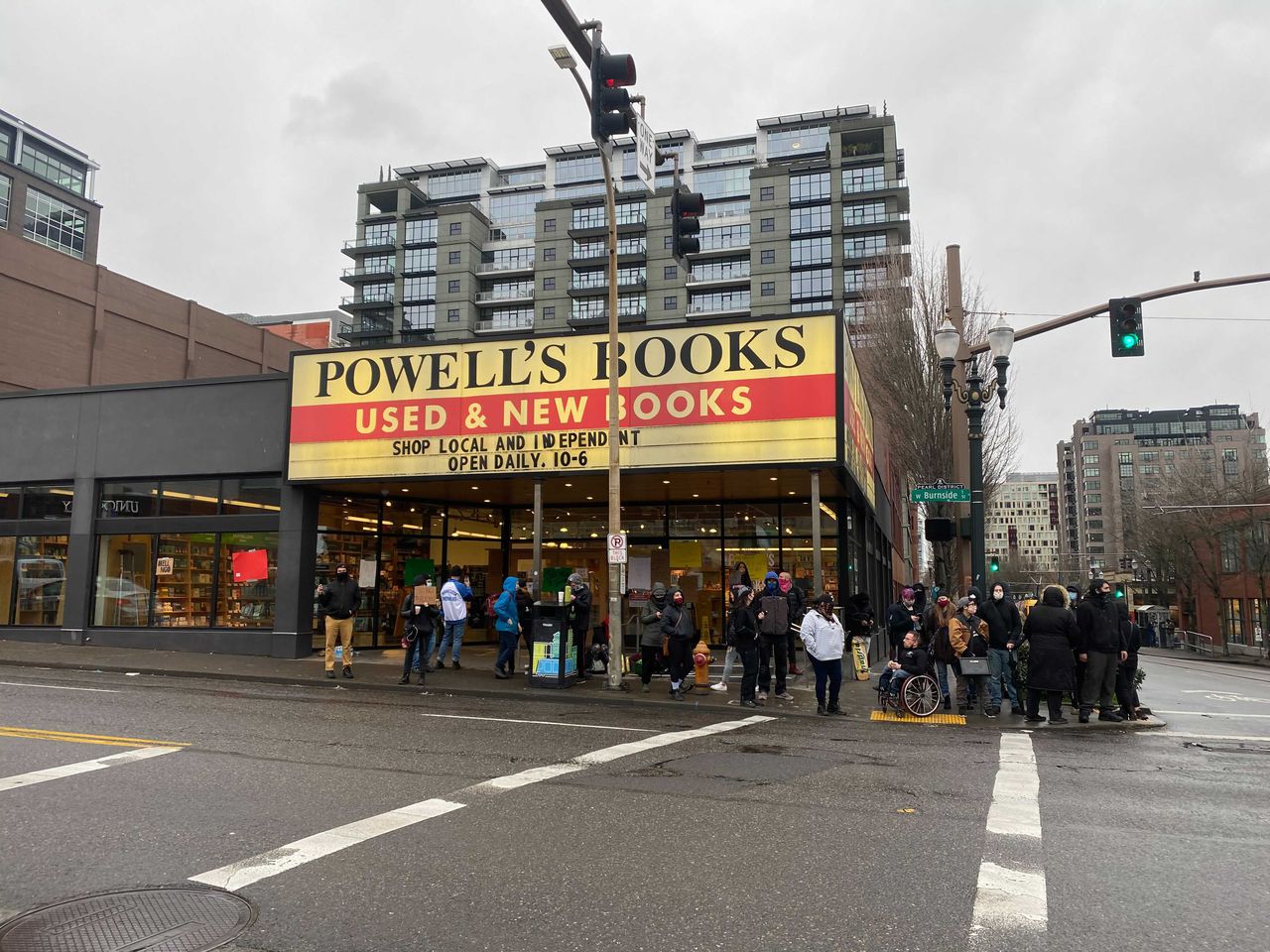 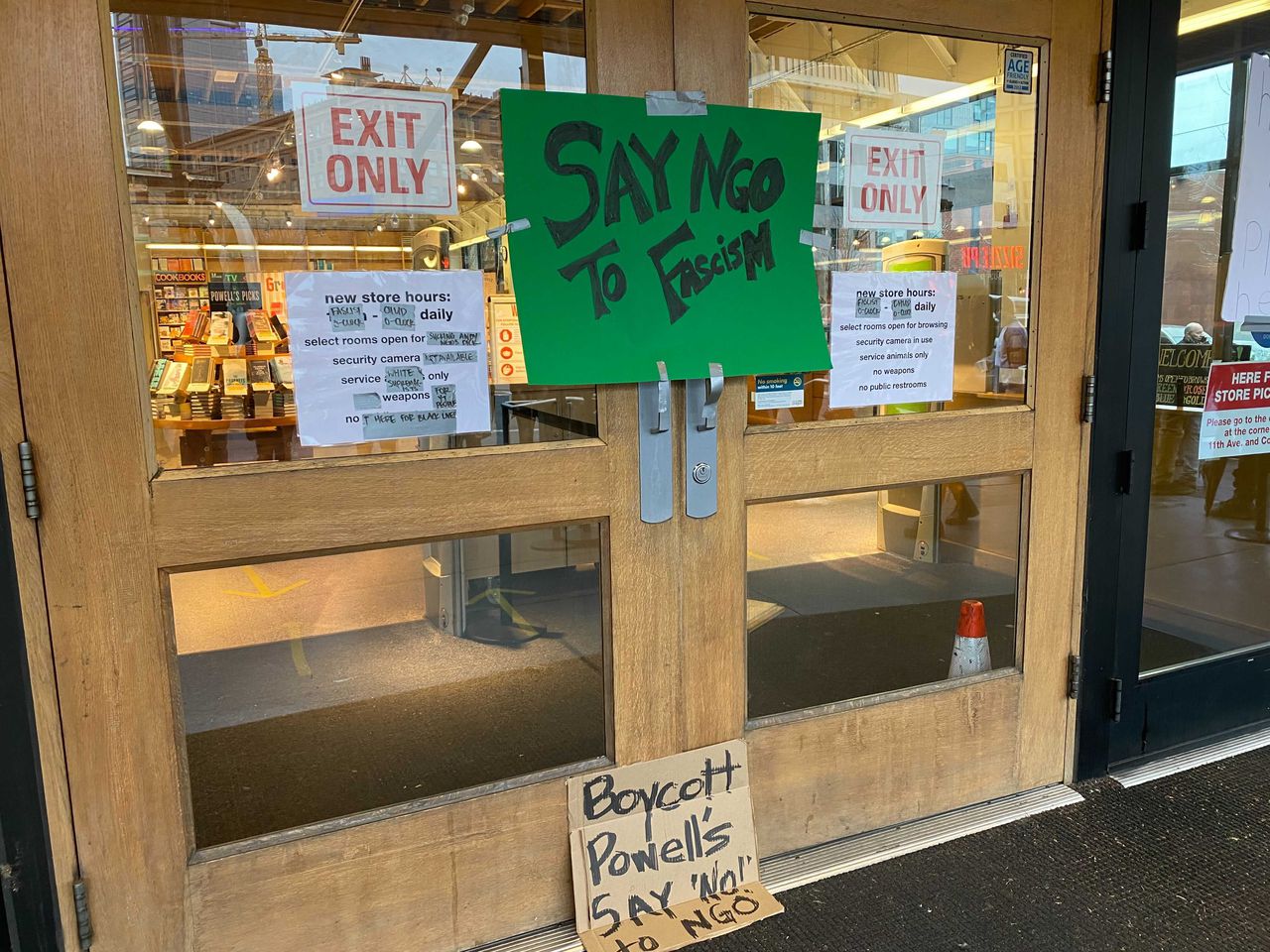 I don’t think Powell’s closed its store to send a message to the protestors so much as to protect its property from Antifa’s well-known propensity to do damage. But they did issue a statement about why they are carrying the book—a statement that asserts Powell’s commitment to free speech but, at the same time, emphasizing that the book is basically against the store’s values and causes “pain” to the community. In other words, Powell’s sent a mixed message, trying to satisfy everyone.

Further, the store has emphasized that it won’t be carrying the physical book in its store: you can get it only by ordering online. That’s part of the mixed message as well. You can see Powell’s high-sounding statement by clicking on the screenshot below.

Now in fact this would be an excellent statement if it didn’t go out of its way to denigrate the book. Here’s a statement from the store’s owner, and there’s more on the site. The emphasis is mine.

At Powell’s, a lot of our inventory is hand-selected, and hand-promoted. And a lot of our inventory is not. Unmasked by Andy Ngo came to us via one of our long-term and respected publishers, Hachette Book Group. We list the majority of their catalogue on Powells.com automatically, as do many other independent and larger retailers. We have a similar arrangement with other publishers.

Since Sunday, Powell’s has received hundreds of emails, calls, and social media comments calling for us to remove Unmasked from Powells.com. Demonstrations outside our Burnside store have forced us to close to ensure the safety of employees, protestors, and neighbors. If we need to remain closed, we will not hesitate to do so.

As many of you may be following these events, I want to offer additional context about our decision to allow this book to remain online.

Since the first published texts there have been calls to disown different printed work, and at Powell’s we have a long history of experiencing these calls, and the threats they bring with them, firsthand. Until recently the threats were from those who objected that we carried books written by authors we respected or subjects we supported. The threats were real but we could feel virtuous — we were bringing the written word to the light of day. We could feel proud of our choices, even when the choices created conflict.

Our current fight does not feel virtuous.  It feels ugly and sickening to give any air to writing that could cause such deep pain to members of our community. But we have always sold books that many of us would reject.  We have fought for decades, at Powell’s, for the right of a book to stand on its own. Doing so is one of our core values as booksellers.

In our history we have sold many copies of books we find objectionable. We do that in spite of all the reasons not to, because we believe that making the published word available is an important and crucial step in shedding light on the dark corners of the public discourse. It is actually a leap of faith into the vortex of the power of the written word and our fellow citizens to make sense of it.

That leap of faith is inextricably woven into our existence as Powell’s: faith in our customers is what first propelled us from a small corner store into who we are today.  We recognize that not every reader has good intentions, or will arrive at a writer’s intended destination, but we do believe that faith must extend to our community of readers. That offering the printed word in all its beauty and gore, must ultimately move us forward. As my father says, if your principles are only your principles sometimes, they’re not principles at all.

Read more about our commitment to free speech below.

Get that bit about the book causing “deep pain to members of our community”!  If the book isn’t out yet, and people haven’t read it, then where does the “deep pain” even come from? Presumably from Ngo’s reputation alone. It’s typical of of the censorious Left to demand the banning—for that’s what they want here—of books they haven’t read. In fact, they don’t care what’s in the book; they’re trying to prevent people from reading anything by Ngo. And that is cancel culture.

Now there’s a FAQ section of Powell’s response as well, which has virtuous statements like the following:

Booksellers are not censors. We have the privilege to curate, promote, and act as guides to the books and ideas we value, but it is antithetical to our core mission of free speech to impose limits on what our customers read. At the end of the day, making space for books and readers with whom we disagree is the nonviolent antithesis to the dominant impulse to shout down (or worse) anyone who doesn’t support your worldview, something we see daily on social media and, more terrifyingly, in America’s seats of power. Given the choice between holding our noses over a book and bowing to pressure to begin banning them, we will always choose the former.

As an independent bookstore, Powell’s believes that it is our responsibility to respect your choice of reading material. We are dedicated to providing a wide array of books, authors, viewpoints, and voices, and our selection is one of the things that sets Powell’s apart from our peers in bookselling. We provide these options out of deference to the First Amendment, but just as importantly, because we believe that exposure to a multiplicity of writing — in fiction and nonfiction alike — facilitates critical thinking and spurs conversation and growth.

That is all good stuff. But why did they have to ruin it by saying stuff like this?:

Why wouldn’t you make an exception to your policy for a book as inflammatory as Unmasked?

Unmasked was written by a provocateur who has made a career of inciting violence over inflammatory and inaccurate ideas that divide people into factions. It is natural that his supporters and detractors have passionate, emotional responses to our carrying his book online.

The next question they answer is “Why would you carry books you find deplorable?”, implying that Powell’s does indeed find Ngo’s book deplorable. You can read the answer for yourself.

The most arrant hypocrisy is the failure of the store to carry the physical book so that people can go into the store, look at it, and decide whether to buy it. Now you’re saying, “Well, the Antifa folks would just damage or destroy any physical books on the shelves.” That may be true—and of course shows that Ngo has a point, for exercising censorship is eroding democracy—but Powell’s could always keep the book behind the counter.  Here’s Powell’s unconvincing explanation for why it’s selling the book only online.

Why would you sell the book online but not in stores?

Even a store as large as the City of Books can’t carry every book on the market. To expand our offerings for our customers, Powell’s and many other retailers make their distributors’ and publishing partners’ catalogs available for purchase online. This is how a book like Unmasked, which our buyers did not purchase for the stores, finds its way onto Powells.com.

Yeah, right. They can’t carry the #1 book on Amazon in the store? Who on earth believes that explanation? And of course they could order more copies to sell in the stores. No, they aren’t carrying the book either because they’re afraid of Antifa or because they are exercising some kind of restricted access—censorship. Either alternative bespeaks cowardice and undermines the eloquent defense of free speech given elsewhere in Powell’s statement.

48 thoughts on “The conundrum of Powell’s Books: affirms free speech but refuses to place anti-Antifa book on its shelves”