Like all good centrist journalists who have been attacked or deplatformed for criticizing the Left, Bari Weiss has found a home for her writing on Substack. Her column is called “Common Sense” (at least that’s what’s written at the top), and you can read her first piece for free by clicking on the screenshot below. 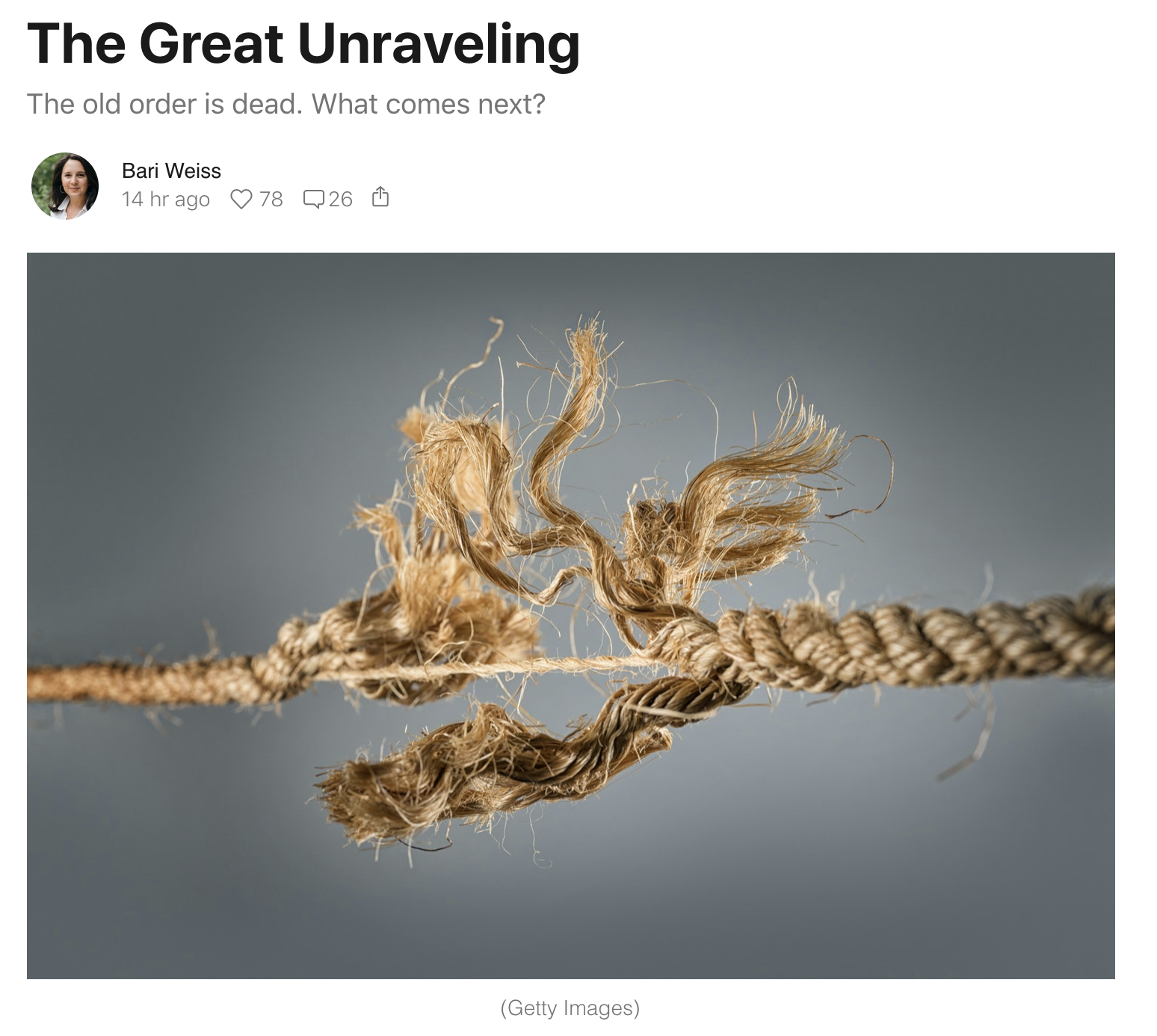 It’s curiously discursive for Weiss, but I don’t think she’s yet found her feet, though there are flashes of her old critical acumen in the article. In essence, it’s a Kumbaya Column, calling for centrism, universal love and kindness, and damning divisiveness and hatred. That’s not so bad, but it gets a bit cloying when Weiss talks about the tears streaming from her eyes when Robby George read her some prose from Heinrich Heine predicting, with frightening accuracy, the fire that would engulf Germany a hundred years after he wrote.

Here’s the side she puts herself on, and the position she has defended and will continue to defend on her site:

. . . . you have to be sort of strange to stand apart and refuse to join Team Red or Team Blue. These strange ones are the ones who think that political violence is wrong, that mob justice is never just and the presumption of innocence is always right. These are the ones who are skeptical of state and corporate power, even when it is clamping down on people they despise. The ones who still hold fast to the old ideas enshrined in our constitution.

How about Team Light Blue?

But I do appreciate Weiss’s center-Lefitsm as someone who, like Weiss, criticizes both Right and Left but has found a more comfortable niche criticizing the excesses of the Left, hoping to keep the Left honest.

But did it have to wind up with her admiration of Glenn Greenwald?

I am lucky to know more [of the good “sort of strange” people] than most. A good number of them are people who I once regarded as my ideological enemies. Or rather: they are people who I still regard as my opponents on any number of issues that are extremely important to me, but who see clearly that the fight of the moment, the fight that allows for us to have those disagreements in the first place, is the fight for liberalism.

Well, click on the link. Yep, it’s Greenwald, who sees the Democrats as the real authoritarians, aligned with social-media sites like Twitter who will do their bidding. Somehow I can’t bring myself to admire Glenn Greenwald; and I don’t think he fights for liberalism.

Weiss spends a fair amount of time in her column calling out social-media companies for their censoriousness. Two examples from Weiss, the first quoting Matt Taibbi:

“The machines ate us,” he wrote in Tablet last month. “We are all sick with the same disease, which is being pumped through our veins by the agents of a monopolistic oligarchy — whether they present themselves as the owners of large technology companies, or as the professional classes that are dependent on those companies for their declining wealth and status, or as identity politics campaigners, or security bureaucrats. The places where these vectors converge make up the new ideology, which is regulated by machines; the places outside this discourse are figured as threats, and made to disappear from screens and search results, using the same technologies that they use in China.”

. . . . and this, where her old flash of insight and skewering of mainstream media appears:

It’s not that Trump was permanently banned from Twitter. I’d be happy to never hear that voice or see those CAPS again. It’s that Twitter can ban whoever it wants whenever it wants for whatever reason. It’s that all the real town squares have been shuttered and that the only one left is pixelated and controlled by a few oligarchs in Silicon Valley.

We were promised the Internet would be better than democracy. But then it got privatized. Corporations own it. There is no online bill of rights. There is only the frenzy of the mob and fickle choices of a few billionaires.

Please spare me the impoverished argument about the free market and private companies not being bound by the constitution. Barring businesses from using online payment systems; removing companies from the App Store; banning people from social media — these are the equivalent of telling people they can’t open a bank account or start a business or drive down a street. (To my mind, David Sacks, who has spent his career building and funding tech companies, has been articulating this more powerfully than anyone out there. Follow him here.)

That almost every credentialed journalist and liberal public intellectual appears to be cheering on this development because it’s happening to the Bad People is grotesque. They will look like fools much faster than they realize.

She has a point in the last two sentences, you know. As she does when she calls out loons on both sides when referring to Taibbi’s “machines”. Here’s the old Weiss again:

The machines ate Ashli Babbitt, the 35-year-old Air Force veteran and Obama voter who slid into the gutter corners of the MAGA web and followed the siren song of Q to the capitol before bleeding out for the president in the people’s house.

The machines ate the former Jeopardy! champion and left-wing Twitter pundit Arthur Chu, who wrote that Babbit was “a pile of meat that moved and spoke and acted like a person was made to stop moving, and thus could no longer fool people into thinking it was one of them.” He said of her death: “You should feel less bad than you do about putting down a rabid animal.”

When a person with a blue check mark openly calls another human being, a fellow citizen, a “pile of meat” you should be very worried about what comes next.

Babbitt, of course, was a QAnon/Trump fanatic, but it’s not clear that she deserved to die. (Investigation is pending.) Chu is, and always has been, an odious person. But there are people on the Left who are just a milder version of him, and are applauded for it—the same people so quick to excuse Babbitt’s killing because she was a Trumpophile. It’s that kind of dehumanization we need to avoid, and it’s Weiss’s forte to take on ideas rather than people. After quoting with approval some lachrymose (though useful) advice from her friend David Samuels, including the Beatles’ “all you need is love”, she also quotes this:

“. . . And please, whatever you do, don’t embrace anyone’s sweeping program for remedying historical injustice, because history’s victims are already dead—and soon, there will be plenty more of them. I can hear the sound of the engines revving up, even from here.”

More of that, please, and less of John Lennon. I’ll almost certainly sign up to read Weiss’s stuff (like Andrew Sullivan, it’s $50 per year), but I’ll wait a couple of weeks to see if Weiss has resumed her old ways and style. Note that she does allow comments, though I don’t know if she’ll read them.

In the meantime, she adds this, and note that the event is TOMORROW:

On Thursday (10 a.m. EST) I’ll be doing an event with Jonathan Haidt, Katie Herzog and Suzanne Moore on the state of the press. Sign up here. [JAC: Tickets are free.]

29 thoughts on “Bari Weiss is back”