It looks pretty certain now that the House of Representatives will vote today to impeach Donald Trump for “high crimes and misdemeanors”, namely fomenting insurrection. You can watch the impeachment proceedings live at the site below, which are underway:

The charges are laid out in the following five-page document (click on screenshot below). The heart of the charges is this: 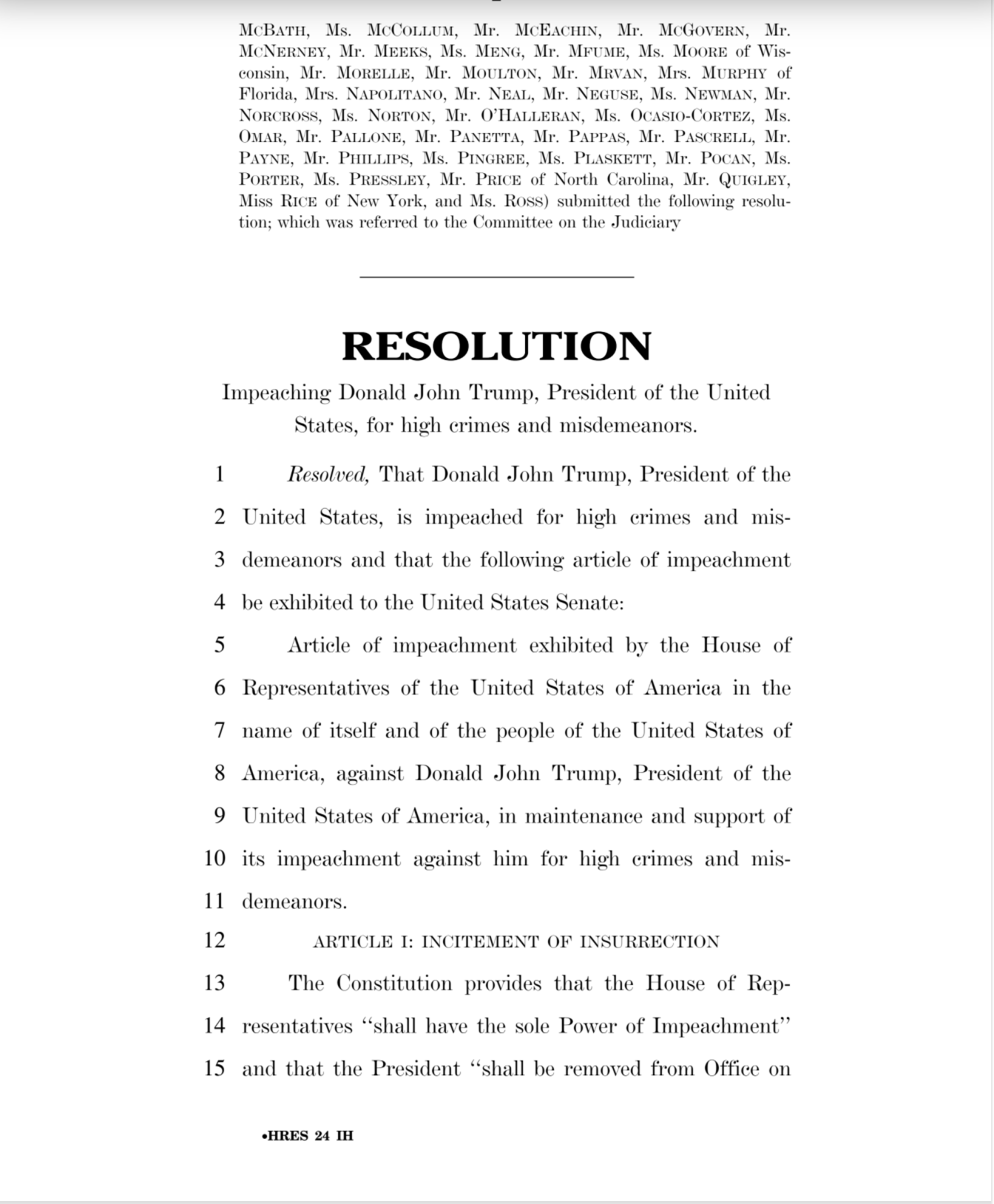 The House will certainly vote for impeachment, and at least five Republicans will join what will certainly be nearly all House Democrats, ensuring a majority vote—all that’s needed to send charges to the Senate.

As VP Pence has rejected the House’s demand that he use the 25th Amendment to expel Trump from office, impeachment would be the only way to get him out before Biden’s inauguration. A Senate hearing could in principle be held and dump him before January 20th, though that seems unlikely since there would be just one day to have that hearing. A Senate impeachment trial could of course proceed after Trump’s out of office.

There’s also the possibility of Congress censuring Trump in a resolution, but that isn’t in the offing yet.

Now four House Democrats didn’t endorse the impeachment resolution (one voted “present” and another is likely to become a Republican), but the other two oppose impeachment, at least one because it’s “divisive.”

The question at issue is not whether the House should vote to impeach Trump, as that’s a fait accompli. The question is whether the Senate should try him for insurrection. I think that they are required to have a trial if sent the bill of charges approved by the House, but I’m just laying out the pros and cons.

Here are the arguments I see both in favor of and against trying Trump in the Senate:

A.) It is a punishment of the man for all the bad deeds he did, culminating in his reprehensible and unconstitutional behavior last week. He would be the only President to have been impeached twice, and it’s a black mark on his record.

B.) He can be prevented from running for future office even if he’s not convicted. As Reuters notes:

Impeachment could be used to remove Trump from office and to disqualify him from holding political office in the future.

Two historical precedents, both involving federal judges, make clear that the Senate could also vote to disqualify the president from holding office in the future, with only a simple majority needed.

Paul Campos, a professor of constitutional law at the University of Colorado, said that even if the Senate does not convict the president, senators could hold a second, separate vote to prevent him from future office.

That would mean Democrats, who will take control of the Senate later in January, could bar Trump from running for president in 2024 even without the support of Republican senators.

C.) As Mitch McConnell thinks, kicking Trump out of office (or convicting him after he’s gone) would rid the Republican Party of Trump, whose actions are fracturing the party.

A.)  He will not be convicted, as that requires 17 Republicans to join with all the Democrats in the Senate to get the necessary 2/3 majority. Convicting him is, at this time, a futile hope.

B.)  It will be a symbolic vote since he’d be out of office even if he were convicted.

C.) It smacks of retribution, of Democrats getting back at him, and not just for his reprehensible actions last week. This occurs at a time when Biden is calling for “reaching across the aisle.”

D.) It makes Trump even more of a martyr to those of his minions who see him as persecuted. It’s thus divisive.

E.) It takes up time that the Senate needs to enact new legislation under Biden.

The most powerful argument for trying him, at least in terms of doing something concrete, is B above: he might be barred from running for office again, and that requires a simple majority vote which would surely occur in the Senate. The symbolic shaming will do little, I think, to stop his reprehensible behavior, which is hard-wired in his neurons and not subject to change. The fact that an impeachment vote will surely fail in the Senate does, however, tell the world that we will not tolerate a fascist, and at a time when the world’s opinion of America has fallen quite low.

Though there are arguments on both sides, I tend to approve of both the House impeaching Trump and the Senate trying him, even though they won’t secure a conviction. The symbolic act is a powerful one, which, though it may be divisive, will only divide those who support America’s democratic values from those who support fascism. Congress needs to make a statement, and impeachment, even without conviction, is a statement.

And, of course, if the Senate can secure that majority vote, it may be able to bar Trump from holding any federal office, which is a good thing. HOWEVER, even that might not work. As Reuters adds:

Trump could, however, try to challenge such a determination [the “can’t run for office” vote] in court, Campos said. The Supreme Court in 1992 said it would not second-guess the Senate’s decisions about how to handle impeachment proceedings.

“The Senate has great latitude in deciding how it wants to conduct a trial,” Campos said.

Other legal experts, however, said the Senate could only prevent Trump from holding office if it first votes to convict him in the impeachment trial.

So even a majority vote might not be enough to keep Trump from running again.

In the end, though, we can expect Trump, even if he doesn’t hold office, to remain a major figure in the Republican party, a “senior statesman”—horrible as that sounds—who will continue to make pronouncements and foment hatred. There’s nothing that anybody can do about that now.

But we can be heartened by realizing that Trump will now likely face state charges for tax evasion and other issues, and he cannot pardon himself for those. For the rest of his life he’ll be embroiled in legal and political fighting. Maybe he’d like that, as it feeds his narcissism, but I sure wouldn’t want to spend my dotage fighting the law—and perhaps sitting in jail.

Weigh in below, of course.

160 thoughts on “Should Trump be tried by the Senate for insurrection?”