Like many disaffected journalists, Glenn Greenwald has found a home on the Substack platform; this after he resigned from The Intercept. Although, like other writers on the site, he charges for access to his essays, for a limited time you can read for free. The piece below was recommended by a reader, and, having read it, I can see where Greenwald is coming from. But he sounds a bit overheated, as well as a bit of a sourpuss, and I don’t think I’ll subscribe. (I may cancel my subscription to Andrew Sullivan’s site, too, if he doesn’t start writing more interesting pieces.)

At any rate, you can click on the screenshot below to read Greenwald’s piece. It will at least make you think. 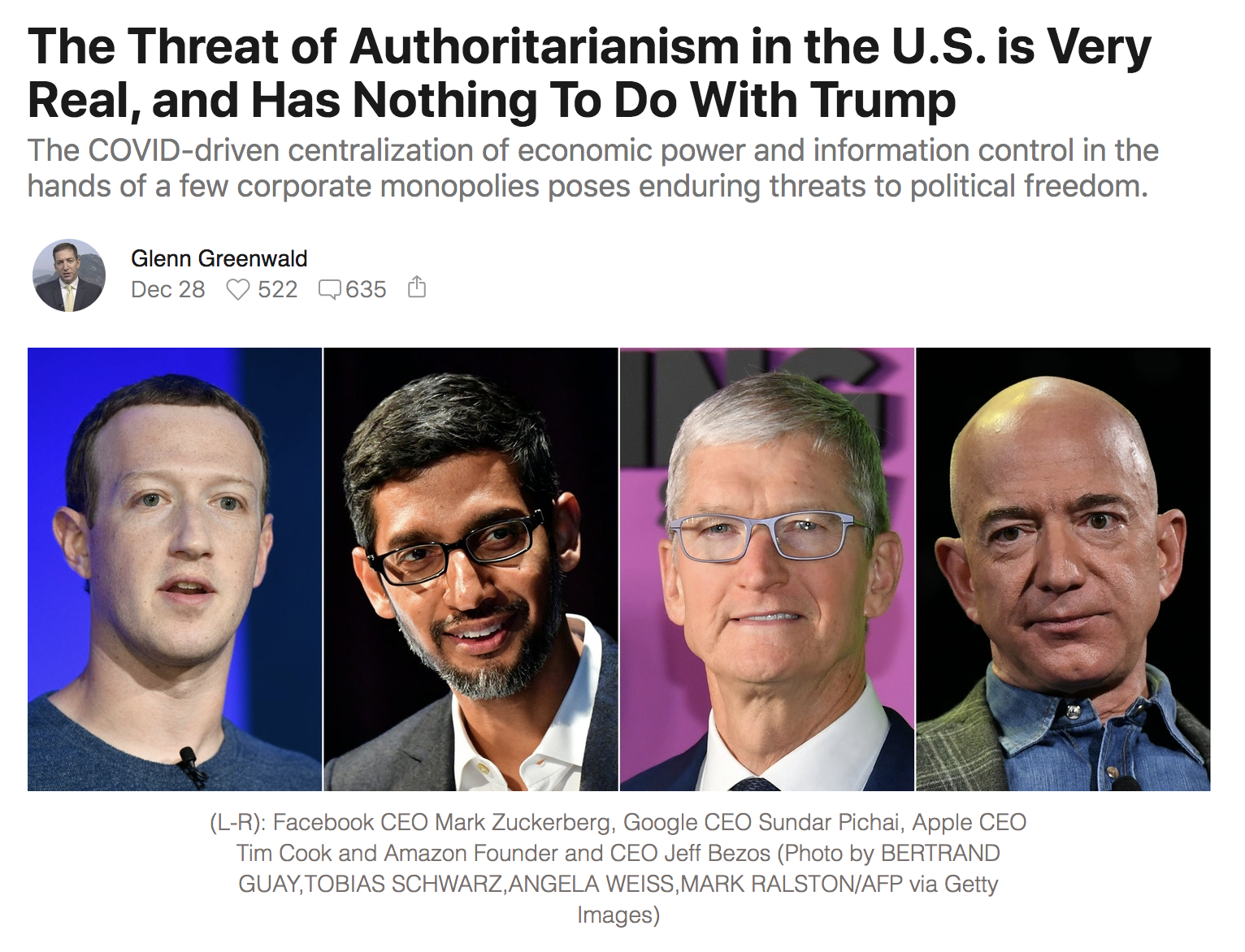 Greenwald makes several points, which I’ll list in order and show an excerpt for each one (indented).

1.) Donald Trump was never an authoritarian. That is, he never wielded the power that he could have.

In 2020 alone, Trump had two perfectly crafted opportunities to seize authoritarian power — a global health pandemic and sprawling protests and sustained riots throughout American cities — and yet did virtually nothing to exploit those opportunities. Actual would-be despots such as Hungary’s Viktor Orbán quickly seized on the virus to declare martial law, while even prior U.S. presidents, to say nothing of foreign tyrants, have used the pretext of much less civil unrest than what we saw this summer to deploy the military in the streets to pacify their own citizenry.

. . .But early in the pandemic, Trump was criticized, especially by Democrats, for failing to assert the draconian powers he had, such as commandeering the means of industrial production under the Defense Production Act of 1950 . . .  Rejecting demands to exploit a public health pandemic to assert extraordinary powers is not exactly what one expects from a striving dictator.

A similar dynamic prevailed during the sustained protests and riots that erupted after the killing of George Floyd. . . while Trump threatened to deploy [military power] if governors failed to pacify the riots, Trump failed to order anything more than a few isolated, symbolic gestures such as having troops use tear gas to clear out protesters from Lafayette Park for his now-notorious walk to a church, provoking harsh criticism from the right, including Fox News, for failing to use more aggressive force to restore order.

2.) The authoritarian myth was made up by the media to attract clicks, dosh, and attention.

The hysterical Trump-as-despot script was all melodrama, a ploy for profits and ratings, and, most of all, a potent instrument to distract from the neoliberal ideology that gave rise to Trump in the first place by causing so much wreckage. Positing Trump as a grand aberration from U.S. politics and as the prime author of America’s woes — rather than what he was: a perfectly predictable extension of U.S politics and a symptom of preexisting pathologies — enabled those who have so much blood and economic destruction on their hands not only to evade responsibility for what they did, but to rehabilitate themselves as the guardians of freedom and prosperity and, ultimately, catapult themselves back into power. As of January 20, that is exactly where they will reside.

Note that he segues to his next point:

3.) The Democrats, among them Biden and his administration (he calls them “neoliberals”), as well as previous presidents who waged war without the proper authorities (e.g., Obama), are the real authoritarians.

. . . as I wrote in a Washington Post op-ed in late 2016, the U.S. Government itself is authoritarian after decades of bipartisan expansion of executive powers justified by a posture of endless war. With rare exception, the lawless and power-abusing acts over the last four years were ones that inhere in the U.S. Government and long preceded Trump, not ones invented by him. To the extent Trump was an authoritarian, he was one in the way that all U.S. presidents have been since the War on Terror began and, more accurately, since the start of the Cold War and advent of the permanent national security state.

The single most revealing episode exposing this narrative fraud was when journalists and political careerists, including former Obama aides, erupted in outrage on social media upon seeing a photo of immigrant children in cages at the border — only to discover that the photo was not from a Trump concentration camp but an Obama-era detention facility (they were unaccompanied children, not ones separated from their families, but “kids in cages” are “kids in cages” from a moral perspective). And tellingly, the single most actually authoritarian Trump-era event is one that has been largely ignored by the U.S. media: namely, the decision to prosecute Julian Assange under espionage laws (but that, too, is an extension of the unprecedented war on journalism unleashed by the Obama DOJ).

4.) The Democrats are further culpable because they’re in league with the large monopolies, like Facebook and Amazon—companies that are really destroying America. (Greenwald goes on and on about this. )

What makes this most menacing of all is that the primary beneficiaries of these rapid changes are Silicon Valley giants, at least three of which — Facebook, Google, and Amazon — are now classic monopolies. That the wealth of their primary owners and executives — Mark Zuckerberg, Jeff Bezos, Sundar Pichai — has skyrocketed during the pandemic is well-covered, but far more significant is the unprecedented power these companies exert over the dissemination of information and conduct of political debates, to say nothing of the immense data they possess about our lives by virtue of online surveillance.

Stay-at-home orders, lockdowns and social isolation have meant that we rely on Silicon Valley companies to conduct basic life functions more than ever before. We order online from Amazon rather than shop; we conduct meetings online rather than meet in offices; we use Google constantly to navigate and communicate; we rely on social media more than ever to receive information about the world. And exactly as a weakened population’s dependence on them has increased to unprecedented levels, their wealth and power has reached all new heights, as has their willingness to control and censor information and debate.

That Facebook, Google and Twitter are exerting more and more control over our political expression is hardly contestable. What is most remarkable, and alarming, is that they are not so much grabbing these powers as having them foisted on them, by a public — composed primarily of corporate media outlets and U.S. establishment liberals — who believe that the primary problem of social media is not excessive censorship but insufficient censorship. As Sen. Ed Markey (D-MA) told Mark Zuckerberg when four Silicon Valley CEOs appeared before the Senate in October: “The issue is not that the companies before us today is that they’re taking too many posts down. The issue is that they’re leaving too many dangerous posts up.”

Note the implicit call for more censorship. And, finally, there’s this:

The dominant strain of U.S. neoliberalism — the ruling coalition that has now consolidated power again — is authoritarianism. They view those who oppose them and reject their pieties not as adversaries to be engaged but as enemies, domestic terrorists, bigots, extremists and violence-inciters to be fired, censored, and silenced. And they have on their side — beyond the bulk of the corporate media, and the intelligence community, and Wall Street — an unprecedentedly powerful consortium of tech monopolies willing and able to exert greater control over a population that has rarely, if ever, been so divided, drained, deprived and anemic.

Although Greenwald, as far as I know, has been quite critical of Trump, he’s no fan of the Democrats or Biden, either. In this essay he comes off largely as a centrist Republican, wary of too much power inhering in government.  I suppose it’s worth thinking about the economic hegemony of these big media sites, and how they’ve increased income inequality in America, but I find myself strangely unable to resonate with Greenwald’s sky-is-falling narrative. For all I know, he may be right.

Perhaps it’s the other horrors of 2020 (and you can’t deny that even if Trump wasn’t an authoritarian, he had a severe personality disorder), but I somehow can’t get worked up about Facebook or Amazon. That may be my fault, but, after all, we can’t care about everything. For example, much of America is concerned right now with racial rather than economic inequality, and I expect they won’t get excited about this piece, either.

However, I’d be glad to hear what readers have to say. I am absolutely sure that many of you have followed Greenwald more closely than I.