I am very sad today. What Jewish lad could not love Sarah Silverman? She’s Jewish, has that swarthy attractiveness that bores into our hearts, is proud of being an atheist Jew, has a smart and sassy mouth, and is a good liberal. And she’s funny. And it’s not just secular Jews like me who are smitten: I believe that Dan Dennett also has a case of Silvermanitis—he follows her on Twitter, and has even spoken to her.

Yes, some of her humor is edgy, and sometimes too edgy, to the point of being cringeworthy. But by and large her humor is thoughtful and absorbing. PLUS she did a great acting job in the so-so movie I Smile Back, playing a depressive alcoholic/drug addict. Her depression is real, too, and also appeals to those of us who have Black Dog tendencies. (Jews tend to be on the “half empty” side: who wouldn’t when we’ve been fleeing pogroms and anti-Semitism for two millennia?)

And so I loved The Divine Sarah—until yesterday, when I saw her 3-minute Instagram video (click on screenshot below) where she expresses support of BDS—a support totally ignorant of what BDS really stands for. In fact, she makes so many errors and misguided assertions here that the only real truth in her words is when she says, “I am talking out of my ass.” 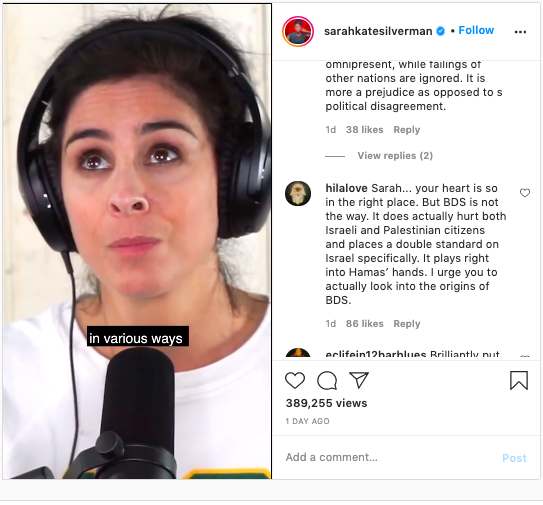 First of all, the BDS movement isn’t just criticizing the Israeli government for the “occupation”; BDS wants an end to Israel as the country it is now. They do this by calling for a “right of return” of Palestinians who left Israel during the first war (often at the behest of Arab states!) and also for the return of all their descendants as well. That would turn into Israel into a majority-Palestinian state, and you know what that means. A bloodbath, for one thing. No, BDS is not fooling around when its advocates cry, “From the river to the sea, Palestine will be free!”

Further, BDS doesn’t just want to boycott the government, it wants to boycott Israeli academics, who are seen as complicit with the government. People like me are not, for example, supposed to go to academic conferences in Israel. Screw that.

It goes even further: BDS calls for a boycott of Israeli artists, writers, singers, and so on—and I presume Israeli comedians like Silverman. That, again, is a boycott not of a government, but of Israelis themselves: Jews. You don’t have to think too hard to see the anti-Semitism inherent in BDS.

Silverman makes an oblique reference to Israel as practicing apartheid. That, too, is arrant nonsense. Arabs in Israel live with all the rights of citizens, including the right to be judges, sit in the Knesset, and so on. If there is truly an apartheid territory in that area, it’s Palestine, where Jews are not allowed to live and are vilified constantly by the government.  And the Palestinian government, either by the Palestinian Authority or Hamas, is brutal, repressive, and unempathic towards its people. Gays and apostates are guilty of capital crimes; women are oppressed. There is no freedom of speech. Does Sarah know that? Certainly the American Far Left should, but they ignore it.

Silverman’s claim that the boycotts against South Africa (in which I participated!) were effective is a dubious claim. Grania used to tell me, and she lived in South Africa then, that it was the moral suasion, not the boycott, that finally ended apartheid. I’m not a historian, so I will just drop that here and move on.

As for the West Bank, one can make a valid claim that, under international law, Israelis have a right to that territory, which was occupied by Jordan until 1967. At that time, when Israel reclaimed it after the war, Israel still was willing to give up the West Bank to Palestinians in return for peace. The Palestinians refused. Now, however, it would be suicide to turn the West Bank over to the Palestinians, who would simply use it and its height to fire rockets at vital parts of Israel that are very close. And don’t forget that Israel unilaterally withdrew from Gaza to placate world opinion, turning that area and its resources completely over to the Palestinians. That didn’t work, either: Hamas is using Gaza as a convenient platform to fire rockets into southern Israel and launch terror attacks.

At any rate, Silverman should know better than to spout this nonsense. She appears to know nothing about BDS or the history of Israel, and yet she makes videos like this. I could attribute her palaver to the possibility that she might be high, for she surely looks to be in a bit of other-consciousness, but I’ll take her words seriously. Sarah, if you want to discuss your claims, give me a call. 🙂