Snopes leans largely to the Left, so if it gives a mixed rating to the question below (half true/half false), you can be pretty sure that it would not stand up in a court of law, much less the Senate. I didn’t follow exactly what the Orange Man said before the horrific events of three days ago (five people are now dead, including a Capitol police officer who died after being bashed in the head with a fire extinguisher), but I’m pretty sure that Josh Hawley’s fist-pump to the demonstrators does not constitute incitement to imminent violence. Hawley could have been giving an “I’m with you” sign—odious enough, but not unambiguous enough to prove, much less buttress, the calls of people who want him tried for treason.

Trump may be impeached, and I support the House going forward with that, but what was his role, if any, in inciting people to storm the Capitol? Well, Snopes gives the question a “mixture” response (click on screenshot).

It turns out that Trump may have had this violence in mind, but he was very, very canny about what he said, and since we can’t show that he knowingly incited violence, that can’t be proven. Here’s what Snopes says: 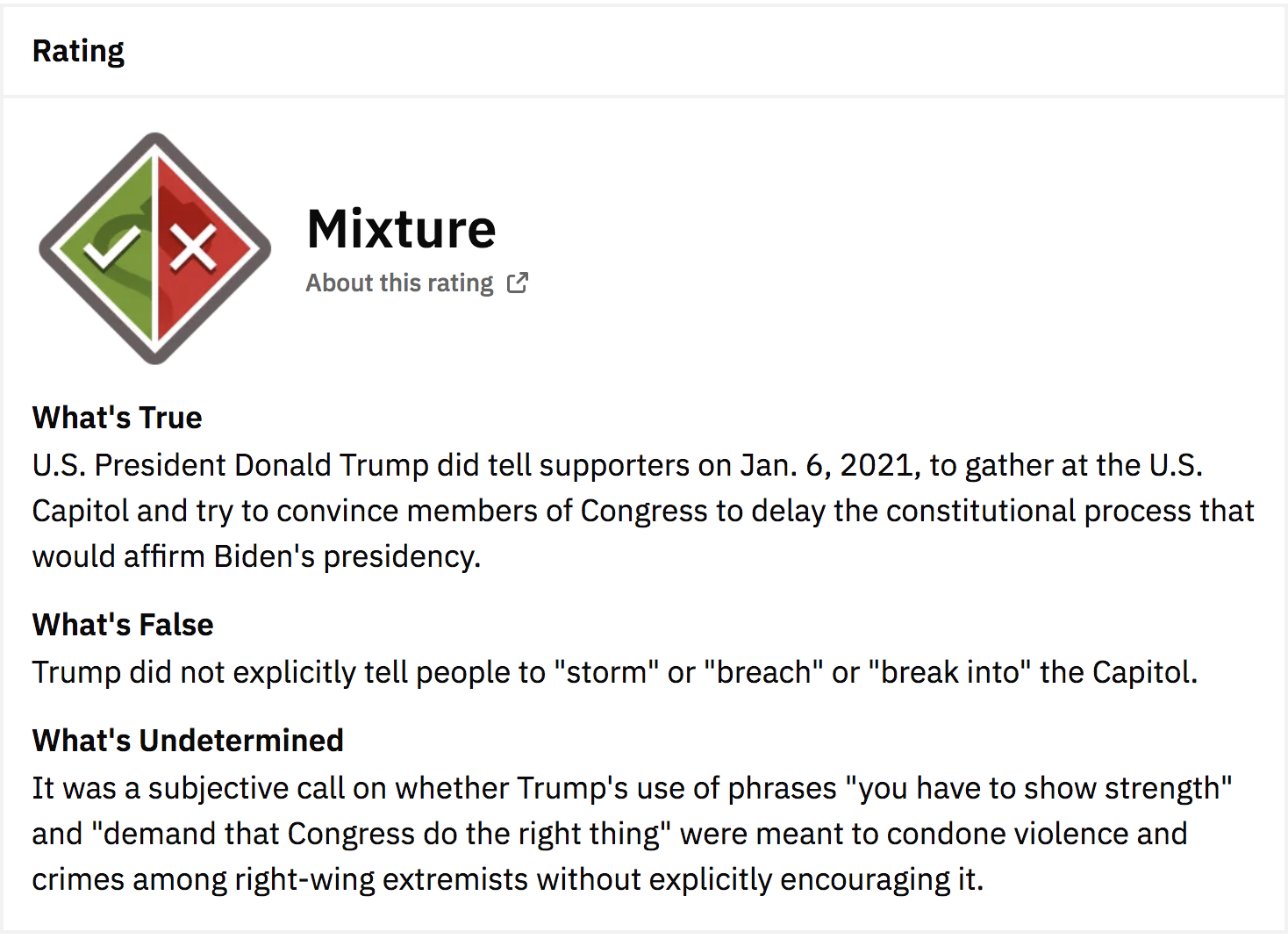 In short, the president called on supporters to “peacefully and patriotically” march or walk to the Capitol on Jan. 6, 2021, to urge members of the senate to defy the Electoral College vote in a constitutionally mandated procedure to affirm Biden’s win, without using the words “storm” or “breach” or “break into” the federal building.

Put another way, the president encouraged supporters to descend on the Capitol grounds and “cheer” on senators who would break laws governing U.S. elections, but he did not explicitly tell people to commit crimes themselves.

Furthermore, it was a subjective call on whether the phrases “you have to show strength” and “demand that Congress do the right thing” were actually messages condoning crimes and violence among extremists, without outright encouraging it. Such a rhetorical strategy is known to scholars of white nationalist and extremist groups, including the Proud Boys.

In sum, while Trump did not say the words “storm” or “break into” the White House, Trump indeed told supporters to gather at the U.S. Capitol and try to convince members of Congress to delay the constitutional process that would affirm Biden’s presidency. For those reasons, and the ones outlined above, we rate this claim a “Mixture.”

In other words, if Trump had that in mind (and who knows?), he was very clever. Demented, maybe, but perhaps clever. He may be impeached, but if this is the main charge, I predict that he won’t be convicted in an impeachment trial. Why, then, do I favor impeachment? Well, there’s the slight possibility that some Republicans may vote with the Democrats, for there were many reasons to remove Trump from office besides the charge of incitement, but mainly I think it will be another black mark on his record: the first President to be impeached twice.