Andrew Sullivan’s latest column (click on screenshot below) won’t surprise anyone who has seen him diagnose Trump as mentally ill over the last few months, a diagnosis only confirmed with this week’s insanity. But I haven’t seen Sullivan go after the Republican Party in such strong terms as the ones below. I guess you might still call him a conservative, but there’s no way he’ll tolerate the label “Republican”:

Fur hat Viking Man will carry that stigma with him the rest of his life: 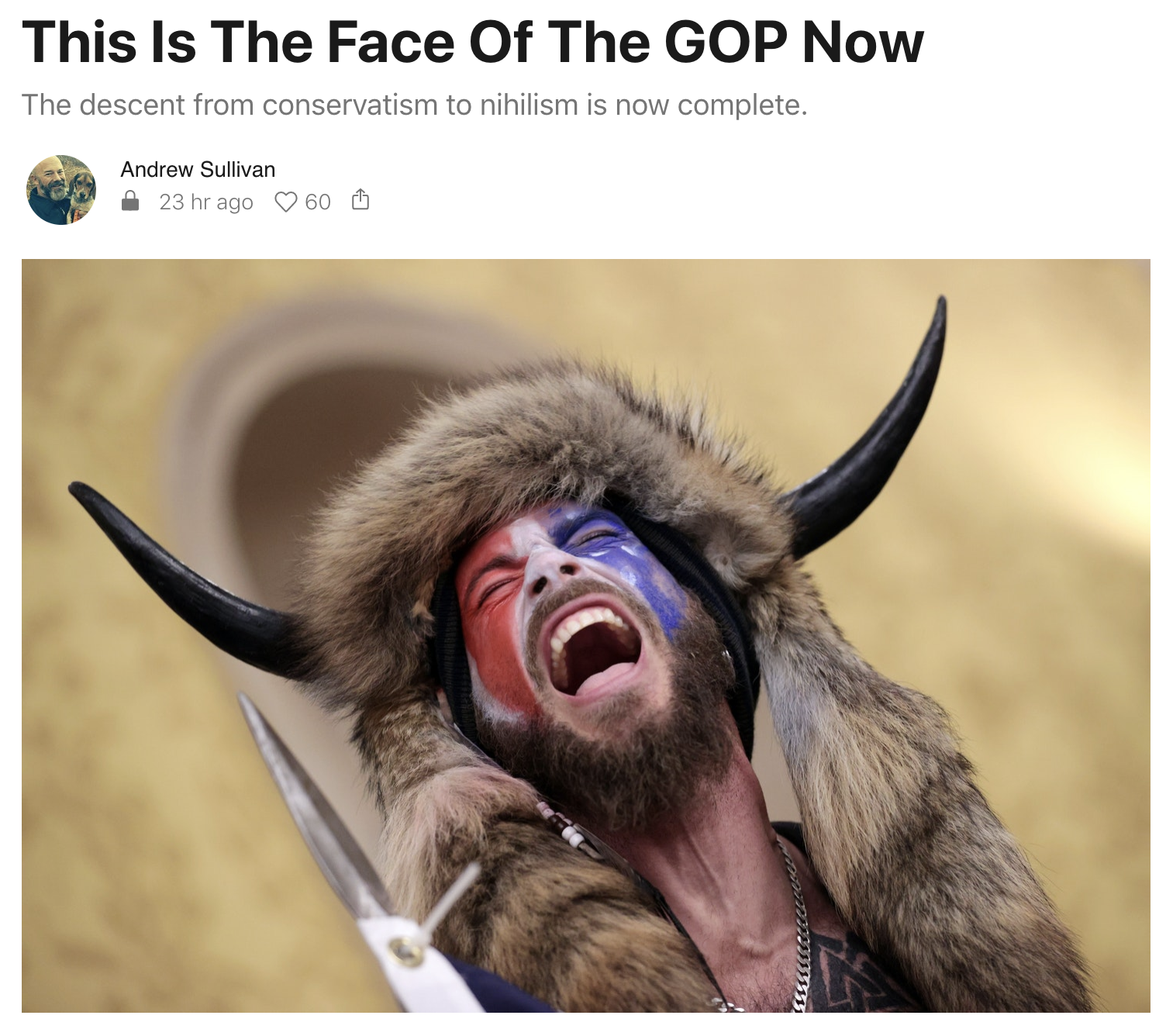 There is a temptation to believe that this is finally over. But for as long as this man exercises the powers of the presidency, it isn’t. He has used the power of the pardon these past few years to obstruct justice, to prevent vital testimony in a legitimate investigation, and to reward friends and relatives. In recent weeks, we’ve been told, he has also discussed the possibility of a proactive pardon for himself and his own family that will only cement his legacy of a presidency beyond the reach of any checks and balances. The next ten days, as he is cornered, are among the most dangerous. He could do anything. I favor a second impeachment, swiftly executed. The goal at this point is to get him out of there before he does even more damage, to keep him on the defensive, and to bar him from running for office ever again. This is where we are.

It pains me to say it, but this week was, in many ways, the essence of American “conservatism” in 2021. It has morphed from a politics to a theological movement to a personality cult. It is a threat to the very foundations of liberal democracy. It is nihilist, performative, incoherent and bristling with the certainty of fundamentalists and the corruption of grifters. It has destroyed this country’s fiscal standing, wrecked this country’s international reputation, trashed the norms and practices of liberal democracy, perverted the rule of law, accelerated climate change, and now physically vandalized the most sacred civil place in America.

And for what? Ratings? Soaring and destabilizing inequality? A national debt previously unthinkable in peacetime? Thousands and thousands of viral deaths that might have been prevented by the simple act of a president wearing a mask in public and urging others to do the same? The eradication of a shared concept of truth? The embrace of Kim Jong Un? The delegitimization of the entire press? The rehabilitation of Putin? The wet dreams of Netanyahu? Or the acceleration of Iran’s nuclear bomb? Pick one or all of them. The last two Republican presidents have ended their terms with the country in ruins. We cannot afford another one until the GOP is razed and rebuilt as a viable, democratic party.

“Remember this day!” Trump declared even after the disgrace had happened. And we will, we will. It exposed the GOP for what it is. These were not fringe loonies. Even after the sacking of the Capitol, a majority of House Republicans voted to endorse the insane conspiracy theories of the seditionists and not to certify a legitimate and fair election. In a snap YouGov poll, a plurality of Republicans backed a violent assault to reverse an election result. A party that does this is not fit to exist in a liberal democracy.

Unfortunately, Sullivan, whose gone farther than any self-styled conservative to call out Trump as deranged, has himself been excoriated for accusing the Left of driving people towards Trump, an accusation that in fact has some merit. Of course the Democrats are not responsible for Trump’s insanity and his foul deeds, but they may have swelled the ranks of his minions, (though probably not the ones who invaded the Capitol).

Here’s the paragraph that got Sullivan in trouble with the Left. But he’s been saying this for a long time, and I’ve expounded a somewhat tamer version. Perhaps it’s a sign of the suddenly unleashed nastiness among some on the Left that something like the two sentences I’ve put in bold would be controversial:

My first desperate hope with this administration was that it would plummet so far in popularity so quickly it would cause a revolt within the GOP. Trump’s demagogic genius, the left’s radicalization, and the pull of tribalism soon put an end to that delusional hope. My second was a thorough repudiation of the GOP as well as Trump this past political cycle in what I hoped would be a landslide Democratic victory. The rhetoric of the far left and the burning of American cities last summer scotched that one, as the Congressional tally shows. So my third is simply that we will soon begin to treat these past four years as the quintessential cautionary tale in the narrative of America. In the future, if a president refuses to be accountable to Congress in any way, or obstructs justice or tells massive lies, or refuses to concede an election, he or she will be instantly stigmatized as being a version of Trump.

Finally, Sullivan has a gold mine of quotes this week. Here are but a few. The first one makes me gag every time I hear it.

“We love you. You are very special,” – Trump, in a taped statement addressing the seditionists who attacked the Capitol.

“It turns out telling voters the election is rigged is not a good way to turn out your voters,” – Mitt Romney, on the Democratic triumph in Georgia.

“It is a sickening and heartbreaking sight. This is how election results are disputed in a banana republic — not our democratic republic,” – George W. Bush.

“Today, the United States Capitol — the world’s greatest symbol of self-government — was ransacked while the leader of the free world cowered behind his keyboard — tweeting against his Vice President for fulfilling the duties of his oath to the Constitution,” – Republican Senator Ben Sasse.

“Destroying property, which can be replaced, is not violence,” – Nikole Hannah-Jones, on the rioting and looting this past summer.

“Right now, Republican leaders have a choice made clear in the desecrated chambers of democracy. They can continue down this road and keep stoking the raging fires. Or they can choose reality and take the first steps toward extinguishing the flames. They can choose America,” – Barack Obama.

And I love this one:

“The other day, because this is America, the 82-year-old hands that used to pick somebody else’s cotton went to the polls and picked her youngest son to be a United States senator,” – Raphael Warnock, the first black senator from Georgia.

I’m still hopeful that Republicans can choose America, but I don’t really expect it. But look: we have a Democratic House, Senate, President, and Vice-President. We have several effective vaccines against Covid-19. Things are a hell of a lot better than they were 9 months ago. Will there be any more monkey business from Trump before January 20?  A lot of people say “of course,” but I’ll stick my neck out and aver that he’s has been thoroughly chastened, and, demented as he is, will keep a low profile until he’s out of the White House.