Welcome to the first Tuesday of 2021: January 5: National Whipped Cream Day. If you go to the Foodimentary page that describes the day, there are five facts about whipped cream. Here’s the first:

1.) Mainly the heavy cream that make whipped cream out of is in reality a milk product.

What? Who’s writing these things?

For those who think that food is medicine, it’s also National Keto Day, and for animal lovers it’s National Bird Day.  Finally, it’s the Twelfth Day of Christmas and the Twelfth Night.

This is heartening, at least in principle. In a new op-ed at the NYT, four former Senators, two Republican (Jack Danforth and John Hagel) and two Democrats (Chris Dodd and Paul Kirk) endorse a stronger bipartisanship in the Senate. Of course these are ex-Senators,  pining for the Floor, and in light of the now 12 Republican Senators who want to re-examine the election results, I’m not hopeful. I’d rather have both Democrats win in Georgia.

On the news last evening, it was revealed that the impetus behind the letter to the Washington Post from all living (10) Secretaries of Defense, a letter calling for recognizing that the Presidential election was over, was—get this—Dick Cheney! That surprised me.

On that same topic, can Trump be charged with a crime for phoning the Georgia Secretary of State and asking him to change the vote?  Editorial-page editor Ruth Marcus of The Washington Post says, “perhaps,” but I say, “no”, because all the relevant statutes assume that Trump KNEW that he was trying to commit fraud—that the election results were correct and he was trying to overturn them. It would be a hard row to hoe for a prosecutor to prove what Trump “knew”. Although there are Georgia state statues involved here, for which Trump cannot pardon himself, I don’t think he’s going to get in trouble for his horrifying call. He will be in trouble for tax evasion, a New York state crime.

There’s at least one silver lining in Brexit: the UK just abolished its tax on menstrual products like tampons. Before Brexit, there was an Eu-mandated tax on these products of at least 5%, as they were considered—wait for it—”nonessential luxury items.” Luxury? If men had periods, this issue wouldn’t have existed.

Yesterday’s poll on how many of the two Senate seats the Democrats will win in Georgia today gave these results: 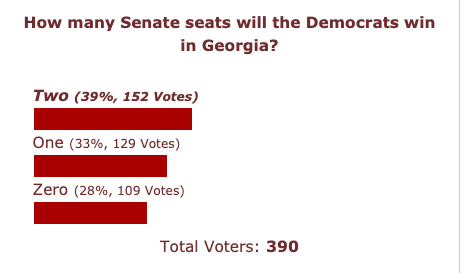 Like the pundits, we have not much of a consensus here. This week will tell the tale.

Stuff that happened on January 5 include:

Here’s a photo of the opera I took in February of last year, on my last trip before the pandemic hit.  Believe me, Paris is one of the first places I’ll return to when travel is safe. 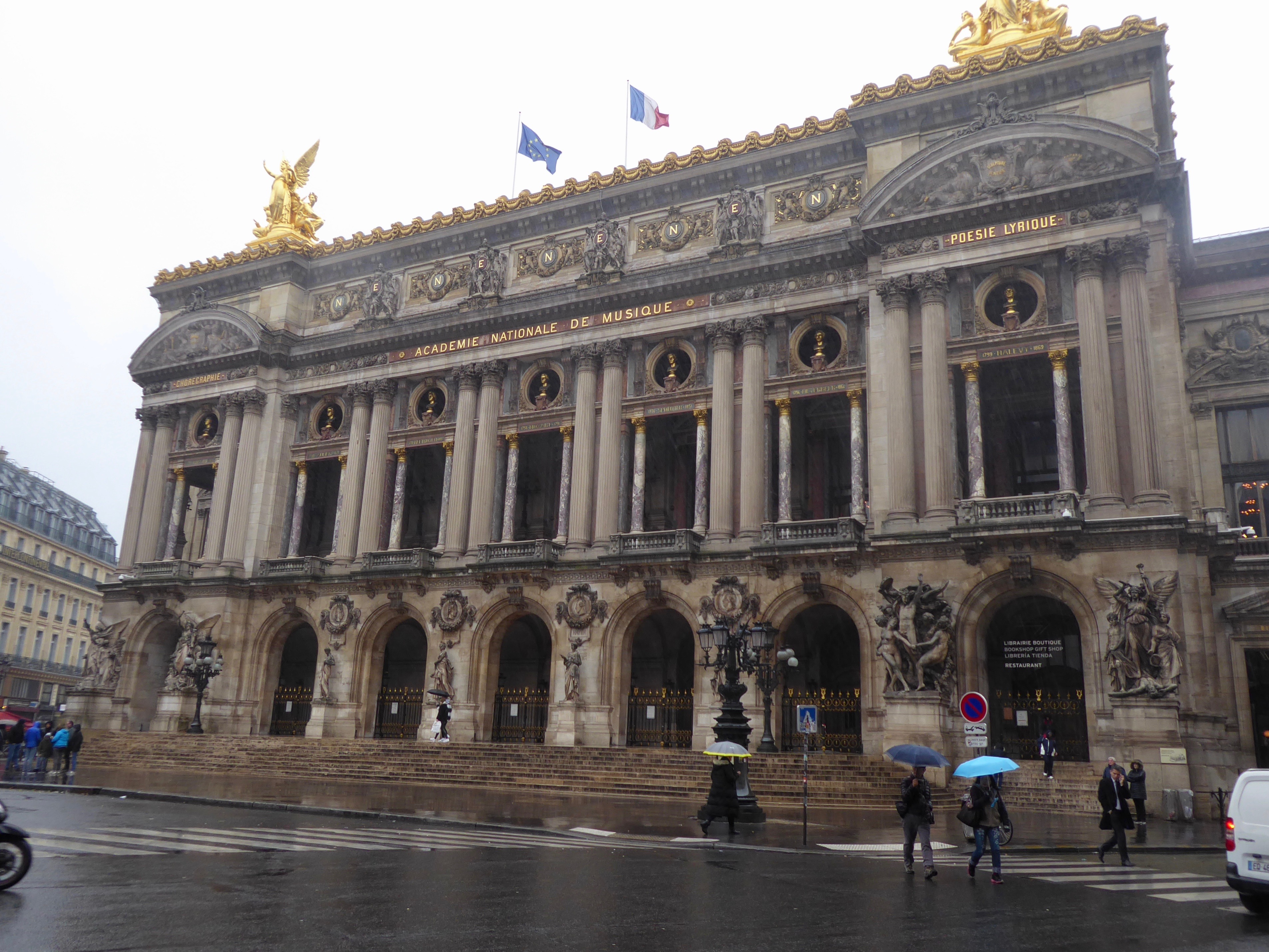 Dreyfus spent five years on Devil’s Island (illustration below) before he was retried and exonerated, then serving in World War I. He died in 1935. 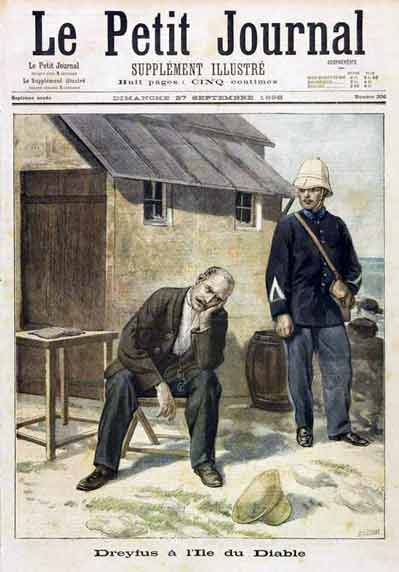 Ross succeeded her husband as governor when he died (after a special election). She wasn’t re-elected but did serve as director of the U.S. Mint. Here’s a photo: 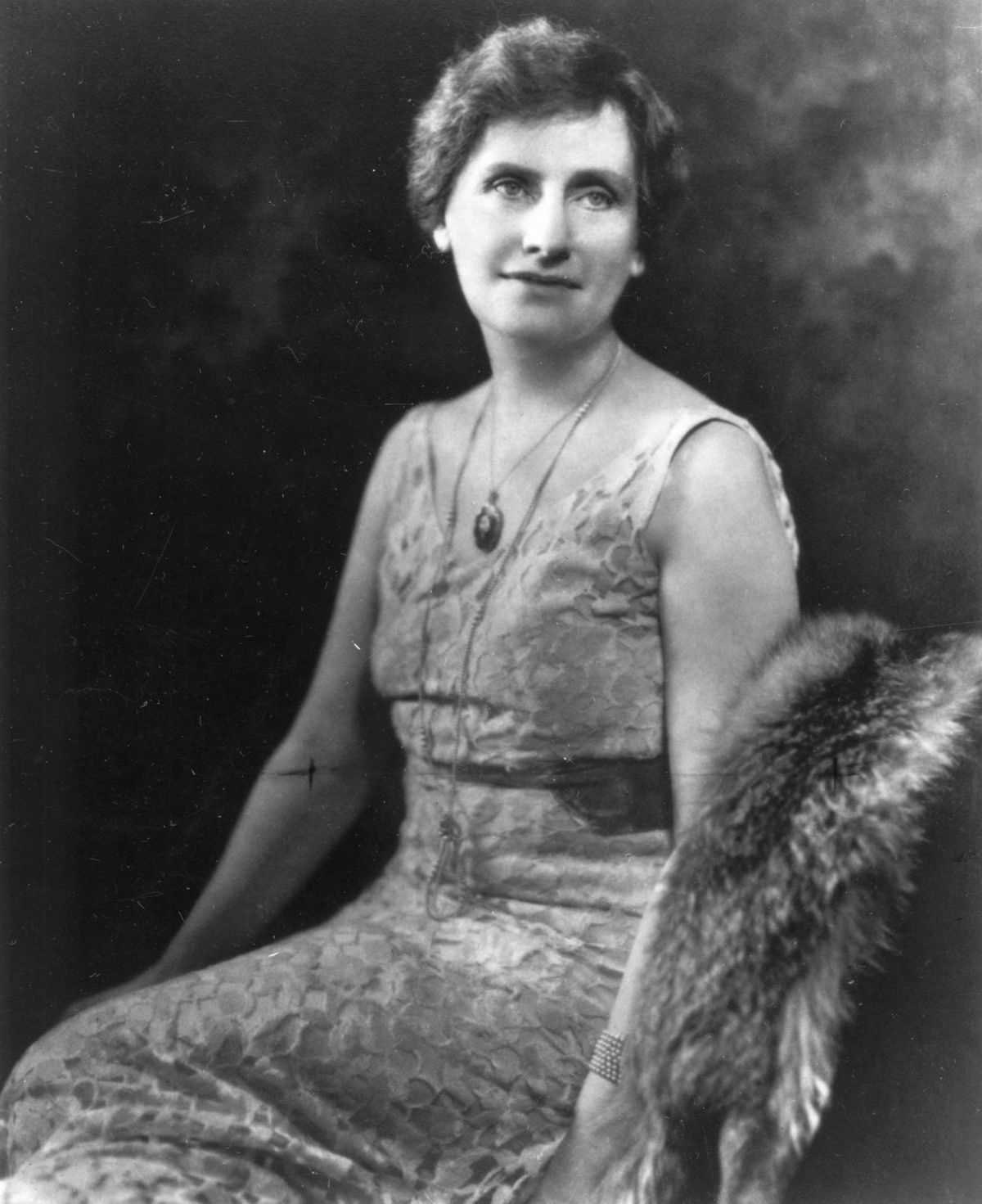 Vanda Base was closed in 1995 but did have a unique rule:

Vanda Station was well known for The Royal Lake Vanda Swim Club. Visitors to Lake Vanda Station could dip into the high salinity waterswhen the icecap edge melted out during summer to form a “moat”, and receive a Royal Lake Vanda Swim Club shoulder patch. Vanda staff would assist the melt by hacking out a “pool”. Many dignitaries and politicians were inducted into the club, The dip had to be naked (Rule 1), complete immersion (Rule 4), witnessed by a “Vandal” (Vanda Station staffer) and with no restrictions on photography (Rule 6) to qualify.  Rule 10 allowed a natural figleaf, but it had to be natural and also naturally green without artificial aid.

Here are some poor saps trying to get into the club: 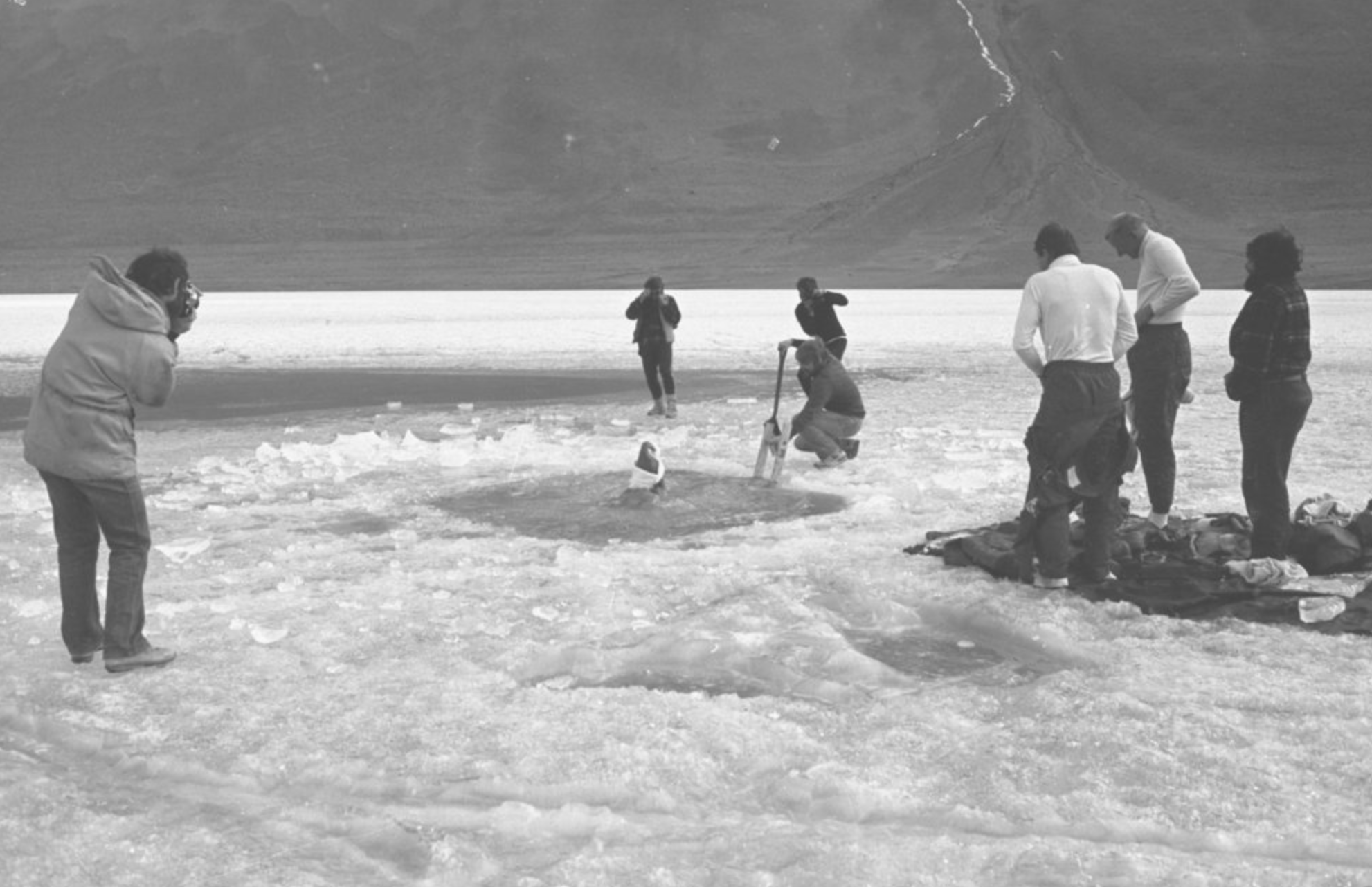 Notables born on this day were, as usual this time of year, few (I think copulations are scarce in April and May):

Keaton is 75 today. Here she is with Warren Beatty when they were involved. 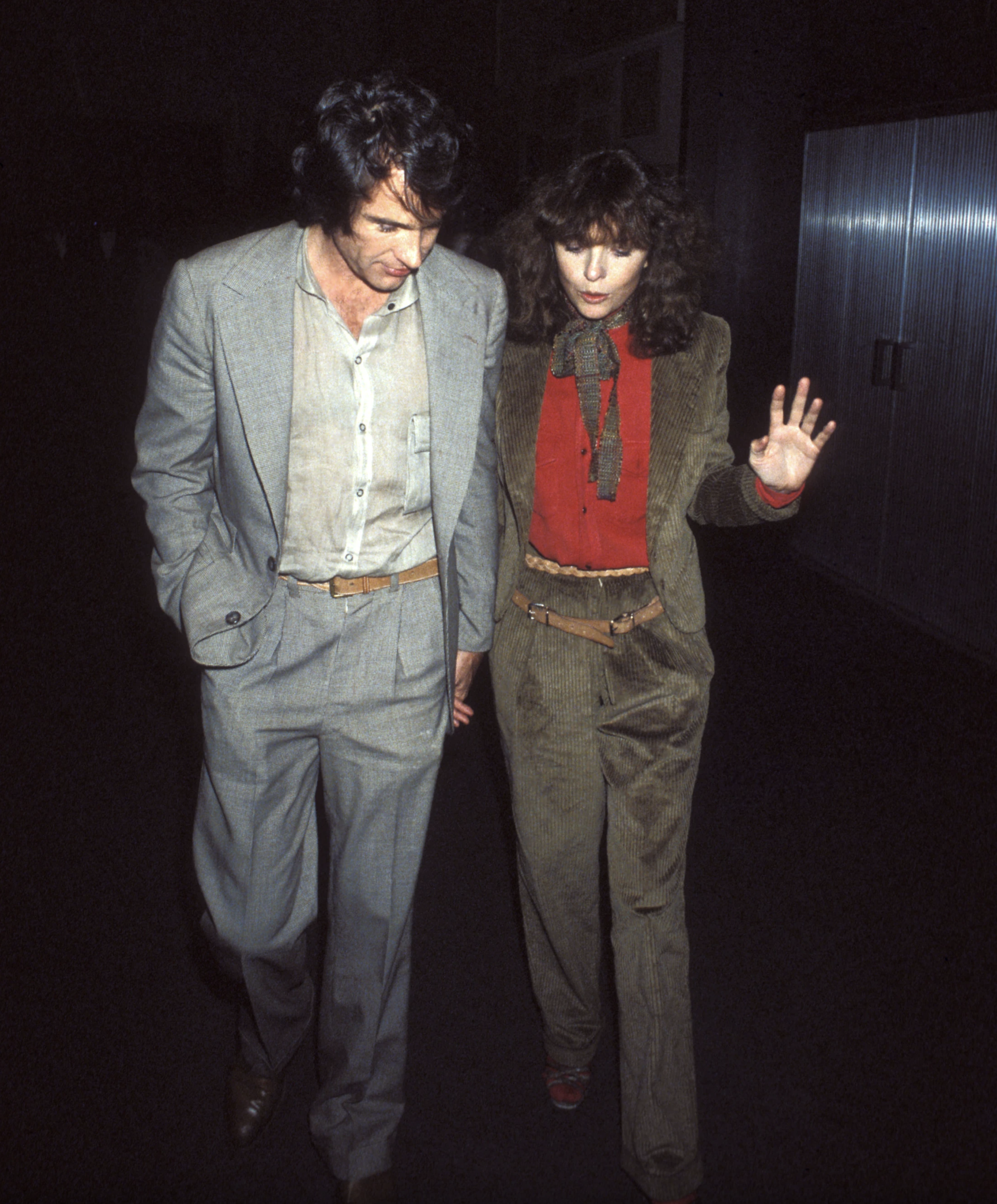 Those who went West on this day include:

Modotti, an excellent photographer as well as the lover of both Edward Weston and—so it’s rumored—Frida Kahlo, had a colorful but short life, dying of a heart attack at 45. Here’s a fairly well known film about Kahlo and Modotti made by avant-garde filmmakers Laura Mulvey and Peter Wollen. There’s some rare video footage of Kahlo and Diego Rivera being lovey-dovey in their Mexico City home.

Here’s a short video about the life and work of Carver:

Meanwhile in Dobrzyn, Hili is touting herself:

Hili: I have to give myself a bonus.
A: What for?
Hili: For lifetime achievement. 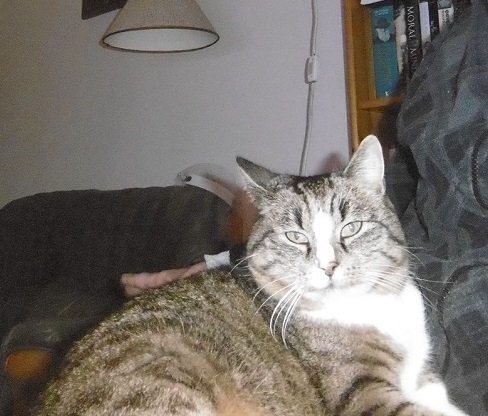 Shhhh! Little Kulka and Szaron and sleeping and cuddling. . . 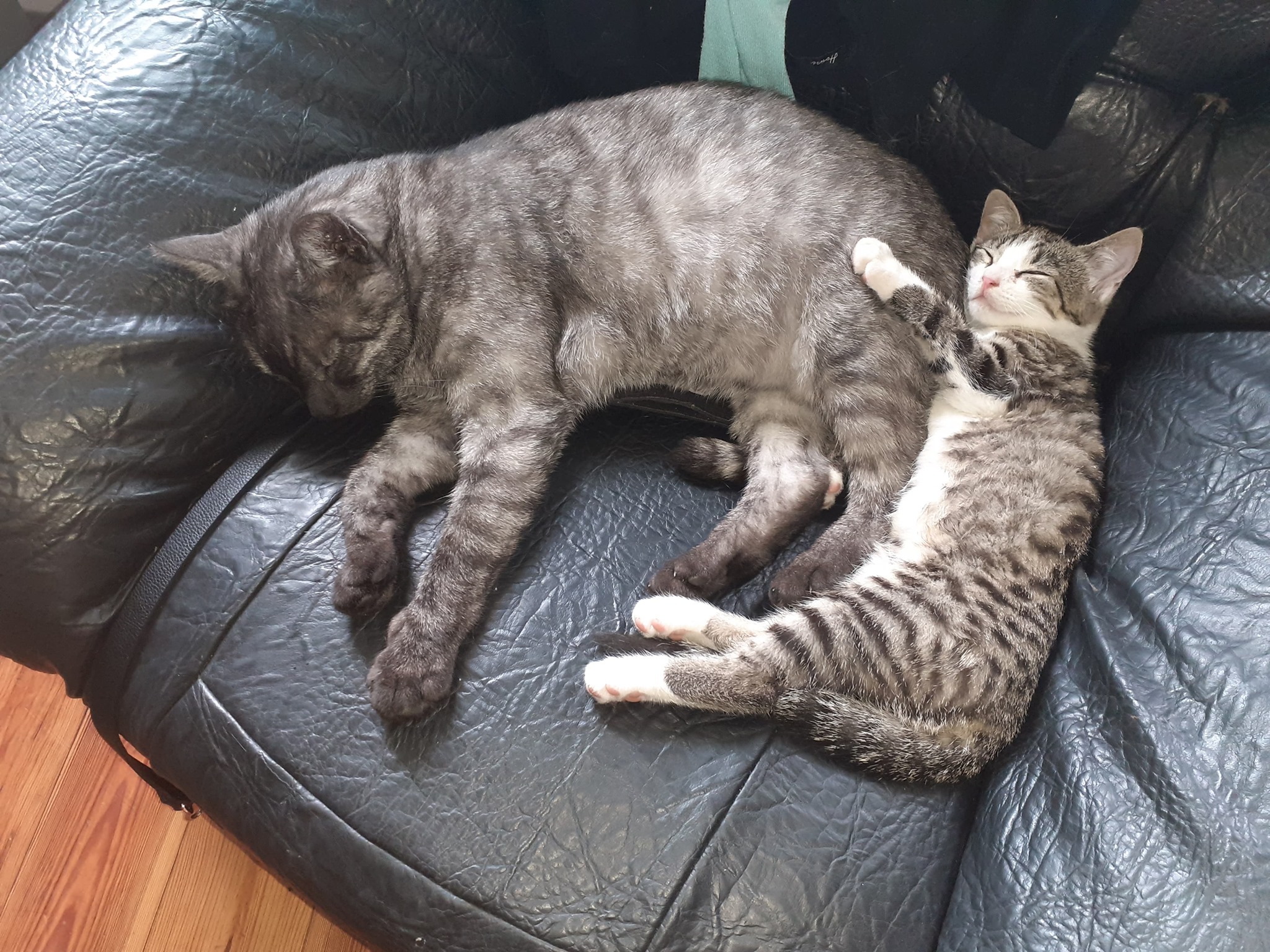 From Stash Krod (a college classmate): 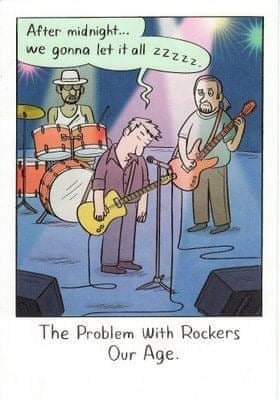 From Divy, who surmises that before lying down, the cat kneaded the guy’s back. 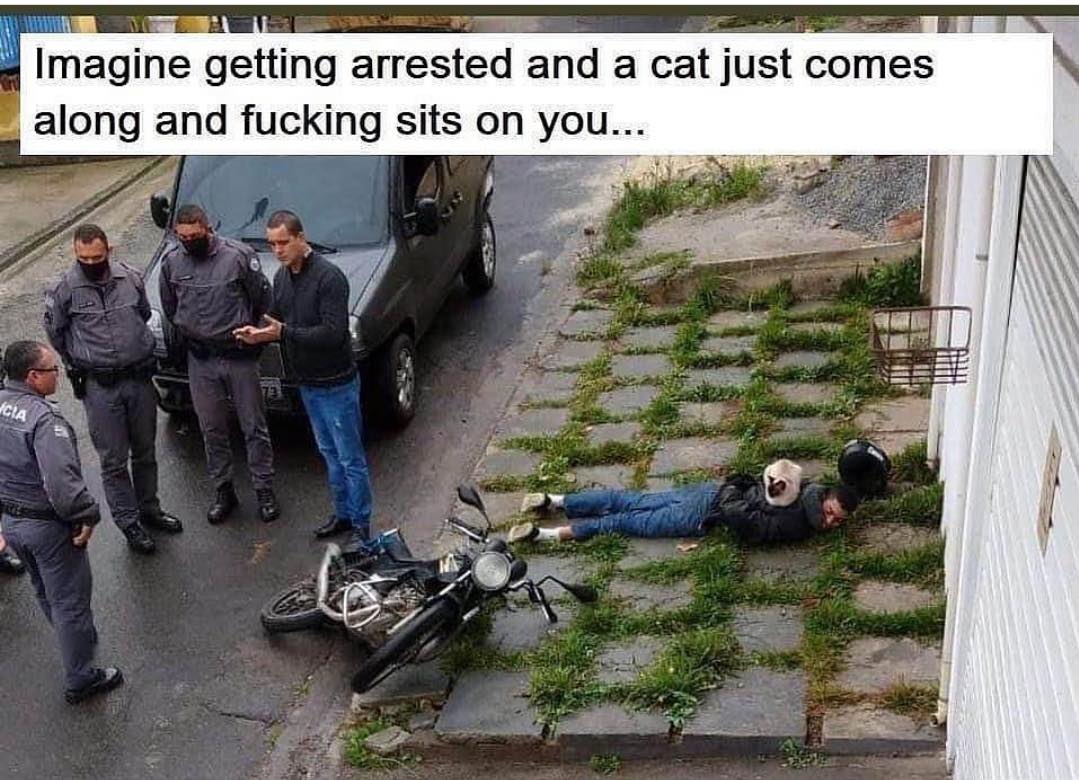 And another Kliban classic from Stash Krod: 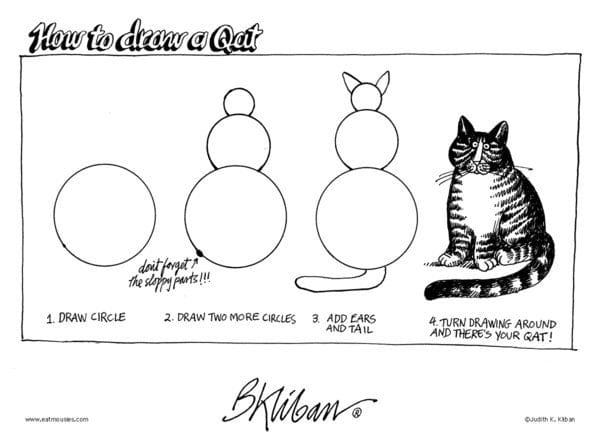 Trump calls his own administration’s statistics for Covid-19 deaths “fake news.” But his tweet doesn’t make any sense:

The number of cases and deaths of the China Virus is far exaggerated in the United States because of @CDCgov’s ridiculous method of determination compared to other countries, many of whom report, purposely, very inaccurately and low. “When in doubt, call it Covid.” Fake News!

Titania’s got a point here (sarcastically, of course). It’s one thing, and a civil thing, not to call attention to someone’s extra weight. But it’s a different thing, and dangerous, to tell them that they’re healthy when they’re way overweight. Best to say nothing (unless your a doctor) rather than lie.

I’ve just given a copy of Cosmopolitan to a friend of mine who has gained weight during lockdown.

I explained that she should feel empowered by her extra flab, and embrace her new identity as a Person of Girth (POG).

She was so moved she actually burst into tears… ✊ pic.twitter.com/jdHKpEG04p

From Barry. If I don’t miss my guess, this is the famous piano-playing cat Nora. Barry notes this:

I do like 0:33 to 0:36. There’s something fetching about that not-quite-atonal move there. I like it. With some more lessons under her paws, I believe this cat could be going places.

Tweets from Matthew. The first one is wokeness gone mad.

The prayer to open the 117th Congress ended with "amen and a-women."

It's not a gendered word.

Below: Some breeds of mallards (white “Pekin ducks” are simply artificially selected mallards) that have mutations that give them pompoms. Crested ducks are carriers of a dominant mutation that produce the pompom; in homozygous form it’s lethal and kills the embryos before they hatch. Breed two crested ducks together and you get in the offspring 1/3 normal ducks and 2/3 crested ducks (actually, among eggs it’s 1/4 normal, 1/2 crested, and 1/4 crested homozygotes that don’t hatch; this gives 1/3: 2/3 among adults).

Mrs Pompom duck, she's a duck with a 'do! pic.twitter.com/gL5y2Sh8JD

Look at that ostrich run!

And yes, this is amazing:

This photo of the sun might not look too impressive… until you realize it was taken at night – not looking up but looking down, through the entire Earth, using neutrinos rather than light. Amazing! https://t.co/GiMKv9NQ7E pic.twitter.com/NVagYvOue1