For decades, the University of Chicago has prided itself as a unified community of scholars whose members were encouraged to (and were free to) debate the big questions. Now, apparently, the big questions have been settled by the uncritical adoption of Critical Theory, as evidenced by what our school is doing to its alumni (see below):

I am now in the sad position of watching my own school slowly go woke, fracturing along lines identified by Critical Theory as separating “homogenous” groups of people residing on a hierarchy of privilege. With the exception of “military alumni”, I hate to see our alumni tribalized in this way, and, truly, don’t see the sense in it..

An alum sent me links to this page, where events for alumni are divided up by race, sex, sexual orientation, and even military service. I’m not sure exactly why they are doing this (click on each screenshot to go to the page and read more). I suppose you could confect a reason, but in truth I think it reflects recent subservience to Wokeness, Critical Theory, and a tribalism once seen as exclusionary but now extolled as a sign of “inclusivity.” 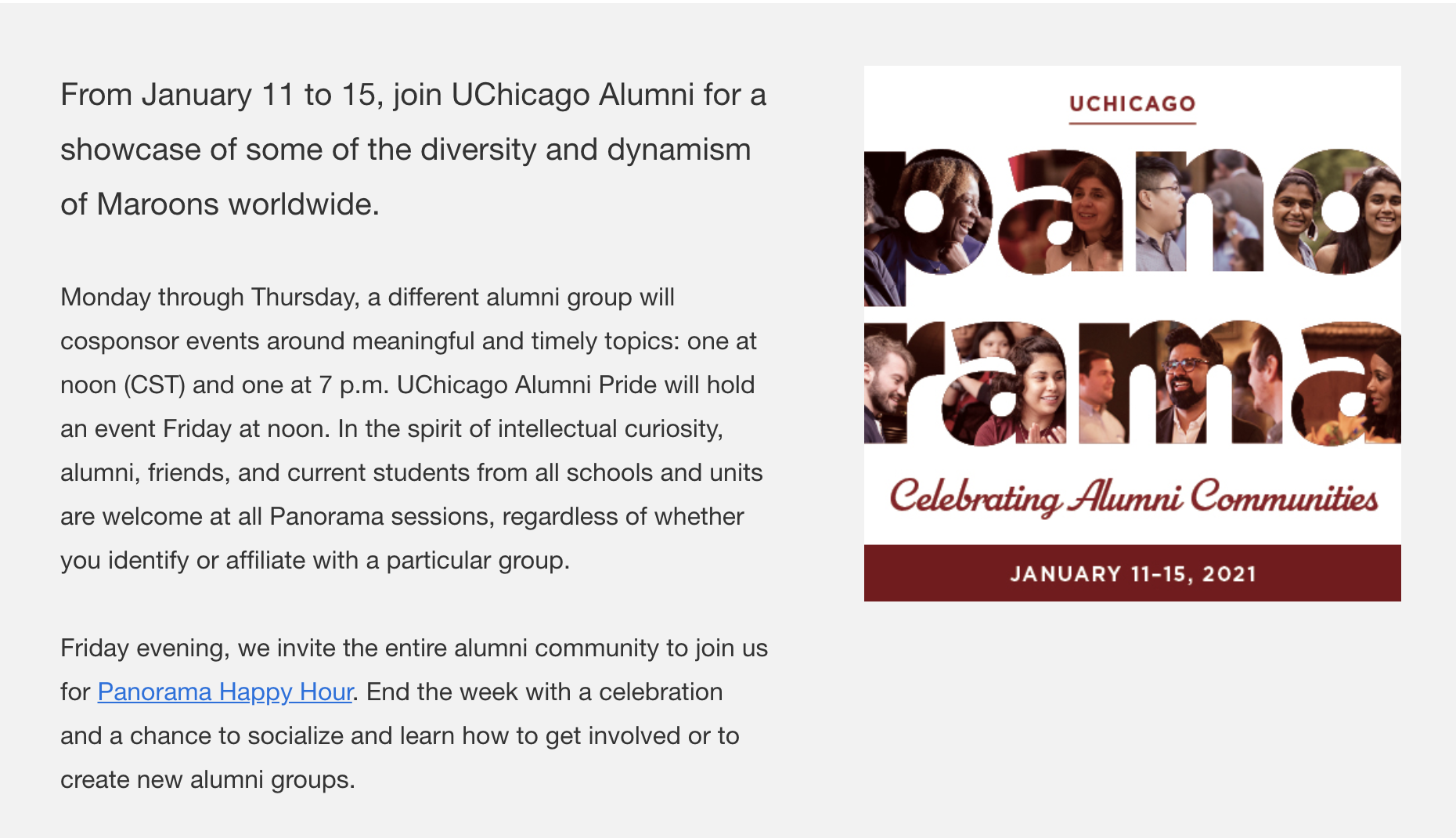 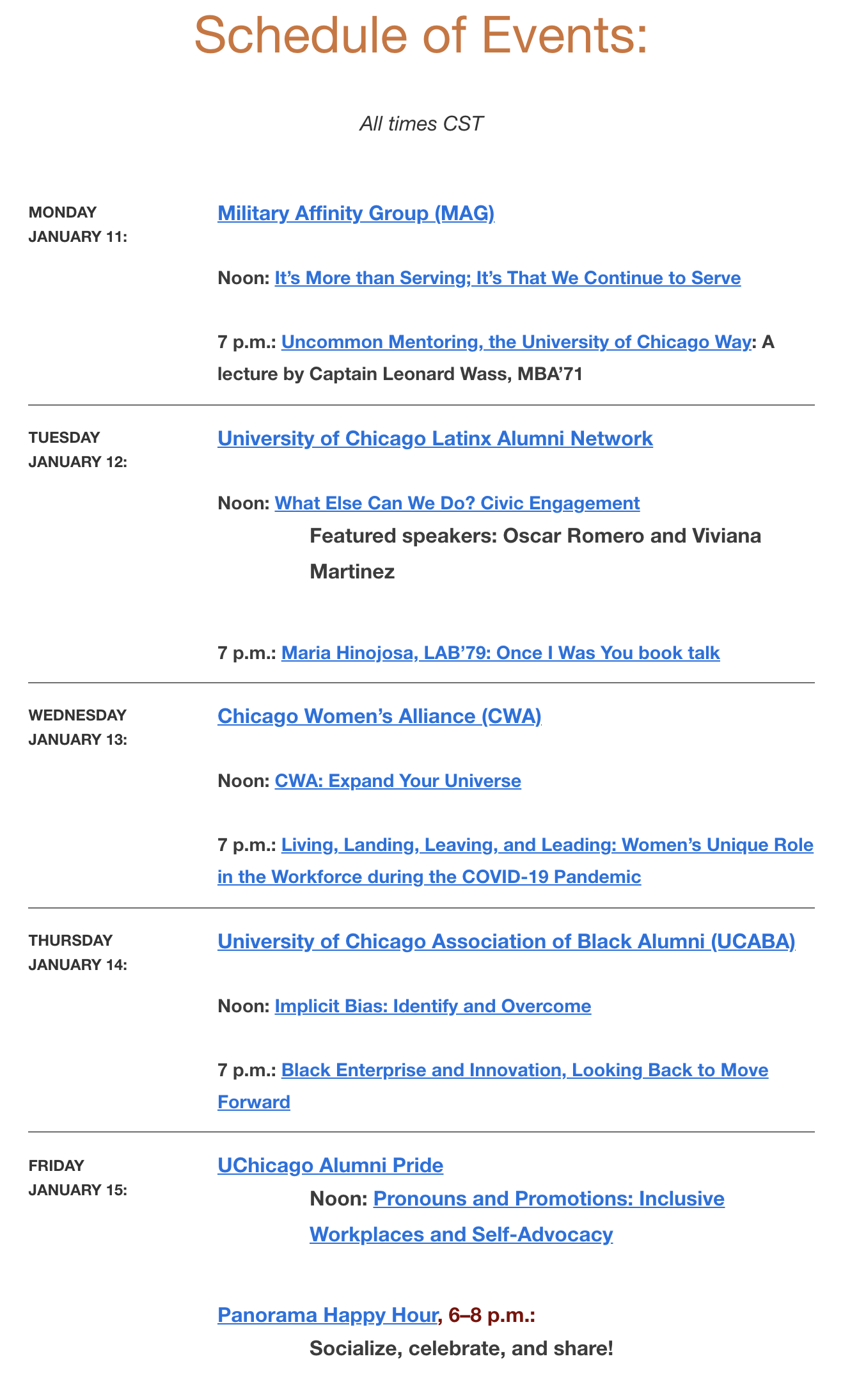 I note with special sadness that one of the Association of Black Alumni events deals with the extremely controversial notion of “implicit bias”. Implicit bias is an important buttress of Critical Theory, asserting that that all white people are racist, whether or not they know it. (See Robin DiAngelo for a popular exposition.) This also holds for all men, who are said to be implicitly sexist.

As far as I know, most scholars without an agenda have abandoned it as a useful notion, along with “implicit bias training”, deep-sixed as a serious and useful endeavor to rid institutions of bias and bigotry (see, for example, here, here, here, here and here). But of course there will be no debate about this at the University of Chicago, where all were once free to question ideas like that. It’s simply presented as a given: 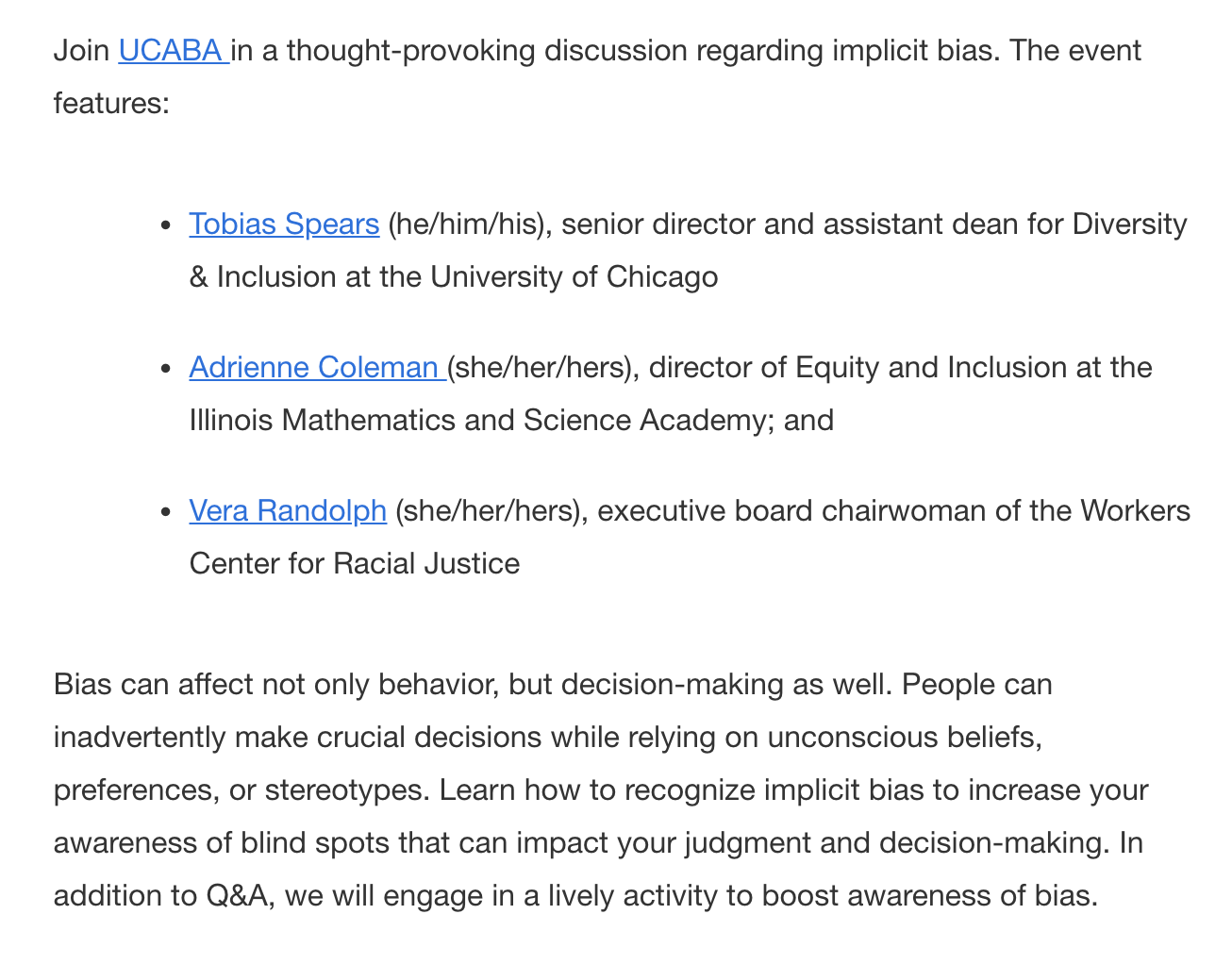 This is not to say, of course, that racism is gone, or that there aren’t bigots peppered through society. Of course there are! But the notion that all people are bigots, whether they know it or not, is an unfalsifiable assumption of Critical Theory, and used solely to gain power over others and advance one’s own power. If you’re racist and don’t know it, there’s nothing you can say, do, or evince to defend yourself—much less change the mind of your interlocutor.

A while back, the University suggested that members of our community might be required to undergo training to eliminate racism and other forms of “bias and exclusion”.  If the University of Chicago does this, it’s finished as the gold standard school for freedom of inquiry.

I may live to see the day that I simply have to accept my school as the midwestern version of The Evergreen State College. We’ll all have to get in the canoe! But for now I’ll continue objecting to such a change. After all, the U of C has encouraged its community to be critical.

52 thoughts on “It’s the end of the world as we know it: More tribalism at The University of Chicago”