If all the articles that were given “Sidney Awards” by New York Times columnist David Brooks this week are as engaging at the one below, then you should read every one. Here we have author Jonathan Rauch, who wrote a prescient book about free speech in 1993, being interviewed by Nick Gillespie, editor at large of Reason.com, where this piece appears. The interview’s about free speech and cancel culture, and is one of the best things I’ve seen written about that culture.

Rauch has been following suppression of speech since this book, which Rauch wrote after what he deemed the true beginning of cancel culture: the fatwa issued against Salman Rushdie for The Satanic Verses (click for the Amazon link; the book is not at all cheap but the reviews are excellent): 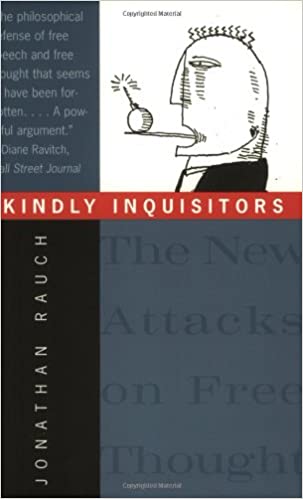 Two more points before we look at the piece. First, it’s not surprising that Brooks, swimming against the current of his own paper, would praise an article so vehemently hard-line about free speech and so opposed to cancel culture—a culture that of course is instantiated by the NYT in stuff like the firing of James Bennet and the rousting of Bari Weiss. Brooks went to the University of Chicago, and now serves on its powerful Board of Trustees, and of course we’re famous for freedom of expression. The University Chicago uses its famed free-expression principles, like the Kalven Report and the “Chicago principles” for free expression, to sell our school to undergraduates and their parents.

Second, we saw Gillespie just the other day, for he interviewed Ira Glasser, former head of the ACLU, in a piece I highlighted.

Now lots of people reject the idea of “cancel culture” as a neologism that isn’t new. It is, they say, simply the same kind of criticism that people have always leveled at their political, moral, and ideological opponents. But they’re wrong, and Rauch tells us why. For cancel culture has little to do with criticism or constructive engagement: its signs, say Raugh—and he’s surely right—show that it’s a form of destructive disengagement.

Or, they say, “you can’t cancel somebody like Steve Pinker—he’s famous and well off from his books.” And it’s true: Pinker has too many admirers to ever be shoved into perdition. But that’s not the point: the point is that we now have a kind of culture that tries to dismiss him without engaging his ideas. Indeed—and this is a point Rauch makes in general—many of those who go after Pinker haven’t even read his books. (They’re too long for the Offended, anyway.)

But click on the screenshot below to read the whole interview, as I’ll quote only a small part of it (indented):

Rauch begins by drawing a crucial distinction between cancel culture and criticism:

Here’s what I think canceling is and why it’s different from criticism—because people always say, “Look, if you can’t stand the heat, get out of the kitchen. People are criticizing Jonathan Rauch. He doesn’t like it, so he calls it canceling.” Criticism is expressing an argument or opinion with the idea of rationally influencing public opinion through public persuasion, interpersonal persuasion.

The people who went after Rushdie had never read The Satanic Verses and were proud of it. In a typical cancel campaign today, you’ll hear the activists say, “I didn’t read the thing. I don’t need to read the thing to know that it’s colonialist or racist.” They’re not using physical murder now. They’re using a kind of social murder of making it very difficult for someone to have a job, for example—to lose their career, or to endanger all their friends. That, of course, is not physical violence, but if you’ve interviewed people who have been subject to it, and I have, you know that it is emotionally and professionally devastating.

And you can immediately think of people who have been “canceled” by those who haven’t either read them or haven’t engaged with their ideas. In just under two minutes I made a list of several examples; here are some. The common factor is that instead of discussing their contentions, the Offended call them names, dismissing them as “racists”, “transphobes”, “misogynists”, “Islamophobes”, and so on:

Feel free to add your own list below. It runs on much longer.

And so on. It’s enlightening to look through the FIRE “disinvitation database” to see attempts to cancel speakers—mostly, but not always, with those cancellation attempts coming from the Left.

I can’t say I agree with all or even most of what these people say, but I do maintain that they should at least be heard. People like Murray, for example, get deplatformed when scheduling talks that have absolutely nothing to do with The Bell Curve.

Rauch also gives a list which is like the DSM of psychology: if you see two or three of these six symptoms, then someone’s getting canceled:

First: Is the intent of the campaign punitive? Are you trying to punish the person and take away their job, their livelihood, and their friends?

Second: Is the intent or predictable outcome of the campaign to deplatform someone and to get them out of the position that they hold where they can speak/be heard and out of any other such position?

Third: Is the tactic being used grandstanding? Is it not talking to the person about their point of view? Is it basically virtue signaling, posturing, denunciation, and sort of ritual in nature?

Fourth: Is it organized? Is it in fact a campaign? Is it a swarm? Do you have people out there saying, as is often the case, “We’ve got to get Nick Gillespie off the air” or “We’ve got to get this asshole fired”? If it’s organized, then it’s canceling. It’s not criticism.

Fifth: A certain sign of canceling is secondary boycotts. Is the campaign targeting not only the individual but anyone who has anything to do with the individual? Are they not only saying, “We think what Nick Cannon is saying on the air is inappropriate”; are they going after the company by saying to boycott it? Are they going after his friends and professional acquaintances? If there’s a secondary boycott to inspire fear so that no one wants to have anything to do with the guy for the fear that they’d be targeted, that’s canceling.

Sixth: Is it indifferent to truth? Well-meaning criticism is often wrong, but if it’s wrong, you’re supposed to say, “Oh, gee. I’m sorry that was wrong.” You’re supposed to pay attention to facts. Cancelers don’t. They’ll pick through someone’s record over a period of 20 years and find six items which they can use against them. This is what literally happened to [Harvard psychologist] Steve Pinker. [JAC: See my analysis of this “cancellation” attempt here.] Tear them out of context and distort them, and if they’re corrected on them, they’ll just find six other items. That’s not criticism. That’s canceling. These are weapons of propaganda.

Rauch correctly sees these items lying on a cancellation continuum, so it’s a matter of taste whether you decide that someone’s in the cancellation crosshairs. But you can see that most of these symptoms center around something relatively new in intellectual circles: not criticism, but demonization and, often, attempts to ruin someone’s career. For sometimes a cancellation mob can also contain a few people who actually engage with the target’s ideas, while most are just a bunch of hounds baying for the hunters. Is that “cancellation” or not. Who knows, and who cares?  But you can see that Rauch has thought a lot about these issues.

I’ll give just one more item: Rauch’s views on the “harm” argument—the claim that speech must be restricted because it causes emotional damage. That, argues Rauch (and I hadn’t thought of this) derives from the Equal Employment Opportunity Commission’s 1989/1990 definition of a “hostile workplace”, which is properly seen as illegal. But that has been taken up by college students, and now the greater public—including the New York Times‘s employees, who helped get rid of Bennet because the editorial he ran created an “unsafe environment” for some staffers—to weaponize any kind of offensive speech.

The emotional safety argument is at the core of what’s going on. In the book I’m writing, I give it no quarter at all. The emotional safety argument, I argue, is fundamentally illiberal, and there is really nothing about it that can be salvaged. It is just inconsistent with the open society. The reason for that is it says that the most sensitive pair of ears in the room gets to decide what everyone else gets to hear or what everyone else gets to say.

If you have to have a safe environment, then you have to proactively scrub the environment of microaggressions, offensive and bigoted statements, and anything else that might cause the environment to become unsafe. That’s a doctrine which has, even conceptually, no conceivable limits. That’s where we wound up.

What starts in colleges infects the wider culture, so it’s worth paying attention to what’s happening with undergraduates. This is one reason I spend so much time reading about college speech, and trying to prevent my own school—once the Gold Standard for free expression—from going down the drain along with Evergreen State, Yale, Princeton, Harvard, Haverford, and just about every nonreligious liberal-arts school in America.

Rauch spends a lot of time worrying about how to respond to students who want to cancel others—those students who admonish him to “check his privilege.” In the end, like John McWhorter, he doesn’t see the sense in engaging these folks, but recommends appealing to those who still are persuadable. This resembles arguing with creationists, whose minds are almost never changed, but there’s still a subset of Americans capable of being persuaded by scientific evidence.

Rauch considers several alternative responses, and comes up with this:

The answer that I finally settled on. . . was: “It doesn’t matter all that much what you say to them, because they’re not listening. That’s what they’re telling you. They’re not listening. What matters is that you not shut up. They do not have the power to silence you if you do not allow yourself to be silenced. Insist on your right to continue the conversation to say what you want to say. Don’t slink away. You won’t necessarily persuade those people, but, as we found in the gay marriage debate, your real target is that third person on the periphery of the circle of the conversation who is seeing one person acting rationally and reasonably and other people acting irrationally and unreasonably. You’re probably winning the heart and mind of that third person, so don’t shut up.”

Yep, we shouldn’t shut up.

As we see above, Rauch is writing a new book, and there’s been so much water under the bridge since 1993 that it’ll be well worth reading.

18 thoughts on “An absorbing discussion of cancel culture”