Andrew Sullivan is a practicing Catholic, but doesn’t like to discuss his own beliefs.  I’ve had two interactions with him about this issue, though the latest wasn’t really an “interaction.”

In 2011, Sullivan pounced on me in his column in the Daily Dish for assuming that people take the Bible literally when it comes to the creation of Earth and its inhabitants. His piece can be found at the archived website, and I also posted about it, saying this and quoting Sullivan:

At any rate, Sullivan makes this accusation:  I am one of many deluded fools who thinks that the account of Genesis was meant to be taken seriously.  From the outset it was an obvious metaphor, and intended to be seen as such!

“There’s no evidence that the Garden of Eden was always regarded as figurative? Really? Has Coyne read the fucking thing? I defy anyone with a brain (or who hasn’t had his brain turned off by fundamentalism) to think it’s meant literally. It’s obviously meant metaphorically. It screams parable. Ross sees the exchange as saying something significant about the atheist mindset – and I largely agree with everything he says, except his definition of “fundamentalist” doesn’t seem to extend much past Pat Robertson. It certainly makes me want to take Jerry Coyne’s arguments less seriously. Someone this opposed to religion ought to have a modicum of education about it. The Dish, if you recall, had a long thread on this subject in August. No one was as dumb as Coyne.”

I responded by quoting a number of theologians, including Aquinas and Augustine, who took the Genesis story literally, even though some church fathers noted that it had a metaphorical interpretation as well as a literal one. And of course about 40% of all Americans are Genesis adherents. In response to Sullivan’s insults about my dumbness, and his assumption that I hadn’t read Genesis, I called him a “mush-brained metaphorizer.”

My anger at Sullivan, inflamed by his insults, has since cooled. We’re on the same side on many issues, particularly “wokeness”, and his columns are very often rational and perspicacious. Still, he occasionally drags his faith into his column (now The Weekly Dish, a subscriber-only site to which I do subscribe). And when he mentions faith in a positive way, it now conflicts all the more jarringly with his avowed adherence to rationality and science.

That led to my second interaction, when he wrote this:

. . . I don’t know whether liberalism can survive without some general faith in an objective reality and a transcendent divinity. That’s why I suspect a reinvention and reboot for Christianity is an urgent task.

Well, I couldn’t let that stand, so I wrote what I thought was a good “reader’s dissent”, pointing out that the happiest, most well-off, and liberal democracies of the world were the least religious. Sadly, he didn’t publish my gem, so I put it on this site. So be it.

But I always wonder what the man really believes about his faith, and I’d love to debate him on the dissonance between his Catholicism and his constant banging on about the need to be rational and adhere to the facts. In his column this week, he makes a telling statement in the midst of criticizing Trumpian Christianists (more on them in a second) for their refusal to face facts about the election. He indicts not only the Right, embodied by the unhinged Eric Metaxas, but also the Woke Left, represented by Ibram X. Kendi, as ignoring evidence. If you’re a member, click on the screenshot below: 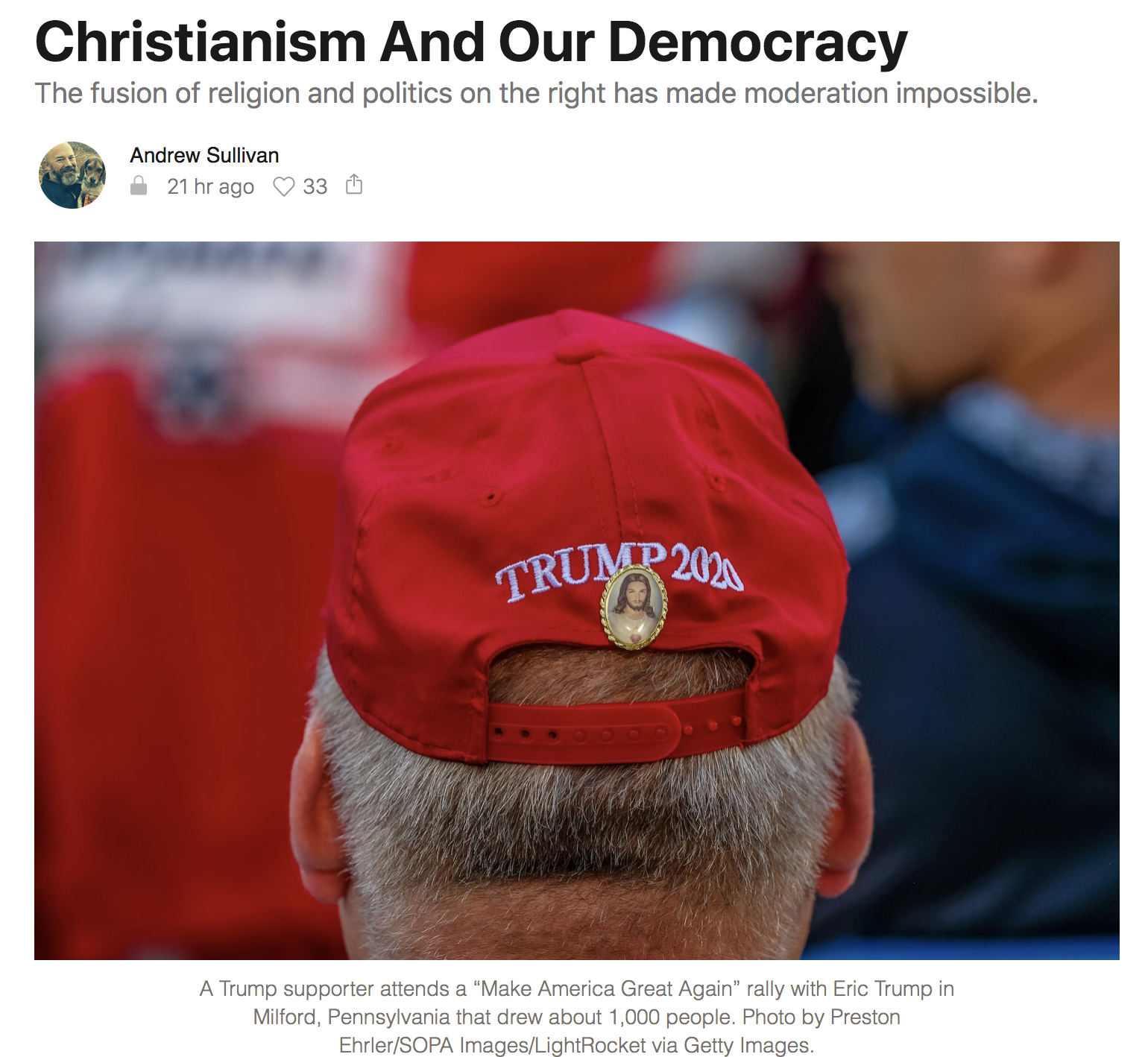 Toward the end of what is a readable and incisive essay, Sullivan makes the statements below below while discussing the refusal of “Christianists” to accept the election results, claiming instead that Biden’s victory is the result of a widespread conspiracy. (The emphasis below is mine.)

The right is not unique in conspiratorial delusion, of course. The refusal of many on the left to accept Tump’s legitimate victory in 2016 was real and widespread. Both Hillary Clinton and John Lewis declared Trump an illegitimate president. Remember the Diebold machines of 2004? Not far from the Dominion stuff today. And the intensity of the belief on the left in an unfalsifiable “white supremacist” America has a pseudo-religious fervor to it. The refusal of Metaxas to allow any Republican to remain neutral or skeptical is mirrored by Ibram X. Kendi’s Manichean fanaticism on the far left.

But the long-established network of evangelical churches and pastors, and the unique power of an actual religion to overwhelm reason, gives the right an edge when it comes to total suspension of disbelief. Christianists are not empiricists or skeptics. They’re believers. This time around, it’s belief in a “multi-layered, multi-dimensional” conspiracy involving hundreds of people in several states, rejected by almost every court. You can fact-check that as easily as you can fact-check the Resurrection.

But what else does that mean except that there’s as little evidence for the Resurrection as there is for Republicans’ election conspiracy theories? In other words, no evidence! I’m forced to conclude, then, that Sullivan, as a Catholic, rejects Jesus’s literal Resurrection. Maybe he thinks it’s some kind of metaphor. My conclusion is strengthened in the next bit when he once again touts empiricism (my emphasis):

To survive, liberal democracy must have some level of moderation, some acceptance of the legitimacy of the other side, and room for compromise. It has to be based in empiricism, shared truth, deliberation and doubt. Fundamentalist religion has none of those qualities. It’s all or nothing.

One can conclude that Sullivan indeed equates belief in the Resurrection with fundamentalism, but of course that’s not the case: if anything, Jesus’s revival is a critical tenet of mainstream Catholic (or other Christian) faith, fundamentalist or not. It’s a linchpin of the Christian story of sin and salvation. Note also that he avers here that liberal democracy must be based on empiricism and shared truth, while earlier he said that liberal democracy, to survive, also has to have some faith in a “transcendent divinity”, and requires a “rebooted Christianity.” I’m here to tell Sullivan that basing democracy on empiricism automatically rules out basing it on any Abrahamic religion, including a “transcendent divinity” theistic or not.

Enough. The rest of the article is good, describing a group of hardcore Republican Christians, whom he calls “Christianists” to parallel “Islamists”, as both groups see no distinction between their faith and politics. Trumpian Christianists apparently see Trump, with all his flaws, as God’s own second saviour to redeem both ourselves and our country.

To Sullivan, the existence of Christianists explains the plethora of Republican loons who still won’t accept the election results. But I’m not as sure as he that this group will pose a real threat to America after Biden is sworn in.

In a manner very hard to understand from the outside, American evangelical Christianity has both deepened its fusion of church and state in the last few years, and incorporated Donald Trump into its sacred schematic. Christianists now believe that Trump has been selected by God to save them from persecution and the republic from collapse. They are not in denial about Trump’s personal iniquities, but they see them as perfectly consistent with God’s use of terribly flawed human beings, throughout the Old Testament and the New, to bring about the Kingdom of Heaven.

This belief is now held with the same, unwavering fundamentalist certainty as a Biblical text. And white evangelical Christianists are the most critical constituency in Republican politics. If you ask yourself how on earth so many people have become convinced that the 2020 election was rigged, with no solid evidence, and are now prepared to tear the country apart to overturn an election result, you’ve got to take this into account. This faction, fused with Trump, is the heart and soul of the GOP. You have no future in Republican politics if you cross them. That’s why 19 Republican attorneys general, Ted Cruz, and now 106 Congressional Republicans have backed a bonkers lawsuit to try to get the Supreme Court to overturn the result.

Biden’s victory was not God’s will. Therefore it couldn’t have happened.

Below: Sullivan’s fears, which may well be exaggerated. I certainly hope they are:

And Trump is at the center of [Christianists’] belief system now, which includes all his lies. The relationship of many with him is that of evangelicals and their pastor: a male, patriarchal figure who cannot be questioned and must be obeyed. Trump’s political genius has been in sniffing out this need to believe, and filling it, all the time, tweet by tweet, lie by lie, con by con. No wonder Trump Trutherism is now a litmus test for the Christianist faith. . .

. . . Not only is it all or nothing, but the mandate to believe it, and act on it, is from God himself. When this psychological formation encounters politics, it cannot relent, it cannot change its mind, it cannot simply move on. And a core element of our politics right now — and part of the unprecedented resilience of Trump’s support — is this total suspension of judgment by a quarter of all Americans. When that certainty of faith met a malignant narcissist who cannot admit error, a force was created that continues to cut a ferocious swathe through our culture and our democratic institutions.

And if God Almighty calls for the overturning of a democratic election by force or violence? Then let the walls of Jericho come tumbling down.

I still predict little or no right-wing violence after January 20, but I’m not going to bet on it. The GOP, with 100+ of its Congresspeople joining the crazy Texas lawsuit trying to overturn the election, has become a swarming beehive of of truthers, conspiracy theorists, and, of course, gun nuts.

67 thoughts on “Andrew Sullivan implies that the Resurrection probably didn’t happen, and then describes “Christianism” as a big threat to America”