Here’s an example of behavior by an elected member of the U.S. Congress, Rashida Tlaib (D-Michigan), which has been completely ignored by “mainstream” media even though it’s surely a story that Americans would want to know. Don’t we need to hear the views of those who represent us in Congress? And surely if a Congresswoman tweeted that she favored the elimination of the Palestinian territories, that would be front-page news in the New York Times and Washington Post. But if a Congressman (Tlaib in this case) promotes the elimination of Israel, well, that’s boring “dog bite man” news for the Woke Media—news not worth reporting.

Yet here’s a tweet that Tlaib issued last Sunday, which parrots a slogan often employed by two groups: anti-Israel Arab governments and organizations, and the Anglophonic Far Left: 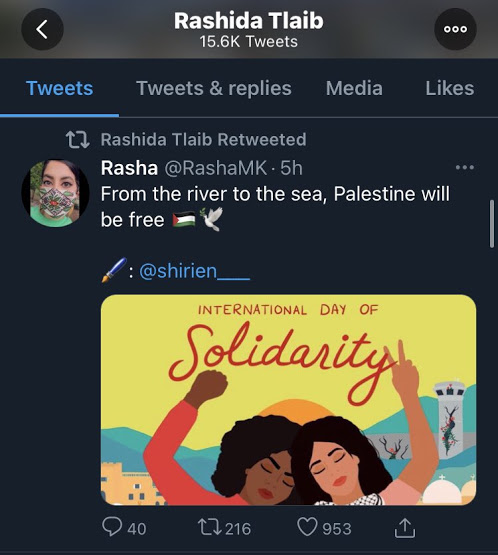 The slogan, “From the river to the sea, Palestine will be free,” refers to unifying all Palestinian and Israeli territory into one state. Proponents of this insane plan think it will bring peace and comity, which it surely will not. In Israel there are about 6 million Jews and 2 million Arabs, and there is relative harmony for the Arabs, who are longstanding Israeli citizens and even serve in the Knesset, the Israeli parliament. In Gaza there are about 2 million Arabs, and in the West Bank about 2.5 million Arabs. Unifying Israel with the Palestinian Territories, and leaving out for the moment the Israeli Arabs, would result in a 50:50 mixture of Israelis and Palestinian Arabs, many of whom have been brought up thinking that their mission is to kill Jews. That alone would make a unified state untenable.

It gets worse if you accept the Arabs’ and Far-Left’s demand that Arabs also have the “right of return”, which means that every descendant of the 600,000-800,000 Arabs who fled Israel in 1947-1948 to avoid the presumed destruction of Israel—which didn’t happen—would have the right to come back and live in Israel. This is several million people, for those descendants live in Lebanon, Jordan, and Syria, as well as other countries like the U.S. (Rashida Tlaib herself would have the right of return, as well as Linda Sarsour). Presumably many Arabs in the West wouldn’t return to Israel, but surely many in the Middle East would, and that would turn the 50:50 ratio into one that was Arab by a huge majority. Israel would no longer be a Jewish state, but, worse, genocidal killing would ensue.

This is why the slogan “From the river to the sea, Palestine will be free”, is both disingenuous (promising as it does ethnic harmony, as with the “dove of peace” in Tlaib’s tweet), and untenable, for it would lead to mass destruction and death. It is also anti-Semitic, for it would lead to the death of Jews and the end of Israel as a Jewish state. But its proponents know this very well, and that’s why they too are both duplicitous and anti-Semitic. (The only tenable solution for comity in the Middle East is a two-state solution, which I favor but which increasingly looks unattainable.)

And that’s presumably why Tlaib took down the tweet above the day after she tweeted it (I have a screenshot above). Tlaib does favor the right of return and a one-state solution (she also favors BDS), but to explicitly say that she favors the elimination of Israel as a Jewish state would be too much for Americans to take.

Although the American “progressive Left” is, by and large, anti-Semitic, they are secretive about it, as was the Labour Party in the UK. Alexandria Ocasio-Cortez, another “squad member”, also has an anti-Semitic bent, for she’s been a constant critic of Israel but not of the Palestinian Authority (or Hamas), and has waffled on BDS (she voted against a Congressional resolution, sponsored by a Democrat, to condemn the BDS movement, winding up on the losing side of a 398-17 vote). And of course there’s Ilhan “It’s about the Benjamins, Baby” Omar, who is also, I venture to say, anti-Semitic.

Because the progressive Left is anti-Israel and by extension somewhat anti-Semitic, you won’t find anything about Tlaib’s position or tweet in papers like the New York Times or the Washington Post. If you do a Google search for “Rashida Tlaib from the river to the sea” , you’ll find links only to only Jewish and right-wing organizations like Fox News or Elder of Ziyon.

This tacit alliance between “progressive” Jews and the American Right pains me, for Jews have traditionally been Democrats, closer to the Left end of the political spectrum. Further, while I like some of the aims of “progressive Democrats,” I simply can’t be on board with a policy that wants to end the state of Israel and promote carnage. The problem is twofold, and this is the take-home lesson: the American far Left is anti-Israel and flirts with anti-Semitism, and the liberal media in the U.S. is pretty much on that same page.

With news media like that, you’re not going to be reading about any criticisms of Palestine or Palestinians—nor of any of the Squad’s anti-Israel views—in the liberal media. For some years they’ve tacitly ignored the anti-Semitism of the Left. Well, they ignore it at their peril, for it brought down the Labour Party in Britain. Likewise, it could seriously damage the “progressive” Left in America.

61 thoughts on “Rashida Tlaib calls for elimination of Israel, then backs off for appearance’s sake”