At Brown University there are two bronze copies of statues of Roman emperors. One is of Marcus Aurelius: 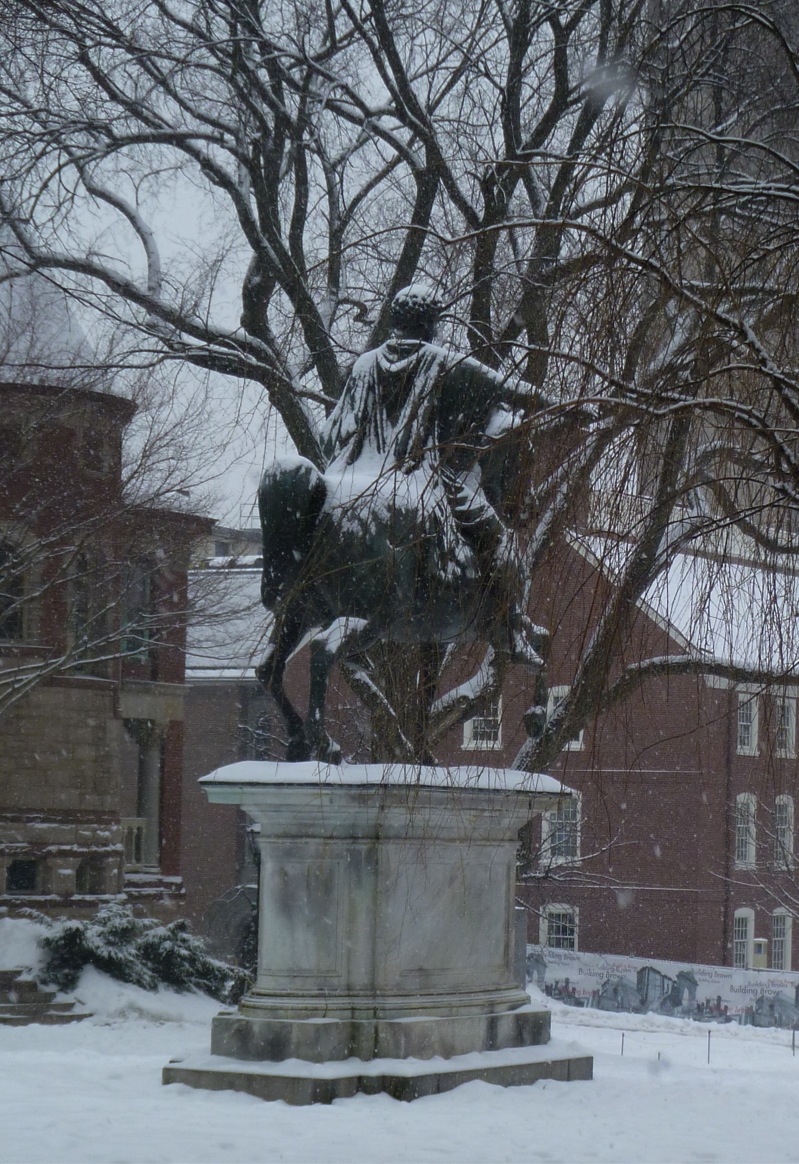 . . . and the other is of Caesar Augustus (sources of both photos, and a discussion of the statues’ history, are here) 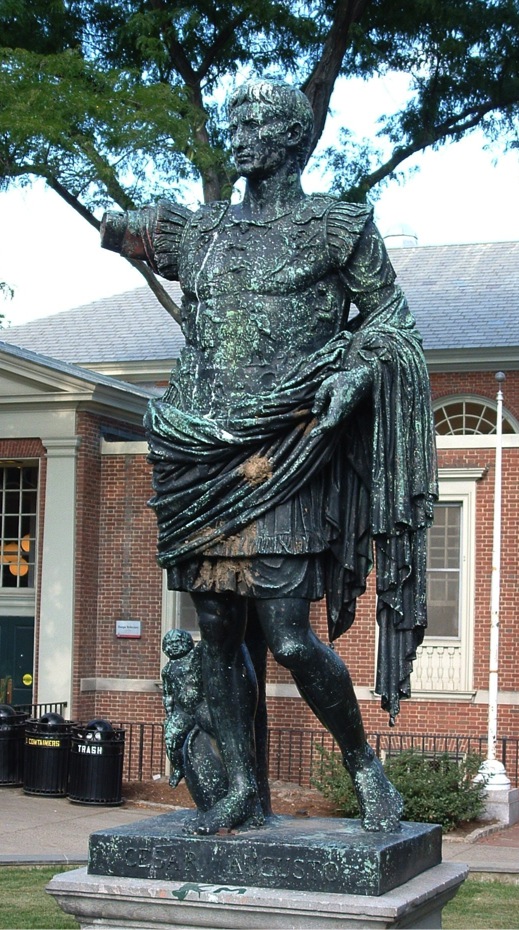 Well, all statues these days are subject to intense scrutiny, and a group of 6 students representing “Decolonization at Brown” (endorsed by 28 student organizations at the University, including the Brown Birding Club), wrote a petition/letter at the Blogonian—an independent student newspaper at Brown University—about the two monuments. The students and groups strongly assert that the two statues are harmful because they exemplify white supremacy and values and thus are offensive to students of color. They have to come down!

What’s telling about all the beefing is that the claim that the statues symbolize colonialism and white supremacy, and were put up to show that Brown was trying to inculcate its students with whiteness, are not based on fact, but on student offense. There’s no record of anything intentions to codify white supremacy. Rather, the statues were clearly erected to symbolize Rome as an antecedent of Western culture and philosophy.  Some quotes from the beef above:

Last spring, Brown’s Public Art Committee proposed to restore and relocate the bronze copy of a Roman statue of Augustus, which currently stands in front of the Ratty, using tens of thousands of dollars solicited from an unnamed donor. Under this proposal, the statue would be moved to the Quiet Green, across from the Slavery Memorial.

We strongly oppose this proposal and urge the Public Art Committee—and any community members or donors who are invested in the role of public art at Brown—to replace both the statue of Augustus and the statue of Marcus Aurelius (currently on Ruth Simmons Quad) with new works of art commissioned from local Black and Indigenous artists.

These monuments were brought to our campus with the goal of upholding the ideals of the “perfect” white form, white civilization, white supremacy, and colonialism—ideas that we believe are incompatible with Brown today. Consequently, removing and replacing these statues is a crucial step in confronting such legacies. We see this as a moment of immense opportunity for transformation and reflection, and we hope that the broader campus community, the Public Art Committee, and potential donors will, too.

It goes on and on like this; the language is by now very familiar:

Because they are not actually from ancient Rome, we must understand them as modern monuments to a set of values and political stances which existed when they were commissioned for Brown’s campus.

. . . The connection between the U.S. and Rome is entirely ideological. There is no natural or direct tie between the two—there is only a fabricated lineage of whiteness. Statues made in the Roman-style, like the two at Brown, are intended to materialize this connection. They convey the supposed supremacy of white values over non-white cultures, a reading in which non-white people should learn and aspire to whiteness. Alt-right groups, like the Proud Boys and Identity Evropa, use this idea of “white virtue” to ground white supremacy.

. . . To the significant number of students, staff, and faculty at Brown today who are not white, these statues function as a constant reminder that Black, Indigenous, and people of color are not included within Brown’s conception of the University community. The presence of these statues is therefore not only incompatible with, but violates Brown’s stated commitment to inclusion, equity, and change.

The authors and supporting organizations call for the complete removal of the statues.

I deny, first of all, that these statues are harmful, or that any students genuinely feel offended by them (there’s also an antiracist monument calling attention to Brown’s involvement in slavery). The offended, I argue are pretending to be offended, using offense as a means of asserting power—of making the campus do what they want. If these statues are removed because Rome engaged in expansion, well, let’s just write off every monument to Greece and Rome, both bellicose empires, but also empires that helped form the ideals of the West. And why not expunge all Roman and Greek writing from the curriculum as well?

At least one student— a woman of color—has pushed back in an article at the Brown Daily Herald, another student newspaper. While Bhaskar could use some lessons in how to write more simply (I’d recommend her reading Strunk and White or Orwell’s “Politics and the English Language”), she does make the point that what goes for statues can also go for curricula. After all, if a Roman statue is offensive, what’s to ensure that readings of Roman and Greek thinkers won’t be expunged, too? No more Meditations of Marcus Aurelius the Colonizer and White Supremacist.

A quote from Bhaskar:

Now, more than ever, the world needs graduates and scholars who are able to recognize the many intricacies and layers of the past and who can use this multifaceted knowledge to consume historical and artistic vestiges of the past with intentionality and a capacity to use such lessons to guide progress. The University must move beyond tendencies to censor “uncomfortable” or “controversial” topics that fail to echo the outspoken post-modernist and left-leaning images associated with Brown in favour of upholding the tenets of free inquiry and the preservation of nuance within the exploration of historical relics. Outlining tangible steps for creating robust anti-racist curricula, while equipping students with the patience, wisdom, and skill-set to grapple with uncomfortable realities and relics of the past, is crucial for the University to uphold its mission of “communicating and preserving knowledge and understanding in a spirit of free inquiry.”

There’s one student who’s much wiser and more thoughtful than the many who have a kneejerk reaction to classical statues as symbols of “white supremacy.”

Meanwhile, on the campus of the University of Wisconsin at Madison, a statue of Abraham Lincoln sits in front of the administration building atop a hill. I saw this when I visited Madison to speak at the FFRF: 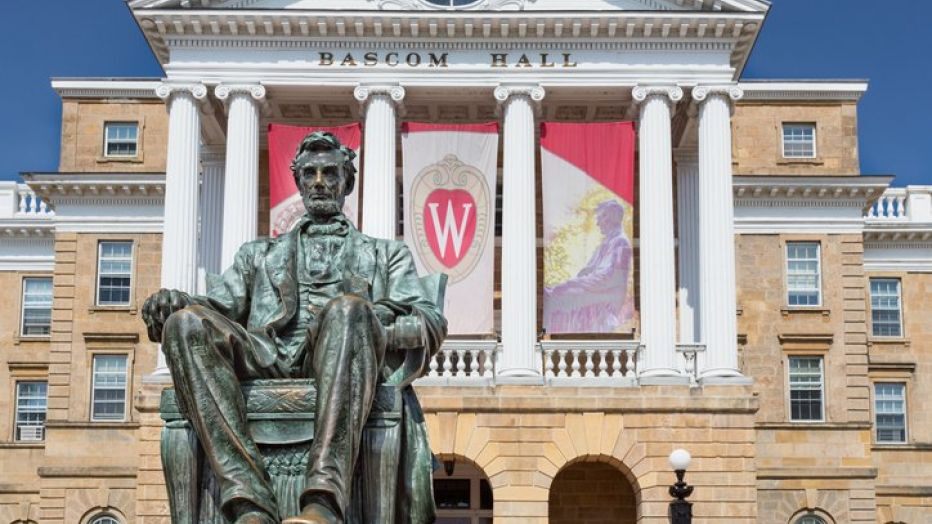 Well, Lincoln is in bad odor, too, these days. Lincoln! The man who fought a war against those who wished to preserve slavery, and issued the Emancipation Proclamation! Why Lincoln? Well, read and weep again:

A group of students are calling for the removal of the Abraham Lincoln statue at the top of Bascom Hill on the UW-Madison campus.

This comes after protesters took down two statues on the state Capitol grounds: one embodying the state’s motto “Forward” and another of Civil War Union Army Col. Hans Christian Heg. The students say despite the former president’s role in the abolition of slavery, he had a racist past in supporting the notion of a “superior” white race.

“I just think he did, you know, some good things…the bad things that he’s done definitely outweighs them,” Nalah McWhorter, president of the Wisconsin Black Student Union, told the Badger Herald.

Lincoln was memorialized on the university campus for his role in creating land grant universities, of which UW-Madison is one. The land for the campuses was largely seized from Native American tribes in 1862 through the Morrill Act. Lincoln also ordered the execution of 38 Dakota men that same year.

The students say the sum of the former president’s actions warrant taking down the statue.

“And I do want the 100% removal of the statue. I don’t want it to be moved somewhere or anything like that. I want it removed,” McWhorter said.

And on what basis did “the bad things Lincoln did definitely outweight the good ones”? Does Ms. McWhorter know how many lives were saved or made better by the ending of slavery in America? Yes, Lincoln did order the execution of 38 Dakota tribesmen who killed settlers and soldiers, but he also commuted the death sentences of many more of the convicted. But against that we must measure Lincoln’s legacy, and I can’t imagine what kind of mind would decide that Lincoln caused more harm than good. Again, I assert that this is faux outrage disguising an attempt to get power over a university. Removing a statue of Lincoln, or of Roman emperors, will do exactly nothing to ameliorate racism or better the opportunities for minorities.

In fact, following a student petition with many demands, the first of which was to remove the Lincoln statue (it also demanded the abolition of the campus police), a resolution was brought before the student government demanding attention to BIPOC demands, including doing something about the Lincoln statue, one of the “remnants of this school’s history of white supremacy.” According to Campus Reform, a right-wing site, the student government passed that resolution unanimously.

I don’t know what’s worse: these student demands to remove statues that not only honor great men, but remind us of history, or the pusillanimous administrators who bow to those demands. Northwestern President Morton Schapiro is a welcome exception, but after the students and African-American Studies Department castigated Schapiro’s hard-nosed response to defund-the-cops protestors, he’s showing signs of caving.

For those who think that all this madness will end when Biden is elected, I wouldn’t hold my breath. The students have had a taste of power, and they won’t stop until they’re running the asylum.