Skip to content
The other day I criticized James Lindsay—who’s done excellent work against the Illiberal Left and also coauthored the essential book Cynical Theories with Helen Pluckrose—for deciding to vote for Trump. His decision was, as far as I understand, a reaction to fulminating Wokeness, perhaps a considered response, but an ill-considered and maladaptive one. Others have criticized Lindsay’s view as well, one of them being Pluckrose herself, who, while arguing that voting for Trump as a concerned Leftist was a big mistake, was careful not to name her collaborator.

Now Pluckrose has apparently collected 14 critics of Social Justice Wokeness who second her view at Areo (she’s the editor of the site). And a stellar cast it is, too. I’ll put the names below, and perhaps a few excerpts, but they all say pretty much the same thing, though in different ways: DO NOT VOTE FOR TRUMP, even if you hate Wokeness or Critical Theory or Social Justice with capital letters. 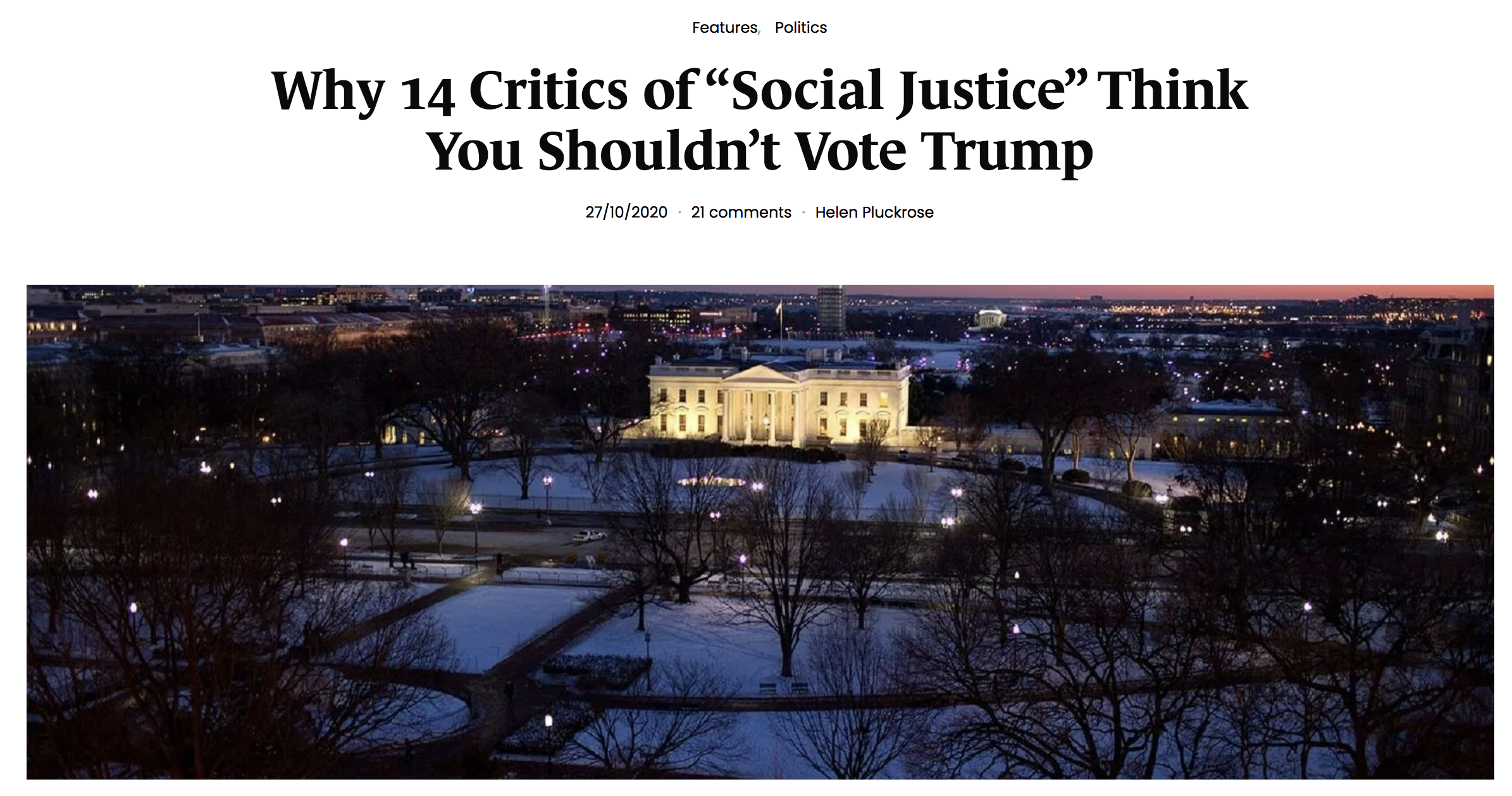 Participants (their words are indented, and for most of these I’ve used only excerpts):

We cannot push back against irrationalism and illiberalism on the left by embracing irrationalism and illiberalism on the right. We cannot beat the postmodern Social Justice and alternative ways of knowing of the left with the postmodern post-truth and alternative facts of the right. Trump is not the solution for anyone who values science and reason and wants to protect a liberal society that defends freedom of belief and speech and viewpoint diversity as well as rigorous scholarship and consistently ethical activism for genuine racial, gender & LGBT equality.

And if you think supporting Trump is in practice a tactical corrective to encroachments of the illiberal hard left, answer this question: have the encroachments gotten better or worse during the Trump years? We need an invigorated, robust and inclusive movement for rational, evidence-based, humanistic progress, not a deeper division between two versions of anti-intellectual authoritarianism.

A vote for Trump, despite his anti-Critical Race Theory bluster, is in fact a vote to empower the worst progressive excesses. A vote to strengthen the besieged center, however dissatisfying to either extreme, is the only way forward for Americans of good will searching for ways to overcome the crippling polarization that plagues us.

During the last four years, I’ve repeatedly critiqued instances of illiberalism and identitarianism on the left. On every occasion, my efforts to reach my fellow Americans and to persuade them to rein in excesses on the left was made more difficult and impeded by the fact that the leader of America’s right-leaning coalition is himself flagrantly illiberal and prone to indulging in white identity politics. President Trump seems to bring out the worst in people. I expect that once he leaves office, whether in 2021 or 2025, both the Republican and Democratic coalitions will improve.

. . . any president who tells white supremacists to stand by rather than stand down will never have the credibility to crush identity politics—no matter how much he claims to despise the critical race crowd. Let me repeat: in the jihad against wokeism, you’re free to cast your lot with Trump. And if you do, kindly ask yourself: are you in this crusade to solve the problem or to prolong it? If this mission didn’t exist, do you know who you’d be? Is it possible that these politics are the source of your identity?

If you expect all this to end in street brawling between rival political gangs, you’ll get that too. Donald Trump does his best to recruit a bully corps on his own side, but he’s an even better recruiter for the bullies on the other side.

At some point it stops making sense to ask who’s chasing whom: it’s the same carousel with the same horses. The only answer is to jump off altogether. Get a president who’s not like this.

For the better part of this last decade, I’ve been working to persuade others to uphold liberal values. Since the election of Donald Trump, this work has been considerably more difficult. Trump approaches the presidency like a TV show, stoking fires and picking fights. He and his supporters revel in his ability to trigger the left. Is it any surprise that it has worked?

. . . It is not clear how we can begin to repair the damage. But surely the first step must be to stop the man throwing kerosene at the flames.

Don’t vote for Trump just because you despise the increasing political correctness of the Democrats. Political correctness is a problem, but Trump is a worse one. He’s not even an authentic conservative. He only has one guiding principle, and it’s clear what that is.

While I take a far softer line on critical theory than many of my colleagues here, I can recognize that many people don’t like it. They associate it with academic wokism or radicalism and may well see it as a serious threat to liberal individualism and meritocracy. Some may even see postmodern radicalism as a threat to reason and science themselves. Fine. We can have those debates later. But there is no responsible liberal argument for voting in a wannabe despot who treats facts like an inconvenience and whose enablers claim that “truth isn’t truth.” Trump embodies all that is worst about the postmodern epoch and is far past his sell-by date.

Unlike many left of center people, I see wokeness as a serious problem. I’m very concerned about its takeover of much of the mainstream media and its grip on large segments of the Democratic Party. While I don’t think Joe Biden is an extremist, he certainly pays lip service to aspects of woke ideology, whether on systemic racism or transgender issues.

But to look to Trump for deliverance, as some opponents of the woke left are doing (again!), is a massive mistake. It’s not just that Trump is bad on other issues: he’s bad for the anti-woke cause, at least if you’re anti-woke because you support the classical liberal principles of individual autonomy, freedom of expression and reason.

The cure for rage and irrationality is reason and thoughtfulness. To believe that someone like Trump is the necessary response to the excesses of the left is to exchange one form of illiberal authoritarianism for another. It is also to believe that there are no alternatives and that it is impossible for reasonable people to emerge as the dominant voice in a democracy. This is nothing more than sullen defeatism and I will never embrace the idea that the only answer to extremism is to poison ourselves with some political isomer of the same extremism. The center exists and it is healthier than we think it is—but it will only prevail over time if we have the courage to defend it.

Wokeness spreads in Donald Trump’s wake. For every action he takes, there is an equal and opposite reaction, and if Donald Trump wins the election, this will be proof positive to many of today’s more illiberal activists that the United States is, at heart, too racist, too sexist, too problematic to remain intact. And their reaction to that will be to burn the whole thing down. Well, I don’t want to burn the whole thing down. I want progress—real progress. I want the US to live up to its promises, which is not possible under a Trump administration. If he wins, all we will get is more extremism on both sides, and I fear for the future of our nation, and for liberalism itself, should that come to pass. So I’m a single issue voter this time around, and that issue is getting Donald Trump out of office.

To combat wokeism, we need to understand its appeal and propose better values to replace it. Trump is incapable of the first and unwilling to do the second. Four more years of Trump will only make this fight harder.

Let me be clear: I’m just as worried about the excesses of Critical Social Justice as you are.  And I applaud Helen Pluckrose and Jim Lindsay for having written a book, Cynical Theories, that calmly dissects the anti-rational and anti-liberal ideology underlying it and argues, once again, for liberal values such as respect for viewpoint diversity and honest debate, and respect for evidence, reason and science. But do you seriously think that Trump gives a f*** about any of these values?  And do you seriously think that four more years of Trump will help bring back liberal values on either left or right? On the contrary, the illiberal excesses of some sectors of the left were one factor (among many others) in driving the backlash that brought Trump to power; and the illiberal excesses of Trump and his Republican enablers—who stoke division and tribalism as a political strategy—are fueling illiberalism on the left.

To be honest, Biden wasn’t my preferred Democratic candidate; my sympathies were, rather, with Elizabeth Warren and Bernie Sanders. But maybe four years of boring moderate Biden is just what our country needs right now: to restore some modicum of decency and rationality so that we can, in the future, debate serenely and rationally which economic, political and environmental reforms might be beneficial to our nation and our world.

Please help that happen, and vote for Biden.

Note that many of the critics argue that Trump has exacerbated Wokeism, based on the fact that it’s increased since 2016. While that might be true, we must remember that we have no control experiment: Wokeism might well have increased without Trump, though perhaps not as much. (Remember, it’s increased in Canada, too, and the PM there is not a Trump).

I don’t think that getting rid of Trump is a particularly good way to get rid of Wokeism under the assumption that he inspired most of it, nor am I convinced that Biden is the cure. We need to get rid of Trump because he’s continuously degraded American democracy and truth with his authoritarianism, because he’s unhinged and unstable, and because he’s continued to divide the American people, as well as having lied repeatedly and exacerbated the pandemic.  He is a godawful President (and person), and an embarrassment to the country.

Wokeism will persist even when Biden’s elected; in fact, I can’t imagine it decreasing palpably. Do you think the New York Times will suddenly become respectable again, or college campuses settle down during a Biden presidency? I doubt it. We need to keep fighting it on its own terms: demanding evidence, refusing to take anecdotes or lived experience for data, and standing up for reason even under the possibility that you’ll be called a bigot.

But yes, the writers are correct in their main claim: voting for Trump because you think his election will cure Wokeism is a futile effort. And Wokeism, right now, is a long way from the biggest problems that face America.