This letter in Areo (click on screenshot) gets the point of the Harper’s letter in a way that many outraged people and offended intellectuals didn’t. The author, who asserts that he’s a “nobody”, isn’t really: his Areo bio says this:

Angel Eduardo is writer, musician, photographer, and designer in New York City. He has been published in The Ocean State Review, The Caribbean Writer, and Mr. Beller’s Neighborhood, among other publications. See more of his work at angeleduardo.com.

But never mind who he is.  His point is that, as Steve Pinker mentioned, the letter wasn’t there to protect the speech and hegemony of the many intellectuals who signed the letter; it was to call attention to a culture that demonizes and, worse, injures the livelihoods of “regular” people who committed ideological transgressions, usually on the Internet. This isn’t in the interest of debate or of producing “counterspeech”, but in the interest of hurting your opponent.

Eduardo now has put his career in danger, for in the Areo letter he says that while he believes in the principles of Black Lives Matter, he often finds their rhetoric “confused, dishonest, and based on misinterpretations of the data.”  Also, while supporting trans people, he says “I cannot deny my own understanding of the science behind biological sex.”  Those two statements—or even one of them—are sufficient to stuff him into the meat grinder of cancel culture. Now, he says, A target is on his back, but he had sufficient courage to write the article, and to say this:

That’s the fulcrum on which the Harper’s letter turns: I could be wrong about everything, and I am willing to hear the reasons why, but I must be given the chance to be wrong. I must be able to not only express my opinions, but to know that my life won’t crumble around me because I happen to be in disagreement with the crowd. We must grant one another compassion and the benefit of the doubt, despite our basest instincts and the social media platforms that cynically incentivize them. I’ve been wrong nearly every day of my life, and there hasn’t been one instance in which I didn’t become a better person for having learned through compassionate correction. If I’d been afraid to speak or act, or if I’d been met with righteous anger instead, I might have never learned at all.

There’s more, but you can read it for yourself. I want instead to highlight one of the links Eduardo gives below:

In the wake of the Harper’s letter, I’ve witnessed flabbergasting displays of casuistry. Critics have attacked the motives and character of certain signatories, as though accusations of hypocrisy—whether justified or not—could invalidate the principles within the letter itself. Many have argued that the cancel culture the letter decries doesn’t even exist, despite seemingly unending examples.

Of course I had to see the link, for many critics of the Harper’s letter beefed about the nonexistence of cancel culture. After all, they wrote uncomprehendingly, all those people who signed the letter didn’t get canceled; they were just defending their right to oppress others who—the beefers claimed—couldn’t speak up because they were marginalized. (The idea that marginalized people have no voice cannot be supported given the outcry and changes following the murder of George Floyd.)

Anyway, the author of the list, who runs the EverythingOppresses Twitter site, put up ten examples of “cancel culture” (non-famous people having their lives and careers damaged, mostly through firings), and then offered to give ten other examples for each 1,000 followers he/she accrued—up to 150. There are now about 7500 followers, and at the site below (click on screenshot), you can see the list. 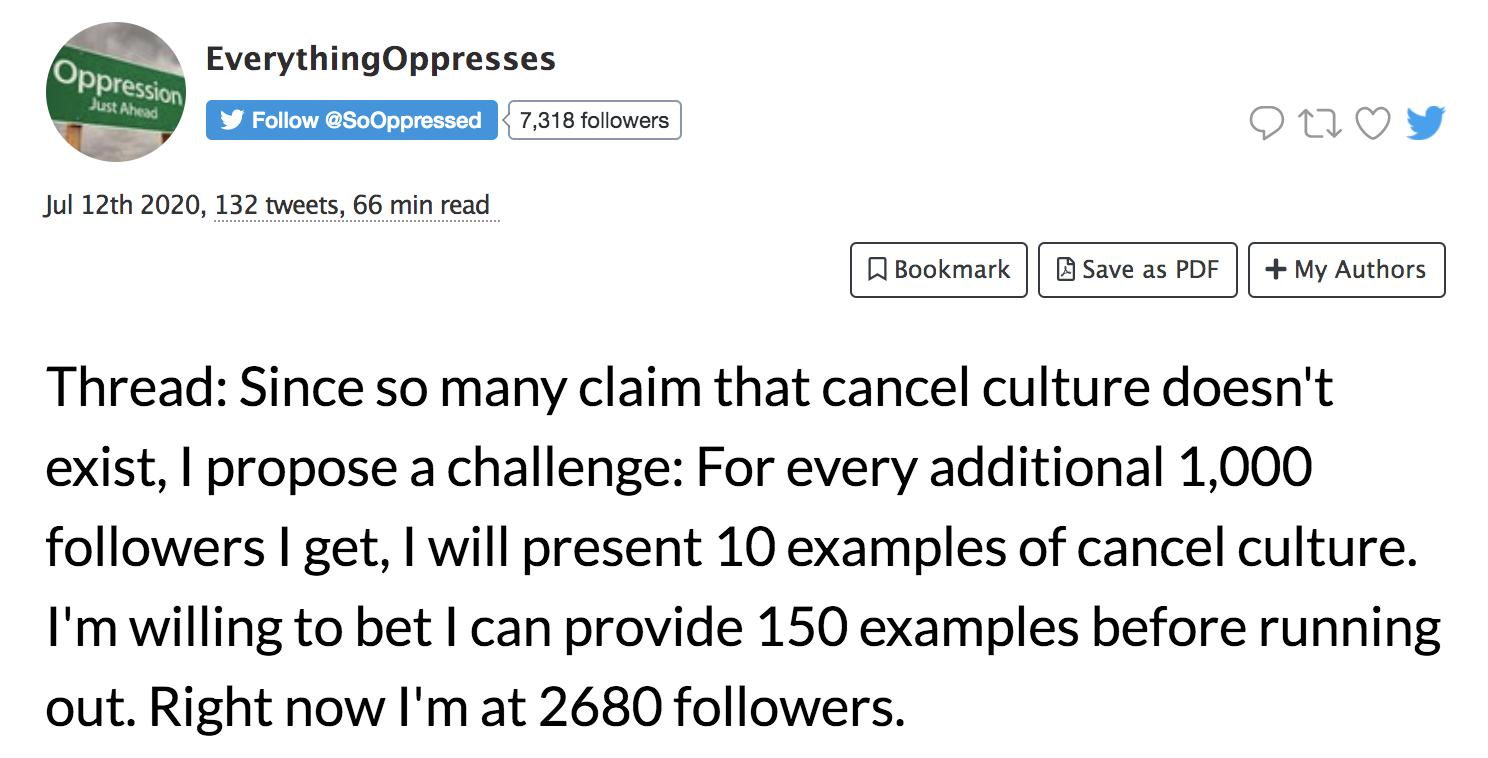 There are now 101 examples, and I’ve looked at them all. While some don’t really fill the bill (semi-famous people simply being attacked, with calls for them to be fired), and other folks weren’t really fired but were piled on by social-media mobs, most of them do count as real examples of “cancel culture.” Not only were people’s businesses wrecked and their careers damaged, or they got fired, but I can’t imagine any of this happening 30 years ago. The closest example I can think of in our time is the red-baiting that took place during the McCarthy era. But even that wasn’t comparable because the career-wrecking was mostly done by the government and Congress, not by private citizens.

You’re already familiar with many of these examples if you’ve read this site, but I’ll give a few, and if you click on the screenshots you can read the evidence. Some of them are truly horrific examples of mob mentality. Yes, you can be attacked by the outraged if you criticize the MeToo movement, Black Lives Matter, or if you say something that, however obliquely, can be interpreted as racist, but counterspeech is simply a demonstration of free speech. Pushback on social media is often distressing, but I can’t say I oppose it. What makes these examples odious are the blatant attempts to ruin people’s livelihoods by communicating Ideological Malfeasance to people’s bosses. And yes, boycotts aren’t illegal, but they can be misguided and overblown, as many in the list are.

Here are a few examples (again, click on screenshots to go to the relevant news article). Remember the Burrito Truck Cancellation?

I wrote about this one, too:

One link here to represent all four cases: 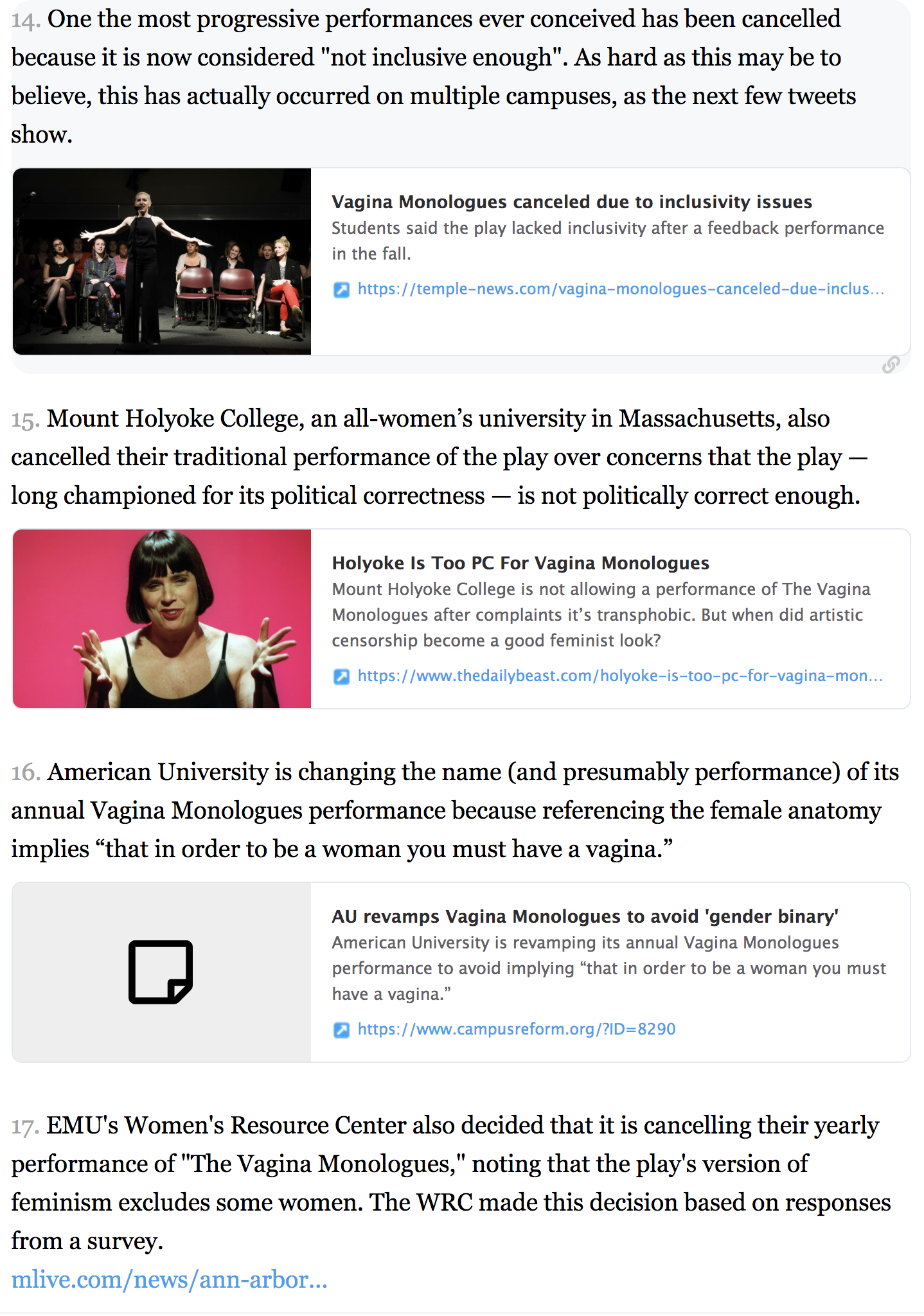 You know of this incident: 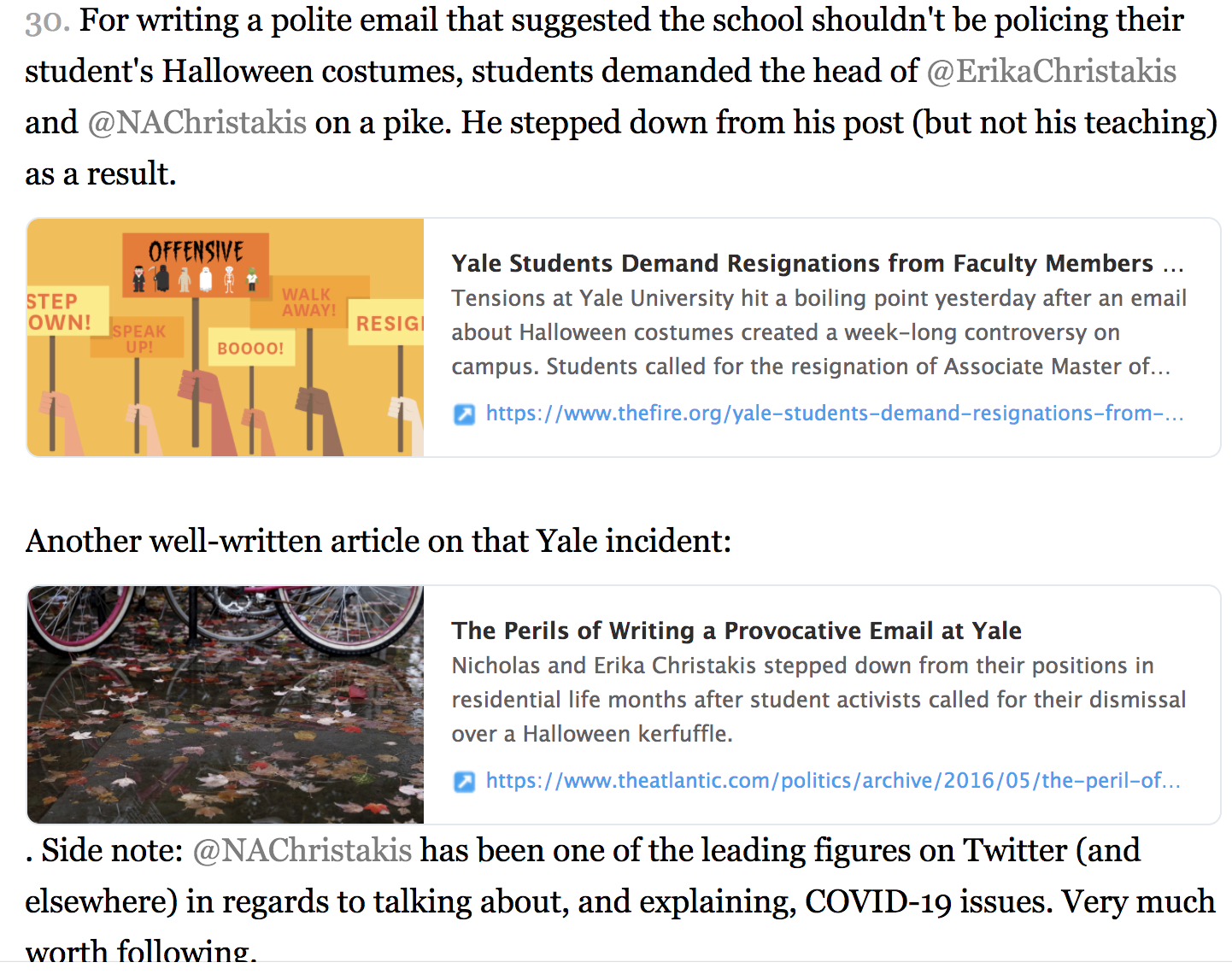 Although there’s controversy about why Google fired James Damore, it seems pretty clear it was his response to the “diversity memo” that did him in. Regardless of whether he conformed to “received wisdom,” he shouldn’t have been fired:

Young adult fiction is a hotbed of Cancel Culture activity. The author gives a number of examples, but here’s an overview: 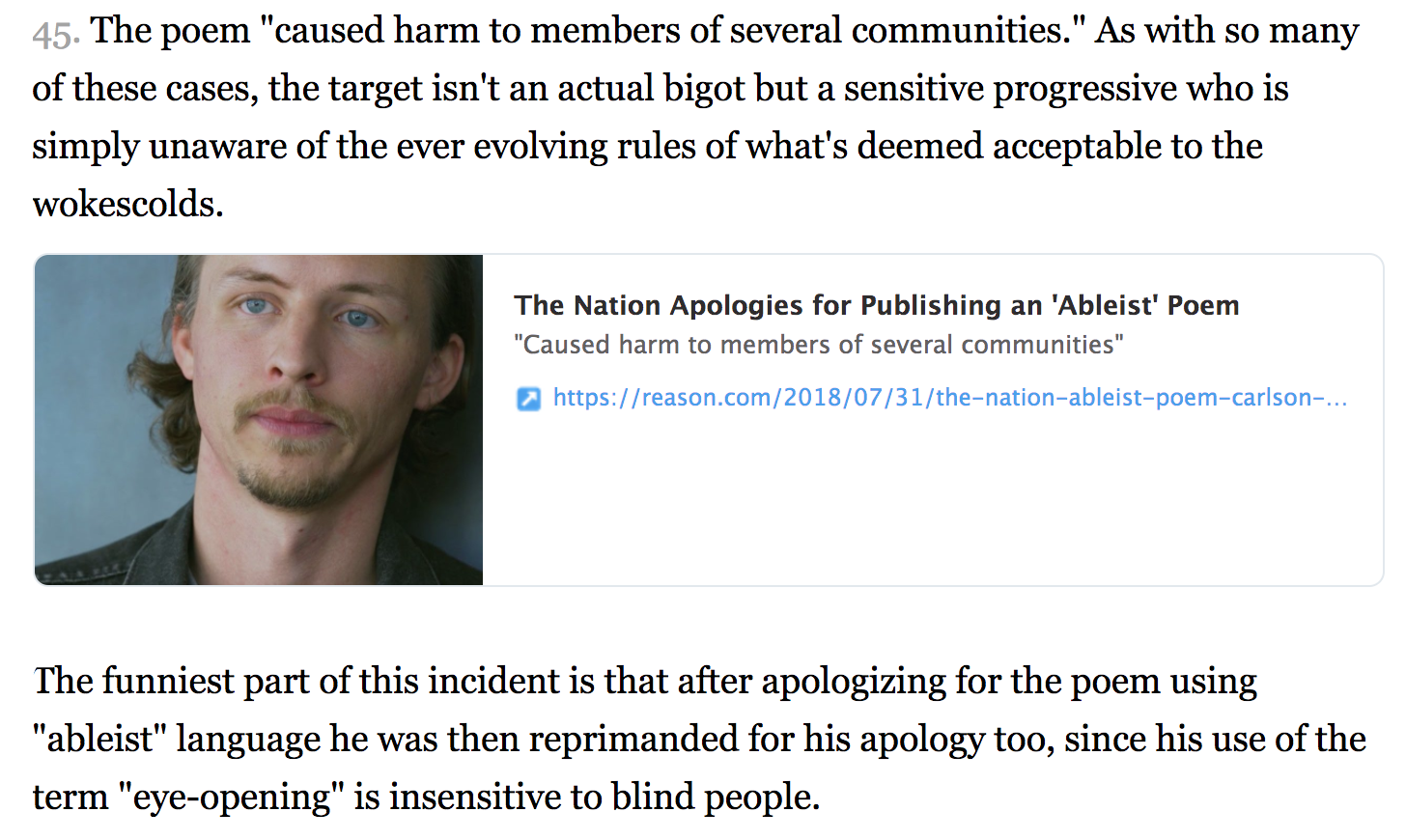 Surprisingly, one of the most fertile hunting grounds for the Offense Police is the “knitting culture”: social-media websites connecting those who knit. Here’s one ludicrous example of hounding after an innocuous statement (another example is here): 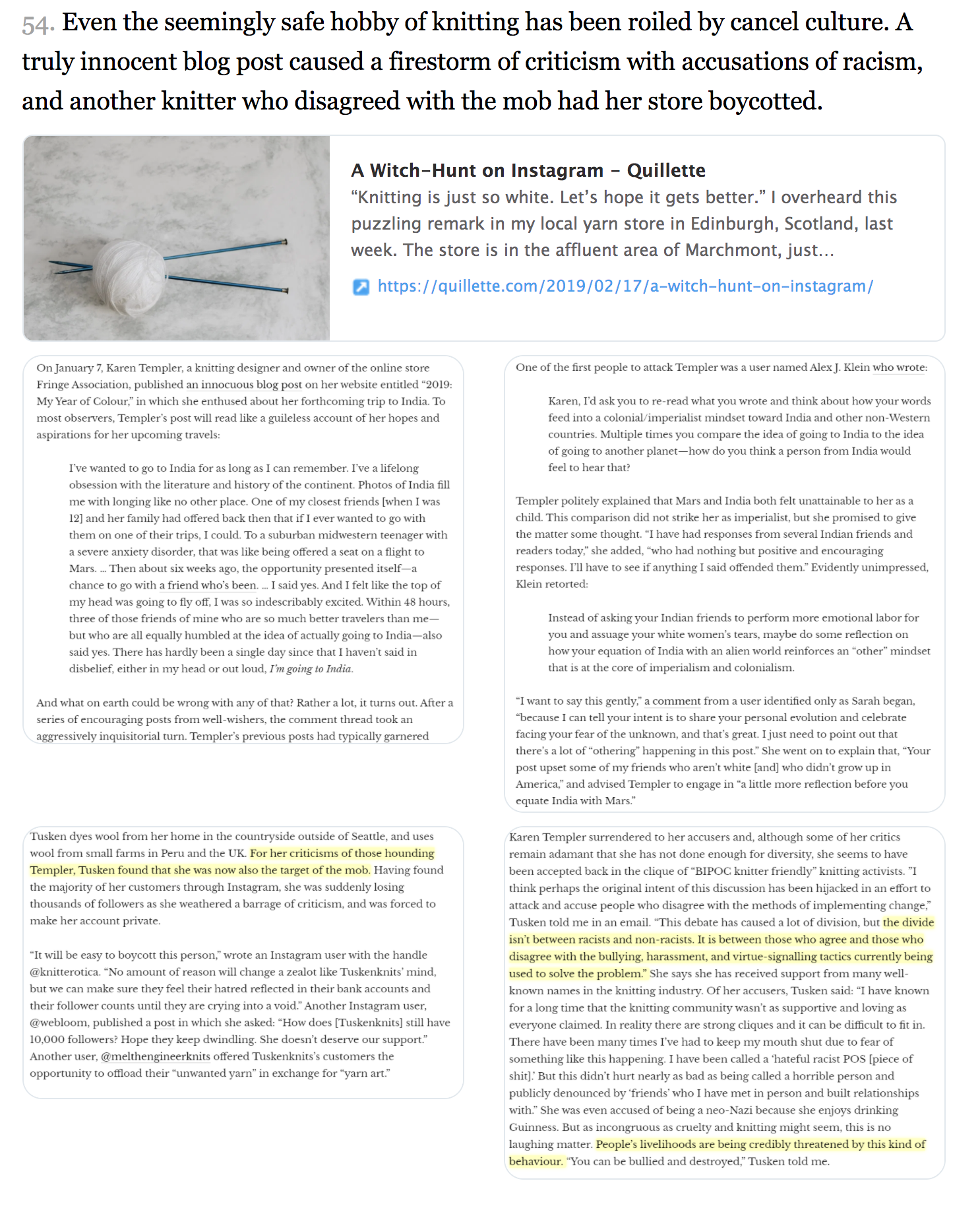 And you surely remember the Gibson’s Bakery incident, in which Oberlin College decided to rouse its students by accusing the bakery of racism when in fact there was no racism in evidence (the bakery won a huge judgement against Oberlin, which behaved despicably). There are two screenshots with separate links: 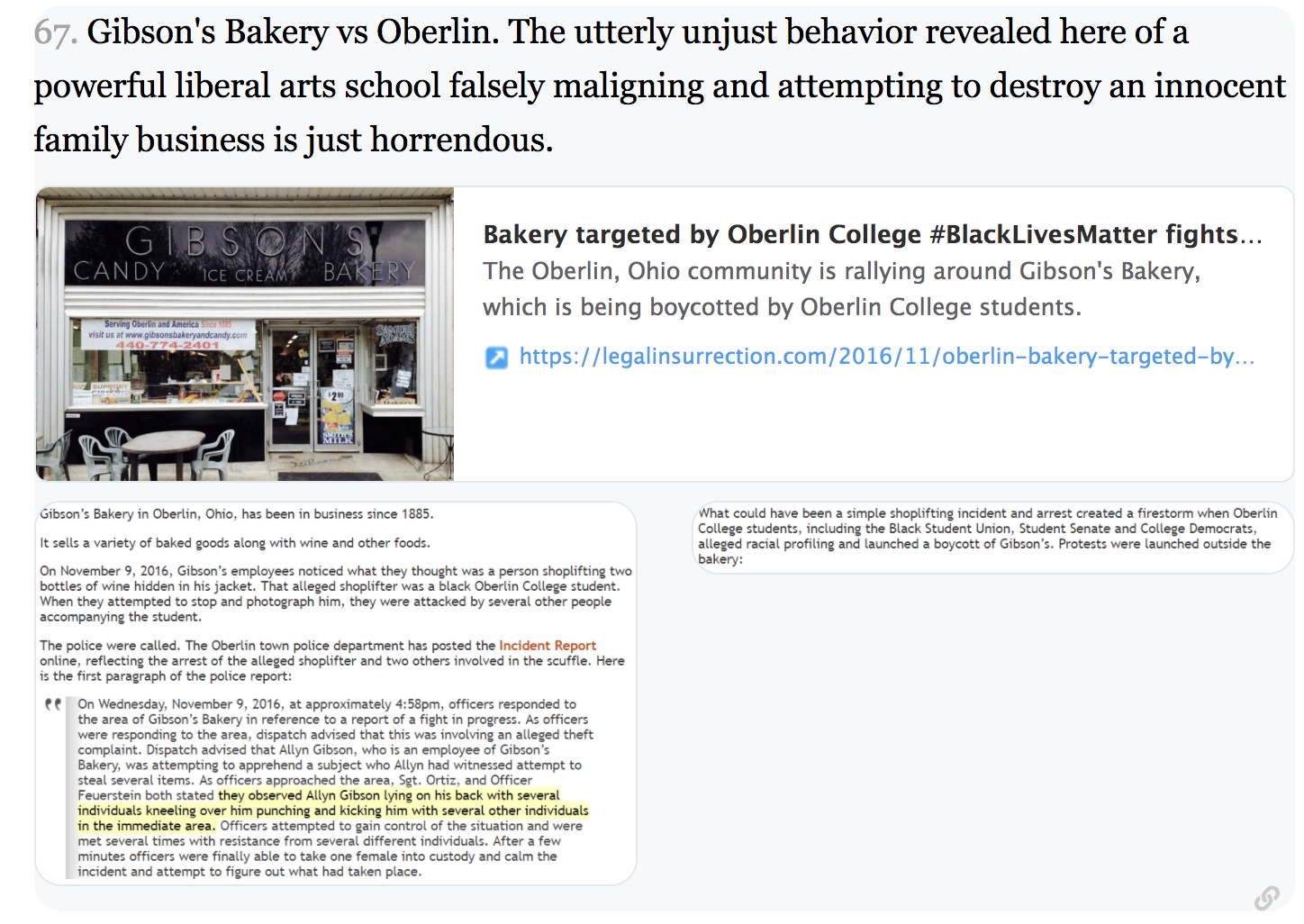 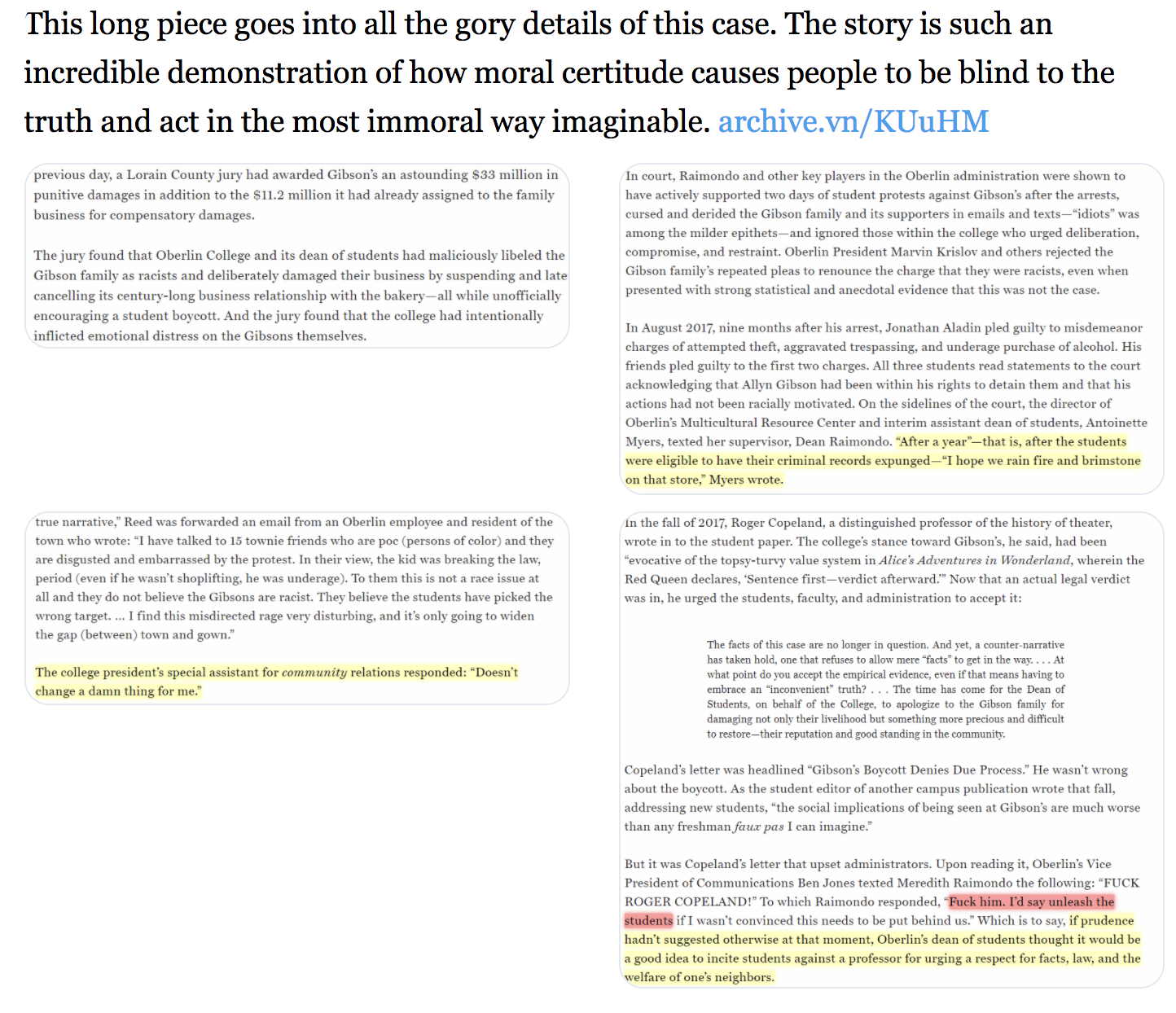 Don’t forget how Bret Weinstein and Heather Heying were hounded out of The Evergreen State College (NYT story by Bari Weiss): 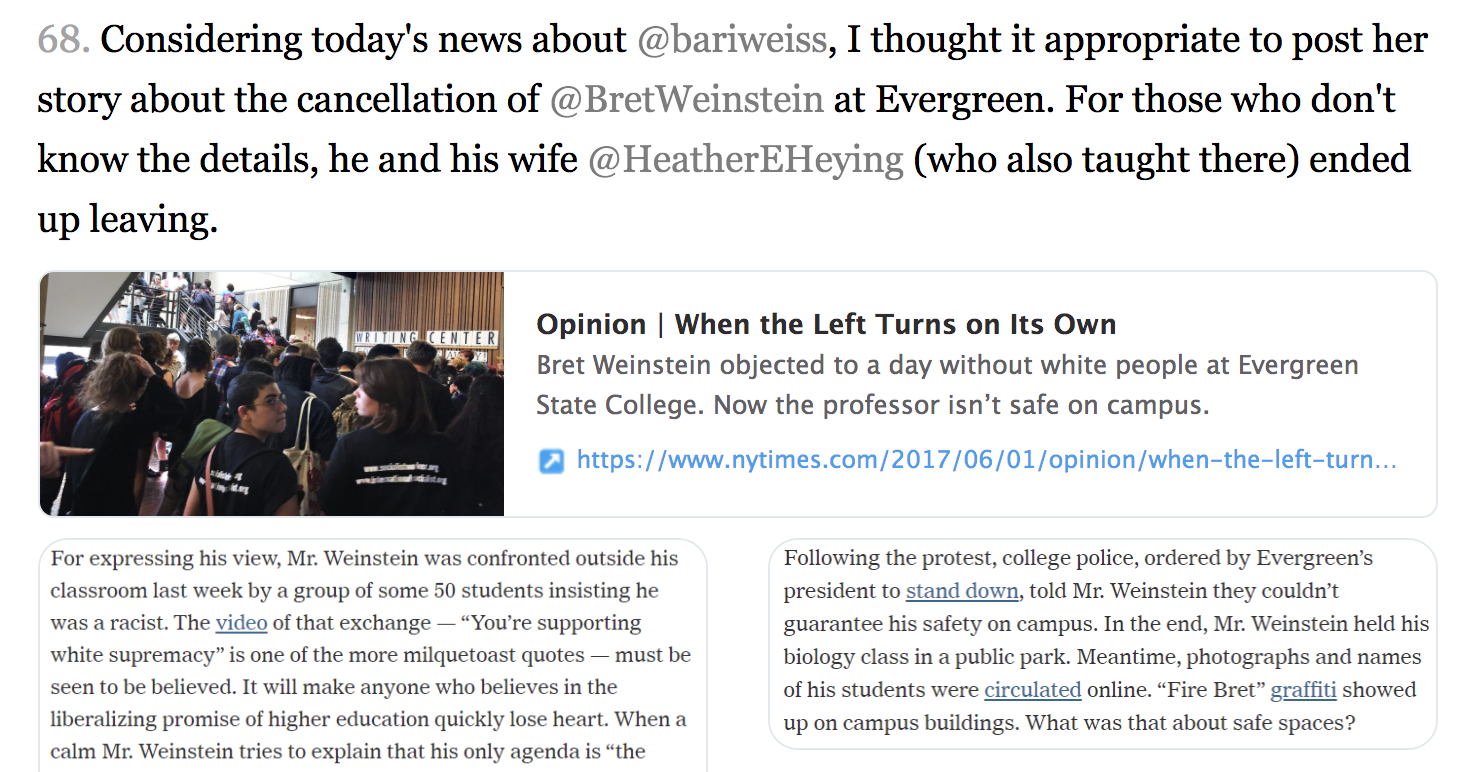 Are ten examples enough? (Remember, there are over a hundred.) Let’s make it an even dozen. The next one is particularly odious, and you may not know of it: 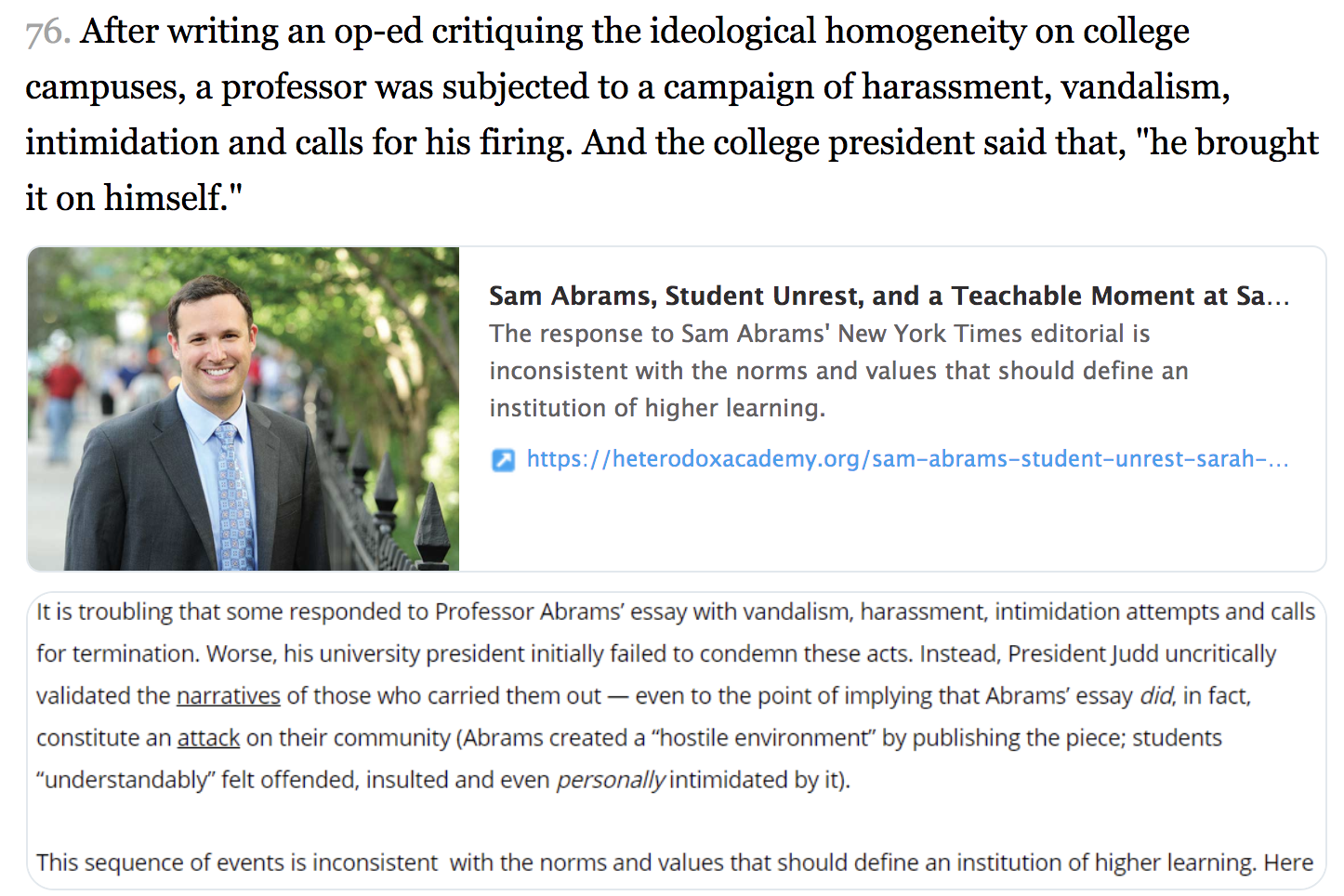 To finish off, let’s not forget how Harvard Law Professor Ronald Sullivan was kicked out as head of an undergraduate residential house for having the temerity to join Harvey Weinstein’s defense team. No matter than Sullivan had done a lot in the past for marginalized students; his presence was making students at Winthrop House feel “unsafe” (a word that should raise a red flag):

These, and most of the rest of the examples, clearly show that people’s lives have been damaged or even ruined by social-justice mobs not even offering counterspeech (they often take their positions as un-debatable), but simply baying instead for people’s jobs.

I don’t have a strategy to counteract this kind of climate; all I can suggest is that we stand up against it every time we see it. Given that the liberal media and many other powerful positions are now occupied by woke students who imbibed their ideology in woke colleges like Oberlin and Harvard, it’s going to be a long battle.

91 thoughts on “Think “cancel culture” is a fabrication? Think again.”