Journalism lost two valuable voices last week: Bari Weiss and Andrew Sullivan. Both will, I’m sure, find new homes, and Andrew has already rebuilt his home—a new version of his old blog The Daily Dish.  Weiss wasn’t fired from the New York Times; she quit. According to her letter of resignation, it was because of the disapprobation and harassment by her colleagues, as well as the paper’s well-known climate of ideological intolerance. While some have accused Weiss of whining about her situation, her description of her “hostile work environment.” occupies but one scant paragraph among eighteen. The rest is devoted to the paper’s intolerance of even a centrist political attitude among op-ed writers. I’m curious to know where Bari will wind up (it won’t be the Washington Post, that’s for sure!)—but perhaps she could find a home in a place like The Atlantic.

What happened to Sullivan is not so clear; read his farewell column in New York Magazine by clicking on the screenshot below. 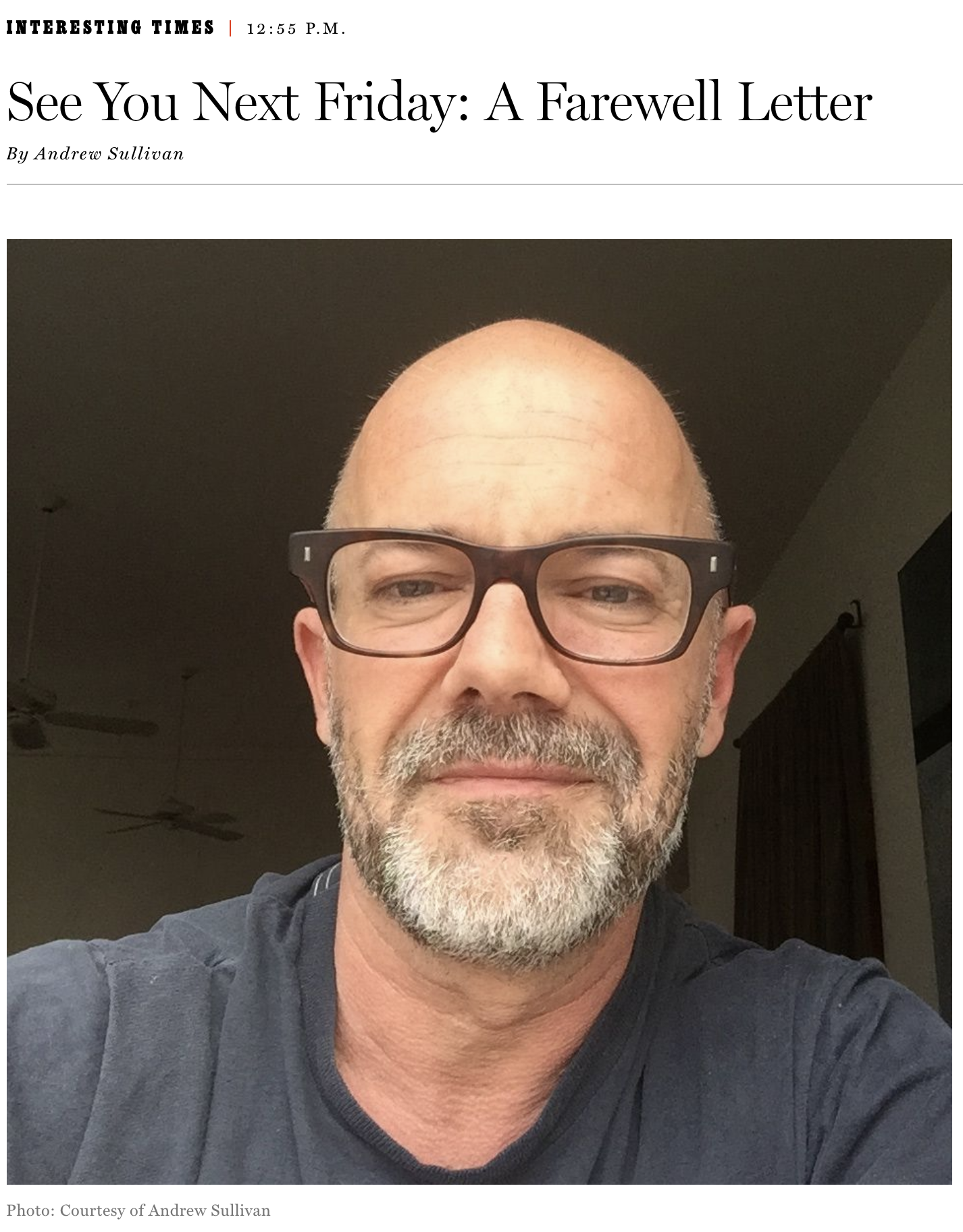 Sullivan doesn’t say whether he left, was pushed out, or was fired outright (this omission is probably deliberate), but his departure clearly had something to do with the magazine not running one of his columns a few weeks ago. And a few words in his column suggest that maybe he was shown the door:

What has happened, I think, is relatively simple: A critical mass of the staff and management at New York Magazine and Vox Media no longer want to associate with me, and, in a time of ever tightening budgets, I’m a luxury item they don’t want to afford. And that’s entirely their prerogative. They seem to believe, and this is increasingly the orthodoxy in mainstream media, that any writer not actively committed to critical theory in questions of race, gender, sexual orientation, and gender identity is actively, physically harming co-workers merely by existing in the same virtual space. Actually attacking, and even mocking, critical theory’s ideas and methods, as I have done continually in this space, is therefore out of sync with the values of Vox Media. That, to the best of my understanding, is why I’m out of here.

Two years ago, I wrote that we all live on campus now. That is an understatement. In academia, a tiny fraction of professors and administrators have not yet bent the knee to the woke program [JAC: I’m one!] — and those few left are being purged. The latest study of Harvard University faculty, for example, finds that only 1.46 percent call themselves conservative. But that’s probably higher than the proportion of journalists who call themselves conservative at the New York Times or CNN or New York Magazine. And maybe it’s worth pointing out that “conservative” in my case means that I have passionately opposed Donald J. Trump and pioneered marriage equality, that I support legalized drugs, criminal-justice reform, more redistribution of wealth, aggressive action against climate change, police reform, a realist foreign policy, and laws to protect transgender people from discrimination. I was one of the first journalists in established media to come out. I was a major and early supporter of Barack Obama. I intend to vote for Biden in November.

It seems to me that if this conservatism is so foul that many of my peers are embarrassed to be working at the same magazine, then I have no idea what version of conservatism could ever be tolerated.

I’ve long called out all three major publications with “New York” in the title”—the New York Times, the New Yorker, and New York Magazine—for their fulminating and irritating wokeness. Clearly Sullivan is a victim of this, as was Bari Weiss. Their brand of politics, refusing to truckle to “progressive” Leftism or to toe the Line of Wokeness, is not welcomed. And all these publications will be the poorer for losing these writers. Truth be told, how many of us want to read the same, predictable take on issues over and over again? Yes, many American do, but many Americans don’t want to exercise their neurons.

Sullivan, I’m sure, had already formulated his exist strategy at least a few weeks ago when his column was censored, and he makes it clear in this last piece: he’s reviving his blog The Dish, which will be subscription-only but will be free for a few weeks. I never read The Dish before (now to be called The Weekly Dish), but I’ve signed up for the free sample, and, if I like what I read, I’ll pay to subscribe. Here’s what excited Sullivan about returning to his own site:

I miss a readership that truly was eclectic — left, liberal, centrist, right, reactionary — and that loved to be challenged by me and by each other. I miss just the sheer fun that used to be a part of being a hack before all these dreadfully earnest, humor-free puritans took over the press: jokes, window views, silly videos, contests, puns, rickrolls, and so on. The most popular feature we ever ran was completely apolitical — The View From Your Window contest. It was as simple and humanizing as the current web is so fraught and dehumanizing. And in this era of COVID-19 isolation and despair, the need for a humane, tolerant, yet provocative and interesting, community is more urgent than ever.

And here’s what he envisions:

The initial basic formula — which, as with all things Dish, will no doubt evolve — is the following: this three-part column, with perhaps a couple of added short posts or features (I probably won’t be able to resist); a serious dissent section, where I can air real disagreement with my column, and engage with it constructively and civilly; a podcast, which I’ve long wanted to do, but never found a way to fit in; and yes, reader window views again, and the return of The View From Your Window contest. I’m able to do all this because Chris Bodenner, the guru of the Dish in-box and master of the Window View contest, is coming back to join me. He’ll select the dissents, as he long did, in ways that will put me on the spot.

Before leaving, and telling us how to subscribe, Sullivan gets in a final swipe at the illiberal liberal media:

If the mainstream media will not host a diversity of opinion, or puts the “moral clarity” of some self-appointed saints before the goal of objectivity in reporting, if it treats writers as mere avatars for their race and gender or gender identity, rather than as unique individuals whose identity is largely irrelevant, then the nonmainstream needs to pick up the slack. What I hope to do at the Weekly Dish is to champion those younger writers who are increasingly shut out of the Establishment, to promote their blogs, articles, and podcasts, to link to them, and encourage them. I want to show them that they have a future in the American discourse. Instead of merely diagnosing the problem of illiberalism, I want to try to be part of the solution.

You can get on the mailing list, and see the first couple of issues for free, by going to the site below (click on screenshot first, and then click on “none” if you just want a sample, or on the other alternatives if you’re ready to pay): 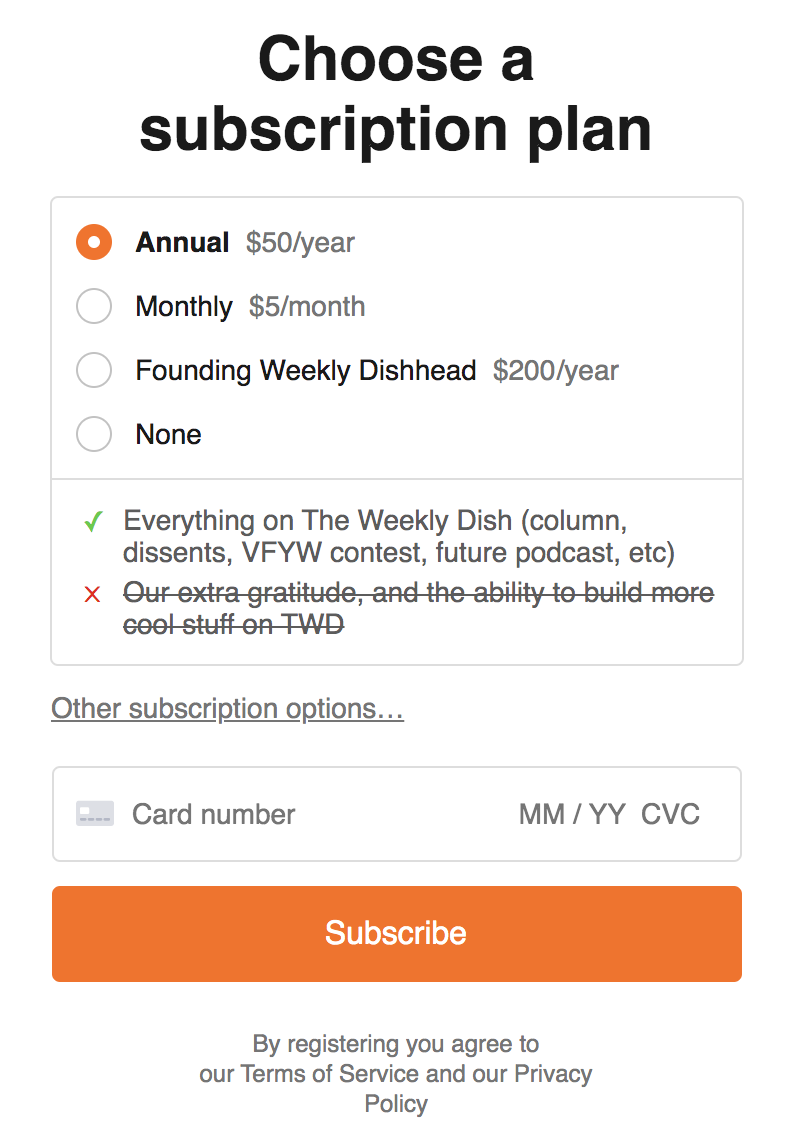 I didn’t realize that this site was so lucrative in its earlier incarnation, pulling in about a million bucks a year before expenses (there were several salaries to pay), with 30,000 subscribers. Crikey, that’s a lot of dosh! But if readers are willing to pay for what you write, then I can’t begrudge him the money.