Emory University in Atlanta, Georgia reports that, at the urging of students and by a big majority of faculty, it has instituted a general education requirement that “focuses specifically on the histories and experiences of people of color.” This will be a required course for all students, though there may be different courses in different departments that meet the requirements approved the College Senate (the resolution to create this course was passed by 73% of voting faculty). You can read about this in the article below, from Emory’s independent student newspaper (click on screenshot): 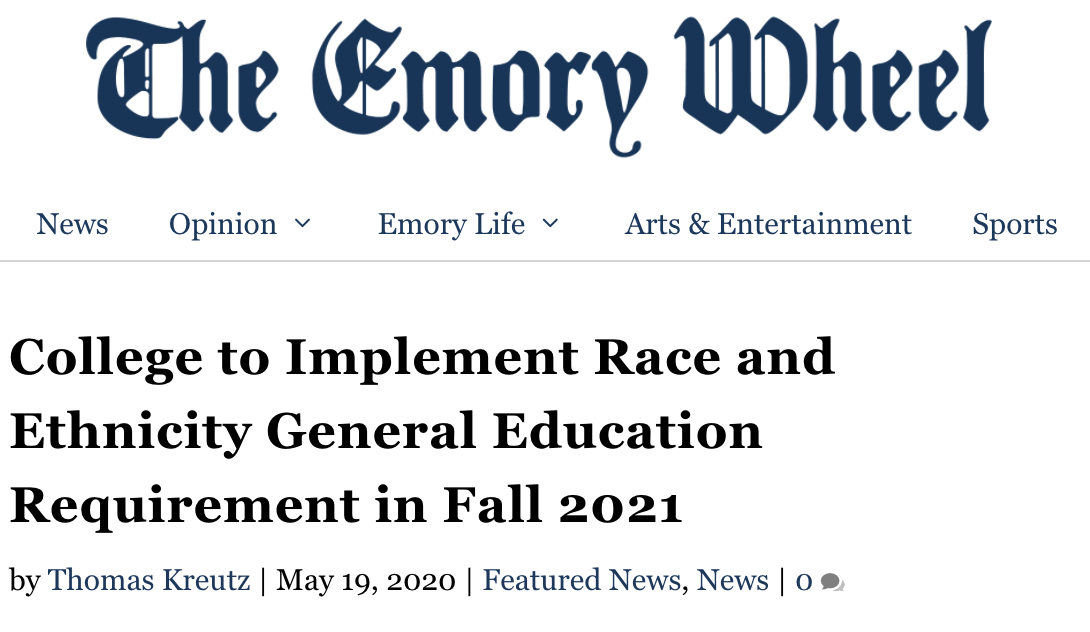 The Wheel notes that there were predecessor courses in the 1990s about diversity, though I suspect from the description of those in the proposal that these were far less political, focusing mostly on the different groups that made up America: not only blacks, but Native Americans, Jews, Italians, Asians, Irish, Germans, and so on. (This is just my guess, but I remember such courses when I was a child. But of course those courses downplayed ethnic and nationalistic tensions.)  Now, of course, the national diversity of People of No Color will be neglected, though we all know that the Irish, Jews, and Italians were also subject to discrimination in our history. As were the poor.

The idea for these courses arose after the group Black Students at Emory demanded such a course in 2015:

The proposal stated the 2015 Black Students at Emory demands occurred in light of “sudden political tumult that had occurred in November of that year,” and was also a “reflection of the continued and intensified alienation and precarity that black students and students of color have experienced on Emory’s campus.”

The demands brought a “conversation already ongoing within the faculty” to the fore and was the driving force behind the proposal, the proposal reads.

In fact, I have no objection to a course outlining the way America became a “melting pot,” nor how the different groups met diverse obstacles to acceptance. What I object to in this course is that it’s specifically about groups that have pigmented skin (presumably including those from the Middle East, who were historically considered Caucasian), and, especially, that it seems designed to push an ideological point of view—that of Critical Race Theory. Will there be freedom of speech in this course? Will people be able to question affirmative action or the idea of reparations? I doubt it.

And of course there are the issues of class differences in America, which are profound and pervasive. Any kind of social issues beyond discrimination based on race is neglected, and I suspect there are no required courses for those. But I object to any course that tries to force students think in a certain way, and to discourage their exploring thinking in other ways. If you think these courses welcome diverse opinions, you think wrong.

For example, here is a list of what must be the objectives of the new courses taken from the proposal passed by the Emory Faculty:

This seems to me more like teaching and forcing adherence to a certain point of view (for example, that of the New York Times’s 1619 Project), than an “educational” experience. In other words, you learn to think in a certain way and to adopt certain viewpoints—those of the Authoritarian Left—rather than to absorb information and discuss it openly. These seem more to me to be thinking objectives rather than “learning objectives”. Critical thinking won’t be especially prized. Note the emphasis on intersectionality and respectful communication, the latter being a worthwhile goal but sometimes contravened by valuable and necessary free speech (i.e., discussions of affirmative action).

UPDATE: In a comment below, reader Historian notes that the article is 11 years old (my bad for not noticing the date), and a FIRE update shows that Emory gets green lights (the “best” rating) for most of its free-expression policies.

Indeed, as this article from the Foundation for Individual Rights in Education (FIRE) suggests, Emory is not particularly interested in diversity of thought or speech. This is one of several articles in which FIRE evaluates the commitment to free expression of the U.S. News & World Report list of America’s 25 best schools (click on screenshot). However it gets low ratings (“D” and “C” respectively for due process for non-sexual misconduct and sexual misconduct respectively). So ignore most of what is written below the following headline and pay attention to the material above.

FIRE has given Emory its worst rating for free speech—a “red light” rating, for the following reasons:

There are other objectionable policies of Emory as well.  All in all, abrogation of free speech nearly always goes hand in hand with ideologically-based courses such as the one above, for both are premised on offending as few people as possible. And that strategy is directly inimical to the way education should work.