How do you feel about some of our non-animal relatives today? Reader Leo Glenn in Pennsylvania favors us with some plant photos as well as a variety of animal groups, including amphibians felids. His captions are indented:

It’s been a while since I’ve contributed wildlife photos. With everyone on lockdown, I recently shared some “virtual walks” on our property with my Facebook friends and thought your readers might also enjoy seeing some of the photos.

We own seven acres of mostly wooded land in western Pennsylvania. Fifty-eight percent of our state’s land area is forest, around 16.9 million acres, fitting for a a state whose name means Penn’s Woods. But by the turn of the twentieth century, the majority of Pennsylvania’s woodlands had been clear-cut to feed the burgeoning timber industry and to make way for over 120,000 family farms (only a fraction of which still survive), leaving only a few tiny, protected patches of old-growth forest. Forests have been allowed to return, but they are mostly managed as cash crops rather than habitat (97% of Pennsylvania’s forested land is classified as timberland) and bear little resemblance to the deep, dark, old growth forests that once covered much of the state.

Today’s Penn’s Woods are mostly young, open woodlands, heavily browsed by white-tailed deer, frequently timbered, and plagued with many invasive species, showing the signs and scars of centuries of mixed management. Evidence that our little woods was once farmland remains in the piles and lines of stones that still mark what were once the boundaries of fields. There are so many invasive species—multiflora rose, bush honeysuckle, garlic mustard, Canada thistle, Japanese barberry—that it’s disheartening sometimes to walk here and imagine what it must once have looked like. Previous owners timbered our land 20-30 years ago and also ran cattle on the property, which further impacted habitat and the relatively few native species that remain. Nevertheless, we have tried to be good stewards during our time as caretakers of this patch of earth, reducing invasives and restoring diversity where we can, and otherwise leaving the land, as much as possible, to its own devices. On my walks, I try to focus on the beauty, and photograph what catches my eye.

Mayapple (Podophyllum peltatum). Another common name of this species is American Mandrake, as the roots were once thought to resemble the Old World mandrake plant (Mandragora sp.) which was believed to have magical properties. 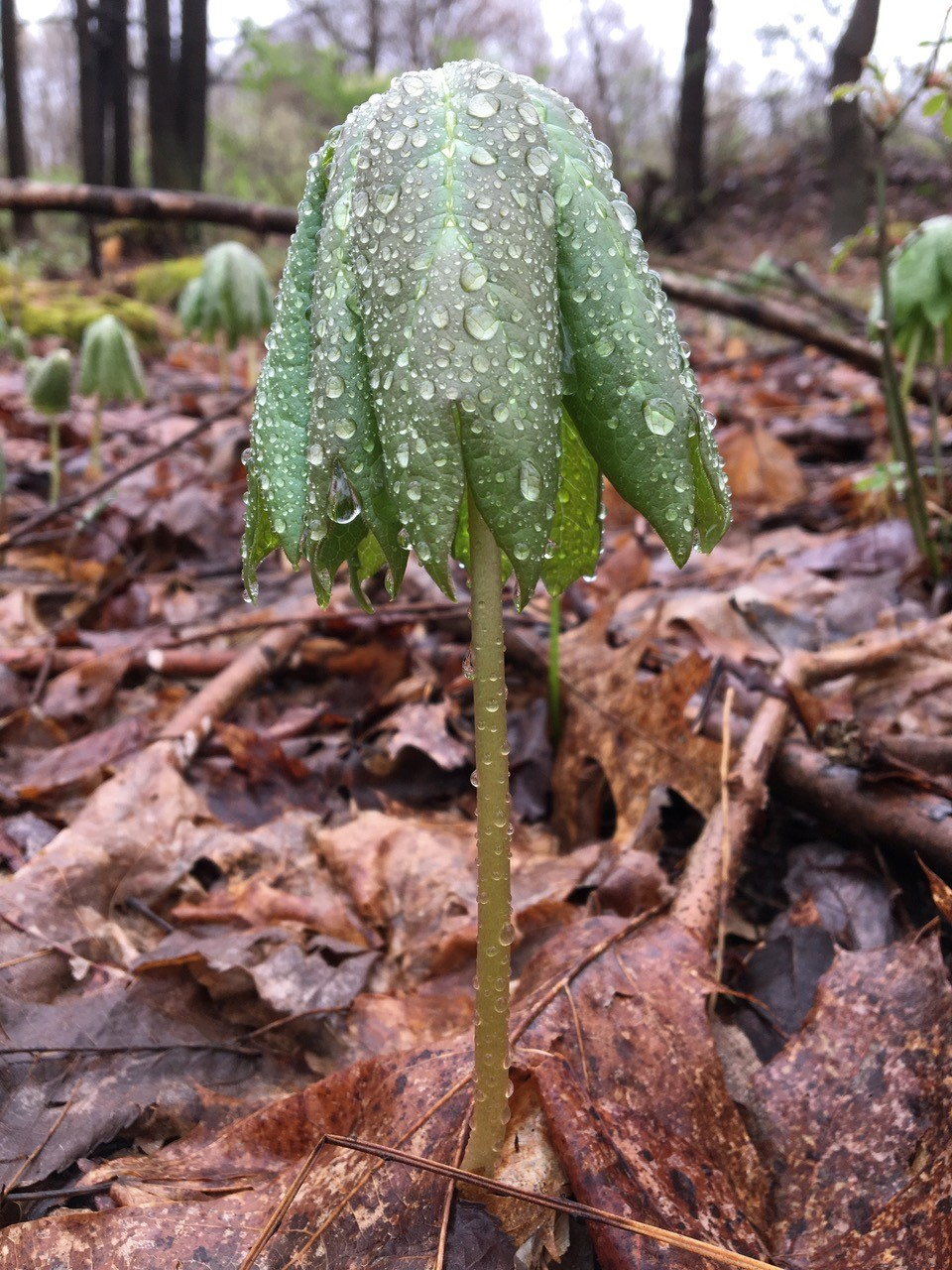 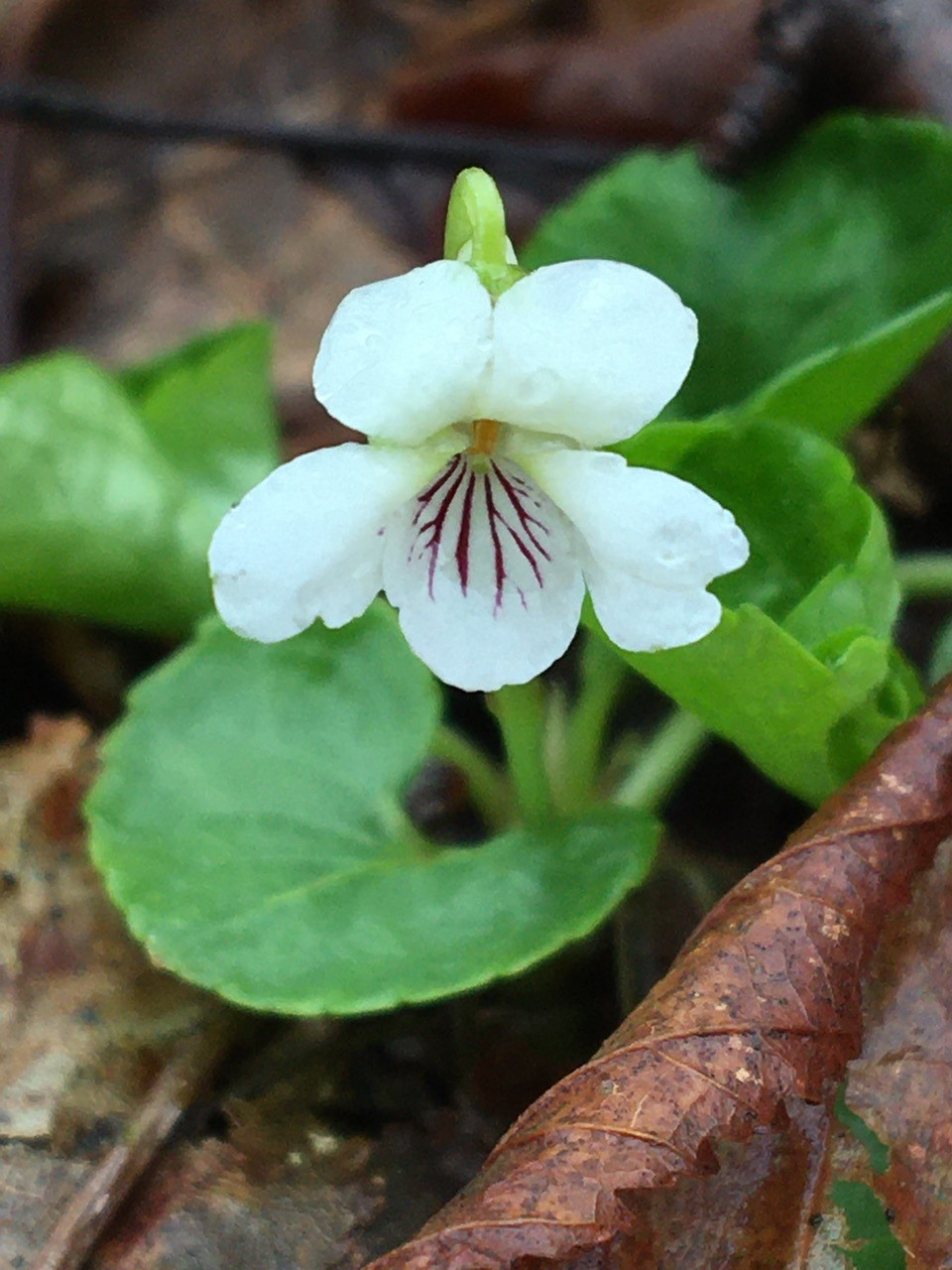 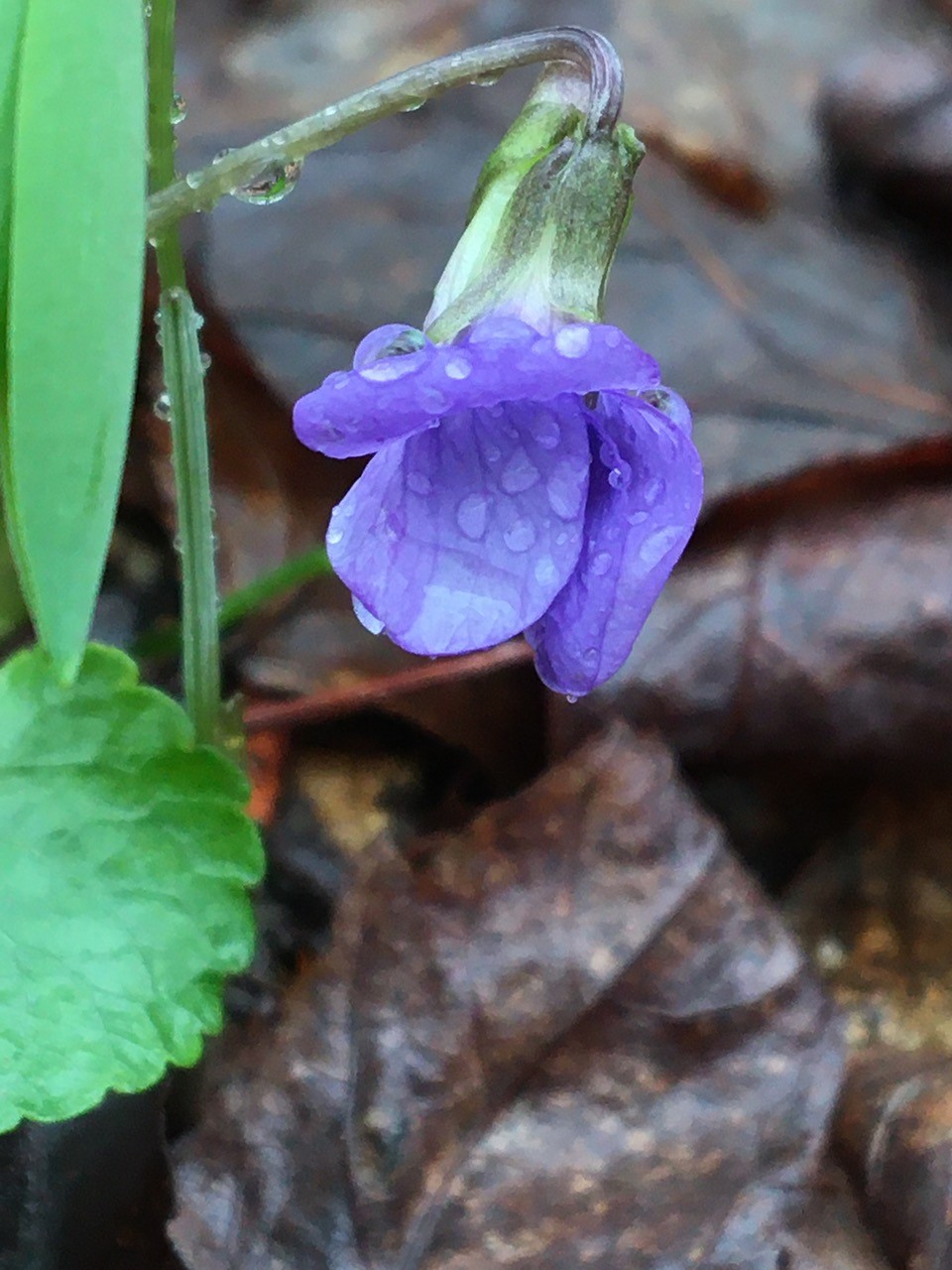 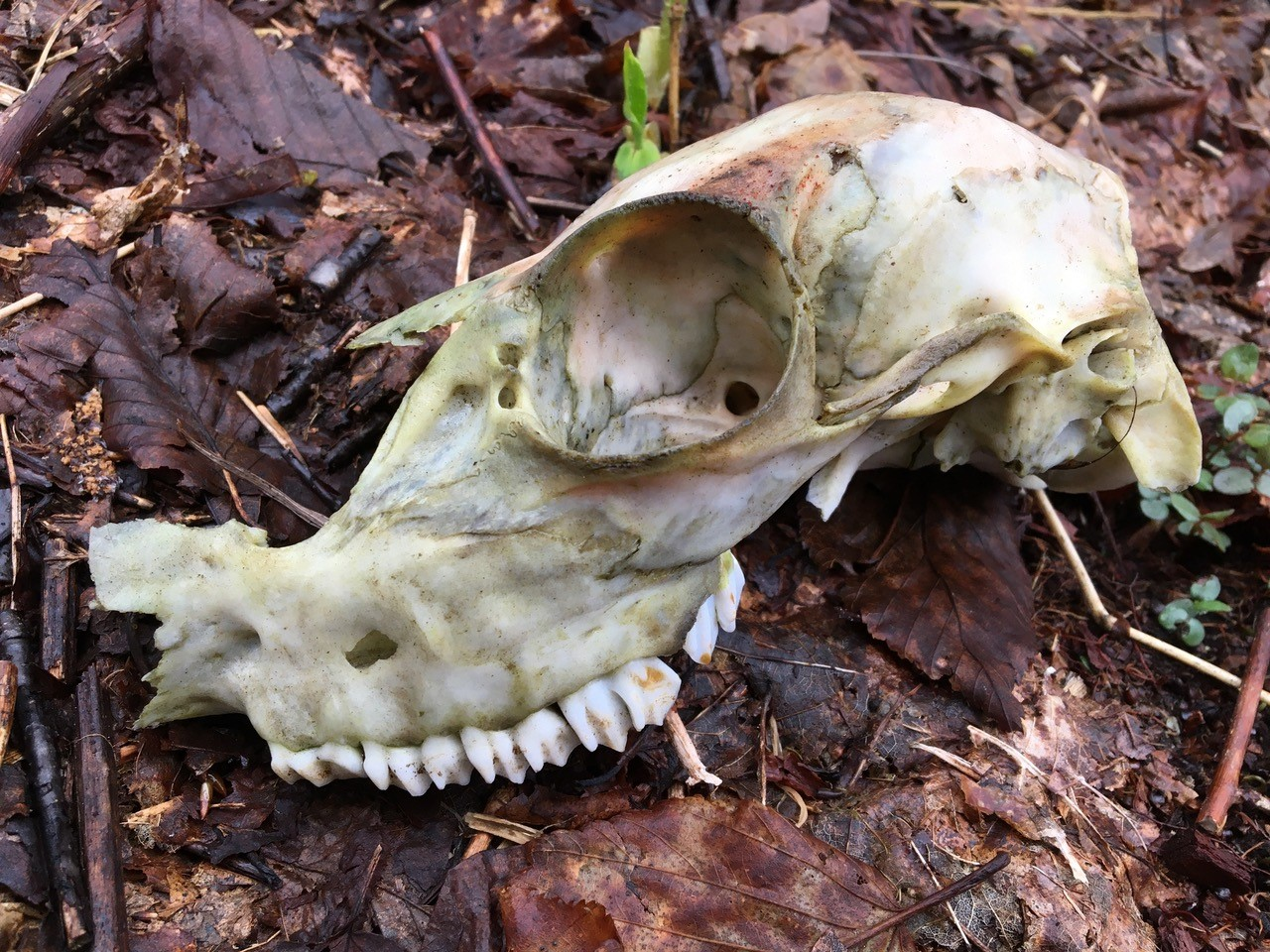 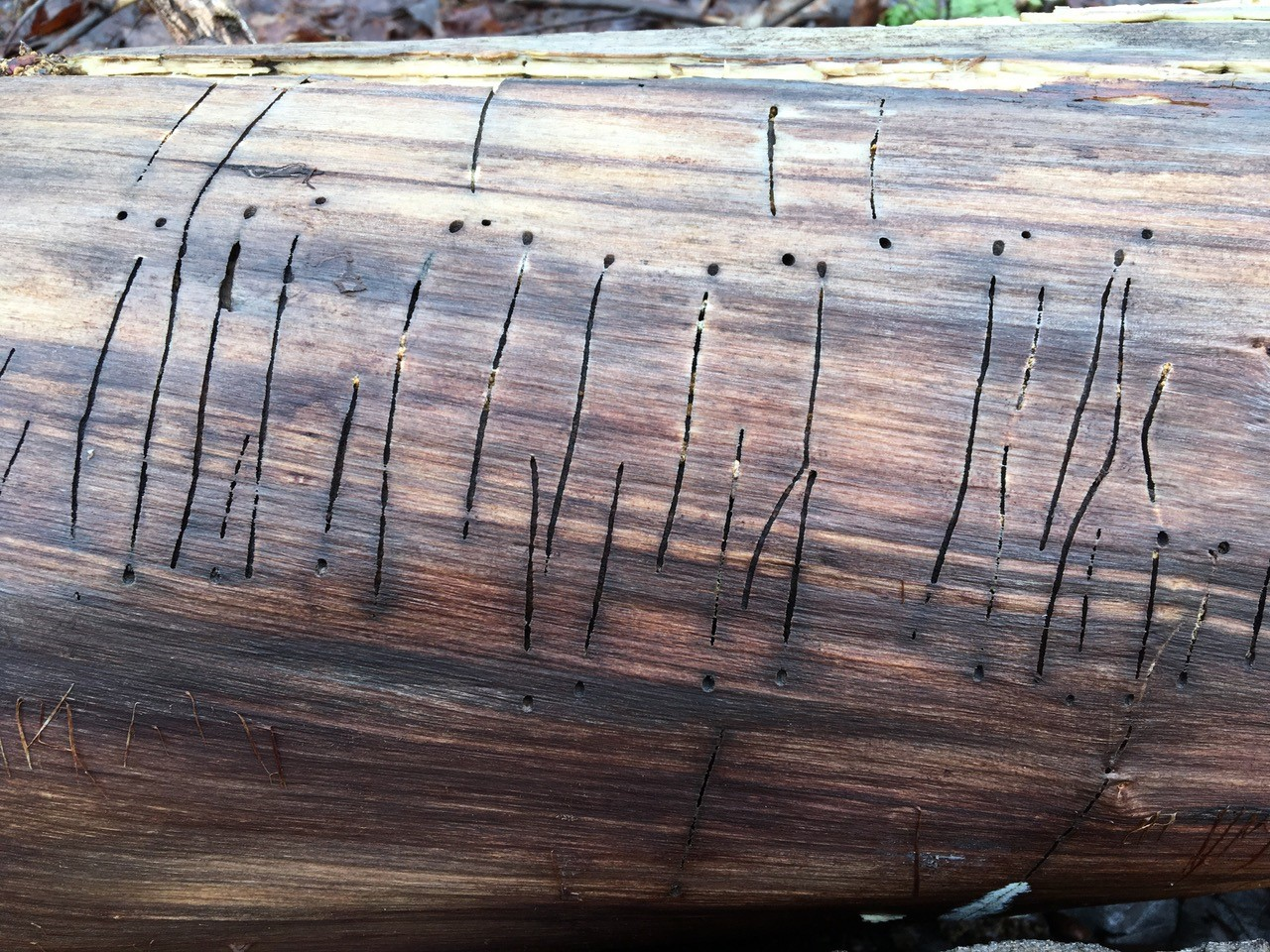 Grass inflorescence. I don’t know the species. Maybe one of your readers will. It was in a small, narrow-leaved clump. I love the flowers of grasses; they are so often overlooked. 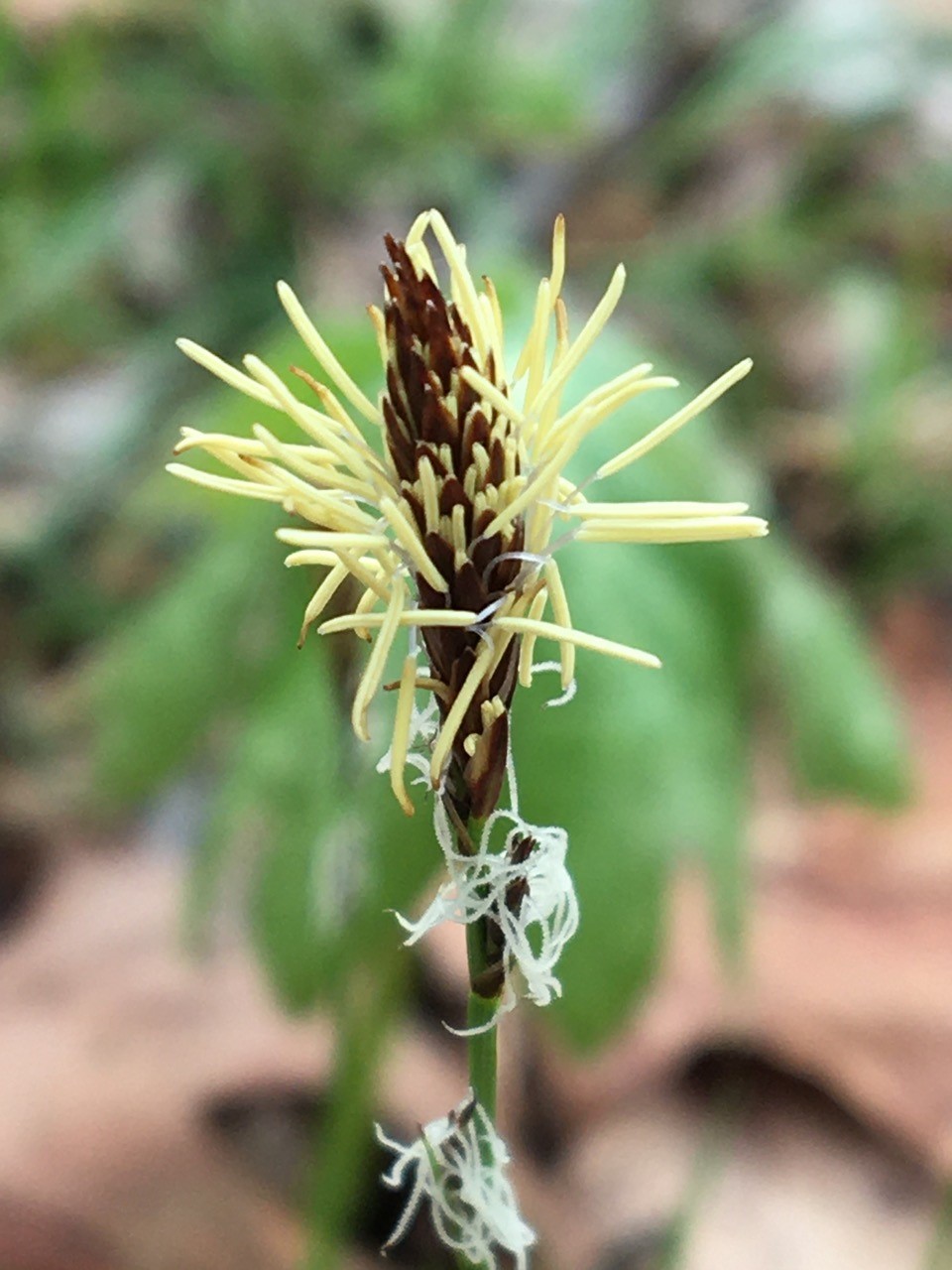 Hole in Black Cherry tree (Prunus serotina) made by a Pileated Woodpecker (Dryocopus pileatus). I should have put my hand next to it for reference. The hole is over 6 inches in length. 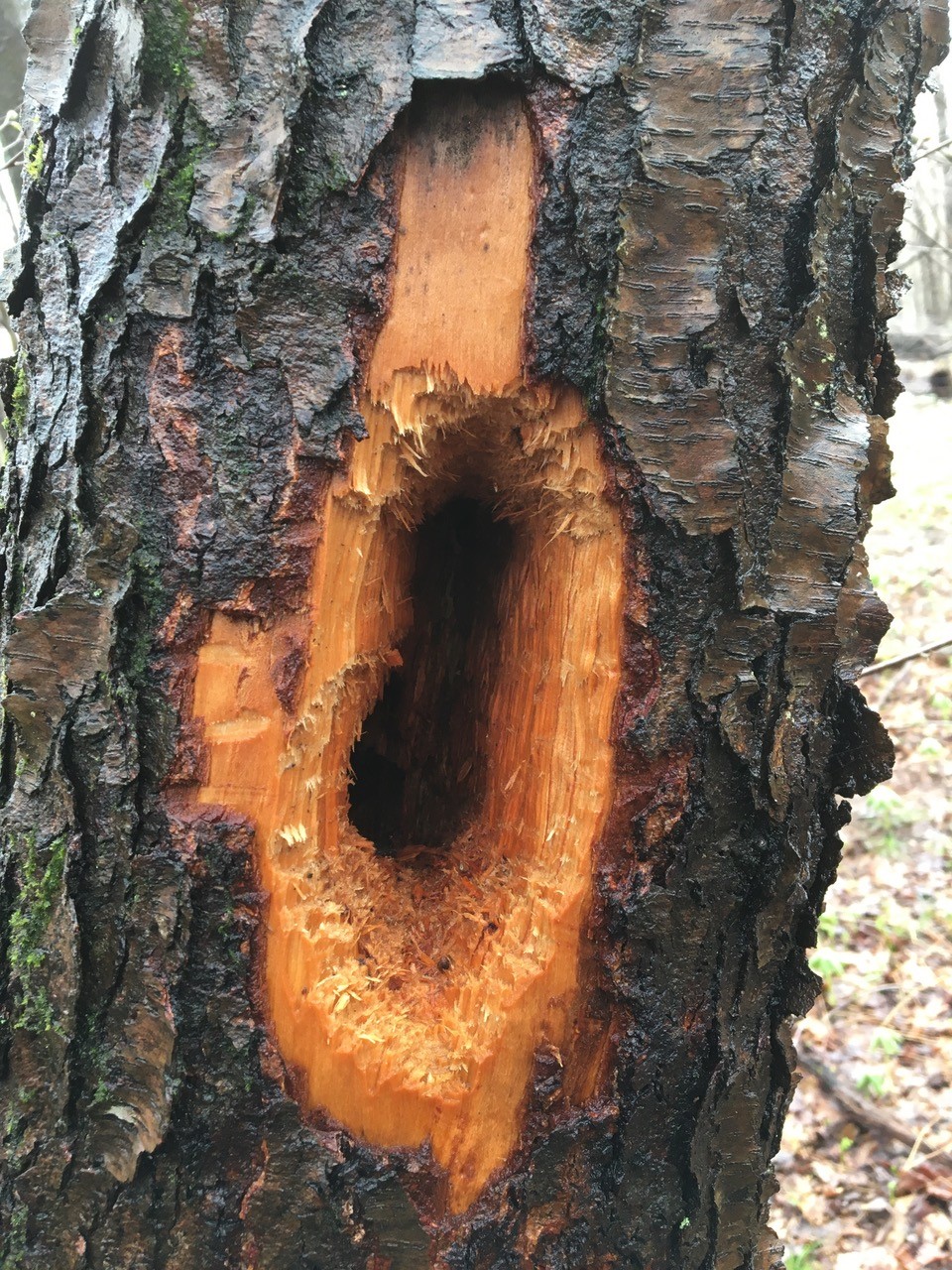 Closeup of “wand” or fertile leaf (the part containing the spores) of Cinnamon Fern (Osmunda cinnamomea). This could also be a “Spot the Insects” photo, albeit a fairly easy one. 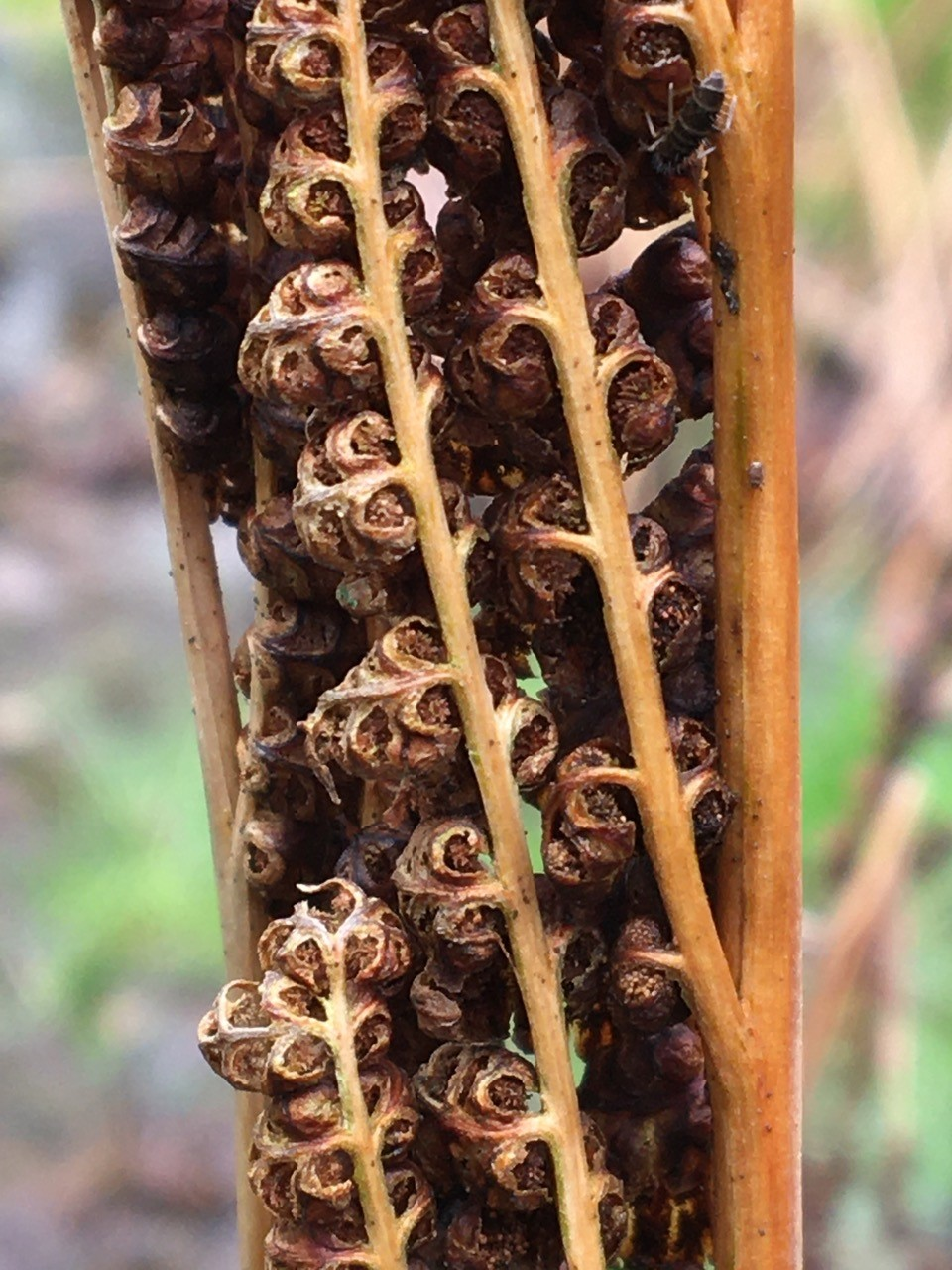 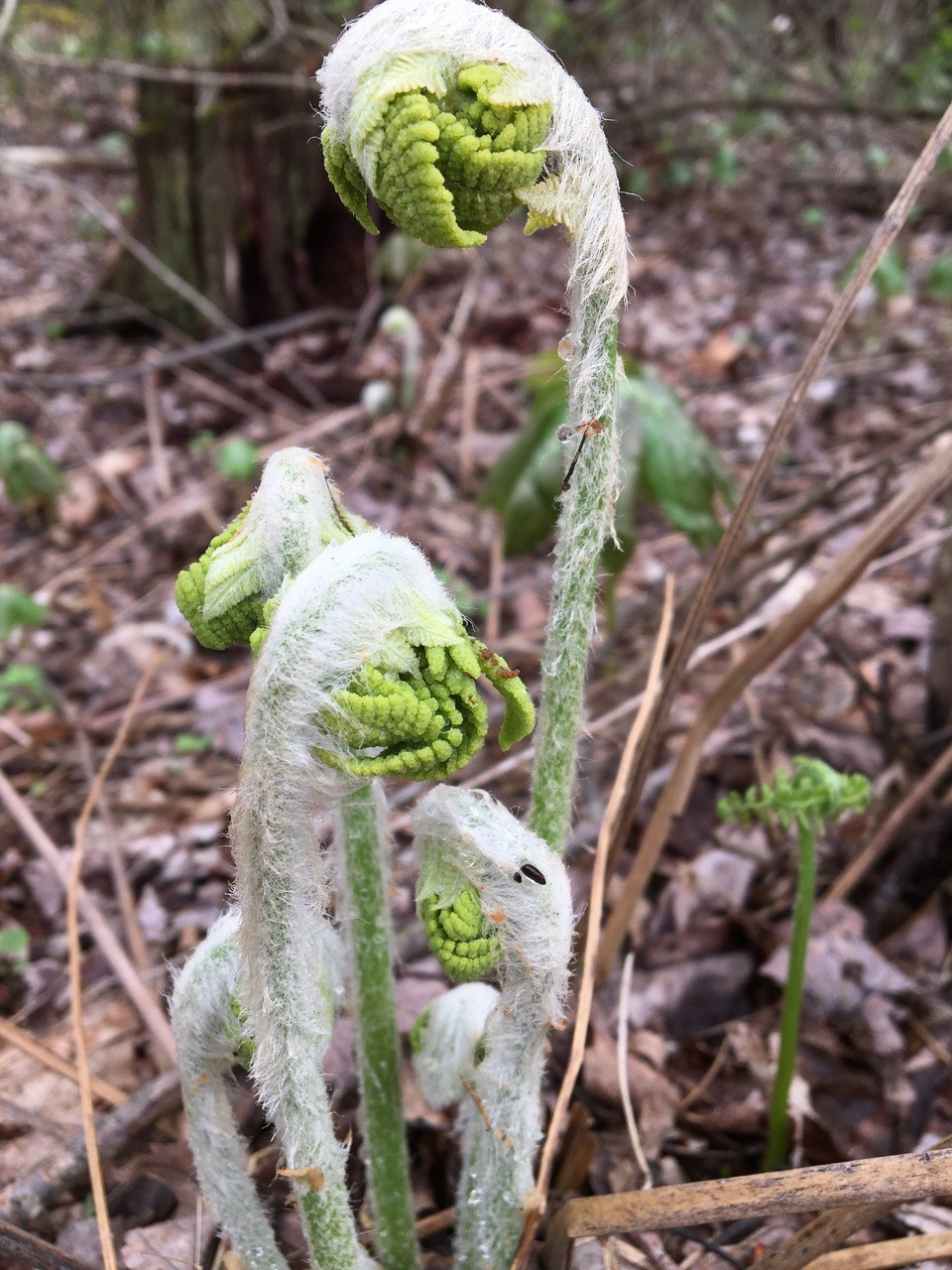 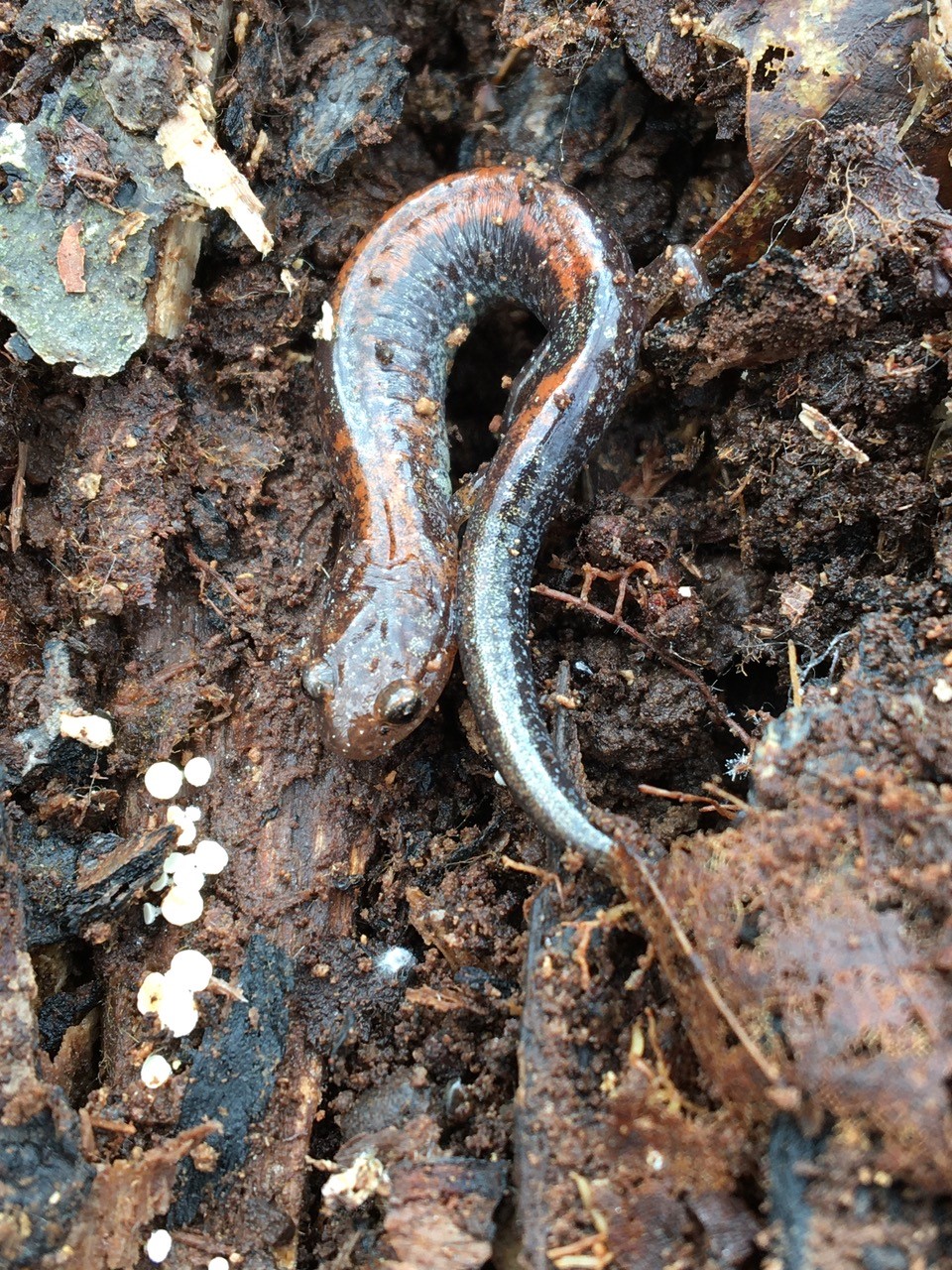 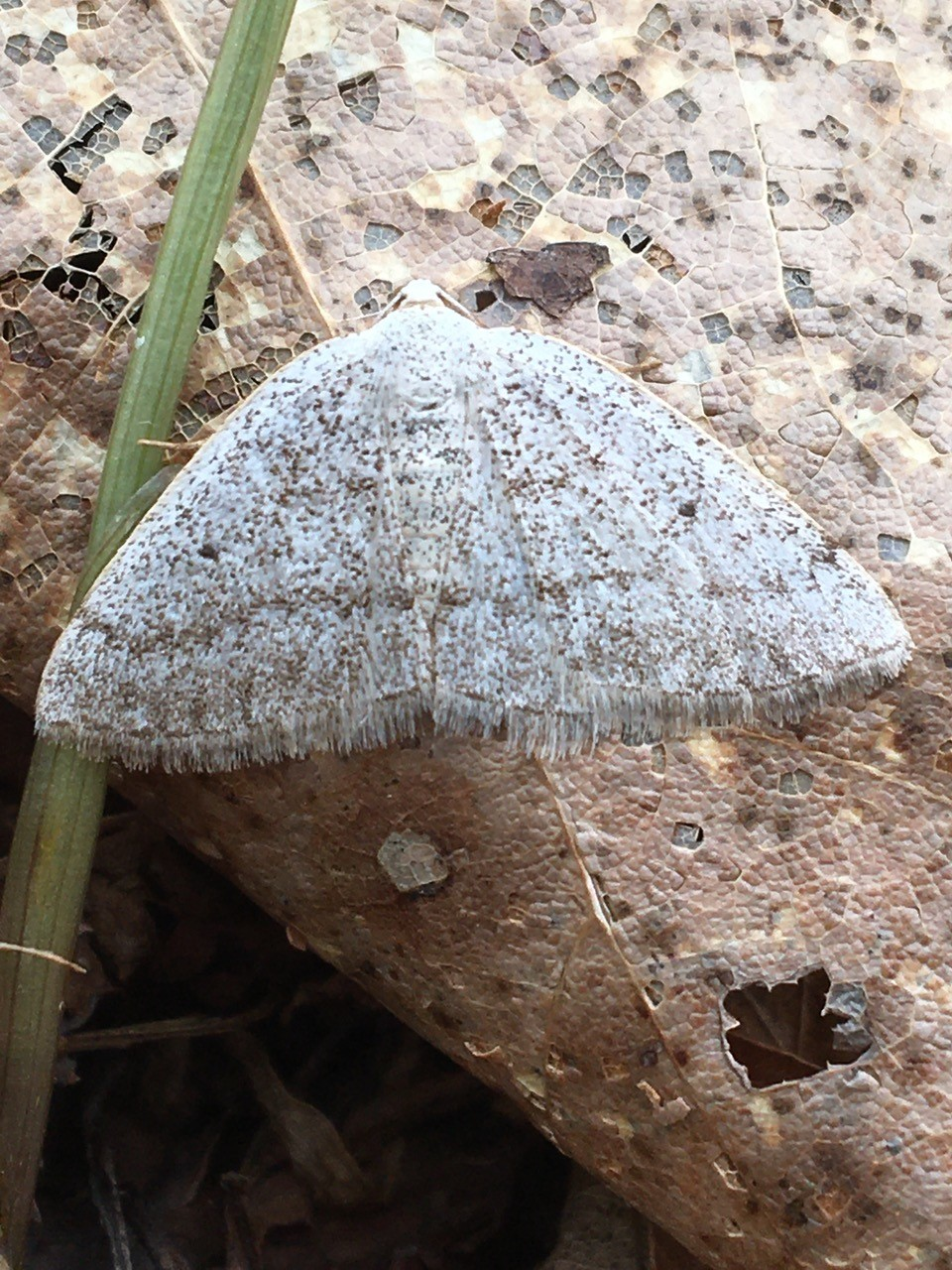 Mourning Cloak Butterfly (Nymphalis antiopa), one of the earliest butterflies to appear in our area. 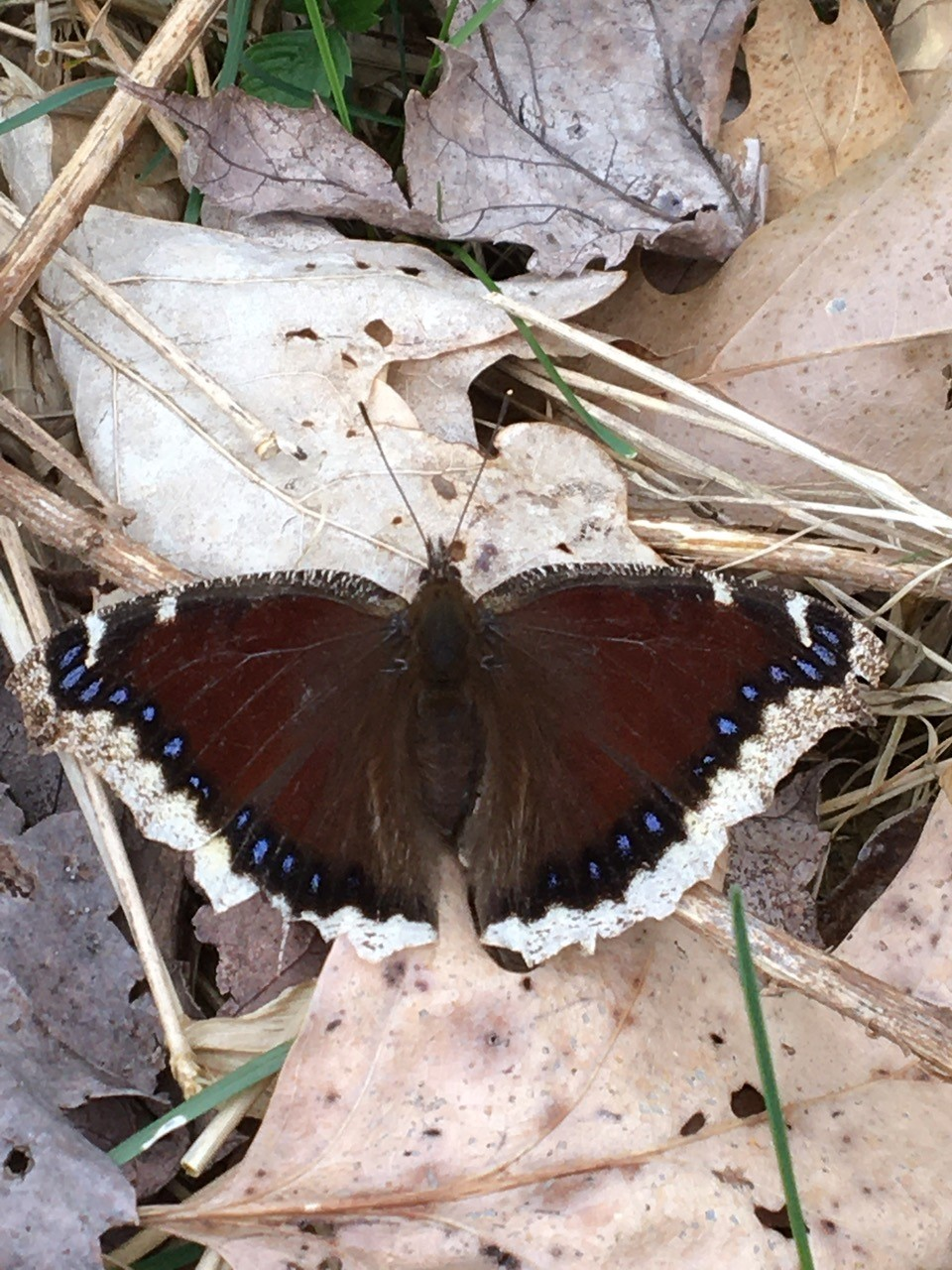 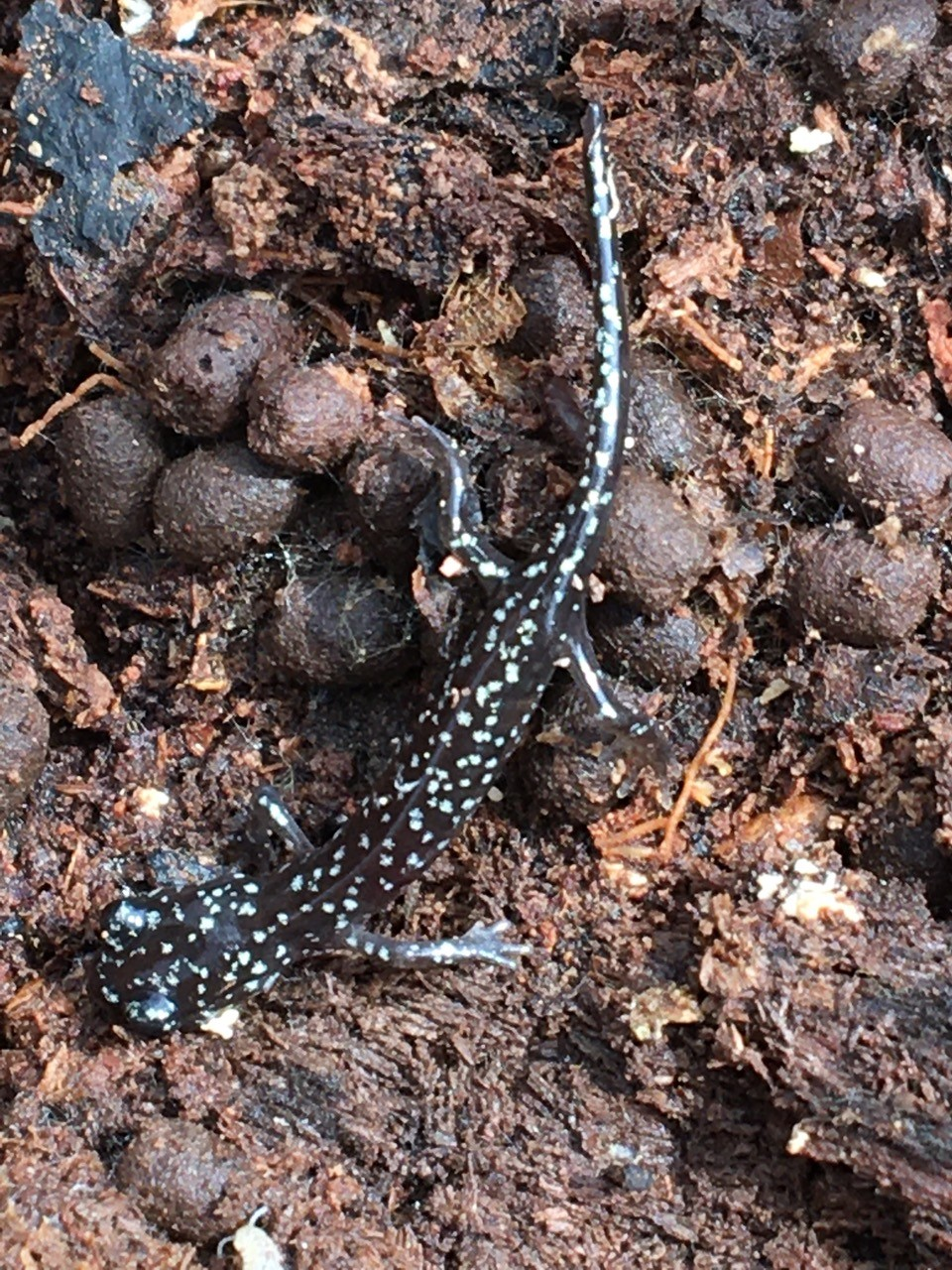 Partridgeberry (Mitchella repens). The berries are edible but tasteless. 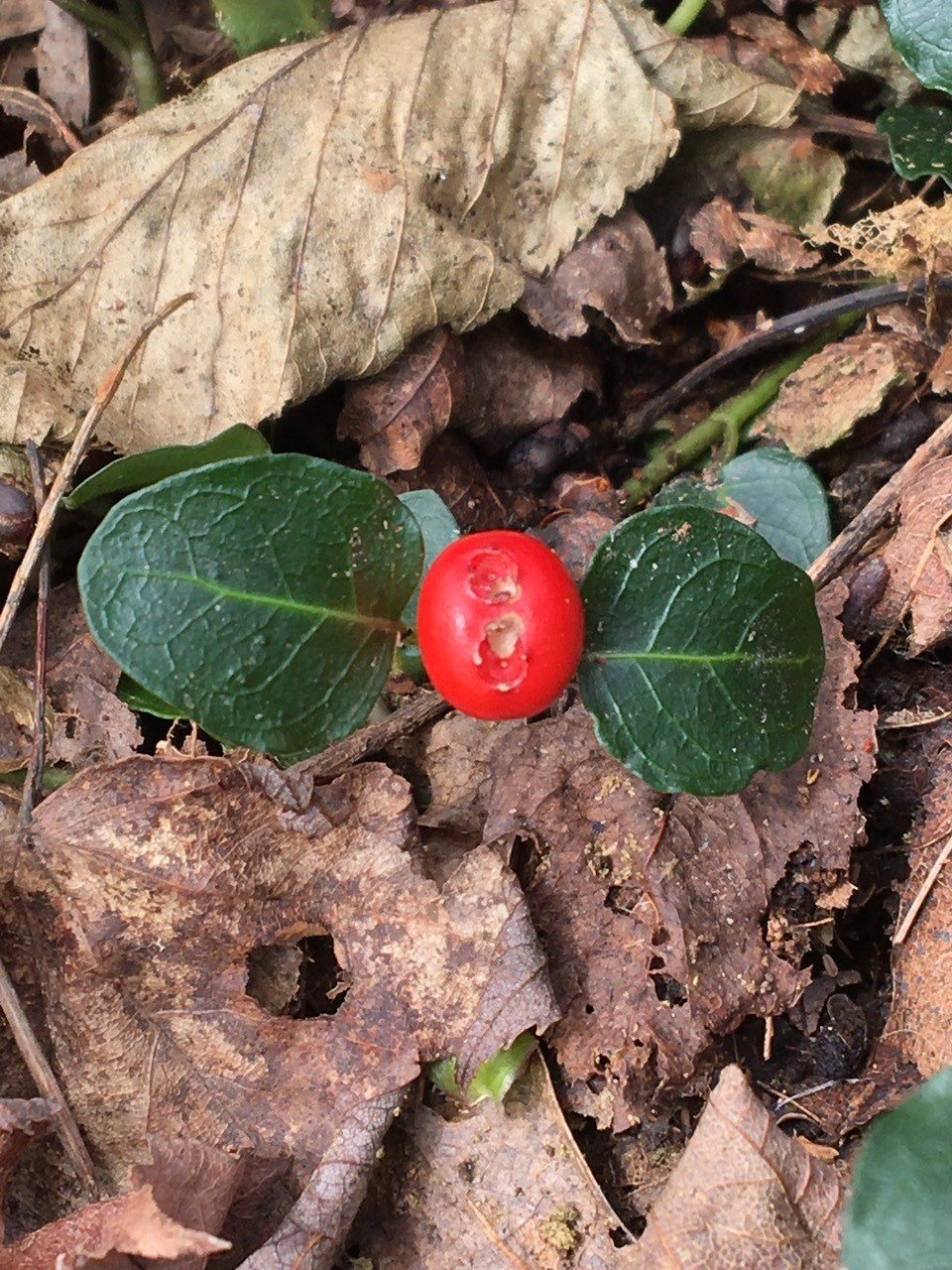 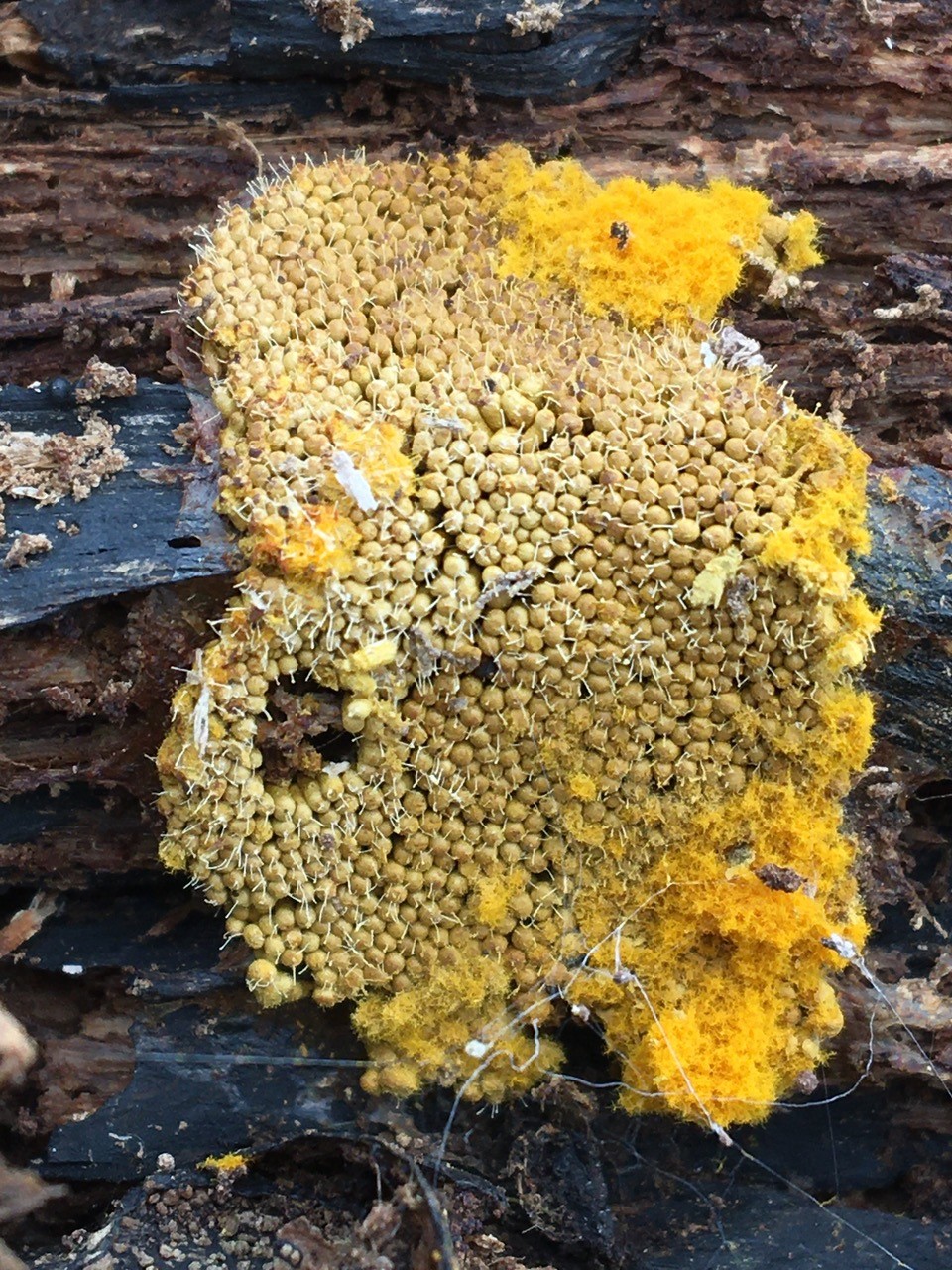 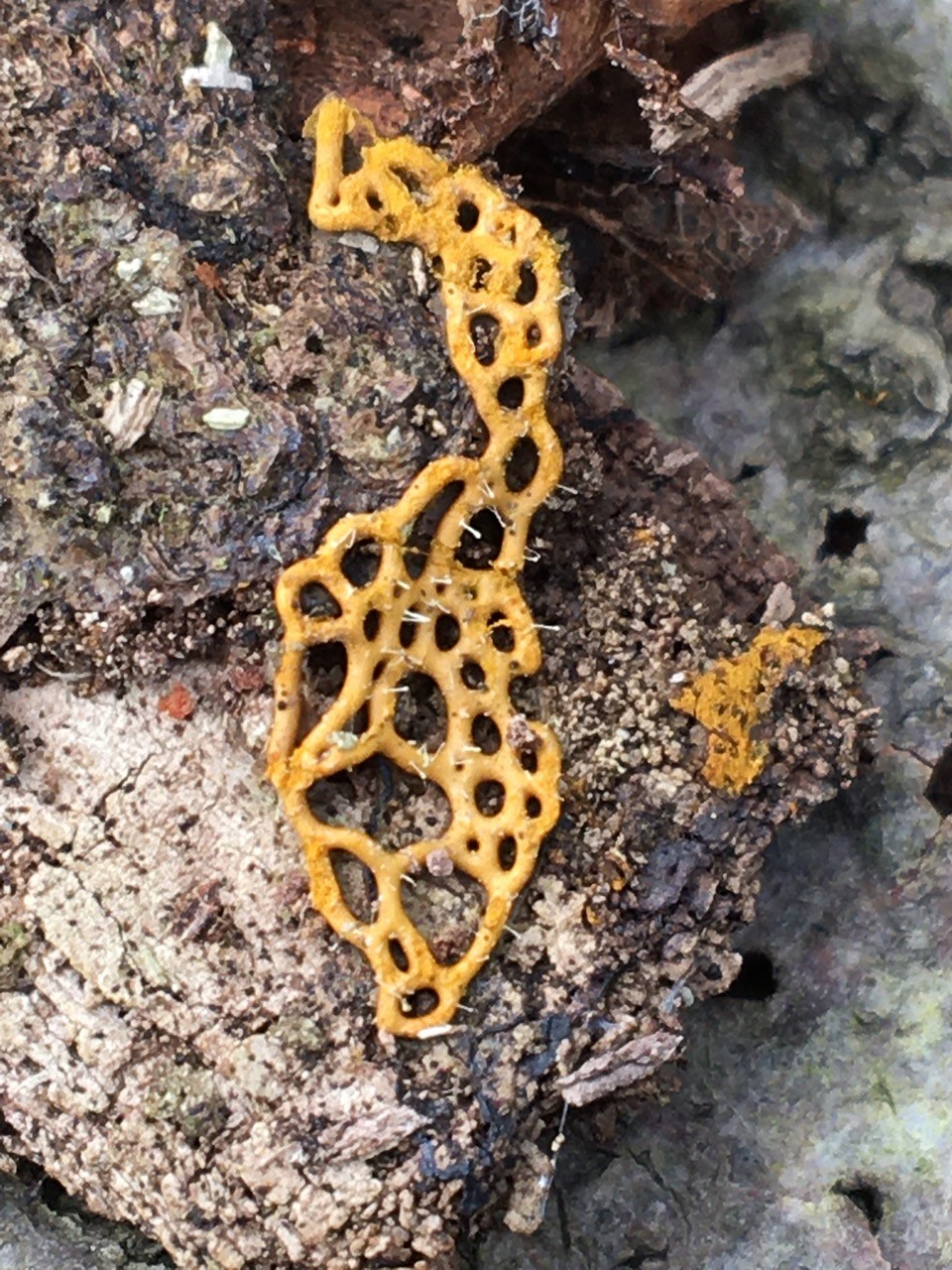 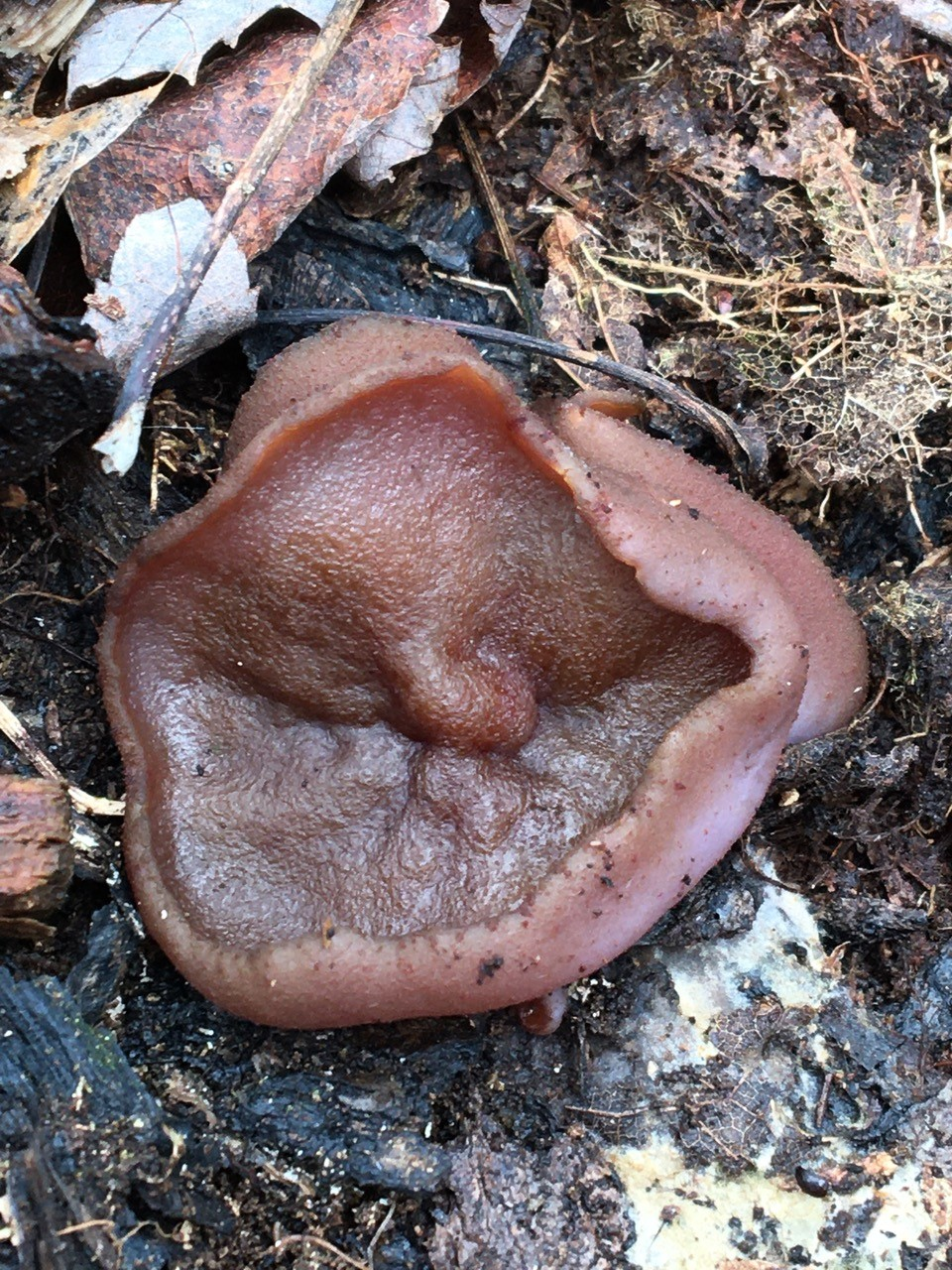 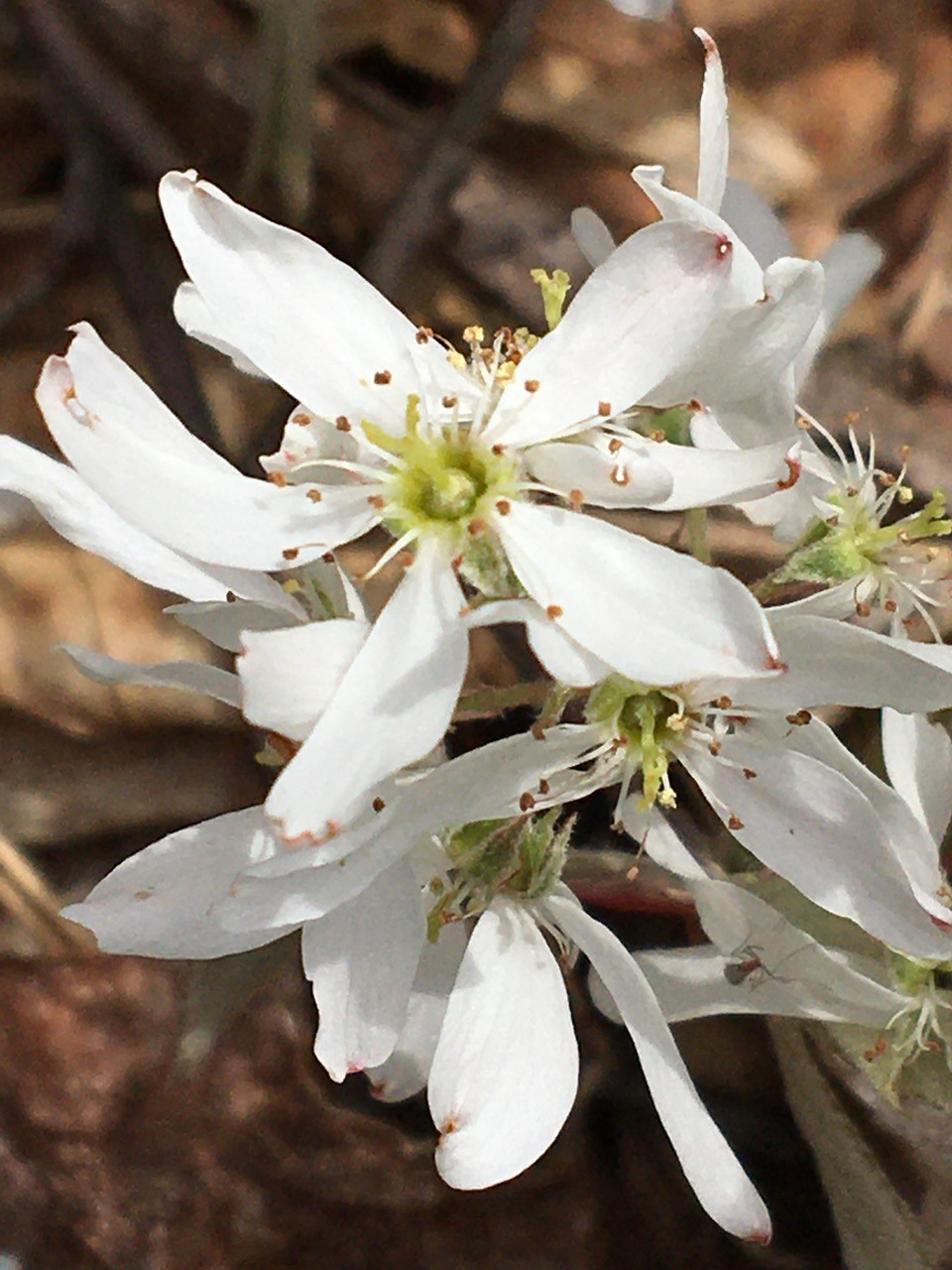 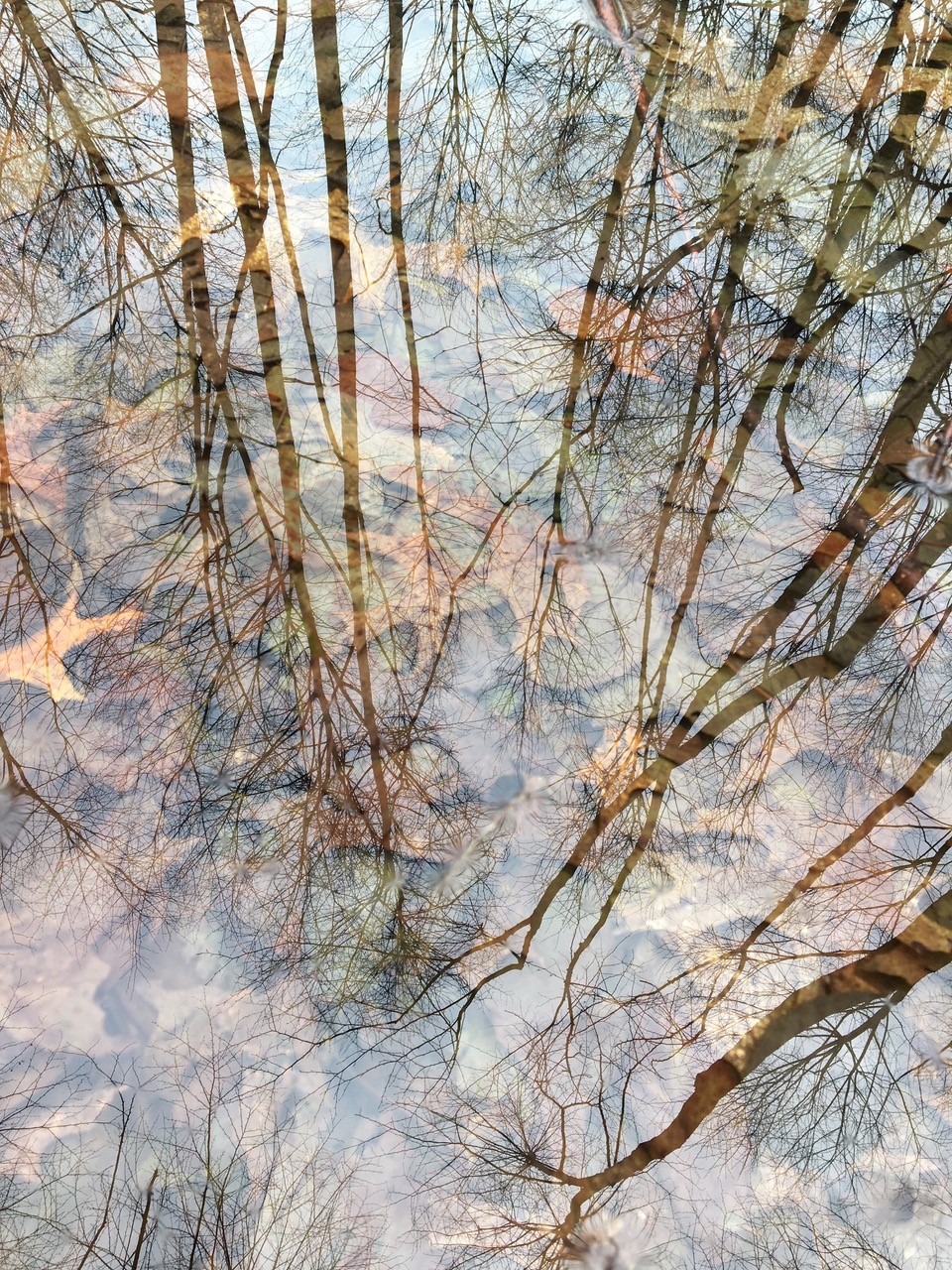 American Black Bear (Ursus americanus) Full disclosure: he came in to our back yard to get to our bird feeders, and I chased him into the woods and took this photo. I did not happen upon him while on my walk. 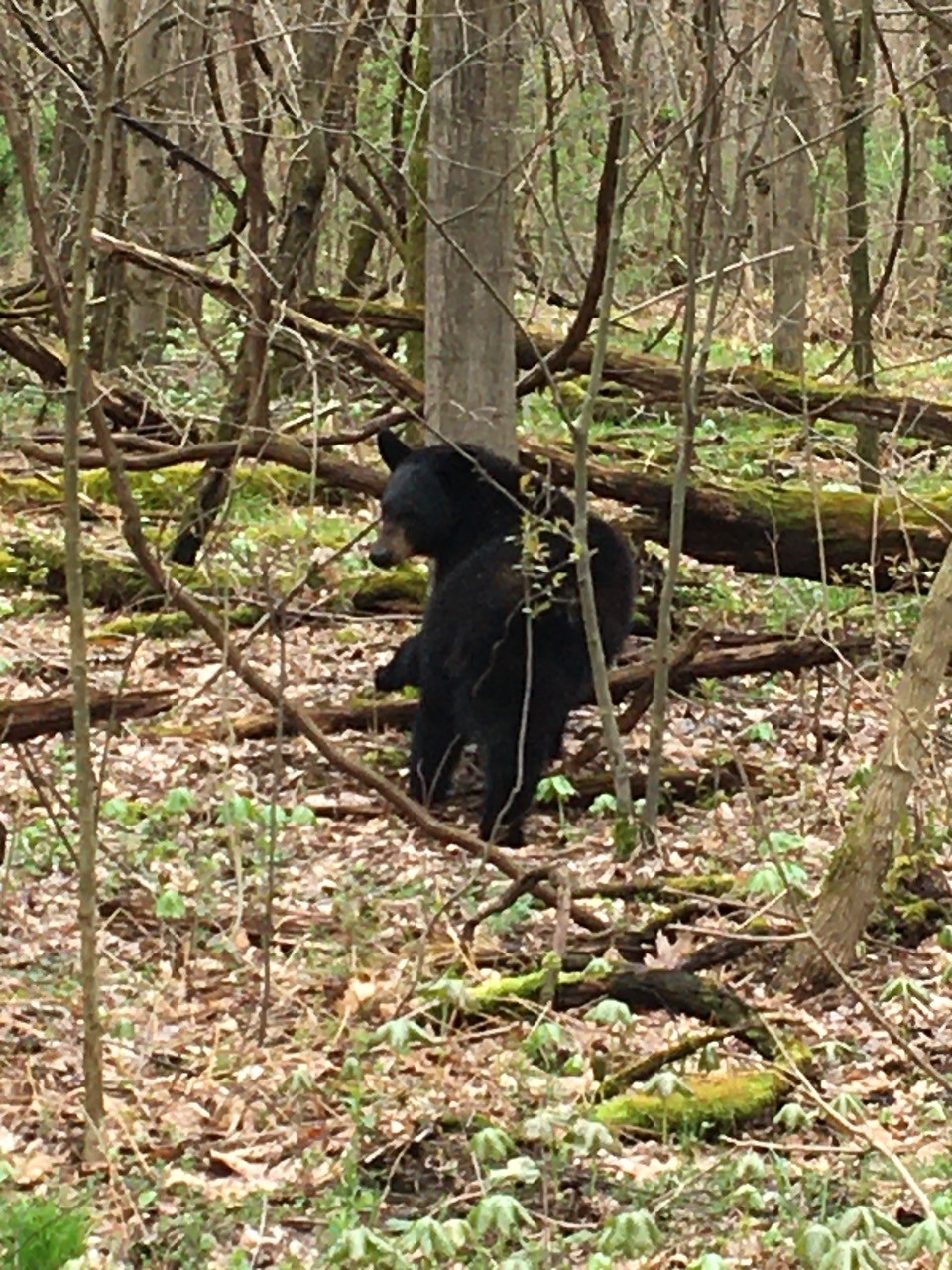 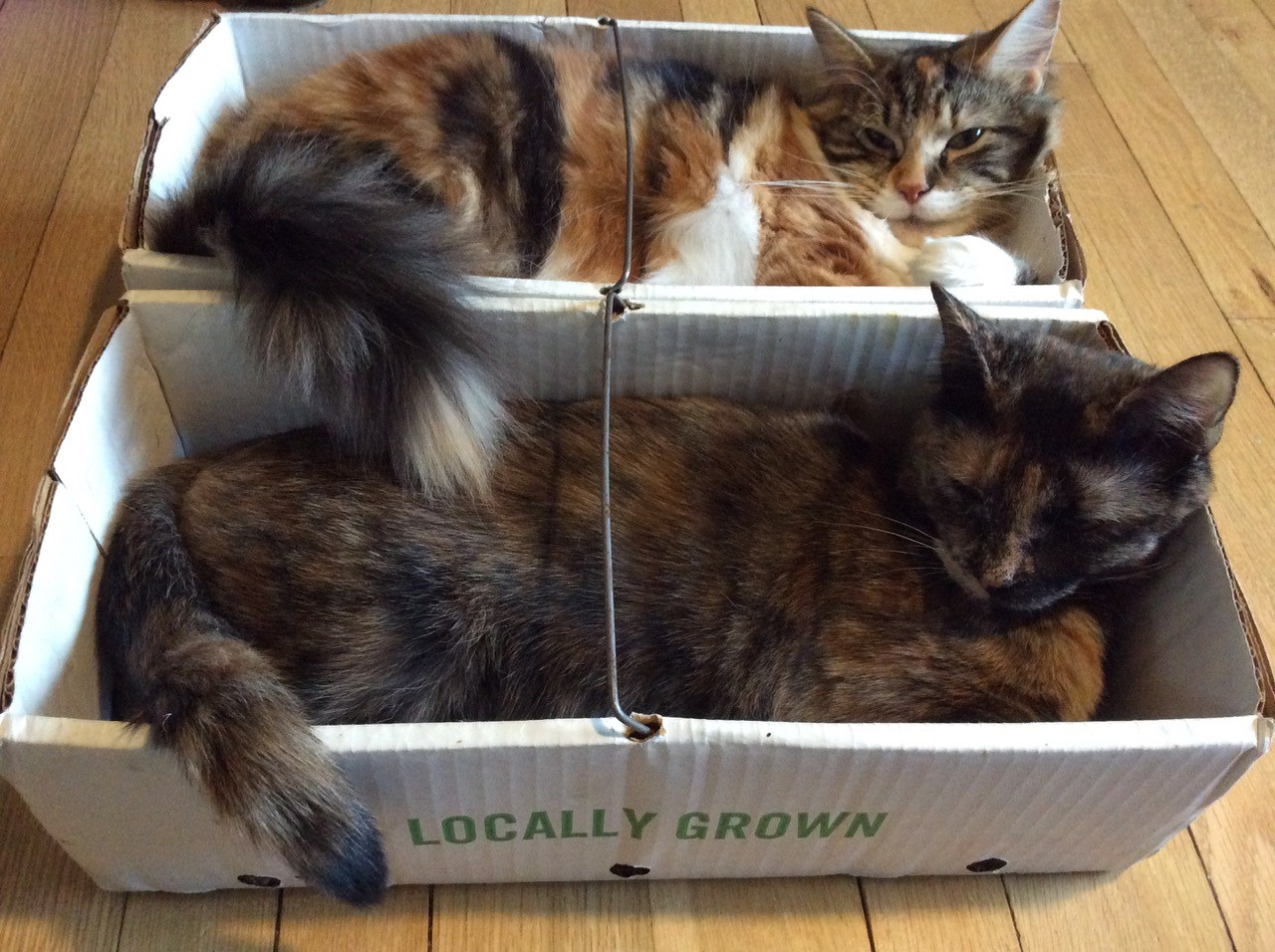 They’ve slept in these since they were kittens, and still do, despite the fact that they are considerably bigger now, especially our long-hair, Miso. Snug, but she still fits, and is somehow comfortable enough to sleep. The liquid nature of cats… 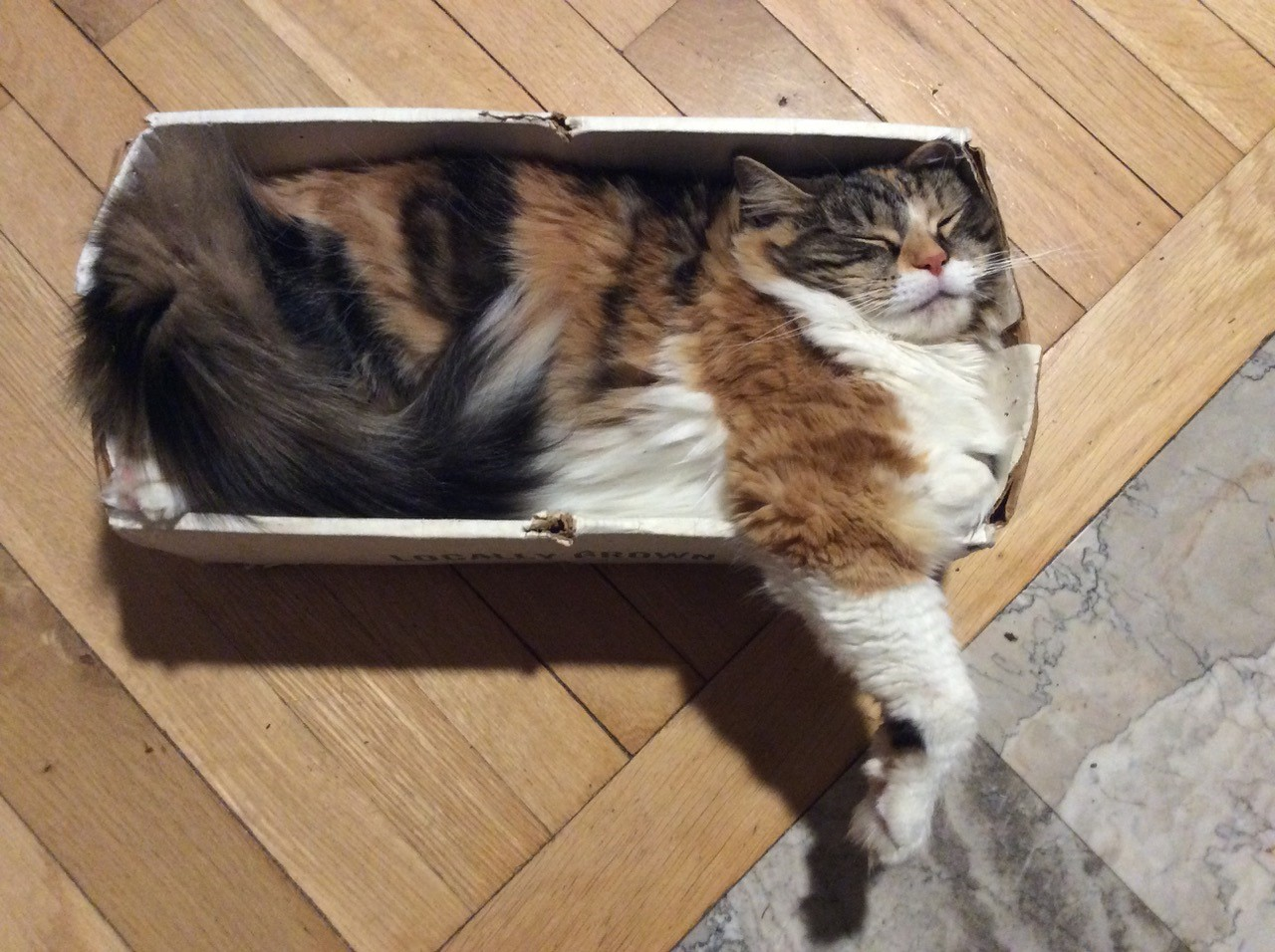