Matthew is being nice and calling me every day because he sees that the solitude is getting to me. And, in response to my telling him that what I miss most now is travel, and telling him a few of my youthful stories, he urged me to recount some of them as a form of therapy,—or at least a way to reduce the “travel longing” that plagues me.

So here’s one, and there may be more. Some of the details may be a bit hazy. It’s been a long time.

In 1973, after I had graduated from William & Mary, had entered Rockefeller University as a graduate student, and then gotten drafted as a conscientious objector, I took the government to court after realizing I’d been conscripted illegally. (From the class of 1971, nobody was drafted into the Army, but COs were still conscripted: a violation of the law. I had already worked 13 months in a hospital before I learned about the illegality of my conscription.) The federal courts decided the class action suit of Nixon et. al v Coyne et. al in our favor, and I was released from service, along with about 2500 other COs in the “class.”

The issue of graduate school wasn’t settled (I was supposed to come to the University of Chicago to study with Lewontin, but, unbeknownst to me, he’d accepted a job at Harvard), so I decided to go to Europe for a Wanderjahr. (Well, a Halbwanderjahr).

In April, my girlfriend and I flew to Athens, intending to hitchhike across Europe, winding up, we planned, in Spain. In fact, we were gone about five months, the total cost of the trip was a bit less than $600 (excluding airfare), and we did fly back in August from Madrid.

After a few days in a grubby hostel in Athens (this is a town where, after spending 3 days, you shouldn’t linger), I got my student identity card and we headed out of town. I still have that ID, and you can see that I was a longhaired hippie freak in those days, though an academic one. That card was essential in getting discounted admissions to museums and archaeological sites. 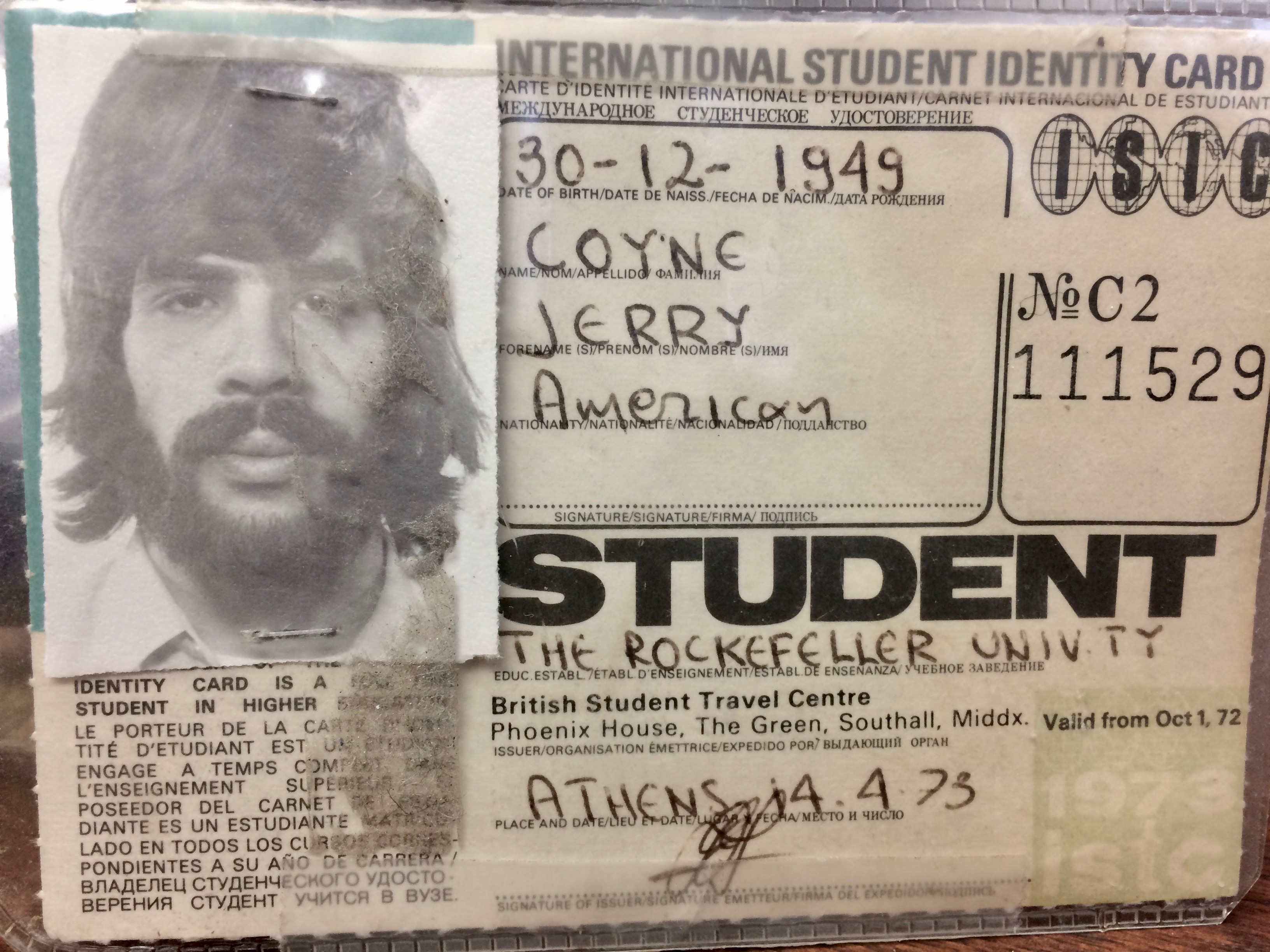 Our plan, as I recall, was to take the subway from Athens to its port, Piraeus, and get on the first ship going to a Greek island, no matter which one. When we got to the port, a ship was leaving almost immediately for Crete, and so we hopped aboard. It was an overnight journey and we slept on deck in our sleeping bags and groundsheets.

We landed in the port of Xania, and decided to hitchhike across the northern coast of Crete, going as far as we could and hoping to find some place to settle for a while and absorb some small town culture. (I had lived in Athens as a kid from age 5-7, and perhaps for that reason the language came easily to me.) I was fearless back then, and, like Neal Cassady, open to whatever lay ahead, and so we found the coastal road and stuck out our thumbs. Hitchhiking in Greece at that time wasn’t hard, and we quickly got a ride. (Traveling with a woman immensely improves your chances of being picked up.) The vehicle was a big truck carrying a huge load of oranges in its bed. My girlfriend climbed in front, while I climbed up on the tall pile of oranges in the rear. As we trundled along the coast in the morning sun with the sea to my left and the breeze ruffling my hair, I helped myself to the fresh-picked fruit, a great restorative.

I can’t remember if that truck went all the way to the end of the road, but we eventually made our way to Sitia, on the northeast coast. Here’s our journey:

Along the way we hooked up with an American medical student who was traveling, and we resolved to try to find a house together in Sitia. Back then, Sitia was a small and sleepy fishing village with a beautiful harbor, and had the three requisites for a stay: cheap and available housing, a few good restaurants, and a zaxaroplasteio (ζαχαροπλαστείο), a pastry and sweet store, for I adore Greek pastries and required a daily baklava with Greek coffee. Below is what Sitia looks like now, but back then it was just tiny hamlet with no tourists. There were few houses above the waterfront, and none atop the hill.

Yes, the water was that color.

I can’t remember how we found housing, but the three of us rented a sparsely furnished three-room house (two bedrooms and a kitchen/common room), with our share being $30 for an entire month. At some point the med student departed, and we were left to chill out for several weeks.

That’s probably the only time in my life since college that I’ve been settled for a while in a foreign town and had no work to do. But there was plenty to occupy our time. Back then I’d sleep late, and we’d wander into town to the dairy: a small, windowless room where they sold milk, cheese, and yogurt. There was also a rickety wooden table where we’d sit and have breakfast: either a huge plate of Greek yogurt with sugar (Greek yogurt is the best in the world), or a glass of warm sheep’s milk with rusks.

After breakfast it was time for a swim or a wander. We’d take long walks over the dry hills, and I still remember the scent of wild sage stinging my nostrils. At lunchtime we’d repair to the εστιατόριο (restaurant), a small family-run place. As is the custom in such places, there was no menu: you’d walk into the kitchen, lift the lids off the pots, and see what looked good. There might be stuffed cabbage, or moussaka, or pastitsio, or maybe I’d get a big peasant’s salad (horiatiki salata) with bread. It cost almost nothing.

After lunch there might be more swimming or wandering, or perhaps a sojourn at a waterside cafe to have an ouzo with the inevitable side of mezedes, the small plate of goodies that comes with every drink. It could be beans, or bread with taramosalata (fish roe), or peanuts, or whatever the taverna had on hand. It’s possible to spend hours in such a place, sipping, reading, or just watching the sea. The hours would rabbit by, and then it would be time for an afternoon visit to the zaxaroplasteio for a baklava or kataifi, with a tiny cup of Greek coffee, which I was able to order in Greek to the amazement of the waiters. (It’s either “skettos” [plain], “metrios” [a tad of sugar] or—my choice—”glykivrastos”, γλυκήβραστος [sweet and well boiled]).

There was more idling before dinner, either in a restaurant eating a big salad made from ingredients at the local market (we didn’t cook). After an evening stroll, it was time for bed.

And so a month went by, but it seemed to last just a week or two. I’m not sure I even have the ability now to relax that way, or to do nothing but cool my heels and eat for a month on end (I weighed 135 pounds back then and didn’t gain an ounce).

As the month’s lease came to an end, we had to decide where to go next. The decision was made for us, and a good one it was: there was a weekly ferry from Sitia to the island of Santorini, which turned out to be one of the most beautiful spots on earth. And after that, a long road ahead.

I revisited Sitia about two decades later, and was appalled to find that they’d built a huge Club-Med style resort there, the place was crawling with tourists, and there was little solitude to be had. But I had my memories.