Up to now we’ve had a tough governor (J. B. Pritzker) and a tough mayor (Lori Lightfoot) at the helm, and they’re not about to tolerate any violations of the quarantine restrictions. (They’re Democrats and I voted for both of them.)  Pritzker just extended our lockdown to the end of May, and Lightfoot has even closed the lakefront path, a move I thought unnecessary. Lightfoot is almost scary in her intensity, which has given rise to a number of memes about her no-nonsense attitude towards lockdown. Here are two: 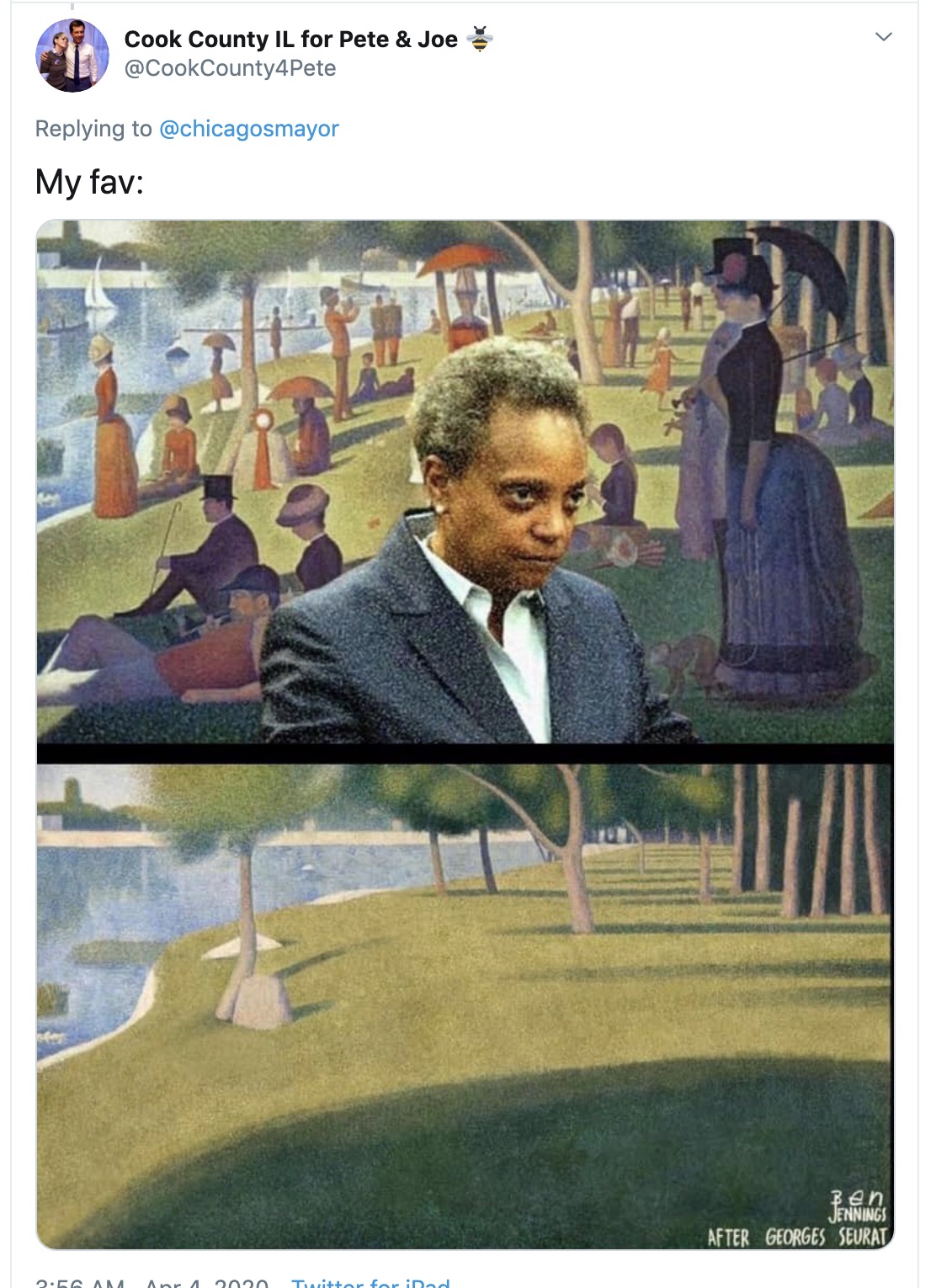 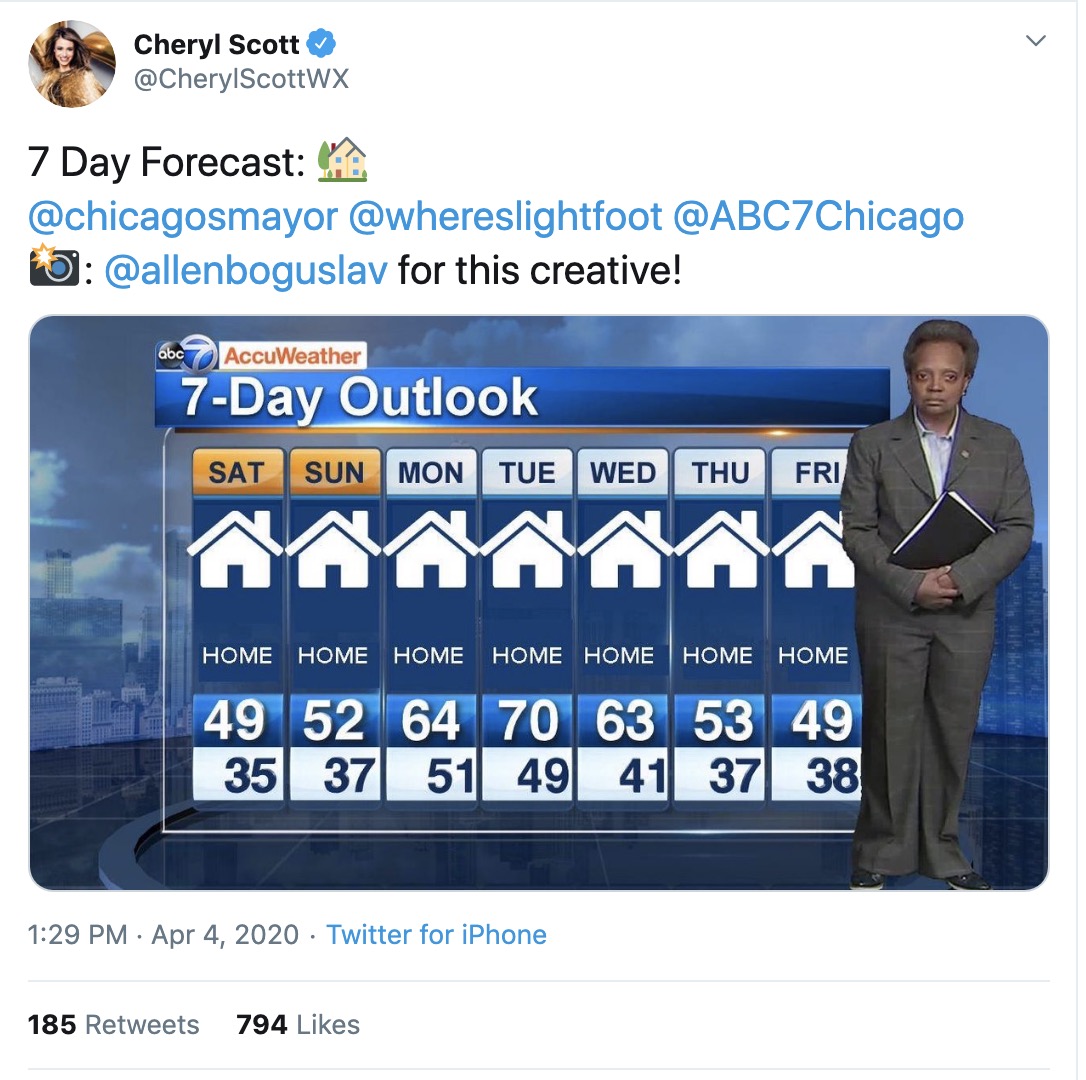 So people were naturally ticked off when the Chicago Tribune reported several weeks ago that Lightfoot got a haircut at home (click on screenshot below). The foul deed was revealed when Lightfoot’s hair stylist put up a picture of the haircut on social media. (I’m sure that stylist is toast.)

Now this is not a good move for several reasons. First of all, it’s illegal: as I understand it, if you’re a licensed hair stylist in Illinois, you are not allowed to go to people’s homes to cut their hair.

Second, if Lightfoot thought this was okay because her stylist “wore a mask and gloves”, then why did she close all the hair salons and barber shops in Chicago? Why couldn’t she leave them open, but dictate that stylists and customers wear masks and gloves? She is making herself an exception to her own rule.

Finally, it’s what they call “bad optics” for a leader to keep herself shorn when the rest of us are getting shaggy. Frankly, I’d like to see our leaders behaving the way they want us to: wearing masks (the ponderous Pritzker usually doesn’t, even when giving a press conference), and becoming shaggy over time. Leaders lead by example.

What’s worse is that Lightfoot defended herself by explicitly claiming that, as Mayor, she was an animal who was more equal than the rest of us animals; and she tried to evade further questions. As the Trib notes:

Mayor Lori Lightfoot defended getting a haircut over the weekend even though barbers and stylists were shut down under the state’s stay-at-home order, saying she’s the face of the city and the woman who cut her hair wore a mask.

Asked about photos on social media showing her with a stylist, Lightfoot acknowledged getting a haircut, then said the public cares more about other issues.

In response to a follow-up question, she said, “The woman who cut my hair had a mask and gloves on so we are, I am practicing what I’m preaching.”

No she’s not: she closed salons even though they could have been opened with the same restrictions she practiced. And then Lightfoot stepped further into it.

A reporter asked the mayor about one of her “stay home, save lives” public service announcements where Lightfoot admonishes an off-screen person by saying, “Getting your roots done is not essential.” Asked about that, a visibly annoyed Lightfoot said, “I’m the public face of this city. I’m on national media and I’m out in the public eye.  “I’m a person who, I take my personal hygiene very seriously. As I said, I felt like I needed to have a haircut,” Lightfoot said. “I’m not able to do that myself, so I got a haircut. You want to talk more about that?”

What? The rest of us don’t take their personal hygiene very seriously? Give me a break; most of us feel that we need to have a haircut, but we can’t get one.

In times when many of us are peevish and captious, this really bothered me. At least Governor Pritzker isn’t getting haircuts, saying that at some point he’ll turn into a hippie.

26 thoughts on “Lori Lightfoot gets a haircut”