Offense for offense, a woke British university can match the likes of The Evergreen State College or Middlebury College any day. British woke schools have included the London School of Economics, the rest of the University of London, and, of course, Oxford University (called “Oggsford” in The Great Gatsby). And Oggsford students has now solidified their credentials by passing an anti-hate-speech resolution, documented in this article in The Oxford Student (click on screenshot): 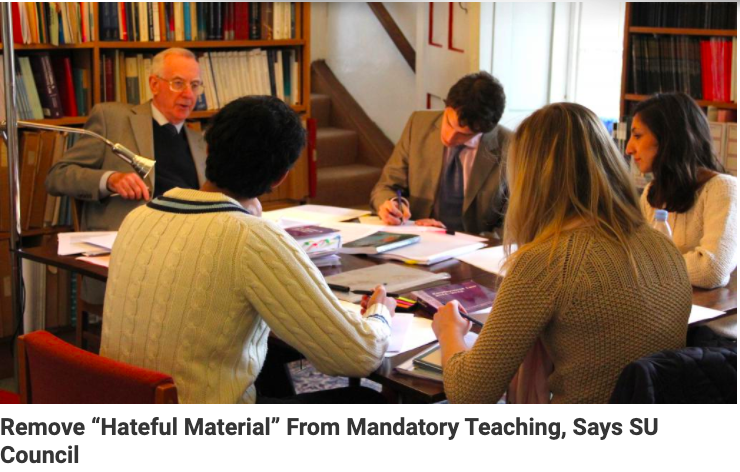 Excerpts from the article:

A motion which mandates the Oxford University Student Union (SU) to condemn the use of “hateful material” in mandatory teaching was passed in Student Council this Thursday.

Named the ‘Academic Hate Speech Motion’, the motion sets to establish a new policy on hate speech within the University to include ‘incitement of hatred on the grounds of gender identity, disability, and socio economic status, including to trans, non-binary, disabled, working-class, and women*’.

Current University policy on academic free speech protects most academic speech as long as it is within the law. The motion notes that hate speech which is ableist, misogynistic, classist or transphobic is not criminalised but believes that the University should amend the relevant policy to ‘ensure that trans and non-binary people, women, and disabled people receive equivalent protection from hateful speech within University contexts as groups which are protected by the criminal law’.

Ableism, as cited later in the piece, seems to be a particular target of this mandate, which was heavily supported by the Student Union’s Disabilities Campaign, which argues that disabled students are “particularly vulnerable to hate speech.” But are they? How often do you hear people making fun of disabled people? (Trump did it, of course, but he’s an exception.) One explanation may be the sole example of “hate speech” cited in the article:

Under the new policy set by the motion, courses that contain ‘prejudicial content’, such as the FHS Medical Law and Ethics course- which was noted as the sole example in the motion- should revise their course content and reading lists. The motion states that articles on the Medical Law and Ethics reading list are ‘ableist content’. An article entitled “Why We Should Pick the Best Children” advocates for a moral duty not to have disabled children whilst another advocates for the ‘murder of disabled children after they have been born’, the motion noted.

I haven’t been able to find the “Why we should pick the best children” article, but is it beyond debate to prevent the birth of disabled children? I don’t think so. This is in fact what medical geneticists do all the time: advise parents in danger of having a child with sickle-cell anemia or Tay-Sachs disease of the chances their child would be afflicted, so that the parents can decide whether to have a fetus tested early in case they want it aborted. The same goes for Down Syndrome: 7 American states criminalize a woman seeking abortion if they’re doing so because the fetus has the chromosomal condition causing Down Syndrome. Given that abortion is still legal for every other reason so long as it’s early in the pregnancy, this makes no sense.

Further, the article advocating “murder of disabled children after they have been born” is likely one by philosopher Peter Singer, who, like me, thinks it’s not only acceptable but the moral act to euthanize a newborn if it has a condition that will end its life shortly, and after unremitting suffering. (Anencephaly is one such condition.) Surely these issues are worthy of discussion, and it’s not “hate speech” to consider them in a medical ethics class. Such is the slippery slope of “hate speech”.

Is discussing affirmative action “hate speech” against minorities? Not in my book. Should transgender women be able to compete in women’s athletics, with our without hormone treatment or surgery? That is a fascinating topic, but could easily be construed as “hate speech” against gender identity. Yes, discussions will be hot and fraught, but that’s what college is about.

Fortunately, the Oggsford Student Union doesn’t have the power to police what is taught in the classroom, but they can make life miserable for professors. And they’re also calling for trigger warnings:

The motion also mandates the SU to lobby for trigger warnings on readings lists and for lectures, tutorials, and examinations with content deemed prejudicial against the aforementioned groups to be non-compulsory for students. It asserts that arguments based on “free speech policy are inapplicable” when students are “required by the University to listen to the speech in question”.

Well that’s a new one: professors can be censored if they say something controversial, however germane to their course, that could be construed as “hate speech.”  And really, students are that sensitive that they can’t listen to what discomfits them, and then argue back, as they should?

And so Oggsford students, entitled but authoritarian, are trying to carve out more exceptions to free speech.  They really should be mature enough to challenge arguments that they don’t like, but that’s apparently not the case. In their view, speech that makes them uncomfortable should be banned. The next step: construing such speech as “violence.”