Many of you have read about Tara Reade’s claim that Joe Biden assaulted her 27 years ago. Although her story has varied over time, her most serious claims do allege true sexual assault—digital penetration, which the Department of Justice considers rape. As far as I know about the evidence, it’s not sufficient to convict Biden in a court of law—evidence “beyond a reasonable doubt.” But Andrew Sullivan’s point in the first part of his latest column (the other two parts are about the pandemic death toll and a new documentary about Phylis Schlafly) is that according to Biden’s own standards as promulgated in Obama’s Title IX regulations, he’s guilty as hell, or would be found so in a college “trial.” 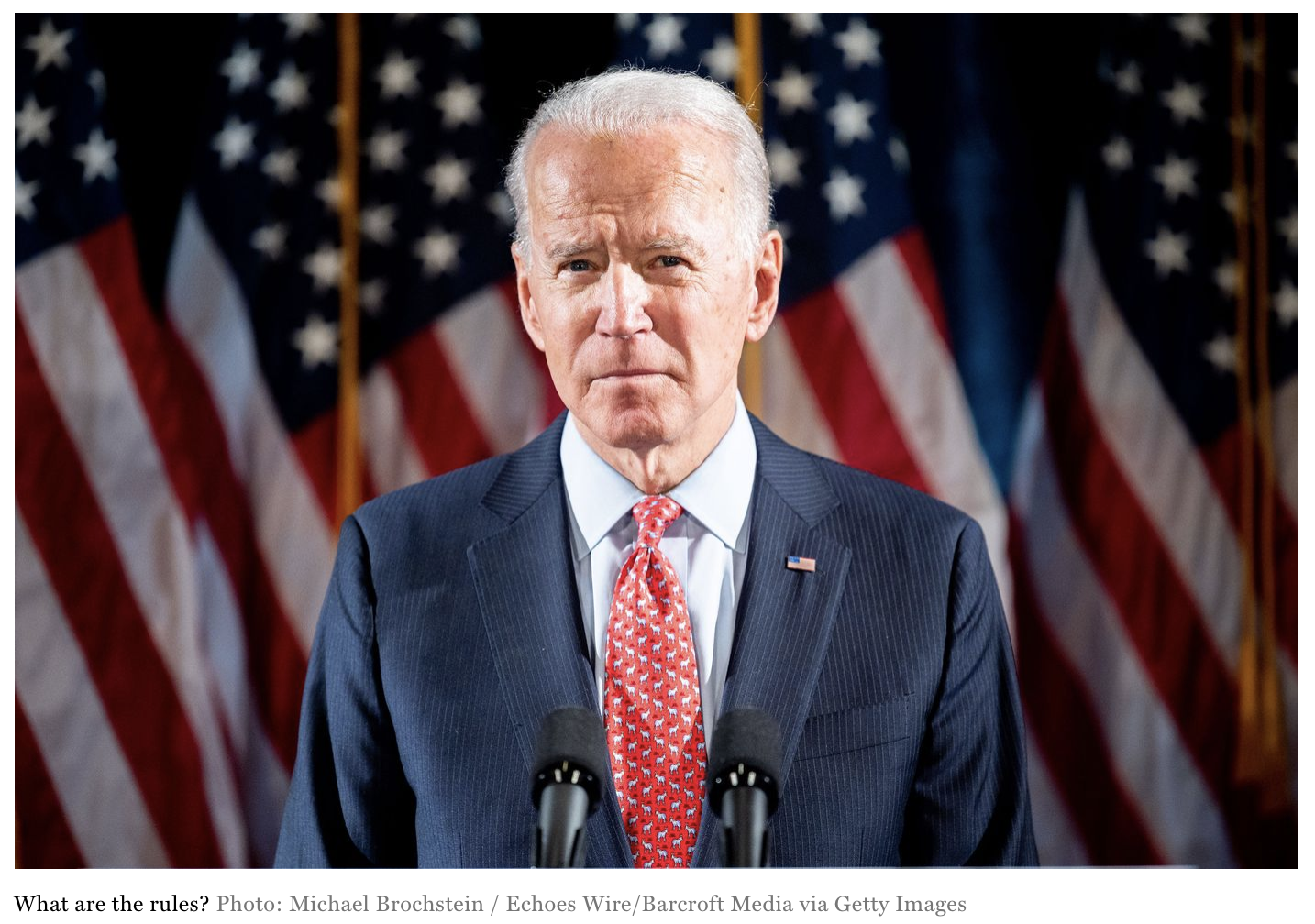 This is a little bit misleading, as Sullivan sees “Biden’s own standards”, as noted above, as those he promulgated in the revision of Title IX, not the standards of American courts. But before we get to that, remember that the Title IX regulations revised by the Obama administration—Sullivan thinks Biden pushed them hard as a form of penitence for his behavior during the Clarence Thomas hearings—weakened the standard of guilt for sexual misconduct in colleges to a “preponderance of evidence” (i.e., more than 50% probability of guilt) instead of the court standards of “guilt beyond a reasonable doubt” or “clear and convincing evidence” (> 75% probability of guilt). This means that colleges could expel you and ruin your life using standards far more lax than the courts.

There were other bizarre stipulations of the Obama procedure that reduced protection for the accused. These included the prohibition of the accused getting to face and have the accuser cross-examined, the tendency to make the finder of fact (the investigator) the same person who judged the case, the prohibition of legal representation for the accused in hearings, and so on. Jeannie Suk Gerson, a professor at Harvard Law School, summarized the unfair Obama stipulations in a 2019 New Yorker article, adding how, under Trump, Betsy DeVos changed them for the better. (I think this is one of the few good things to come out of the Trump Administration.)  One of the legacies of the Obama-era regulations is that those found “guilty” in college Star Chambers have often sued the colleges, and have won at least half the time, costing universities large amounts of dosh. And there will be more such suits.

So are Biden’s own standards those that he pushed under Obama, or those of American courts? If the former, he’s surely guilty, if the latter, surely not. But Biden made one comment suggesting that courts themselves should adhere to Title IX standards. Sullivan remarks:

[Biden] brushed aside most legal defenses against sexual harassment. In a speech at the University of Pittsburgh in 2016, for example, Biden righteously claimed that it was an outrage that any woman claiming sexual assault should have to answer questions like “Were you drinking?” or “What did you say?” “These are questions that angered me then and anger me now.” He went on: “No one, particularly a court of law, has a right to ask any of those questions.”

That implies that his Title IX standards should be used in court as well. That would be a disaster for the American judicial system, changing all the standards of evidence and even its standard of guilt.

At any rate, Sullivan goes hard after Biden for this claimed hypocrisy:

On Friday’s Morning Joe, Biden laid out a simple process for judging him: Listen respectfully to Tara Reade, and then check for facts that prove or disprove her specific claim. The objective truth, Biden argued, is what matters. I agree with him. But this was emphatically not the standard Biden favored when judging men in college. If Biden were a student, under Biden rules, Reade could file a claim of assault, and Biden would have no right to know the specifics, the evidence provided, who was charging him, who was a witness, and no right to question the accuser. Apply the Biden standard for Biden, have woke college administrators decide the issue in private, and he’s toast.

Under Biden, Title IX actually became a force for sex discrimination — as long as it was against men. Emily Yoffe has done extraordinary work exposing the injustices of the Obama-Biden sexual-harassment regime on campus, which have mercifully been pared back since. But she has also highlighted Biden’s own zeal in the cause.

Do read the Yoffe pieces!

Sullivan doesn’t let up (and remember that he, like me, is going to vote for Biden):

In 2014, the Obama administration issued another guidance for colleges which expanded what “sexual violence” could include, citing “a range of behaviors that are unwanted by the recipient and include remarks about physical appearance; persistent sexual advances that are undesired by the recipient; unwanted touching; and unwanted oral, anal, or vaginal penetration or attempted penetration.” By that standard, ignoring the Reade allegation entirely, Joe Biden has been practicing “sexual violence” for decades: constantly touching women without their prior consent, ruffling and smelling their hair, making comments about their attractiveness, coming up from behind to touch their back or neck. You can see him do it on tape, on countless occasions. He did not stop in 2014, to abide by the standards he was all too willing to impose on college kids. A vice-president could do these things with impunity; a college sophomore could have his life ruined for an inept remark.

. . .By Biden’s own standards, he’s guilty as charged. He never got affirmative consent from Reade, and she feels and believes he assaulted her. He never got affirmative consent for countless handsy moves over the decades that unsettled some of the recipients of such affection. End of story. By Biden’s own logic, it is irrelevant that he didn’t mean to harm or discomfit anyone, that Reade’s story may have changed over time, that she might have mixed motives, that she has a record of erratic behavior, a bizarre love for Vladimir Putin, and a stated preference for Bernie Sanders, who was Biden’s chief rival. It’s irrelevant that she appeared to tweet that she would wait to launch her accusations against Biden until the timing was right. And her cause has been championed by the Bernie brigade. The many red flags and question marks in her case are largely irrelevant under Biden’s own campus standards.

It seems to me that Biden has a simple choice here. He can either renounce his previous astonishingly broad and illiberal view of “sexual violence” and argue for more nuance and due process so that a case like Reade versus Biden isn’t a slam dunk in advance; or he should follow his own rules and withdraw from the presidential race. He will, of course, do neither.

I’ll vote for him anyway, because Trump.

Because. . . . Trump’s record of sexual misconduct is far more damning than Biden’s. But that’s a hell of a way to vote: choosing the lesser of two predators. In the end, though, I’m not convinced that Biden is guilty of assaulting Reade. The allegations are unsettling, but they’re old, not very substantiated, and I’d rather not ruin the country by voting for a predatory Republican narcissist over a “handsy” Democrat.

Sullivan is right to point out the double standard that Biden is using now versus what he pushed on American colleges. But I think he’s being too hard on Biden by saying that voting for Biden means he, Sullivan, would “be voting for a hypocrite who wants to ruin others’ young lives for what he has routinely and with impunity done.” That all depends on whether you think that the American courts should adhere to Biden’s own Title IX standards. I happen to think the reverse—that American colleges and universities should adhere to the American courts’ standards. And under those standards, you must consider Biden as innocent until proven guilty. You don’t have to vote for him, of course, but that would be a vote for someone far worse.

UPDATE: Reader Barry pointed me to an article in USA Today by a former Federal prosecutor, detailing why he thinks Reade’s claim against Biden is very, very weak.

82 thoughts on “Sullivan: According to his own standards, Biden’s guilty”