Good morning on a weekend that, these days, doesn’t seem like a weekend: it’s Sunday, April 19, 2020—exactly two weeks until the due date of The Great Leap Forward: when the broods of ducklings will jump from the windowsills to be led by Honey and Dorothy to the pond. I’m nervous!

Foodimentary tells us, in their campaign to encourage cultural appropriation, that it’s National Rice Ball Day. It’s also National Garlic Day, National Amaretto Day (too sweet and cloying!), John Parker Day, celebrating the captain of the militia in Lexington, Massachusetts, where the first skirmish of the American Revolution began , and Dutch-American Friendship Day as well.

The two-week Google Doodle series on coronavirus helpers has apparently come to an end, though the virus is still widespread; you can see all the previous Doodles here.

News of the Day: Dire, dire dire. As I wrote yesterday, the protests against lockdowns continued yesterday, expanding into three states, although the numbers of protestors remains small. Coronavirus deaths continue to mount: 39,158 in the US and 160,952 in the world.

Here’s an excerpt from Tom Friedman’s latest NYT column, “Trump is asking us to play Russian roulette with our lives.” It’s about the Chief Moron’s latest series of tweets urging people in three states to “liberate” themselves:

Because it is clear that millions of Americans are going to stop sheltering in place — their own President is now urging them to liberate themselves — before we have a proper testing, tracking and tracing system set up. Until we have a vaccine, that kind of system is the only path to dramatically lowering the risk of infection while partially opening society — while also protecting the elderly and infirm — as Germany has demonstrated.

And as individuals, every person will be playing Russian roulette every minute of every day: Do I get on this crowded bus to go to work or not? What if I get on the subway and the person next to me is not wearing gloves and a mask? What if they sneeze? Do I get in the elevator at the office if there is another person on it? Do I go into the office lunchroom or not? Do I stop for a drink at this bar, where the stools are six feet apart, or that crowded one my friends chose? Do I use this toilet or that drinking fountain? Do I send my kid back to school or not? Do I stay in a hotel? Ride an airplane? Let the plumber in? Do I go to the doctor to check that strange lump or not?

What will be so cruel about this American version of Russian roulette is how unfair it will be. Some people will have no choice but to take the subway or the bus to work. Some people will have to send their kids back to school because they can’t afford to stay home from work. Some bosses will demand that their employees show up to reopen their workplace, but some of those employees may be afraid to come back. Do you fire them? Do they bring a lawsuit against you if you do, or do they go on Twitter and post a picture of how closely together you forced them to work — six inches apart, not six feet?

This is the state of play when you have a president who one minute is responsibly issuing sober guidelines for when and how people should go back to work, and the next minute is telling states that they are responsible for getting the testing, tracking and tracing units that we need in place and then, in the third minute, is inciting people on Twitter to “liberate” their workplaces, cities and beaches — even though none of the conditions are in place to do so safely.

“Liberate”? Think about the use of that word. We were not in jail! We were not doing something wrong! We were doing what our president, governor, mayor, and national epidemic experts told us to do: behave responsibly and shelter in place to break the transmission of this virus.

Stuff that happened on April 19 includes:

I’m not sure if he was the first European to glimpse Australia, or only its eastern coast. Readers can help here.

She was only 14, and ascended the throne four years later, reigning until she was deposed and then executed in 1792.

She was a piece of work. Here’s a note from her Wikipedia bio:

When approached for permission to allow her likeness on The Beatles’ Sgt. Pepper’s Lonely Hearts Club Band album cover, West initially refused, asking “What would I be doing in a Lonely Heart’s Club?” The Beatles wrote her a personal letter declaring themselves great admirers of the star and persuaded her to change her mind.

Here’s a rendition of “Advance Australia Fair”. The words are dire, but the tune is far better than the “Star Spangled Banner”.

Here’s an interview with Bird, perhaps the greatest of all cricket umpires, as he approached 80 years of age. He’s 86 and still with us.

Rivaldo made many great goals, and here’s one of them:

Sharapova’s annoying grunts as she hits the ball have been measured up to 109 decibels in loudness: the volume of a chainsaw or an auto horn 1 meter away. Hear some of grunts and squeals here. Personally, I think grunting should be banned from professional tennis.

Those who rested in piece on April 19 include:

Maynard Smith, or “JMS” as he was known, was a student of J.B.S. Haldane, and I knew him (in fact, I put him up in my house once, whereupon he drank my entire beer supply in several days). He was tremendously accomplished but not at all arrogant. Here’s JMS on biology’s great unsolved problems. If you let the video end, it segues to further videos of JMS (there are 102 in total).

Meawhile in Dobrzyn, Hili has a plan B; Malgorzata explains: “Hili thinks that in the current situation everybody sitting and doing nothing should have a plan B – do something. Which, in her case, means take a nap.”

Hili: I have a plan B.
A: What’s that?
Hili: To start doing something. 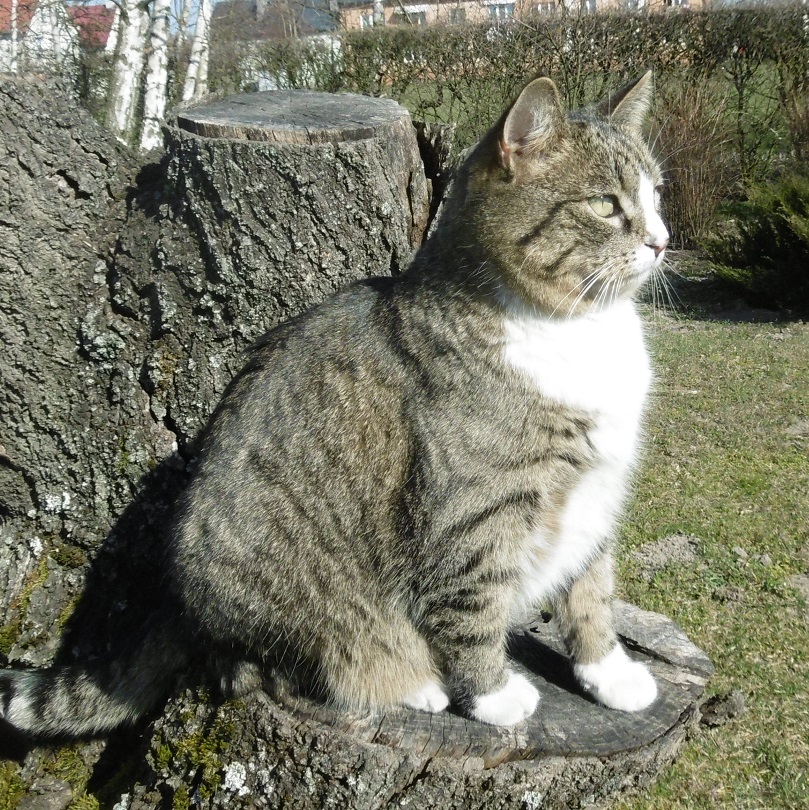 A public Facebook post by Joy Cico Boyer. Horses, fortunately, don’t get Covid-19, but if they did there would be no shortage of masks. 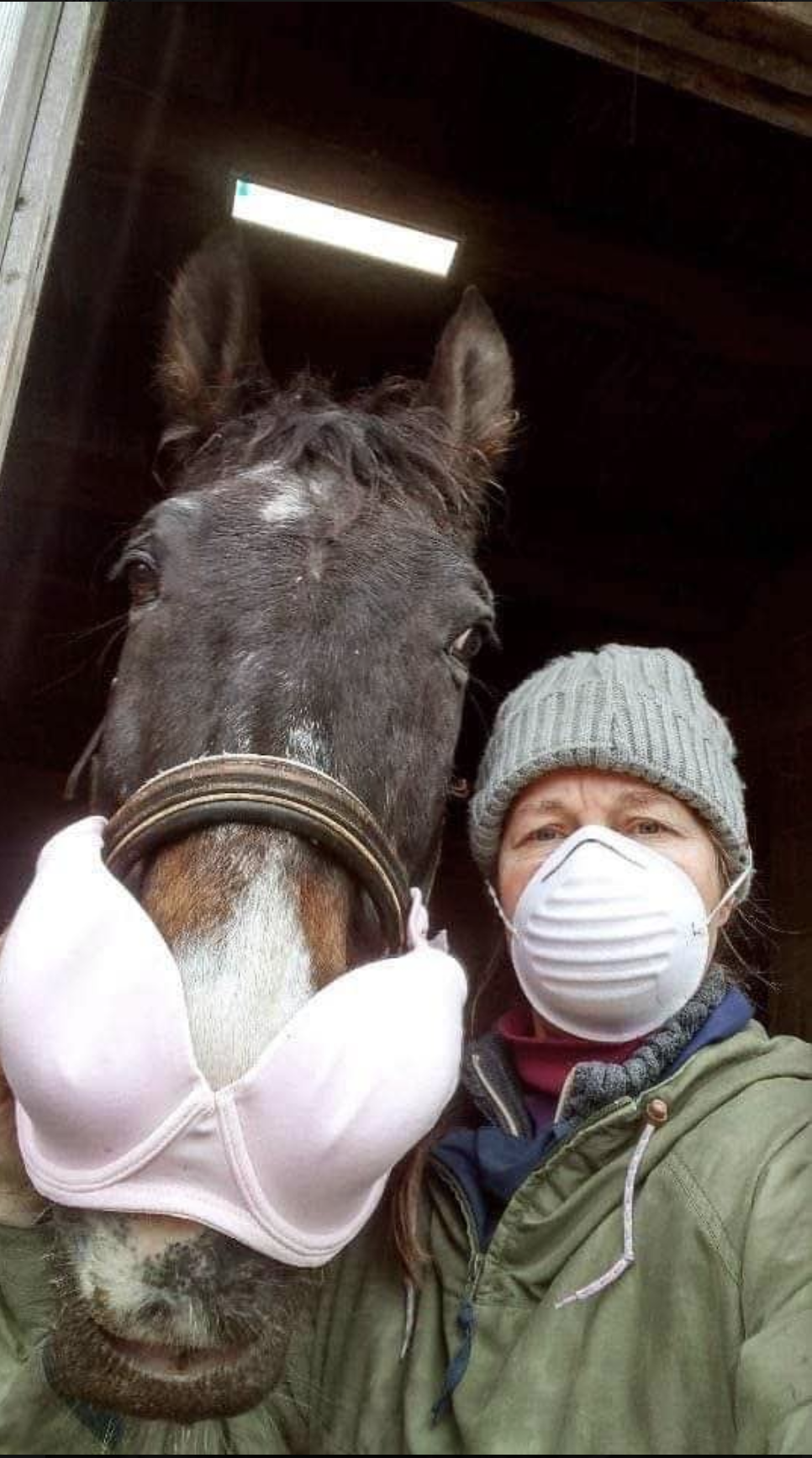 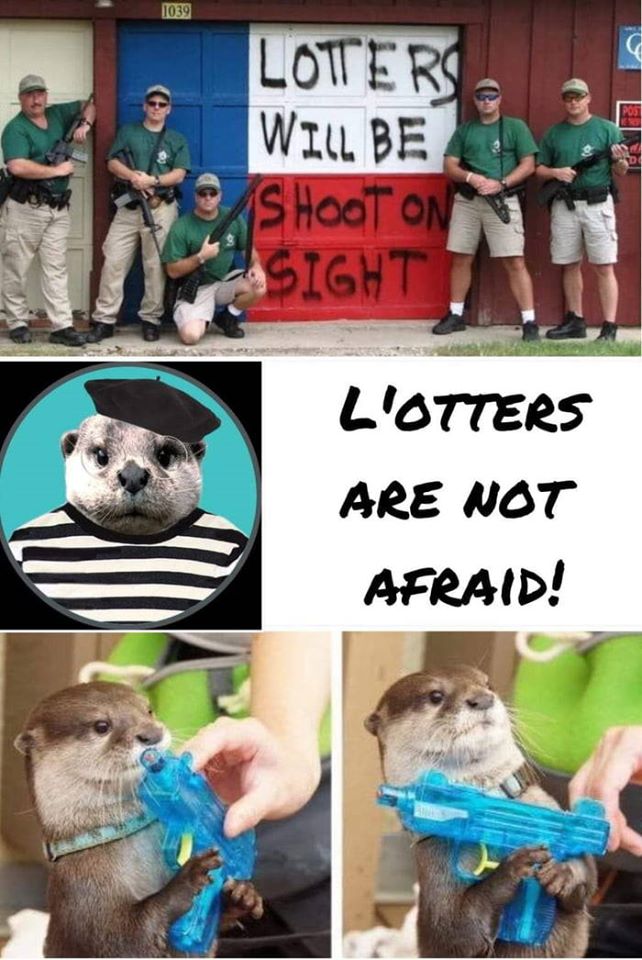 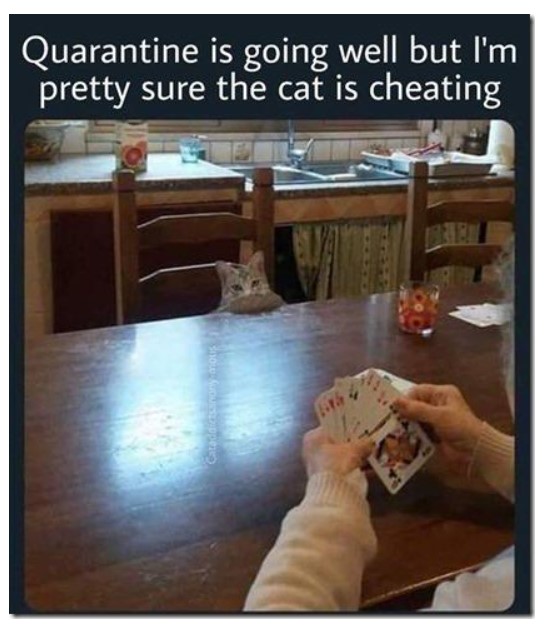 A tweet sent by reader Barry. These animals are so graceful (they’re also known as “giraffe gazelles”), and the male such a gentleman! Read more about them here.

A tweet from Heather Hastie. Man, are these badgers treated well!

Has anyone got a spare blue egg cup? Stolen by Little Humbug never to be seen again 😆 with her Easter egg 😍🐾🐾❤️
Melted fat mixed with peanut butter 😆 pic.twitter.com/z6kIVSxh99

Tweets from Matthew. First, a lovely waterspout. As Wikipedia notes, “Most waterspouts do not suck up water; they are small and weak rotating columns of air over water.

Extraordinary view of a towering #waterspout churning along the coastline of Jbeil, Lebanon today!🌪🇱🇧

This video was sent in by Fares Azar, who pulled off the Jbeil Highway to capture this incredible angle of the spout!#weather #tornado #stormhour #wx pic.twitter.com/KzpMXaCxe1

There’s some sound on this one, though it’s just running water:

WHAT is a Polypterus? Snake? Lizard? Fish?

Part of an ancient lineage, polypterids are fishes with armored scales, spiny dorsal finlets, two lungs, AND some can move on land! pic.twitter.com/gsDjd43Ptr

This is a critically endangered subspecies (not a species), comprising 200 individuals.

A rare sight of the Critically Endangered Arabian Leopard in Oman.

Matthew says he missed three—the first three. The answers are in the thread (or right below the tweet here):