Seriously, isn’t there a way to get Trump out of the Presidency before he does more damage to our Republic? After saying he’d leave it up to the states and their governors to decide when to “open up” parts of America, he’s now doing this:

LIBERATE VIRGINIA, and save your great 2nd Amendment. It is under siege!

Umm. . . is he calling for action with guns in that last tweet?

These are all states with Democratic governors, and he’s urging their residents to rise up against. . . what? Surely the state governments and their rules designed to protect the populace. According to the New York Times, these are all states where conservative Trump supporters are gathering—against shutdown restrictions—to urge a reopening of the economy. You’ve probably seen scenes of Wednesday’s protest in Lansing, Michigan, much of the protestors’ rancor aimed at the state’s Democratic governor, Gretchen Whitmer. No social distancing in the picture below!

From the Detroit Free Press: 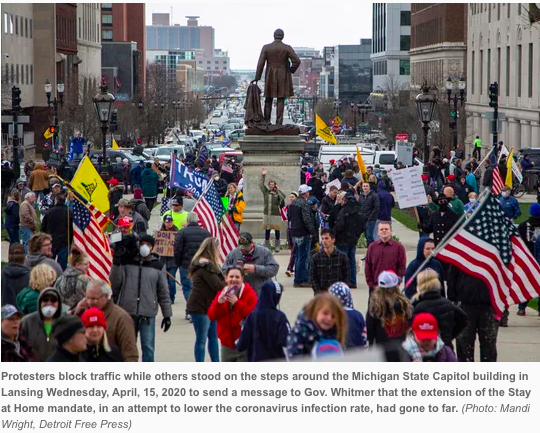 You can argue about how many lives were lost by Trump’s temporizing and hamhanded handling of the pandemic since January, but here he’s urging citizens to overturn the regulations of state governments, opening up states before their governors deem it prudent. In other words, open them up now. And in violation of his recent concession to the governors, itself a violation of his earlier assertion that he was a King Who Had the Power to Do Anything.

I never believed I would see a U.S. President urge insurrections, possibly armed, against legal and justified decrees by the government of states. But it’s happening. And on Twitter, for crying out loud!

Anybody who favors Trump at this point really is deplorable, for the man is palpably insane, lost in his own world of ego in which everyone must fall at his feet and declare him a god-chosen monarch. His narcissism has cost lives, and this could cost more: either through states that open up prematurely, or through the residuum of armed Republican lunatics who are willing to use the Second Amendment in futile attempts to overthrow state governments.

I have no more words. I wish I knew what to do except write ineffectual posts like this and urge the election of Democrats in November.