Okay, one particular reader made a touching and heartfelt plea to retain the Caturday Felids, so I’ll try it for a while. As usual, today we have three items, with bonus lagniappe (that’s a redundancy).

Reader David sent a video and link that, he said, “combine two of your favourite topics, Cats and Ducks.”

In this video (and article below), the family cat appears to have killed a female mallard and dragged it through the catflap, but the mallard is only playing dead! They let it go and it seems fine. But they keep referring to this hen as a “he.” It’s a WOMAN DUCK!

Click on the screenshot to read an article in Metro about this incident; apparently the cat dragged the duck upstairs, though that’s not certain (it could have waddled up):

Two-year-old Slippers managed to pull the bird through the cat flap and drag it up the stairs.

Dad Marcus Elliot-Square, 47, was downstairs getting ready for work at 6.30am when his startled wife Claire phoned him from the landing.

At first it appears the duck is dead — but it suddenly bursts into life and flaps into the bedroom as Claire shrieks in panic.

Marcus, an operations director, opens the window and eventually the lucky duck hops out to freedom.

He said: ‘I was downstairs early doors getting ready for another work day whilst in isolation.

‘I received a phone call from my wife who was upstairs saying that she thought our cat Slippers had caught a duck.

‘Now Slippers has got previous for pigeon rustling and catches on average a mouse every two days.

‘So in light of this I picked up my phone thinking that if this was indeed the case, I needed evidence.

‘I received a phone call from my wife who was upstairs saying that she thought our cat Slippers had caught a duck.

‘Now Slippers has got previous for pigeon rustling and catches on average a mouse every two days.

‘So in light of this I picked up my phone thinking that if this was indeed the case, I needed evidence.

As David wrote, “Personally I would have taken the duck to the vet, but it was quite heartwarming to see it fly off again at the end, as the family says I hope it has ‘a lovely long life and lots of children.’

Here’s the family from Metro: 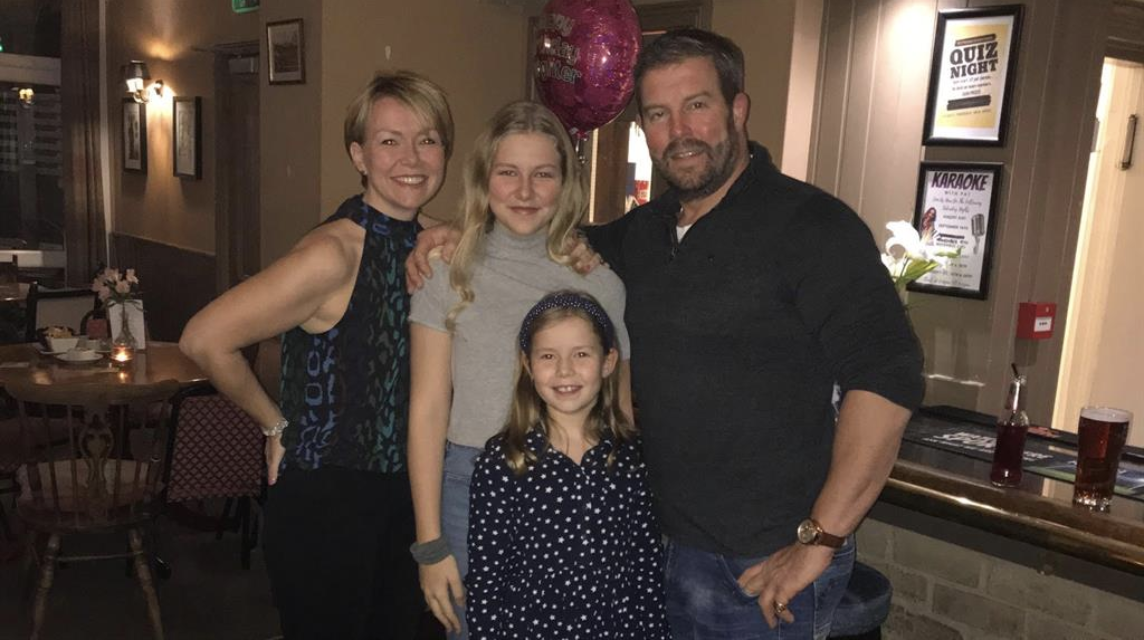 From PopSugar (click on screenshot), we have this story (excerpt below):

Working from home during self-isolation can be hard to begin with. But throw a few pets in there, and well, many more hijinks usually take place. No one quite knows this better than Andrew Stych and his wife, Sheila, who are proud parents of four cats and a pit bull. Recently, Andrew and Sheila had been experiencing some mischief courtesy of their cat, Penelope, so Andrew decided to send a written complaint to his furry friend on behalf of HR to cheer Sheila up.

. . .When pressed for more details via text message, Andrew shared what Penelope has been up to for the last few weeks. “She likes to ‘help’ my wife with her spreadsheets and emails by walking on her laptop keyboard,” he told POPSUGAR. “She actually sent an unfinished email to one of her coworkers.” Yup, that sounds about right!

After getting Penelope to “sign” her name on the document, he showed it to Sheila, who absolutely loved the overly formal warning. “I love it, and it was well-deserved,” she said. “As household supervisor I have no problem putting my signature on it.”

Here’s the letter, “signed” by Penelope: 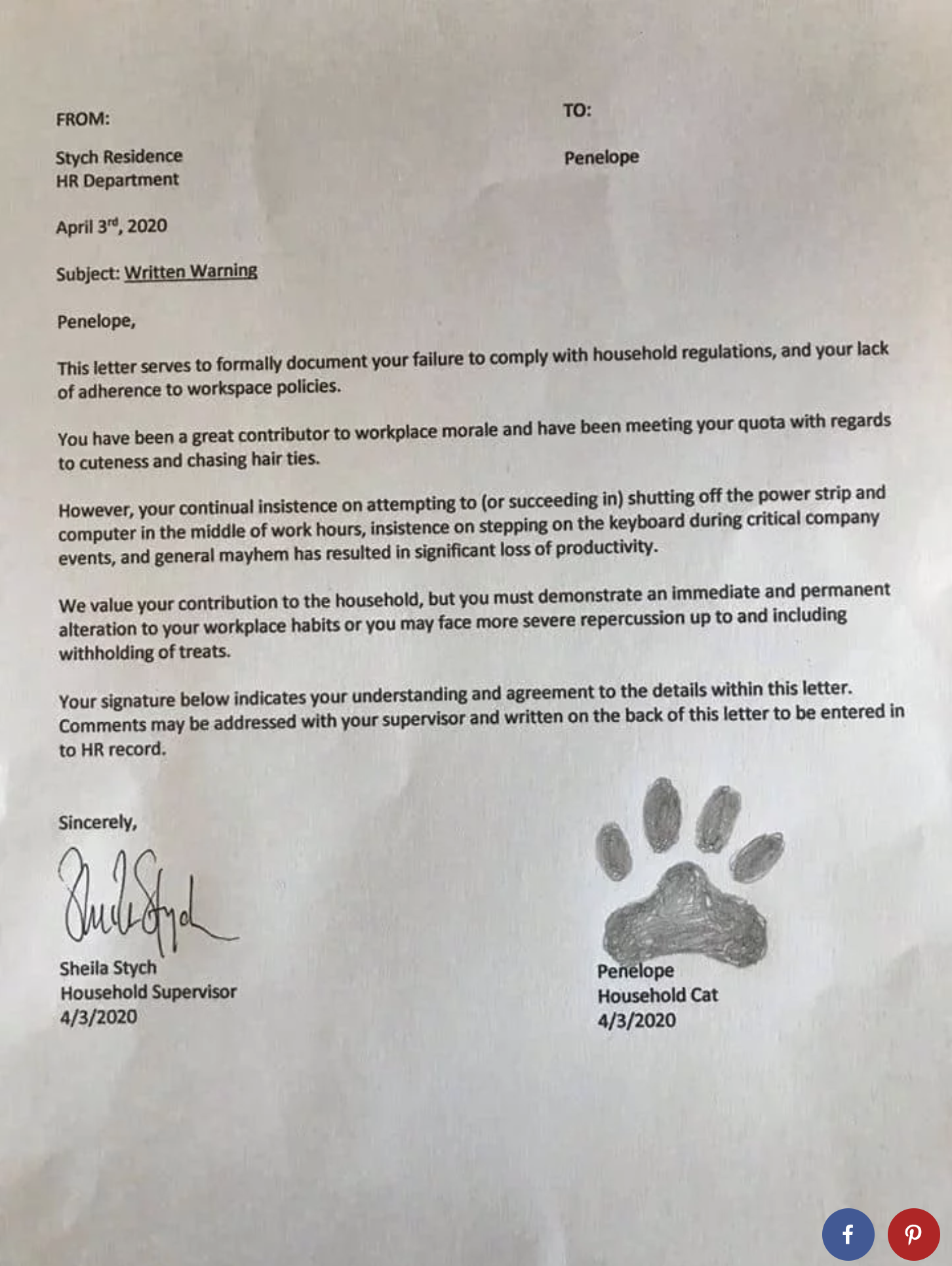 From Animal News we have an obituary for Barney the “cemetery cat” (click on screenshot):

He had an unusual but fulfilling life, as documented in the article:

The cat that wandered into a cemetery 20 years ago and spent his time comforting mourners has been laid to rest having died of old age. Barney the ginger tabby spent his days walking the grounds of a church burial site, consoling those visiting their loved one’s graves.

His death has led to an outpouring of grief from the local community as people paid tribute to this much-loved cat. Grounds keeper Alan Curzon said he has now been laid to rest at the place where he spent his entire life brightening up the lives of hundreds of people during their darkest moments. 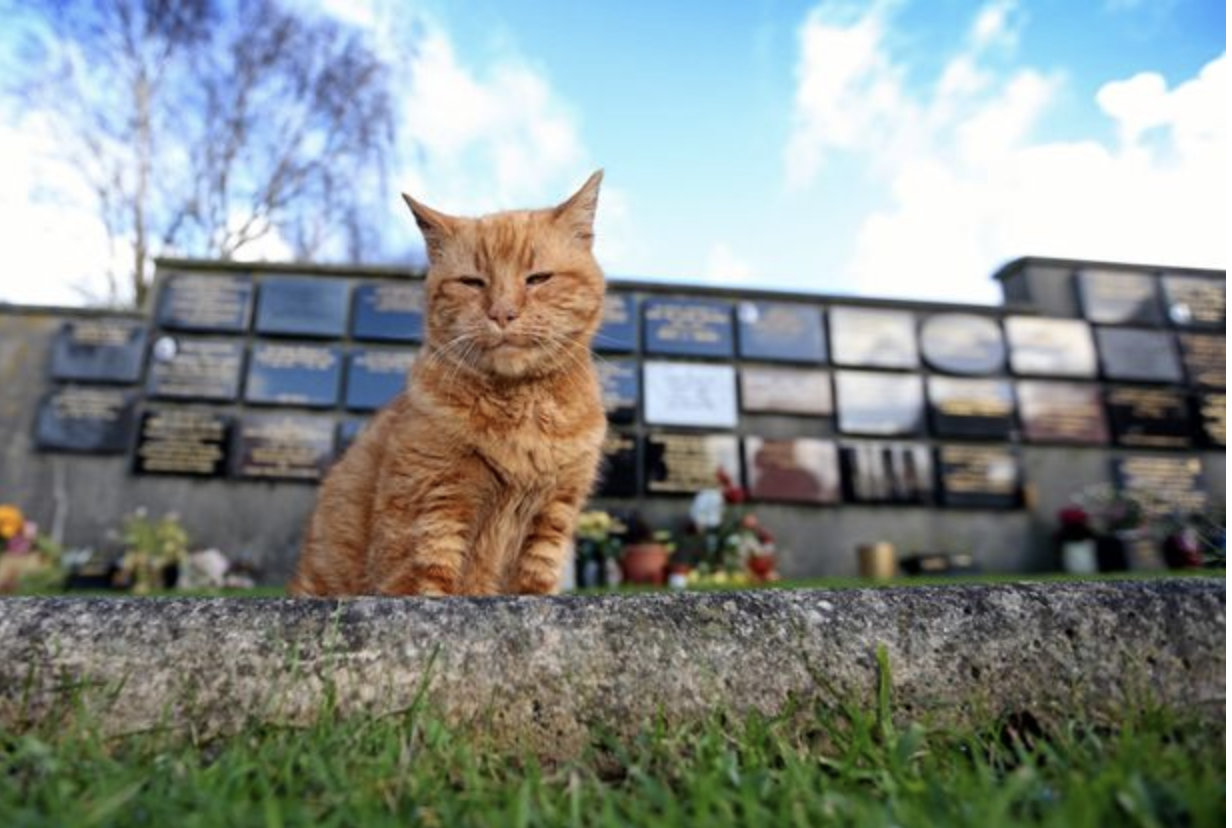 The popular kitty originally lived with his owners next door to the St Sampson’s Cemetery in Guernsey, UK. But when they moved away he kept returning to his previous territory and was eventually re-homed there.

Alan, 63, the cemetery sexton who has helped look after Barney since 1996, said everyone was devastated. He said: “When relatives and friends have suffered the awful loss of someone close to them and go to visit a cemetery they are not in best frame of mind but Barney was always there to cheer them up. For those who entered the cemetery with a heavy heart, he lightened up the experience for them. When people walked through the gates, he often came up to them and brushed against them.” 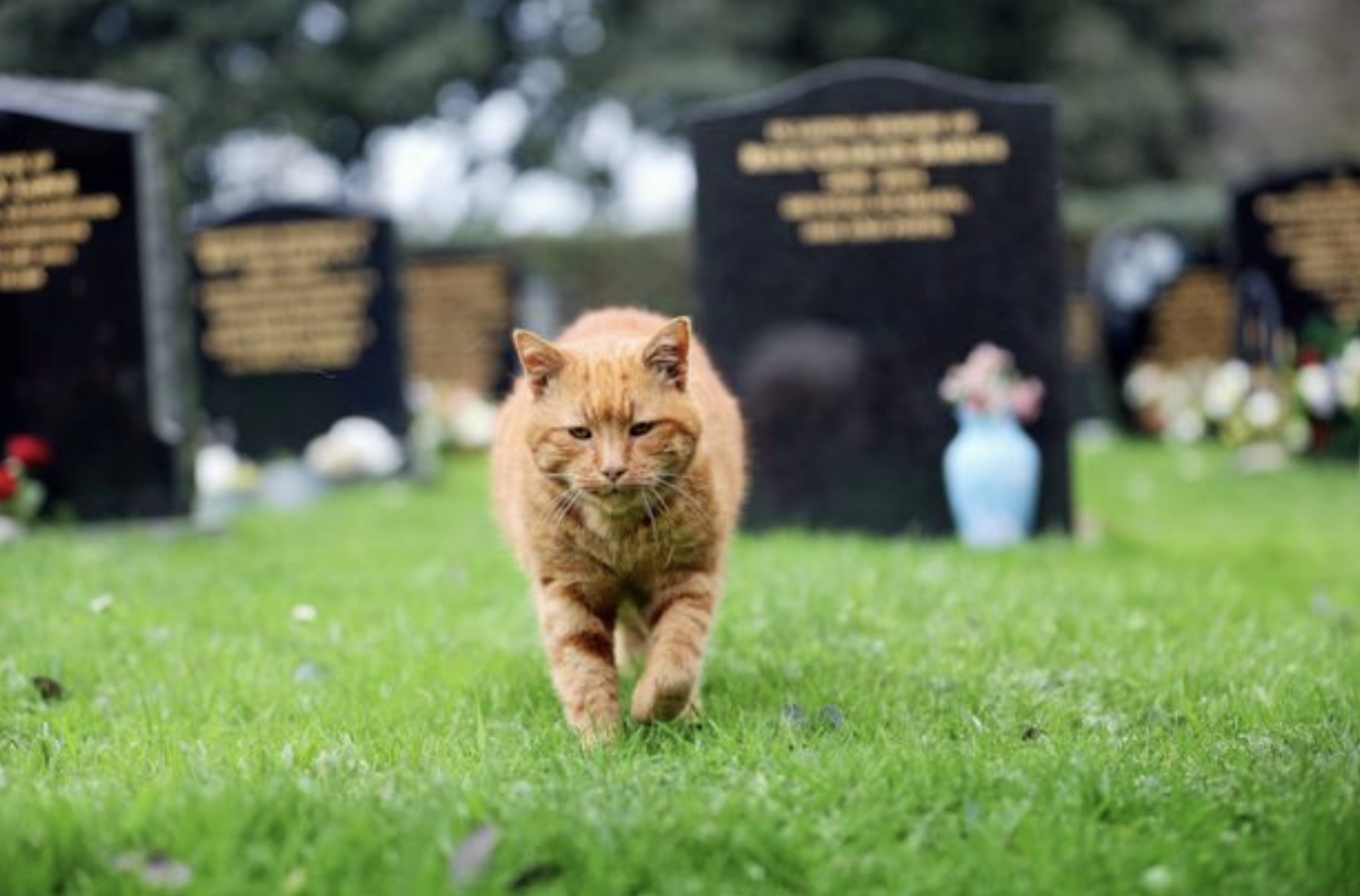 “There was not a bad bone in his body. We are putting a plaque on the wall and a bench and have found a little space for him in the cemetery where he is buried as well.”

Barney was very loved by everyone that knew him and people loved him so much that they brought gifts to Barney during Christmas time. His invaluable support to all those that visited the cemetery is enough to bring tears your eyes. He was a true friend to all, a light in the midst of the shadows of sadness.  He was a true angel. 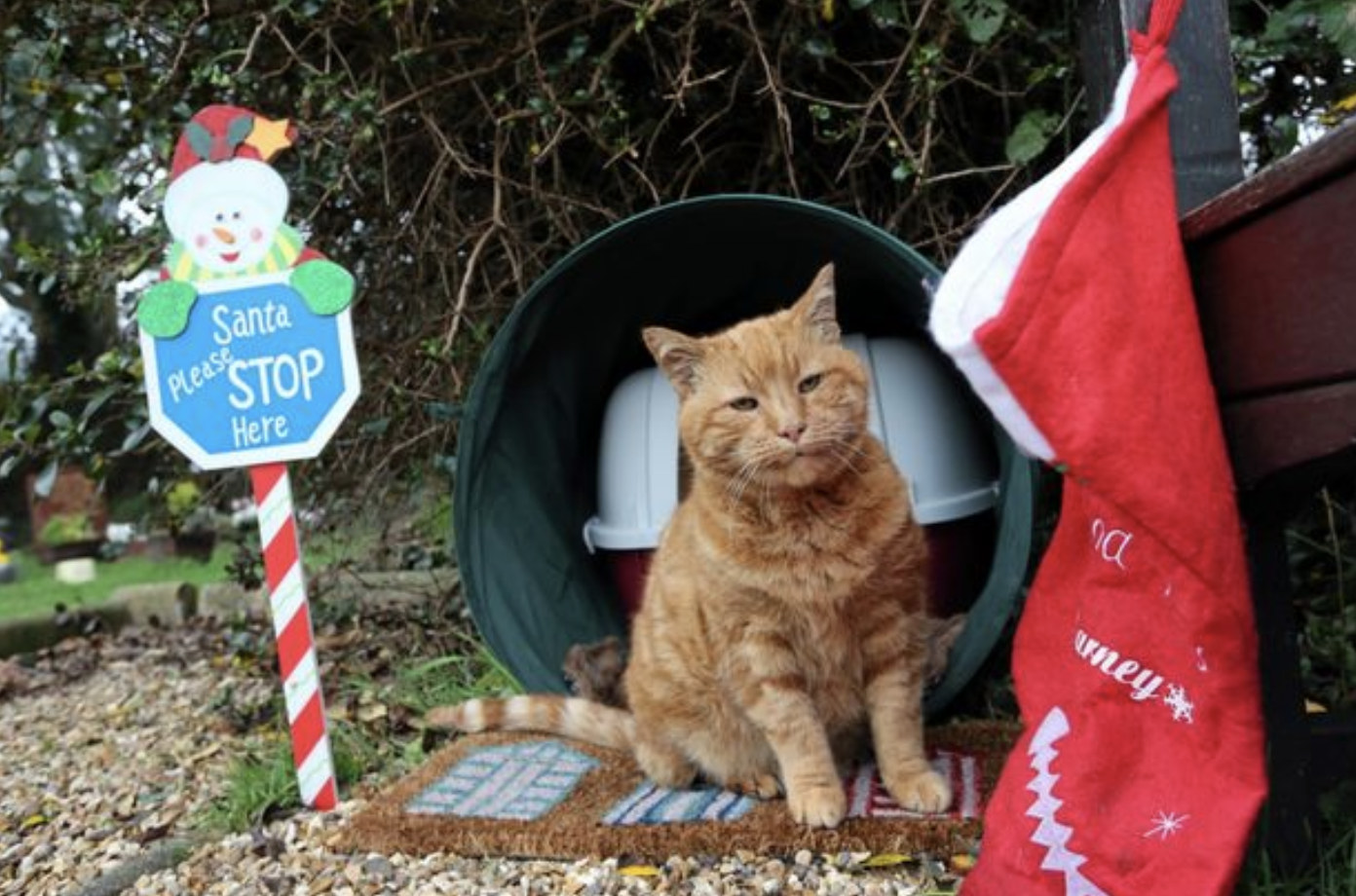 Lagniappe: A MythBusters video in which Adam Savage and sidekick have the job of herding eight cats from a big pen into a little one.  Do you think he succeeds? You’ll have to watch the video to find out.