I’ve written several posts on the mandatory “diversity statements” now required by the University of California, which will soon be required on campuses elsewhere. These statements are used to weed out candidates for academic jobs before their academic credentials are even assessed, and they require candidates to do three things: they must express their philosophy of diversity, they must recount their past efforts to promote diversity, and they must describe their plans to increase diversity at the UC campus where they’re applying.

Just saying you’re in favor of diversity is not enough. You have to have that track record and you have to have a credible plan to promote diversity (“diversity” refers, of course, to gender and racial diversity, not socioeconomic, religious, or political diversity). Asserting that you’re in favor of diversity, and will treat all students as equals, is not sufficient—your application will get tossed. At Berkeley and Santa Cruz, for instance, the applications are scored by committees, not the relevant departments, and you’re given points for each of the three parts. If your points don’t exceed a specified threshhold, your candidacy is stopped in its tracks.

I’ve been opposed to these statements on several grounds, including the insupportable requirement that faculty adhere to a particular ideological position (you cannot, for example, be opposed to affirmative action, or even take Dr. King’s view that someone is to be judged by the content of their character rather than their pigmentation). Further, faculty who have done outreach in other ways besides promoting diversity (e.g., writing popular articles, lecturing on their field to secondary-school students, and so on) get no credit for that, and their applications are discarded. As I wrote in February, while I favor affirmative action, I oppose these ideological purity tests:

So I’ll reiterate that yes, I favor initiatives to increase faculty diversity given the lack of equal opportunity for many minorities. I just don’t think it’s right to mandate “diversity statements”—and, especially, using them as a way to prune out all candidates who aren’t sufficiently on board with the UC ideology (or have no track record of promoting diversity). That simply eliminates candidates, even minority ones, who have outstanding records but haven’t spent a lot of time promoting diversity. Or who have done other sorts of “outreach” activities not involved with diversity itself.

My U of C colleague Brian Leiter, a professor at the Law School and Director of Chicago’s Center for Law, Philosophy & Human Values, has pretty much agreed with me about all of this. He, too, favors affirmative action, but not on the grounds that diversity is an “inherent good”, which is the basis on which the Bakke decision allowing affirmative action was decided by the U.S. Supreme Court. Rather, Leiter favors diversity initiatives as a form of reparation—to help lift up those who were oppressed and thus lost ground in the past—and also to provide role models to buttress and inspire members of minority groups. And I’m pretty much with him on that as well.

About a month ago, Leiter wrote a clear and persuasive argument in the Chronicle of Higher Education that these diversity statement are not only invidious, but illegal. You can read the article for free by clicking on the screenshot below. 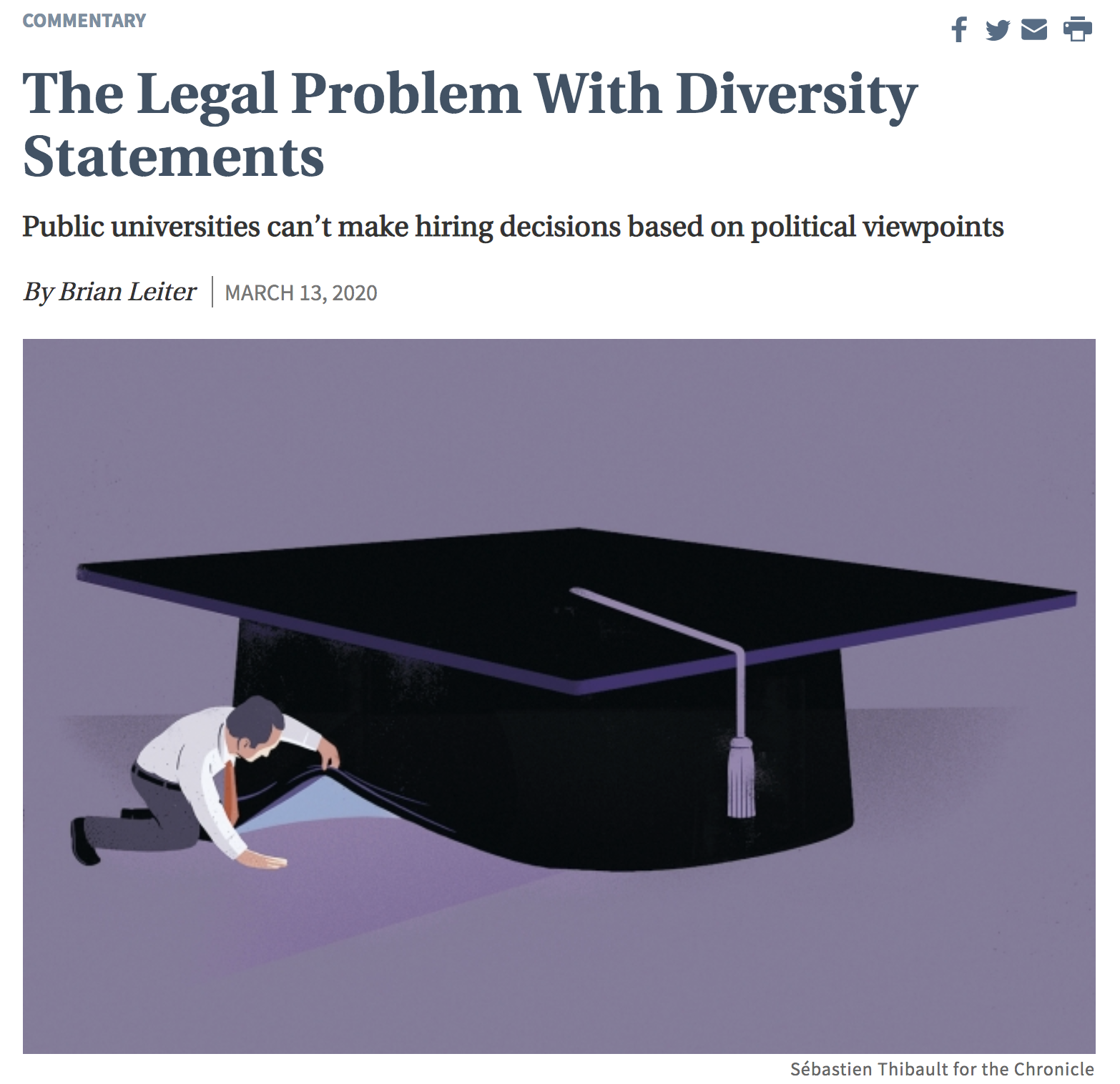 I’ll give a few quotes on Leiter’s legal grounds for opposing these statements:

. . . some universities and departments are using scores on the diversity statement to make the first cuts in faculty searches. That would not be objectionable if it were only a device for weeding out candidates unwilling to work with a diverse student body: The ability to do so obviously goes to the core of a faculty member’s professional duties. The problem is that the new diversity statements go well beyond that, requiring candidates to profess allegiance to a controversial set of moral and political views that have little or no relationship to a faculty member’s pedagogical and scholarly duties.

The University of California at Berkeley has made its criteria for evaluating diversity statements public, and they bear out Thompson’s analogy to loyalty oaths. A job candidate will get a disqualifying score if he or she “defines diversity only in terms of different areas of study or different nationalities, but doesn’t discuss gender or ethnicity/race” or if she or he discounts “the importance of diversity.”

Why these statements are illegal (I believe they are illegal, and also expect that they’ll be challenged in the courts):

Ought a state university ask candidates to sign on to a particular vision of diversity in higher education as a condition of employment? Everyone presumably agrees that a public university should not ask a faculty candidate to affirm allegiance to a particular political party, but why not? In a free and democratic society, citizens should not be penalized in the workplace for their lawful political opinions and expression. The private sector often violates this moral principle, but the courts have required the public sector to honor it, with only limited exceptions. Looking at the constitutional treatment of these issues sheds light on the ethical issues at stake in mandatory diversity statements.

American law has long disfavored speech compelled by the government. In 1943, the Supreme Court struck down compulsory pledge of allegiance to the flag in public schools. Writing for the majority in West Virginia State Board of Education v. Barnette, Justice Robert H. Jackson declared: “To sustain the compulsory flag salute we are required to say that a Bill of Rights which guards the individual’s right to speak his own mind, left it open to public authorities to compel him to utter what is not in his mind.”

The McCarthy-era loyalty oaths in California were finally held unconstitutional by the Supreme Court of California in 1967, not on compelled- speech grounds, but rather because they violated the right of citizens to “freedom of association” by proscribing “membership, past, present, or future, in any party or organization which advocates the overthrow of the government by force, violence, or other unlawful means,” even when a member does not share the organization’s aims or know of them. Earlier in 1967, the U.S. Supreme Court struck down New York’s similar “loyalty oath” as unconstitutionally vague and thus as posing a threat to freedom of expression in the classroom and outside it: “The First Amendment … does not tolerate laws that cast a pall of orthodoxy over the classroom” the Court declared.

Mandatory diversity statements do not affect freedom of association, but they arguably “cast a pall of orthodoxy over the classroom,” at least those classrooms where professors might want to scrutinize justifications for affirmative action, for example. Even though there is nothing in the Berkeley policies to suggest the university would restrict a faculty member’s teaching, by mandating a particular vision of diversity and its value as a condition of employment, the policy does claim this is the “orthodox” view in the California system.

The latter concern comes closer to the real moral and legal problem: In the language of First Amendment jurisprudence, these diversity statements constitute “viewpoint discrimination.” Government cannot, excluding a few exceptions such as political appointments, base a hiring decision on the speaker’s political viewpoint. Wagner v. Jones (2011) offers a good illustration. Wagner, a conservative who opposes abortion, claimed she was passed over for a job teaching legal research and writing at the University of Iowa because of her political views. The trial court initially granted Iowa’s motion to dismiss, but the U.S. Court of Appeals for the Eighth Circuit correctly reversed that decision. As the court put it, “The state can neither directly nor indirectly interfere with an employee’s or potential employee’s rights to association and belief.”

Again, Leiter is an advocate of racial justice, but doesn’t think that whether you get hired at a state university requires that you adhere to specified views about diversity, nor have engaged in the past in efforts to increase it. Leiter is also a Marxist, and as far as I understand his views, he sees socioeconomic factors as more important than “racialism” as a cause of inequities. Nevertheless, because racism, which I think Leiter sees as an outcome of slavery—a post facto justification—rather than its cause, has palpably harmed people, he favors a form of affirmative action. So do I.