Today’s J&M was prompted by the article below which says, among many other things, that some radical Muslims and fundamentalist Christians do still think that way (but we probably knew that, right?):

The article, from the Economist (and, unusually, free), discusses how religions are grappling with the demands of science, which for the moment requires the suspension of group worship, with their need for group worship as dictated by their faith. A short excerpt:

Covid-19 has not generally widened fissures between faiths. Rather, it has widened those within the ranks of all great religions. They were already squabbling over how far old beliefs could live with modern views of Earth’s origin. The pandemic exacerbates the rift between science-defiers and those who respect the laboratory.

. . . In the end, the survival of religions may depend on their finding a way of explaining to followers, in their own terms, why their spiritual duty now lies in suspending rites hitherto regarded as vital. As Shadi Hamid of the Brookings Institution, a think-tank, notes, Muslim jurisprudence has accepted that human survival can trump other norms: a Muslim can eat forbidden pork rather than starve. For liberal-minded Jews, the ideal of tikkun olam, or repairing the world, is higher than rules governing prayer or diet.

It’s a good summary of faith versus fact, and fact—in the form of the virus—will win. As Feynman said, Mother Nature can’t be fooled.

In fact, the article doesn’t say anything about the virus being man-made or a product of Bill Gates’s scheme, but the “explanation” offered by the boys below is just as ridiculous. (Note that Mo is halfway to wearing a burqa and is already effectively in niquab. 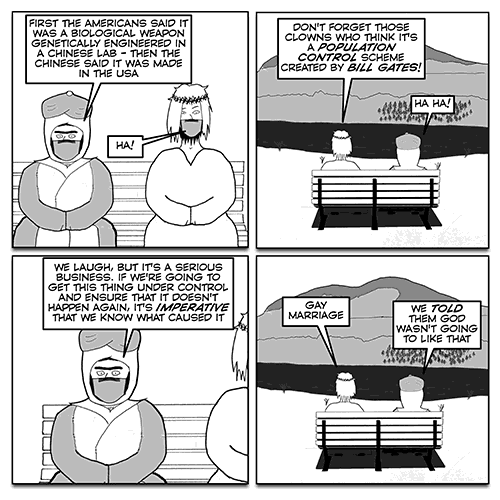