It seems that some U.S. students are using the pandemic emergency to their own advantage. As I’ve written before, students at several schools have urged changes in the methods grading during this semester of “remote learning”. That’s not automatically something to be rejected—except in the cases where students are requesting that everbody “pass” and that the “fail” part of “pass/fail” be eliminated (this is the subject of a petition at Yale, as well as requests from students at Vassar and, I’m sad to say, my alma mater, The College of William & Mary). Even worse, some students simply want everyone to be given A or A-: the two highest grades. This is called the “double A model”, and has been urged by students at Harvard and the University of Texas, As far as I know, no college has yet acceded to either of these demands, and good for them.

Here’s another example of students leveraging the current crisis in their favor. Harvard Law Students are asking to get their license without having to take the bar exam, an exam typically taken in July after students graduate from law school, and for which they prepare arduously and independently. (There are exceptions: according to Wikipedia, “Each state controls when it administers its bar exam. Because the MBE [multistate bar examination] is a standardized test, it must be administered on the same day across the country. That day occurs twice a year as the last Wednesday in July and the last Wednesday in February.” And some states don’t adhere to the double date.)

Now the law students don’t want to bother with that exam, at least at Harvard. Here’s an article from the Harvard Crimson about the issue (click on the screenshot). I find the student initiative distasteful because they are dragging in identity politics to justify their request, and in a way that seems self-serving rather than societally useful. 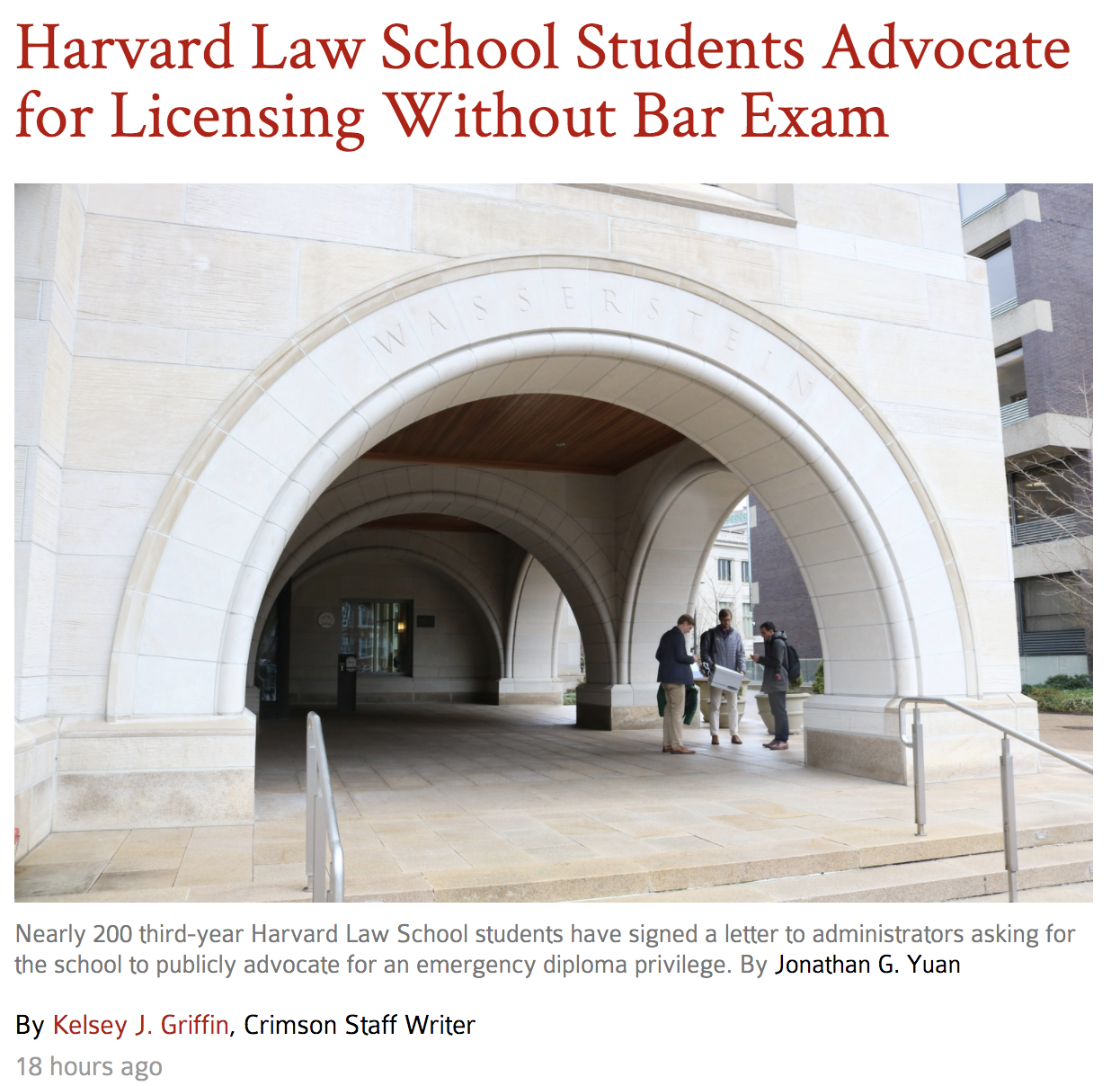 You don’t get a license to practice law without passing the bar exam, and yes, several states have already postponed the exam in light of the crisis. But that’s not enough; Harvard Law students want the exam waived completely:

. . .The Supreme Judicial Court of Massachusetts announced Monday it would postpone its July 28 and 29 exam until an undetermined date in the fall.

But the Law School students’ letter argues that merely postponing the bar exam will jeopardize the employment opportunities and financial security of graduates.

“Most HLS graduates planned to begin working with employers starting late Summer or Fall 2020,” it reads. “If state bar exams continue to be postponed, it is unclear if students will begin working, as planned.”

I doubt it. I’m sure law firms and other employers will allow the students to do law-related work that doesn’t require licensing until they pass the postponed exam a couple of months after it was planned.

And then they bring in identity politics, saying that unless the bar exam is waived completely, not only will marginalized students suffer disproportionately, but the mental health of all students will be jeopardized and that the newly minted but license-less lawyers wouldn’t be able to help the oppressed people hurt by the pandemic.  The Crimson quotes one author of the letter:

[Donna] Saadati-Soto said students who can secure employment before the postponed exam might have to decide whether to work full-time or study for the exam full-time — a decision she thinks would eliminate traditionally marginalized students from the legal profession.

“Folks that don’t have the financial security to be able to just quit their job and study for the bar at any moment — they might choose to forego the state bar,” she said. “That means low-income students, immigrant students, folks of color are the ones that are going to be more likely to have to forgo taking or studying a later exam because they’re going to be needing to work to provide for themselves and their family.”

First of all, any “marginalized” student who got into and graduates from Harvard Law School is automatically privileged (or “de-marginalized”), for Harvard is recognized as one of the best—if not the best—law schools in America. Further, graduates of color will be snapped up instantly by employers who want diversity, especially if they carry a Harvard Law School diploma. And seriously, does Saadati-Soto think that a student who graduated from Harvard Law won’t do everything they can to get a job in law, including taking a few extra months to study for the bar?

[Saadati-Soto] also said that the legal profession currently faces a mental health crisis, and having to take the bar exam could exacerbate the issue by adding unnecessary financial and academic stress in the midst of a global pandemic.

I wonder if that “mental health crisis in the legal profession” (one of which I was unaware; is it real?), comes from there being too many lawyers? But let’s pass on to what really ticks me off about this letter: its claim that social justice is best served by waiving the bar exam:

The letter argues that the huge numbers of people impacted by COVID-19 require that as many lawyers as possible enter the workforce to advocate for struggling small businesses, recently unemployed individuals, and families facing eviction.

It also alleges the country could need more lawyers to continue providing criminal defense and advocating on behalf of working people and detained immigrants — a need it claims can only be fulfilled if law school graduates are granted automatic admission to the Bar.

“We cannot ignore matters of due process and deprivations of individual liberty, even in times of novel national crises,” the letter reads. “We the undersigned request that Harvard Law School recognize the imminent need for legal advocates and take the most humane, public-health conscious, and ethical approach.”

This is transparently self-serving given that not all of the “freed” lawyers will work on social-justice issues. How do they know that postponing the bar exam will affect social justice in these ways? And, don’t forget, it will also beef up the number of corporate lawyers, financial lawyers, and the many lawyers who work in the service of capitalism. If they take this tactic, why aren’t they arguing for eliminating the bar exam only for those who have job offers in social-justice positions?

This argument, of course, doesn’t just apply to Harvard, but to law students throughout the U.S., and can be used as a reason to completely eliminate the bar exam for all students graduating this year. The letter doesn’t mention this. God bless the child that’s got his own.

I have no sympathy for these students, and am revolted by their appeal to social justice as a way to leverage their request, for this allows them to argue that if the request is refused, those who do so are racists who don’t care about the marginalized, immigrants, or small businesses. But how do you ensure quality lawyers without a bar exam?

In fact, everyone about to finish a degree will experience disruption of some sort. I don’t see that lawyers are anything special in the current situation. But they’re good at pretending they are!

But health professionals are, and some medical schools are graduating their students early to release a workforce to combat the pandemic, as well as delaying (but not eliminating) the complex testing process needed to get a medical license (see here and here). I find this sensible and useful—much more useful than unleashing a bunch of unlicensed Harvard lawyers on the world. Note, too, that medical students are NOT demanding that the licensing exams be waived, even though they could use the same arguments as the Harvard Law students.

I wouldn’t want to be treated by a doctor that was unlicensed, nor would I want to hire a lawyer who never passed the state bar exam and therefore wasn’t licensed to practice.

50 thoughts on “Harvard Law students want to get their licenses without having to take the bar exam (coronavirus exemption!)”