We often forget that many countries still have laws on the books against blasphemy, i.e., insulting religion. Some such countries are surprising as we’d consider them “progressive” in many ways. As I wrote in my foreword to the new Jesus and Mo collection:

. . . despite the value of constructive blasphemy, 69 of the world’s 195 countries have laws on the books against the act, though in places the laws are vestigial and unenforced relics of an earlier time. But you can still be fined for criticizing religion in Italy, Brazil, Switzerland, Austria, Finland, and the Philippines, jailed in Germany, Poland, El Salvador, India, Finland, Ireland, India, Turkey, Morocco, and Algeria, and put to death in Saudi Arabia, Yemen, Afghanistan, Iran, and Pakistan. That doesn’t count places where sharia courts can pronounce death sentences not enshrined in civil law, nor acts of murder committed by offended believers in countries like the Netherlands.

How did I forget Spain in the second sentence? In fact, Spain not only has blasphemy laws on the books, but tries to enforce them. As Wikipedia notes in its article on “blasphemy laws”:

The article 525 of the penal law in Spain considers “vilification” of religious “feelings”, “dogmas”, “beliefs” or “rituals”. This extension to “dogmas” and “beliefs” makes it very close to a blasphemy law in practice, depending on the interpretation of the judge.

For instance, in 2012 it was used to prosecute a famous artist, Javier Krahe, for a scene (shot 34 years ago, and lasting just 54 seconds) in a documentary about him. He was discharged the same year. [JAC: “discharged” means “found not guilty”).

In 2018, following the case of Willy Toledo and three feminist protesters accused of blasphemy, the governing PSOE and supportive party Unidas Podemos pledged an end to the “medieval laws on offending religious sentiments and insult to the Crown“. Legislation was suspended following the announcement of the 2019 Spanish general election. The government and its allies were subsequently returned to power, which means the proposals will now likely return to the national parliament.

And so on to the present trial, that of Spanish actor Guillermo Toledo, the “Willy Toledo” of the entry above.  Reader Dom informs me that after having been arrested last year for blasphemy, Toledo is now undergoing a “private prosecution”, and that’s what this clip, in Spanish, states (if I’m wrong, let me know). Dom also reports that there was just a clip on the BBC news about this, but he can’t find it online.

To see what Toledo’s “crime” was, we have to go to El País and The Daily Mail (click on screenshots), which reported when he was first arrested in 2018: 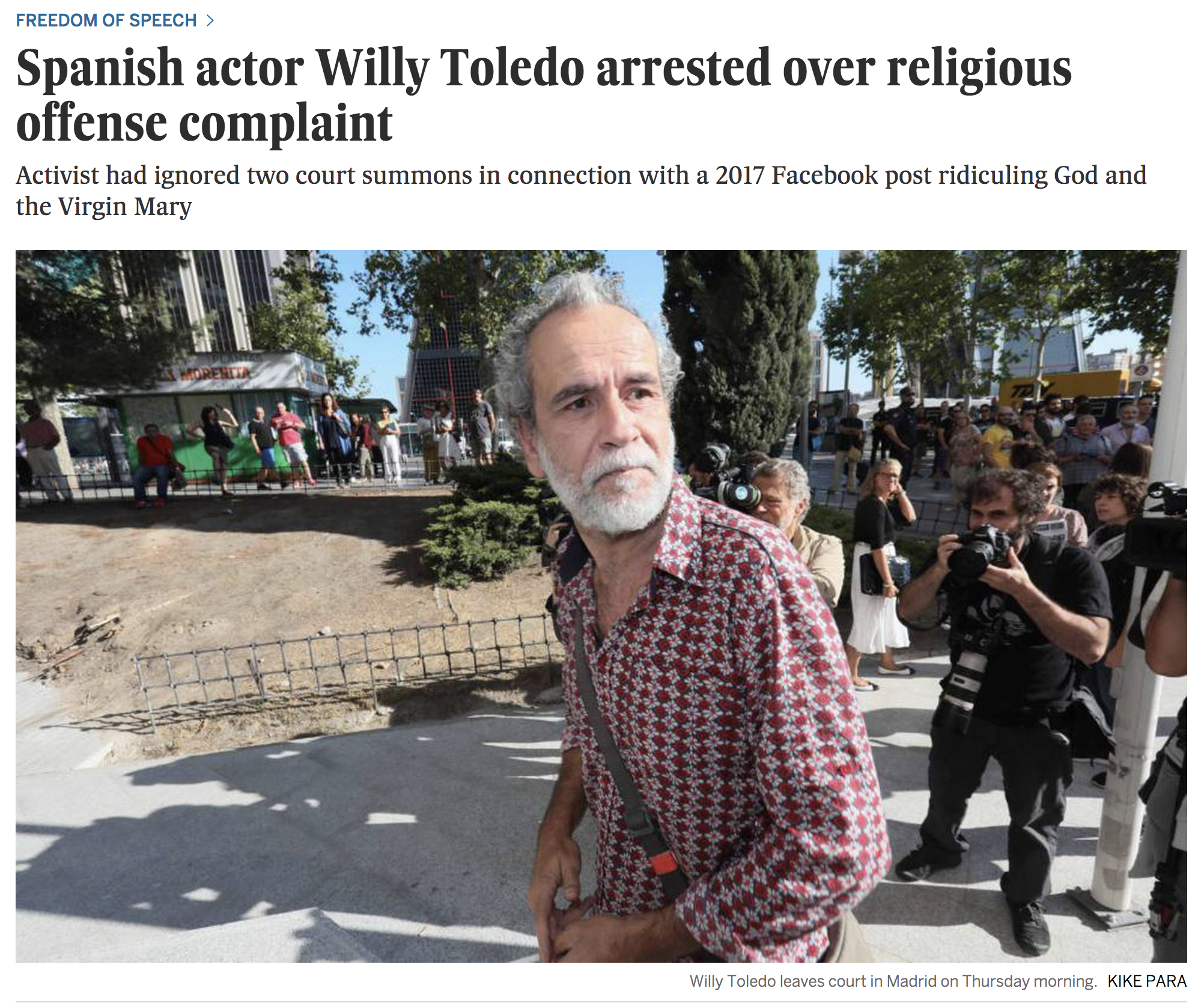 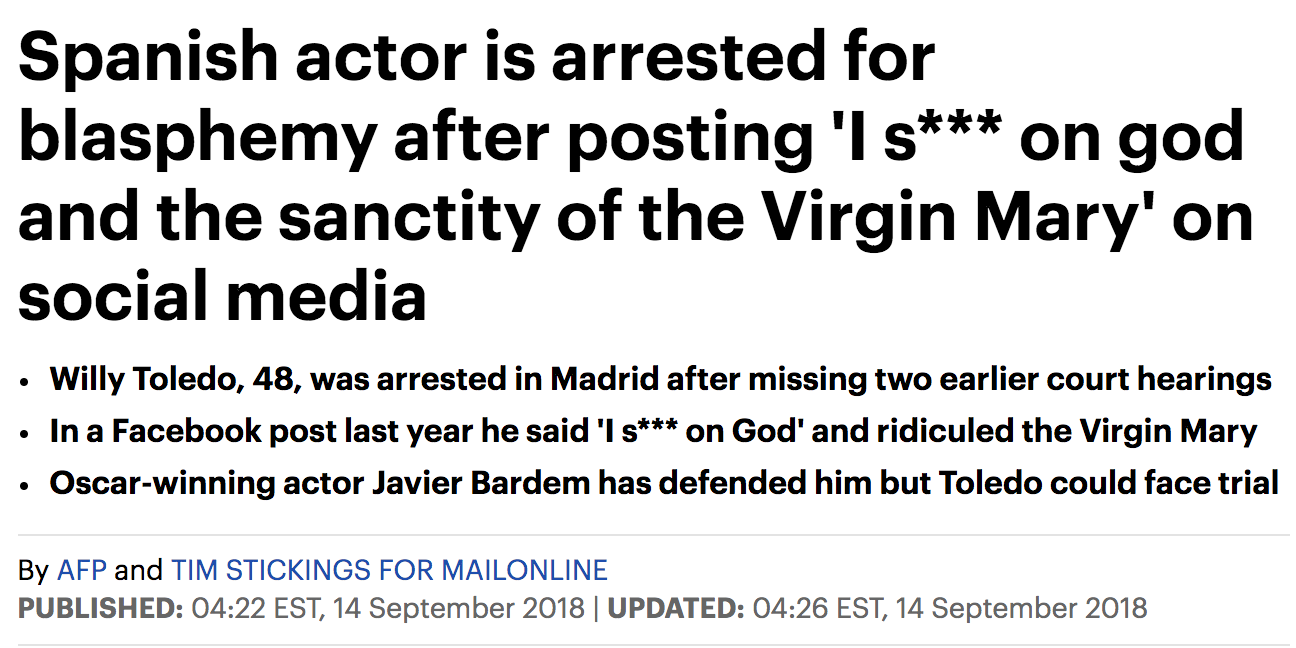 What on earth did Willy do? A previous article in El País reports that he insulted not just God, but the Virgin Mary:

The origin of the case lies with a Facebook post that the actor and activist published regarding a court case relating to three women in Seville who organized a satirical religious-style procession, which, in place of an icon from the Catholic Church, featured an icon of female genitalia.

In his comments about the fact that the case had reached the courts, Toledo wrote: “I shit on God and have enough shit left over to shit on the dogma of the saintliness and virginity of the Virgin Mary. This country is unbearably shameful. I’m disgusted. Go fuck yourselves.”

The expression “shit on God” (cagarse en Dios) is often used by Spaniards in everyday discourse, along with a number of variations, many of them with other religious references.

. . .These comments drew a legal complaint from the Spanish Association of Christian Lawyers on the basis that Toledo had offended their religious feelings.

But is such a thing punishable under Spanish law? Lawyer Borja Adsuara explains that the lawsuit has to be admitted by the court, given that the offense does indeed figure in Spain’s criminal code. “[The article] is wide-ranging enough that it doesn’t just include the Catholic religion, but also humiliation and ridicule of atheists for being atheists. Looking at it another way, the offense against religious feelings can be interpreted as a crime of intolerance of other people’s religious beliefs,” Adsuara tells Verne via a telephone interview.

According to the Daily Fail,

“The case stems from a July 2017 Facebook message in which he defended three women charged with blasphemy for staging a mock-religious procession wielding a giant vagina.  In his post Toledo said: ‘I s*** on God, and I have enough s*** left over to s*** on the dogma of the sanctity and virginity of the Virgin Mary.  ‘This country is unbearably shameful. I’m disgusted.’

He posted this message shortly after the beginning of a trial in Seville against three women who had paraded a large model of a vagina around the city as though it were an Easter religious procession. The women called this event “the procession of the Insubordinate Pussy.”

The Spanish Association of Christian Lawyers filed a complaint against Toledo “for shitting on the dogma, and because his words were an offense against religious sentiment,” said the group’s president, Polonia Castellanos, adding that this is a publicity stunt by Toledo because everyone has the obligation to appear in court when summoned. 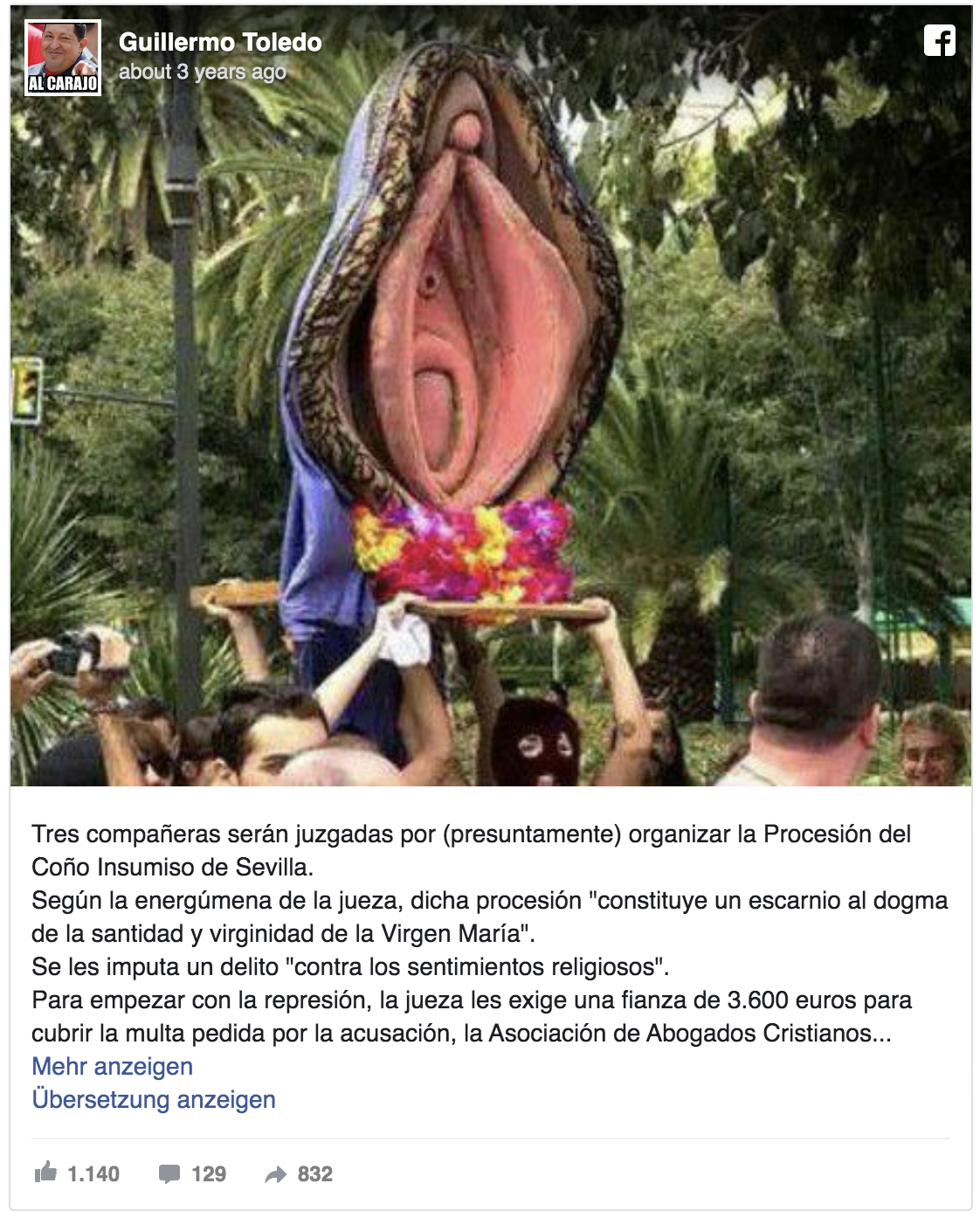 It doesn’t look as if Toledo will go to jail for this, because, according to El País, the “blasphemy law”, Article 525, specifies that punishment is a monetary fine. Curiously, though, if you look up the Spanish Criminal Code, which appears in English in entirety here, you find this:

What on earth is “a fine from eight to twelve months”? This implies that there could be a jail sentence as well, but I’ll count on readers to clarify this. Note that you can get penalized for disparaging atheists as well! Well, at least the law is even-handed, but I’d like someone to prosecute a believer—or even the Catholic Church—for disparaging atheists. It’ll be a cold day in Seville when that happens!

Blasphemy laws are antiquated—no part of an enlightened country. You should be able to say what you want about religion. After all, does it pick your pocket or break your bones? Nope. All it supposedly does is hurt the feelings and bruise the delusions of believers.

Let’s hope the Spanish government uses this case to overturn the blasphemy laws, as Ireland just did. And let’s also hope that Toledo goes free.