I’m still a bit under the weather with an incipient cold, but I’m taking zinc lozenges, which do have some science behind them supporting the claim that zinc shortens the duration and severity of colds. At any rate, since I’ve used them I haven’t had a full-on cold for several years. (A confounding factor: I also wash my hands a lot more.) All this is by way of explaining why I don’t have the energy to brain today.

But I will call your attention to three articles on evolutionary psychology that you may want to read.

About 15 years ago, I was known as a critic of evolutionary psychology, mainly because, along with Andrew Berry, I went after what I saw as bad science promulgated in a book about rape being an adaptation (see also here; copy of my New Republic piece available through judicious inquiry). In those pieces, I made a few disparaging comments about the weakness of evolutionary psychology in general, and so we were off to the races, with radio shows and newspapers all wanting to interview me about rape and evoutionary psychology.

Since then I’ve modified my views about evolutionary psychology, mainly because I’ve tried to educate myself about the discipline. Yes, it’s often a purview of adaptive storytelling, but it’s not all like that; and the field has not only matured, but come up with testable hypothesis about the evolutionary roots of human behaviors, including parental care and sexual behavior. I won’t get into all this today, but you can see an excellent critique of evolutionary-psychology denialism in Steve Piner’s book The Blank Slate.

Now I’ve become somewhat of a critic of the critics, for opposition to evolutionary psychology is often motivated more by ideology than by purely scientific considerations. Blank-slateism is the default position of many on the Left, who simply try to deny science if it’s ideologically inconvenient. That includes not just evolutionary psychology, which has been characterized by some as a completely worthless field, but also any kind of sex difference, or, indeed, the absence of discrete sexes themselves.

The idea that evolutionary psychology is scientifically bankrupt baffles me. If we’re willing to accept that, say, differences between male and female bodies reflects selection in our ancestors, why shouldn’t differences in our behaviors and psychologies also reflect that kind of selection? Yes, I know that there’s culture that affects behavior, and that we shouldn’t blithely assume that every difference we see in mentation reflects natural selection in the past (I’m not that dumb), but there are some hypotheses, like the profligate sexual desires of males versus the choosiness of females, that are not only repeatable, but predicted from our biology and, what’s more, observed in other animals. It would be a remarkable coincidence indeed if such differences between the sexes were evolutionary in other species, but purely the result of socialization in H. sapiens—and yet the behaviors were similar.

But I digress, and am a bit feverish. Here are three reads for you today, the first being this good article from last August in Areo.The author is Laith al-Shawaf, an assistant professor of psychology at the University of Colorado Colorado Springs.  It’s not ideological, but simply collects the main misconceptions and then attempts to refute them (largely successfully, I might add). 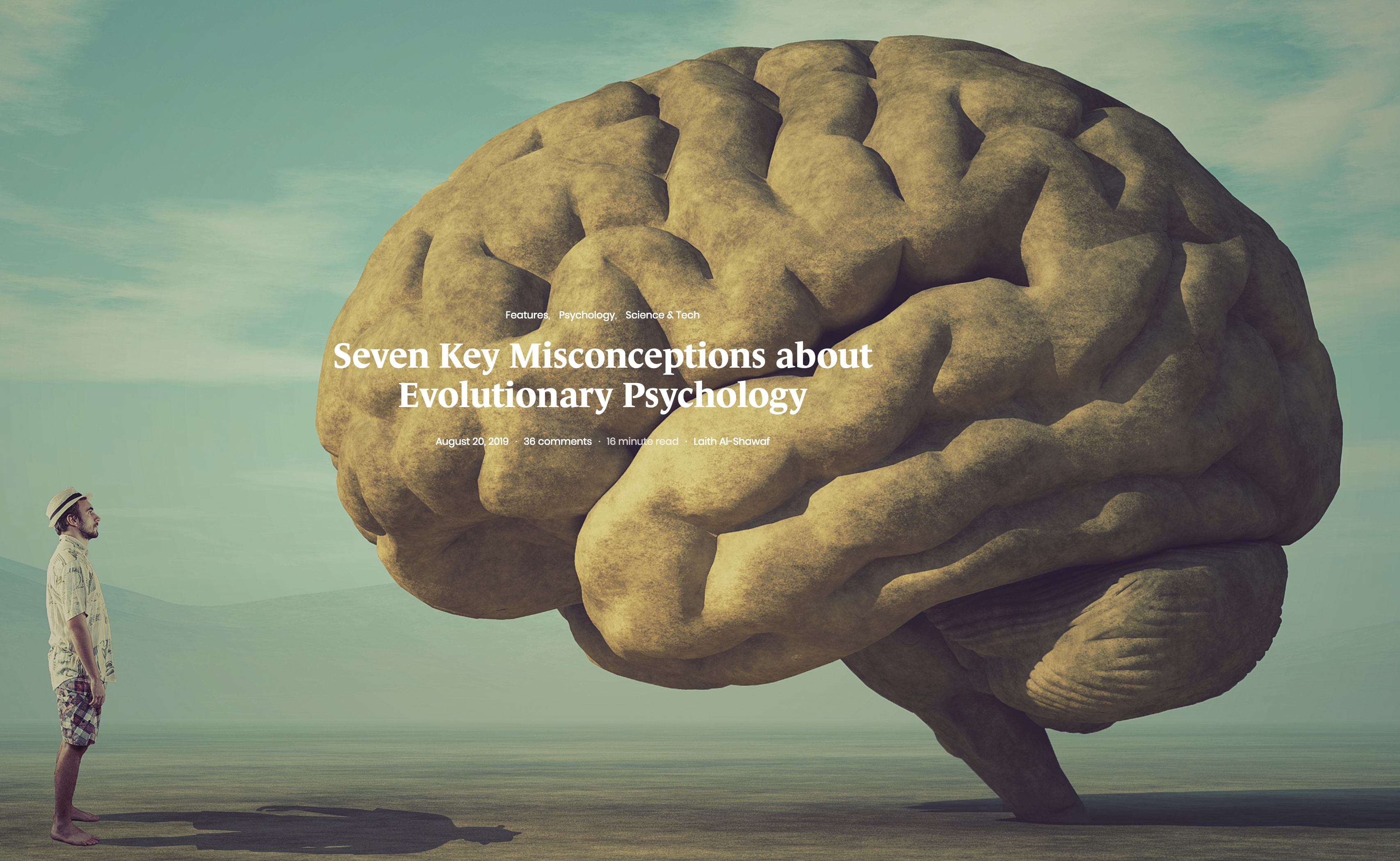 This is my “favorite” misconception, because it’s the one that you see non-biologists using most often when they want to take down evolutionary psychology. I haven’t read all the papers cited, but so be it.

Misconception 6: Evolutionary Psychologists Think That Everything is an Adaptation

This canard just won’t die—though it is tenable only if you read misinformed critiques rather than the actual primary literature in the field.

For example, here, here and here are three conceptual papers that explicitly reject the notion that all aspects of our psychology are adaptations. This paper on adaptations, exaptations and spandrels explicitly discusses byproducts at length. This paper thoughtfully addresses the question of how to carry out an exaptationist program in psychology. Here is an excellent study suggesting that racism is an evolutionary byproduct, not an adaptation, and that it can be erased. Here is a paper suggesting that the higher prevalence of sexual fetishism among men is a byproduct of their easier-to-cross thresholds of sexual arousal combined with their biased sexual learning mechanisms. Here is an example of two prominent evolutionary psychologists claiming that homicide is a byproduct, not an adaptation, and here are the same two researchers (along with a third co-author) claiming that uxoricide and filicide are also byproducts. Here, here and here are examples of researchers explaining religion and belief in supernatural agents as a byproduct of other mechanisms, such as agency-detection mechanisms that are biased toward false positives, theory of mind mechanisms and the attachment system. My colleagues and I recently submitted a chapter titled “The Products of Evolution” to a new handbook of evolutionary psychology, and, unsurprisingly, byproducts are a central part of the chapter.

The disparity between this criticism of evolutionary psychology and what evolutionary psychologists actually say in their published work is remarkable. The only reason it isn’t surprising is that there are many other examples of misrepresentations of the field—you can find some good examples of such misrepresentations here, here, here and here. . . .

Item #2. Colin Wright, who co-wrote the article on the sex “binary” in the Wall Street Journal that I recently mentioned, also had a related piece in Quillette about sixteen months ago. It’s more ideological, and deals with both Leftist criticisms of evolutionary psychology and their claim that the notion of men and women as distinct sexes is a social construct not supported by biology. I highlighted this 2018 article at length in an earlier post, but if you haven’t read it, I recommend it again. (Click on screenshot.) 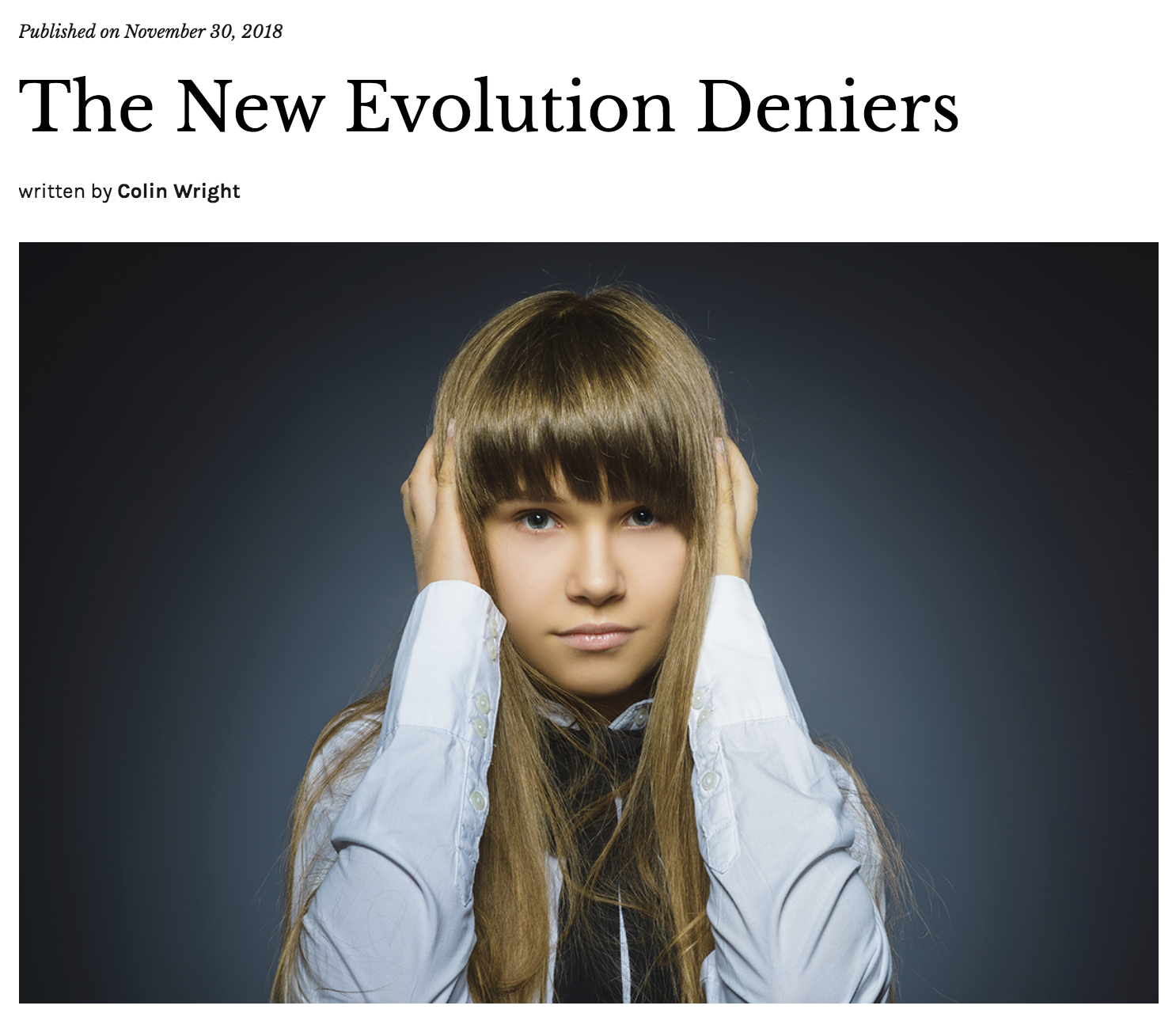 Finally, here’s a fairly new paper (a year old) that summarizes “psychological” differences between men and women, with an eye to explaining them as products of evolution. I have mixed feelings about this one: the stuff on sexual behavior is good, but that on other traits, like the greater “visuospatial ability” of men than of women (i.e., men better at mentally rotating objects and remembering the location of objects), is much weaker, with the differences falling into the category of “unsubstantiated adaptive stories.” Still,  as a summary of the literature on sex differences in psychology, be they evolutionary, cultural, or a combination, it’s a good resource. And access is free (click on screenshot):

Time for another zinc lozenge (75 mg/day)!