There is no rational excuse to have blasphemy laws on the books anywhere, yet, as I wrote in my Jesus and Mo foreword, they’re prevalent:

69 of the world’s 195 countries have laws on the books against [blasphemy], though in places the laws are vestigial and unenforced relics of an earlier time. But you can still be fined for criticizing religion in Italy, Brazil, Switzerland, Austria, Finland, and the Philippines, jailed in Germany, Poland, El Salvador, India, Finland, Ireland, India, Turkey, Morocco, and Algeria, and put to death in Saudi Arabia, Yemen, Afghanistan, Iran, and Pakistan.  That doesn’t count places where sharia courts can pronounce death sentences not enshrined in civil law, nor acts of murder committed by offended believers in countries like the Netherlands.

One of the most notorious blasphemy laws was in Ireland, as it was enacted in a Western country and was clearly on the books to protect the Catholic Church from being criticized. Grania used to complain about it at length, and I’m very sad she’s not here to celebrate the overturning of that law. Further, unlike “vestigial” blasphemy laws that are on the books but not enforced, Ireland’s was enforced, at least nominally. In 2017 I reported on how author and polymath Stephen Fry was investigated by the Irish police for simply criticizing religion in general (see the “incriminating” video here). The investigation was dropped, but only on the grounds that no identifiable party had complained.

At the time blasphemy was still a crime; as I wrote then:

Blasphemy [as the criticism of religion] is a crime in Ireland; the Constitution of 1937 (see here) says the following:

6. 1° The State guarantees liberty for the exercise of the following rights, subject to public order and morality:  i. The right of the citizens to express freely their convictions and opinions. The education of public opinion being, however, a matter of such grave import to the common good, the State shall endeavour to ensure that organs of public opinion, such as the radio, the press, the cinema, while preserving their rightful liberty of expression, including criticism of Government policy, shall not be used to undermine public order or morality or the authority of the State. The publication or utterance of blasphemous, seditious, or indecent matter is an offence which shall be punishable in accordance with law.

Wikipedia has a good article on the blasphemy law, its history, and its implementation in Ireland. The upshot is that it’s been contested, especially by the organization Atheist Ireland, and a referendum on the issue of blasphemy was proposed in 2014 but has yet to take place. No offenses have been prosecuted since 2009, but the law remains on the books.

The promised referendum was finally held in 2018, and voters rejected the law by a vote of 65% to 35%.  Atheist Ireland (of which Grania was once secretary) has an article on the repeal. (Click on screenshot. On the left is Michael Nugent, head of AI clad in his trademarked red polo shirt, but I’m not sure who the others are, though readers will certainly identify them for us.) Atheist Ireland was the most vociferous organization urging repeal of the bill, and its repeal took effect on January 1. They’re a happy group, and I congratulate them. 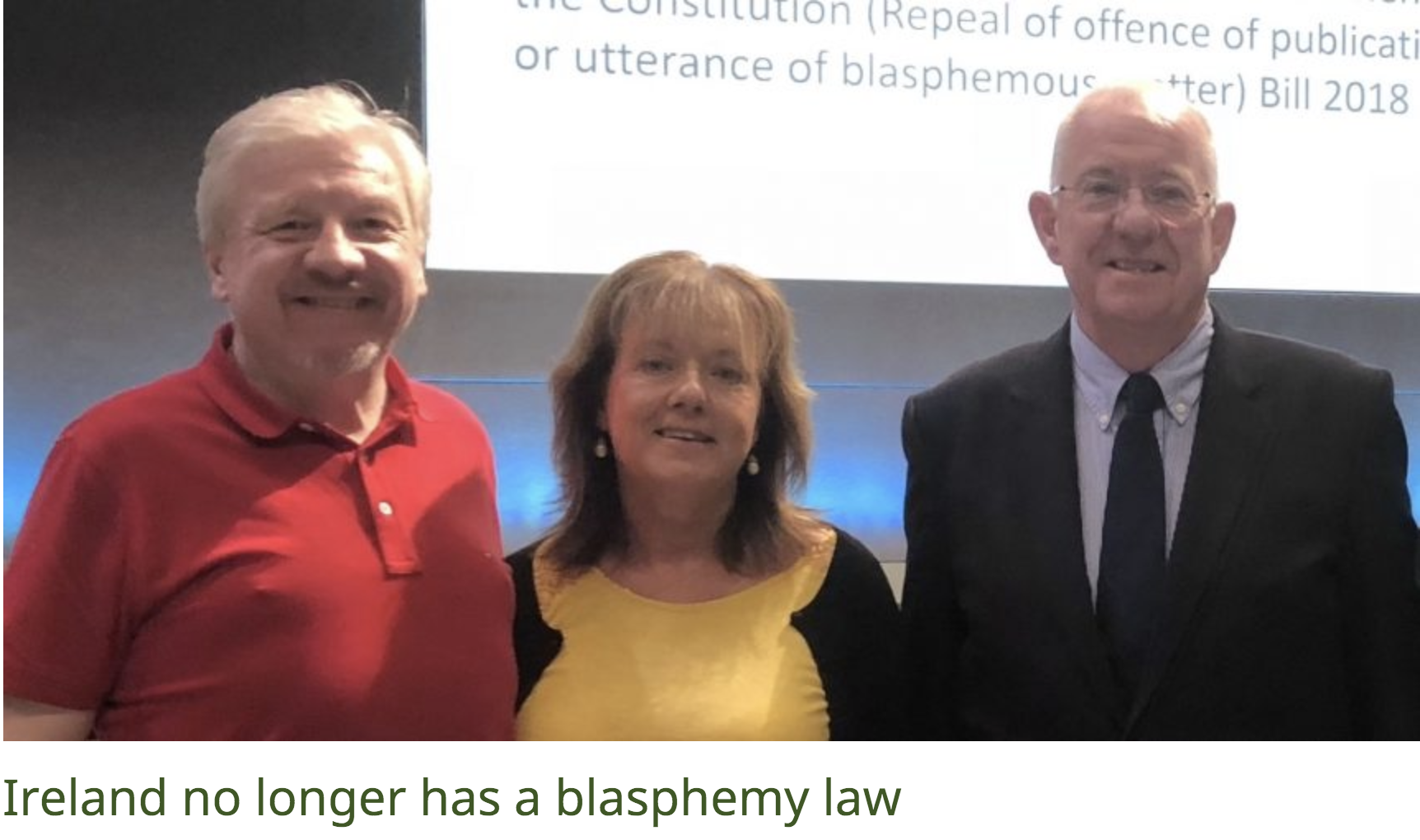 Here’s the organization’s summary of what was achieved:

The Blasphemy (Abolition of Offences and Related Matters) Act does three things:

So finally, after more than a decade of campaigning, we have removed the medieval crime of blasphemy from both our constitution and our statute laws. This means that:

Ireland was once a Catholic country. Today it is a pluralist country, which still has Catholic laws that we are gradually changing. Thank you to everybody who is helping to make this happen.

Here are the two articles which were just repealed: 36 and 37; note the emphasis on religion: 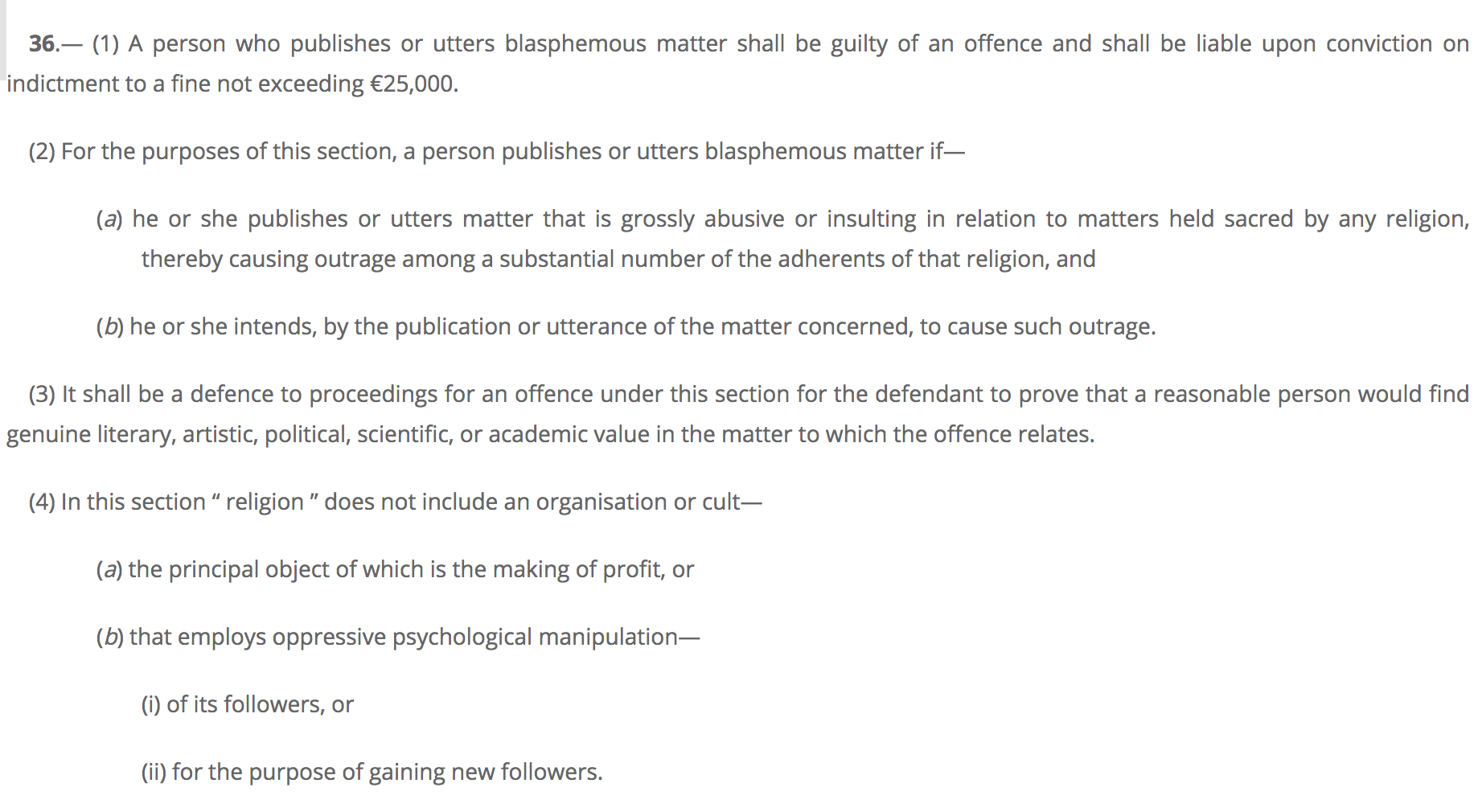 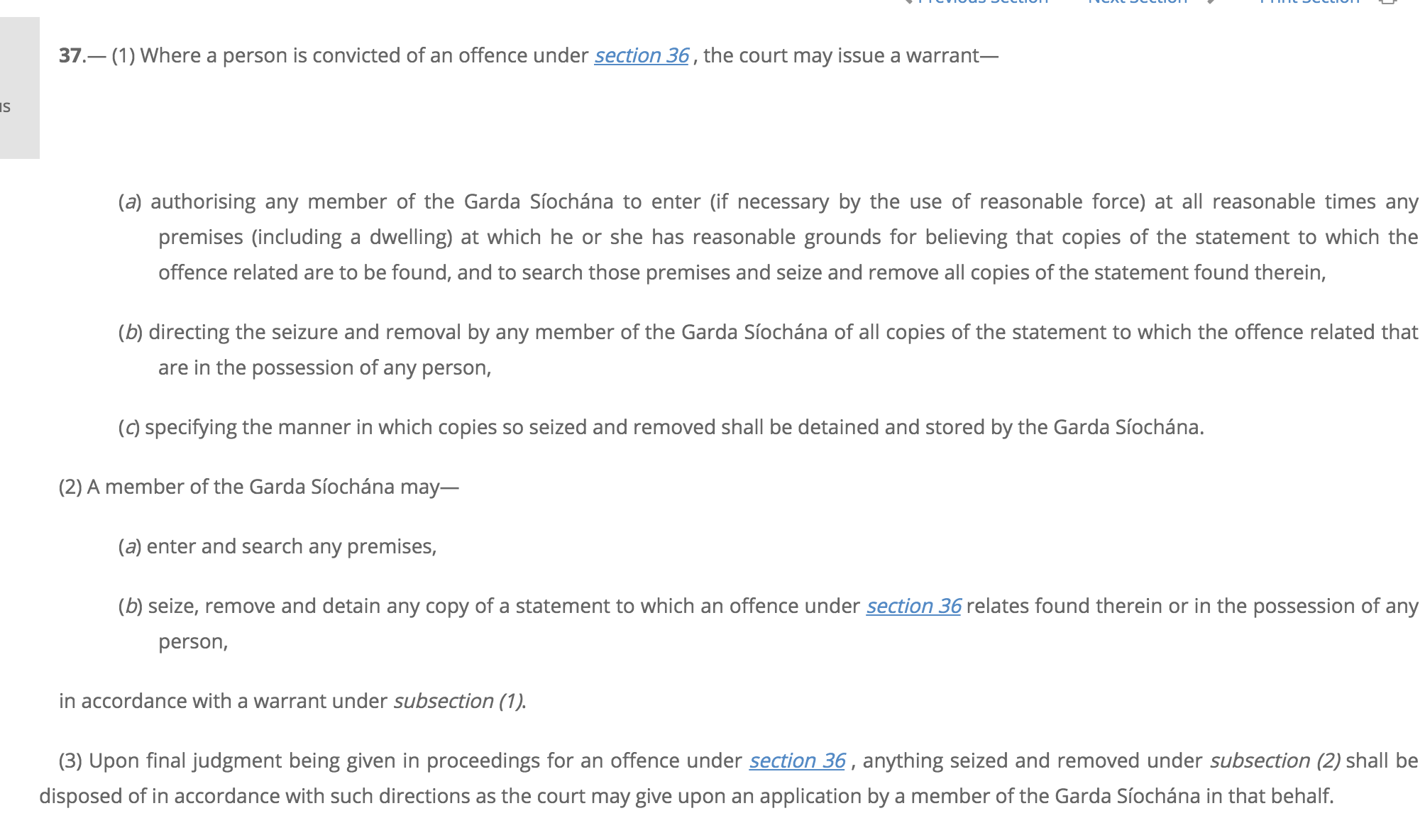 Hate speech is apparently still illegal in Ireland, but not “hate speech” that mocks religion. Note that “blasphemy” is defined as speech that is “grossly abusive or insulting in matters held sacred by any religion”, and so for a long time religion was singled out: one feature of a religious country. But The Prohibition of Incitement to Hatred Act, 1989 remains on the books, prohibiting speech that stirs up hatred against “a group of persons in the State or elsewhere on account of their race, colour, nationality, religion, ethnic or national origins, membership of the travelling community [the Roma] or sexual orientation.” (I’m not sure if the “religion” bit remains in there, but it’s superceded by the new repeal of the blaphemy law.) As of 2017, there had been five convictions for violating this Act.

Although this is a bit off topic, my own view is that there should be no laws prohibiting hate speech, save those adhering to the U.S. courts’ interpretation of the First Amendment that such speech can be illegal if it intends to and is likely to incite immediate violence. Hate speech laws are widespread, but not useful in an enlightened society since they are subject to a third party’s interpretation of what is considered “hateful”. For example, Holocaust denialism is illegal in 16 European countries as well as Israel, but I think it’s quite useful to have a public airing of arguments for and against the Holocaust—if for no other reason than that all of us should know that evidence to best defend the truth. And this needs to be done constantly, for each generation needs to learn the facts anew.

Hate crimes are something I’m still pondering, as I can see arguments on both sides about whether you should get an extra penalty for committing a crime motivated by hatred of a group rather than just a person. If you have views on that, please set them out in the comments.