Today we have a special feature: a video history of the “Downing Street Cats,” presented by Mark Felton Productions. These moggies include Larry, the current Chief Mouser to the Cabinet Office, the twelfth cat to hold this official government position at 10 Downing Street. But I’m also a fan of Palmerston, a tuxedo cat who’s the official Chief Mouser of the Foreign and Commonwealth Office nearby. Larry and Palmerston don’t like each other and have scrapped publicly in the past. This is shown in the video.

Ze Frank presents “Cats in therapy,” a feature I would have expected from the now-retired Henri, the Existentialist Cat. Various cats, recumbent on a couch, spill their issues to an unseen Cat Psychiatrist. The cats are cute and their problems are big. (There’s a D*gs in Therapy video, too, but I won’t present it here.)

On December 29 the BBC published a big article featuring four of Britain’s Commuter Cats—cats who either ride trains and buses or hang around the stations and become well known. I’ll show just two. One of them, Batman, who lives in Manchester, has been regularly seen by Matthew Cobb. Click on the screenshot to see the article:

So speaks the owner of Batman, a cat that helps to brighten the morning for commuters waiting at Chorlton tram stop in Manchester.

For more than two years the young rescue cat – named after his facial markings – has regularly trotted out of his front door, just down the road from the stop, to lap up strokes and adoration from strangers.

“It’s got to the point where he knows when the rush hours are,” explained owner Nicci Cuff.

Ms Cuff set up a Facebook page in her cat’s honour and soon began to realise many people considered Batman a lucky charm.

She said: “One person was going through a very hard time in their life and they said Batman saved their year.

“Someone else said they’d had a job interview and felt nervous but as soon as they saw Batman they knew it was going to be OK. They got the job.

“I said to a friend that I’d always wanted to make the world a better place but instead it’s actually my cat that’s doing it.”

All eyes were on Plymouth a decade ago when a bus-loving cat named Casper rose to prominence.

The black-and-white feline would trot on board the number three bus when it stopped outside his house each morning and then ride a full loop of the route before the driver carefully made sure he was dropped off back where he started.

His antics prompted national media coverage, an avalanche of letters to owner Susan Finden – who died in 2017 – and even his own book.

Susan’s daughter, Kim Holland, said: “Mum wrote the book and it had a massive response. It was one of the first of its kind – I know there are lots now but this was one of the early ones.

“From that people wrote to my mum for years. Some would address the letters to ‘Casper’s mum, Plymouth’ and the postman would deliver them all.”

The family was even contacted by a producer who wanted to make a film, with Dawn French mooted to play the part of Susan.

“He was super keen and kept in touch with mum for a long time and often discussed the film,” said Ms Holland. “He didn’t manage to get the funding so it sadly didn’t get off the ground.” 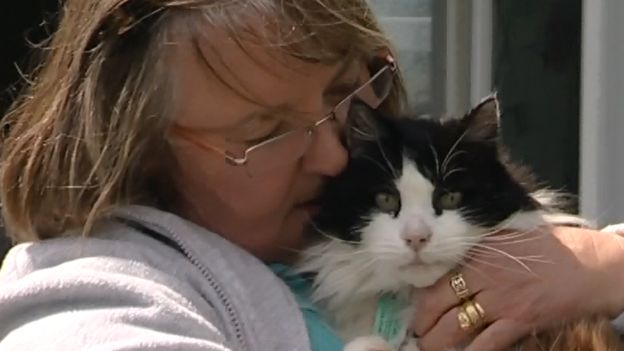 The curious thing about the article is that all four of the ambulatory cats are tuxedo cats! That cannot be a coincidence? Is wandering a pleiotropic effect of the coat pattern?

Lagniappe: A cat watches two guys smoking dope. Will it report them to the cops?